Ten years ago this month, my wife and I closed on the purchase of our house in a Charlotte, N.C., suburb – and the first thing we did, before we even moved in, was have the entire interior painted.

We had the job done again last year; we also bought a new front door and had that painted a steel-gray color that really pops against both the lighter, neutral colors of our hallway and the red-brick exterior. 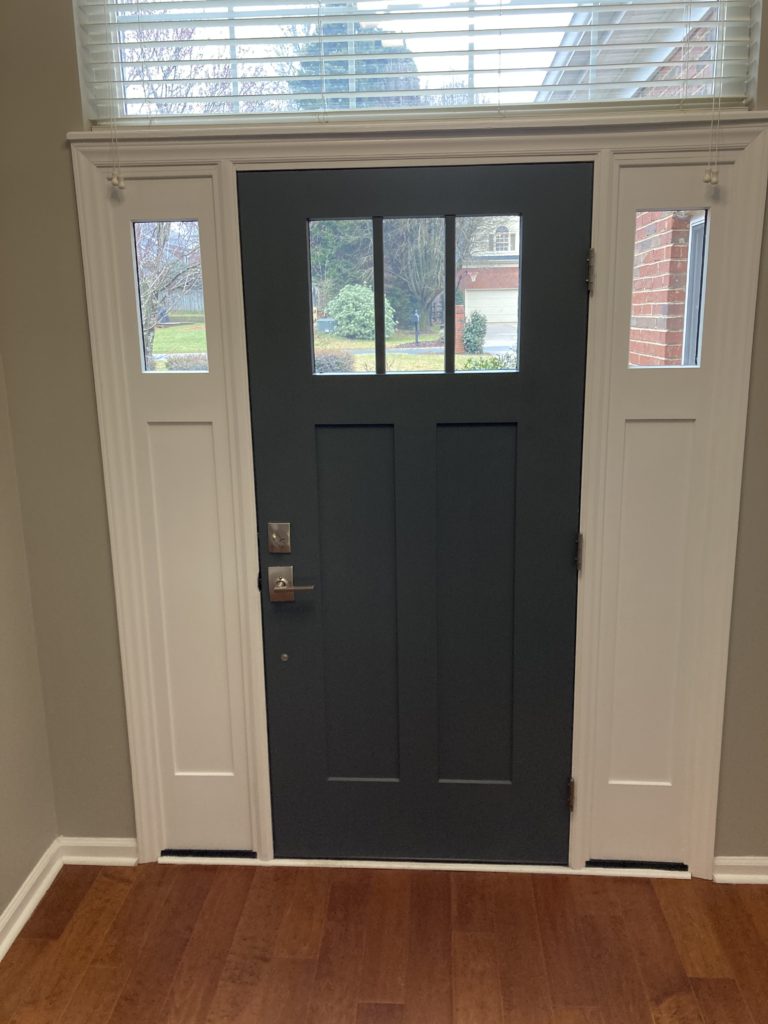 Each time, the professionals who did the work insisted upon using Sherwin-Williams (SHW) products — the best of the best.

And because I like selecting the best for DTA’s Income Builder Portfolio, the world’s No. 1 paints and coatings company is my latest IBP pick.

On Monday, Feb. 8, I will execute a purchase order on Daily Trade Alert’s behalf for about $1,000 worth of SHW.

Given that I’ve been building up existing positions rather than adding to the portfolio, Sherwin-Williams will be the first new stock to enter the IBP in nearly three months. It also will be our first component from the Materials sector.

When I said Sherwin-Williams was No. 1 in its industry, it was not hyperbole or opinion. It was a matter of math — or, to be precise, a matter of billions of dollars. 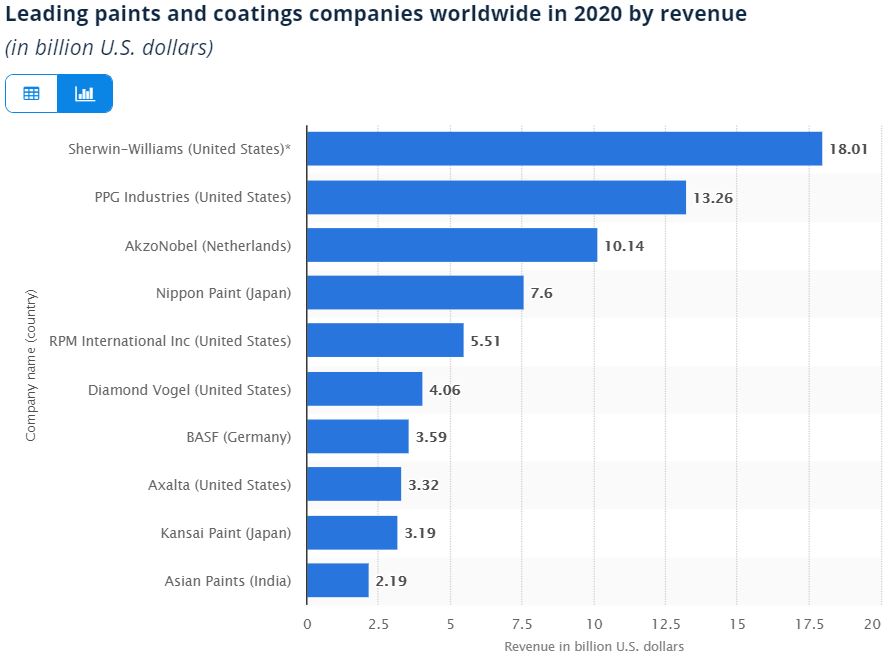 2020 was another outstanding year for the company, as the global COVID-19 pandemic kept people at home — and doing projects around their houses.

As the following slide from Sherwin-Williams’ Jan. 28 earnings presentation shows, fourth-quarter adjusted EPS was up 19.2% year-over-year, profit grew 12.4% and sales were up 9.1%. 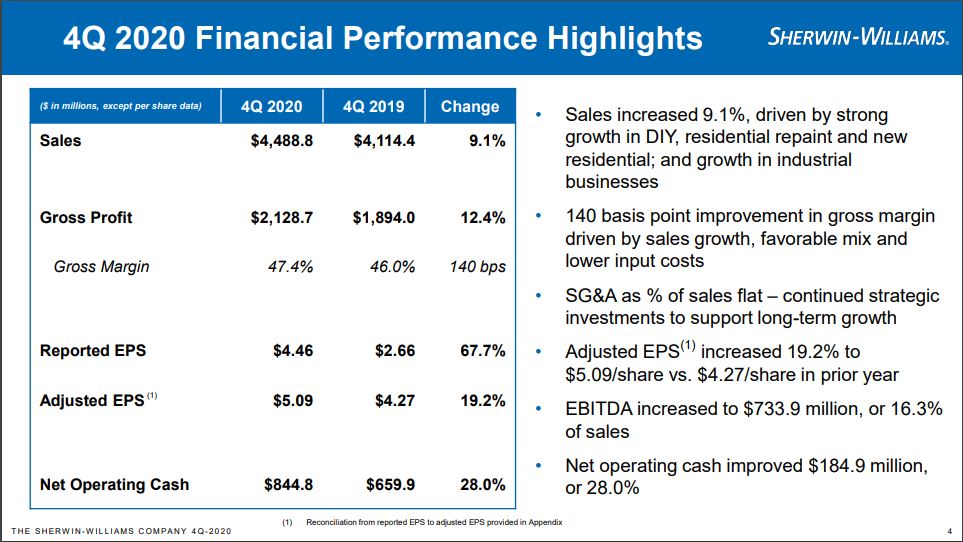 SHW operates in three segments, and each has done very well: The Americas Group, with 24.3% YOY profit growth in Q4; Consumer Brands Group, up 43.8%; and Performance Coatings Group, up 15.3%.

The following three slides from the company’s 2020 investor presentation serve as a snapshot of each segment. 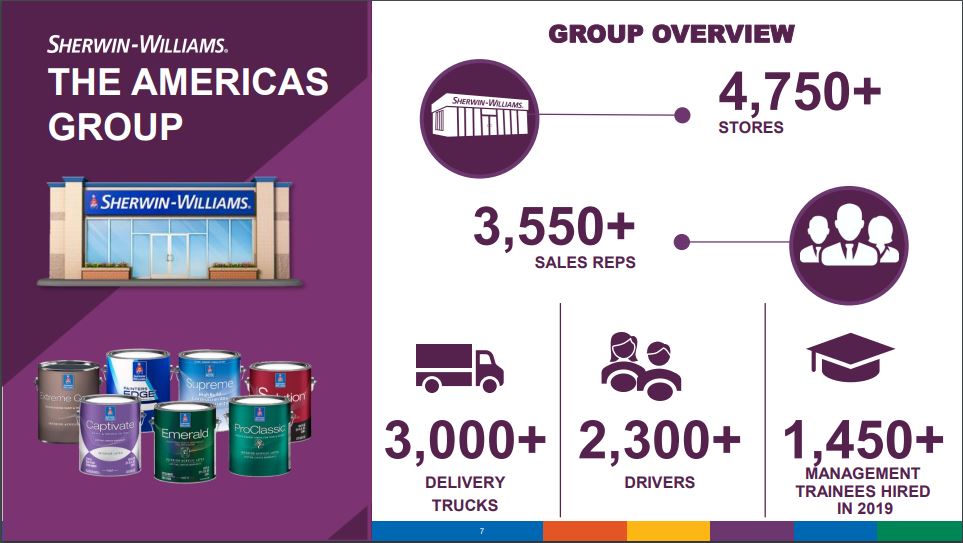 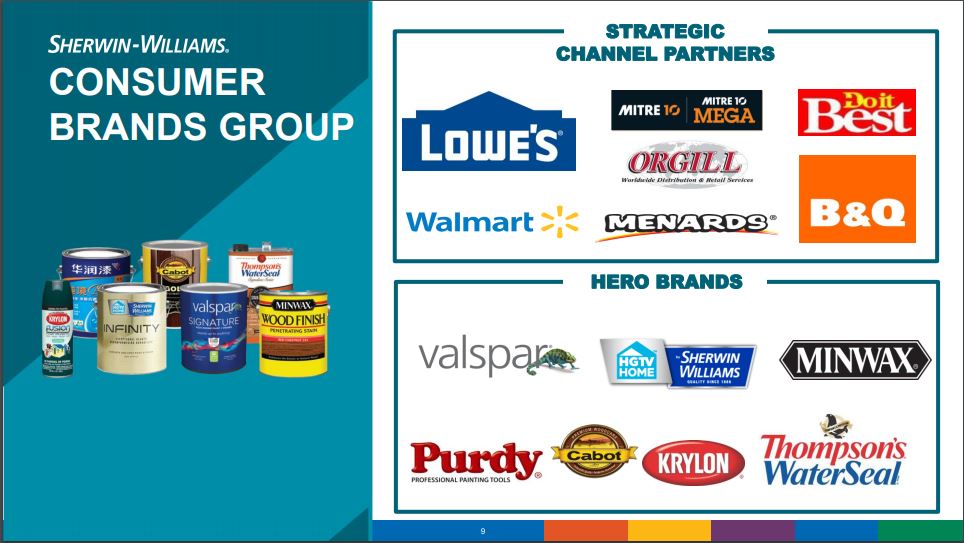 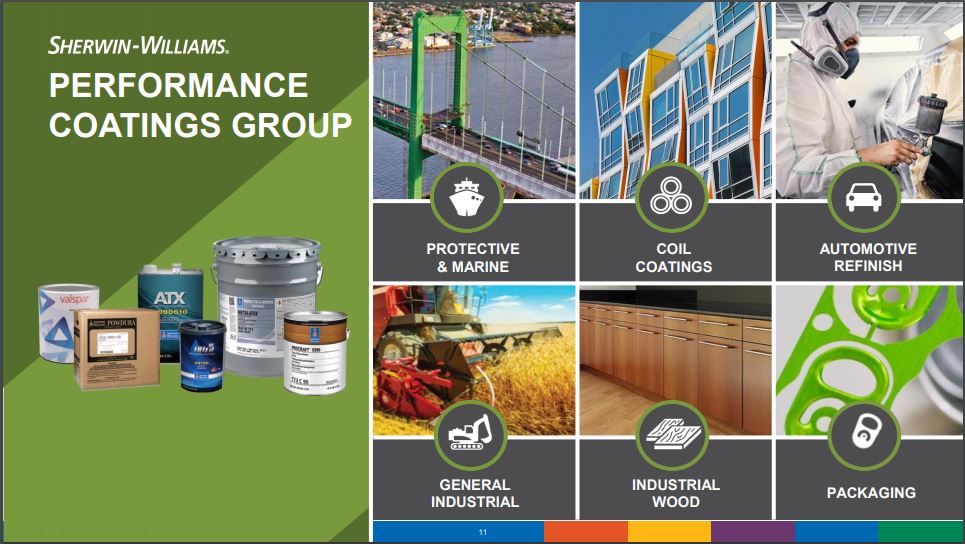 Given the performance of each segment, and of the company as a whole, it should not be too surprising that SHW had much higher total return in 2020 than the overall market — even though the market had an incredible year.

Sherwin-Williams’ slight loss in the first half of the year mirrored that of the S&P 500 Index, but SHW really took off in the summer and into the fall. 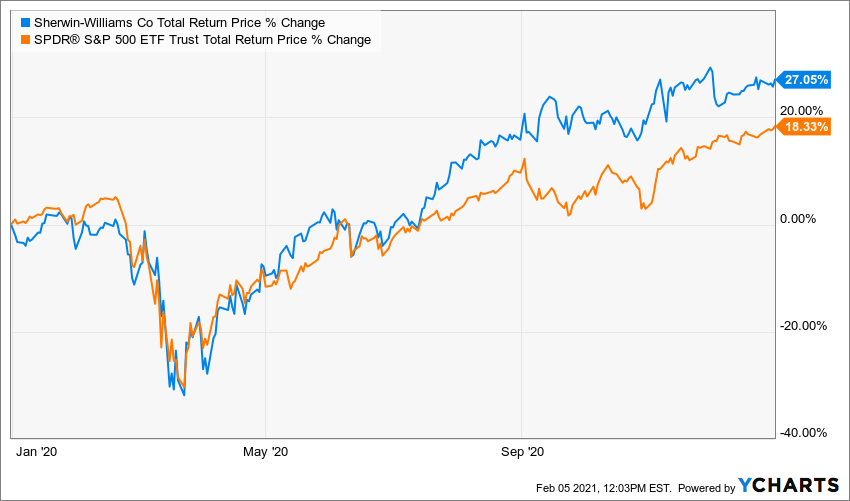 Some “experts” didn’t see that coming.

For example, Standard & Poor’s said this on April 24 when announcing it was downgrading Sherwin-Williams:

We anticipate that the economic downturn, related to the global COVID-19 pandemic that is underway, will hurt earnings at Sherwin-Williams. … We are lowering our issuer credit rating on the company to BBB- from BBB.

I get the logic … but SHW ended up making S&P look silly. Earnings were great, and those who sold their shares on April 24 missed out on 42% total return. Ouch!

That relatively low (but still investment grade) BBB- credit rating is the only mediocre score on my “quality metrics” table for SHW:

Value Line has put Sherwin-Williams in some very good company, listing it as one of 30 “Low-Risk Stocks with High Return on Equity” and also among its 100 “Highest Growth Stocks.”

On the latter list, it is one of only 10 to receive Value Line’s top “safety” rating. After buying SHW on Monday, the IBP will own 5 of those, the others being Apple (AAPL), Mastercard (MA), Microsoft (MSFT) and UnitedHealth Group (UNH).

As well as Sherwin-Williams did in 2020 (and earlier), investors always must look toward the future, and the company is forecasting healthy growth in both profits and sales. 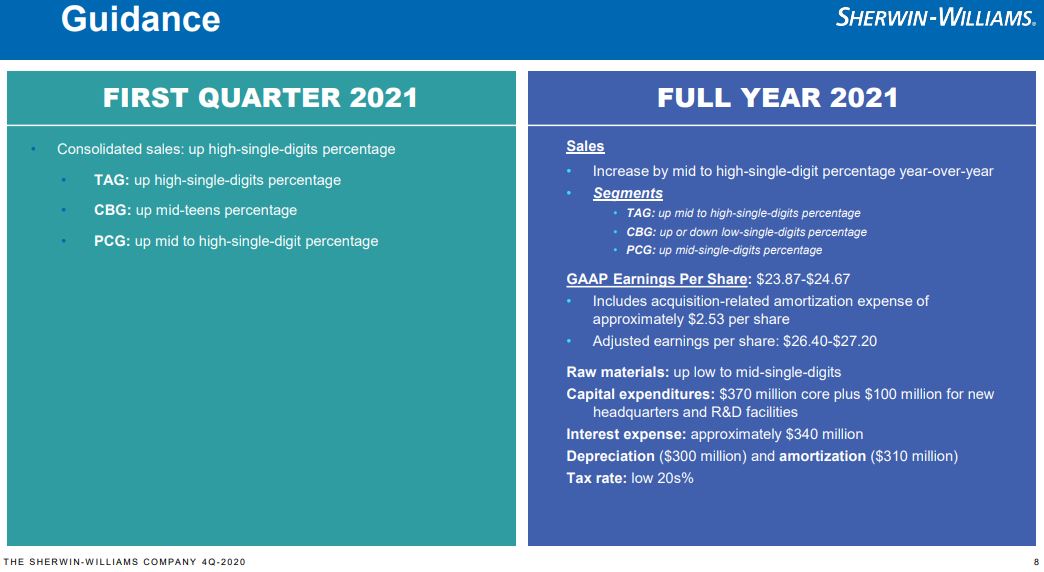 Sherwin-Williams charges a premium for its paints. Of painting contractor costs, 80%-90% is labor and just 10%-20% is paint, so contractors are not especially price-sensitive about paint costs. … Paint is not a commodity to professional painters, so they purchase high-quality products. Sherwin-Williams paint is well known in the industry for having desirable characteristics, including coverage (fewer coats needed), durability (lasts longer), cure time (less waiting time), and ease of application.

We believe the professional segment will continue to expand share, creating a larger market for Sherwin-Williams. Professional painting benefits from demographic tailwinds. The professional painter share has increased from 40% of the industry two decades ago to approximately 60% of the $7 billion U.S. paint market today. Residential repainting makes up two thirds of paint volume. Homeowners view repainting as a low-cost, high-return way of increasing the value of their home, especially before selling the property.

Older homeowners tend to hire professional painters’ services. As the share of homeowners who are 60 and older has increased from a third in the 1980s to around 40% today, the professional painter has taken a greater share of the market. We believe this demographic trend will continue over the next decade due to the aging Baby Boomer population, with the 60-and-older segment growing to 46% by 2024. Sherwin-Williams is well positioned to take advantage of this trend.

My wife and I are, indeed, Baby Boomers. And we certainly love the way our house looks after it was painted with Sherwin-Williams products.

A Dividend Aristocrat, Sherwin-Williams has grown its payout to shareholders for 42 consecutive years. 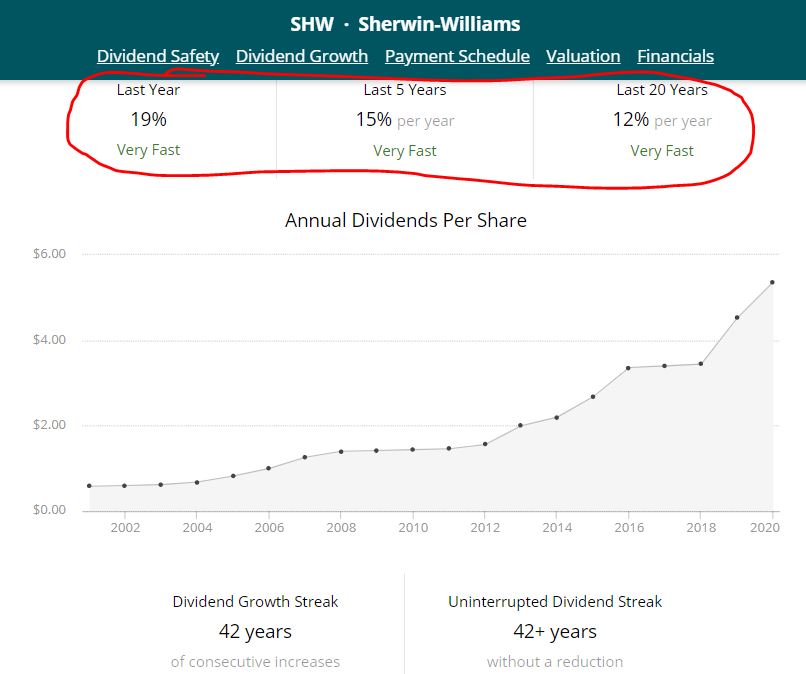 One thing I really like in the above graphic from Simply Safe Dividends is the trend (circled in red): 12% annual dividend growth over the last 20 years; 15% over the last 5 years; 19% this past year.

Even with all that growth, however, SHW yields less than 1% — in great part because the stock price keeps going up!

Perhaps the biggest argument against buying shares of Sherwin-Williams now is that it is trading near its all-time high.

As has been the case with many of the Income Builder Portfolio’s 37 holdings, however, one often has to pay a premium for quality. And there is little doubt that Sherwin-Williams is a high-quality — and high-performing — company.

I will take a thorough look at SHW’s valuation and other pertinent information (including the recently announced 3-for-1 stock split) in my post-buy article, which is scheduled to be published on Tuesday, Feb. 9.

As always, we strongly recommend that investors conduct their own due diligence before purchasing any stocks.