We also added shares of booze and cannabis seller Constellation Brands (STZ), another company whose products are strictly regulated.

Each of those three businesses can be directly and significantly impacted by the U.S. government, which is now led by President Joe Biden and Vice President Kamala Harris. 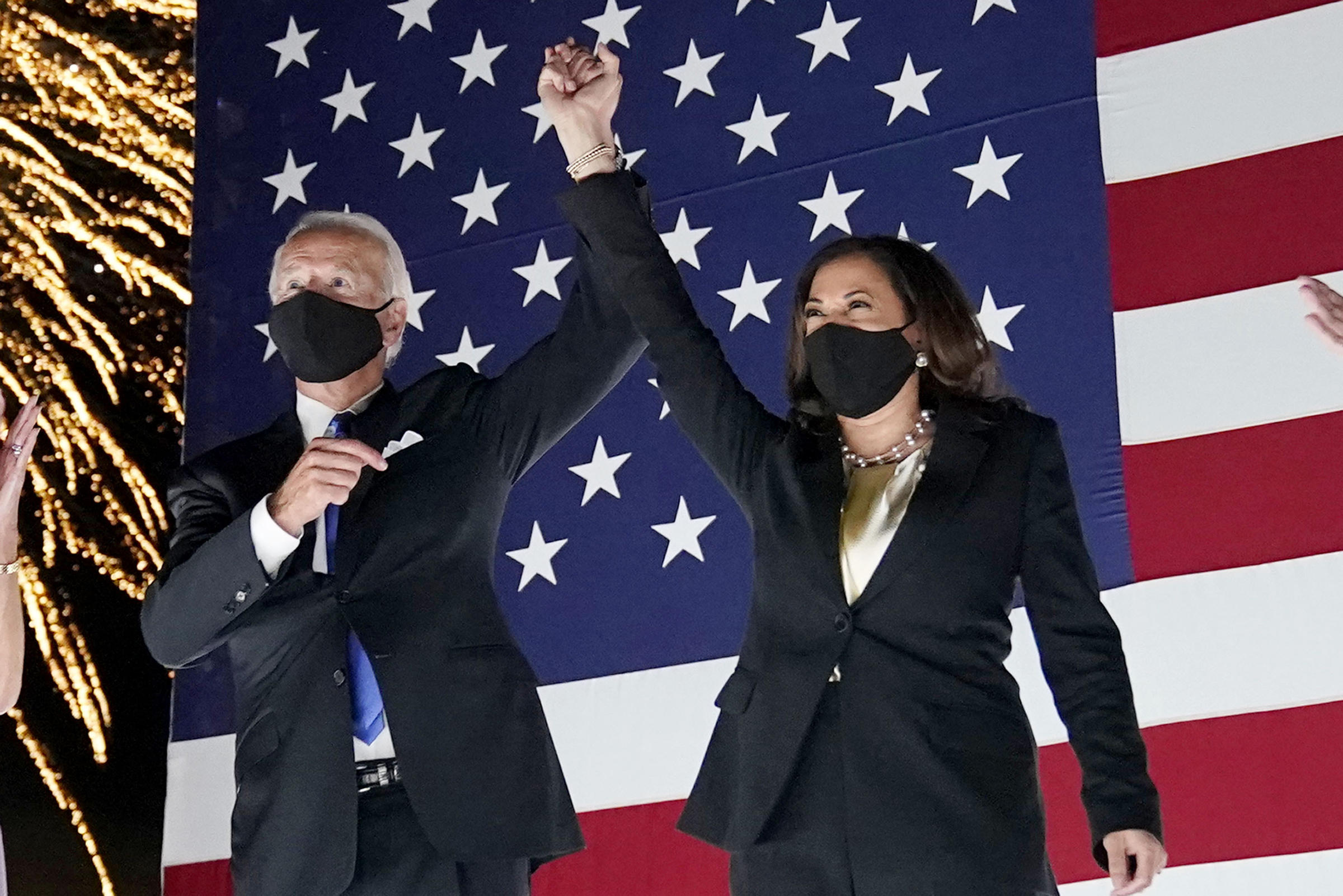 In addition, both houses of Congress are controlled by Democrats, putting that party in charge of the legislative and executive branches for the first time in 11 years.

Some investors worry about that kind of thing … even though, historically, the economy has performed very well when the country is run by Democrats. 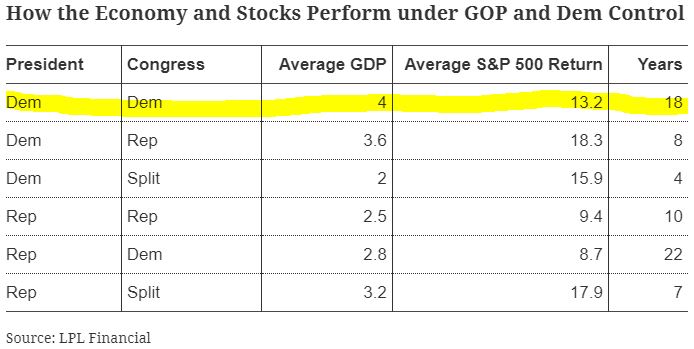 Frankly, even if history didn’t support the Dems’ case, I wouldn’t worry about it very much.

I mainly select high-quality, dividend-growing companies, hold them for years, and let them do their thing.

That philosophy has served me well during my years as an investor. And it has carried over into how I manage the IBP, which I have been building for Daily Trade Alert since January 2018. (See our entire 37-stock portfolio HERE.)

On Monday, Jan. 25, I executed purchase orders totaling about $1,100 to add to our existing positions in Constellation, BlackRock and JPMorgan.

I discussed some of my reasons for choosing these companies in my previous article. The dividends they pay rank high on the list.

These purchases added $23.57 to the IBP’s expected annual income production (orange area of the table below). The three companies will combine to bring in more than $187 in dividends over the next year, about 7% of the portfolio’s total (green area).

Simply Safe Dividends gives BLK a near-perfect safety score of 98, and it recently upgraded STZ into the “safe” zone at 70. JPM gets a more cautious “borderline safe” 60, SSD said, citing “the Fed’s control over big banks’ dividend policies and the uncertain shape of this recession.”

The IBP will get a nice little pay day from BlackRock on March 23, as the quarterly dividend was just raised 14% to $4.13.

That means $22.88 will come into the portfolio, and the cash automatically will buy about .03 of a share more BLK.

That dividend reinvestment process, mandated under IBP rules, is informally known as “dripping.”

JPMorgan pays its next dividend on Jan. 31. Our most recent purchase came after the Jan. 5 ex-dividend date, so the IBP will receive .90 for each of the 14.7908 shares we had before this buy. That $13.31 will be reinvested, buying about .1 of a share of JPM.

That’s how our income stream — $2,637 strong and counting — gets built, and that’s why we gave our project such a clever (and accurate) name.

Using surveys conducted by TipRanks and Reuters, we see that a majority of analysts believe that all three of these companies are worth buying.

For BlackRock, the two services polled 23 analysts, with 20 calling BLK either a Buy or Strong Buy. TipRanks’ 12-month consensus target price of $832 is 16% higher than what we just paid to add onto the IBP position.

Value Line has included BlackRock in its portfolio of “Stocks with Above-Average Dividend Yields,” and also put BLK on its list of 100 “Highest Growth Stocks.” It is the only company on that list with both a 2% yield and a safety score of 2 or better.

In addition, Morningstar has BlackRock in its “Dividend Select Portfolio.”

A combined 47 analysts surveyed by TipRanks and Reuters have weighed in on JPMorgan Chase, with 32 rating the company a Buy or Strong Buy. Each does list 2 analysts who say to Sell the stock.

TipRanks’ $149 target price for JPM is 14% higher than the price we just paid.

JPM is included in Value Line’s portfolio of “Stocks for Income and Potential Price Appreciation,” as well as Morningstar’s “Tortoise Portfolio.”

Constellation is covered by 36 analysts in the two surveys combined, with 26 calling it a Buy or Strong Buy.

TipRanks has an average target price of $253 for STZ — 12.5% higher than what we paid to add to our latest IBP stake.

The following table shows some additional valuation metrics and analysts’ targets for the three companies.

Green shading indicates the most favorable valuation-related numbers; the yellow-shaded fields are the least attractive.

We’ll finish our valuation view with a look at the FAST Graphs illustrations for each company.

Each has a “blended price/earnings ratio” that is higher than its 10-year norm, indicating possible overvaluation.

However, BLK, JPM and STZ are expected to grow earnings nicely over the next three fiscal years (see yellow highlights on each graph), suggesting they can grow into their valuations. 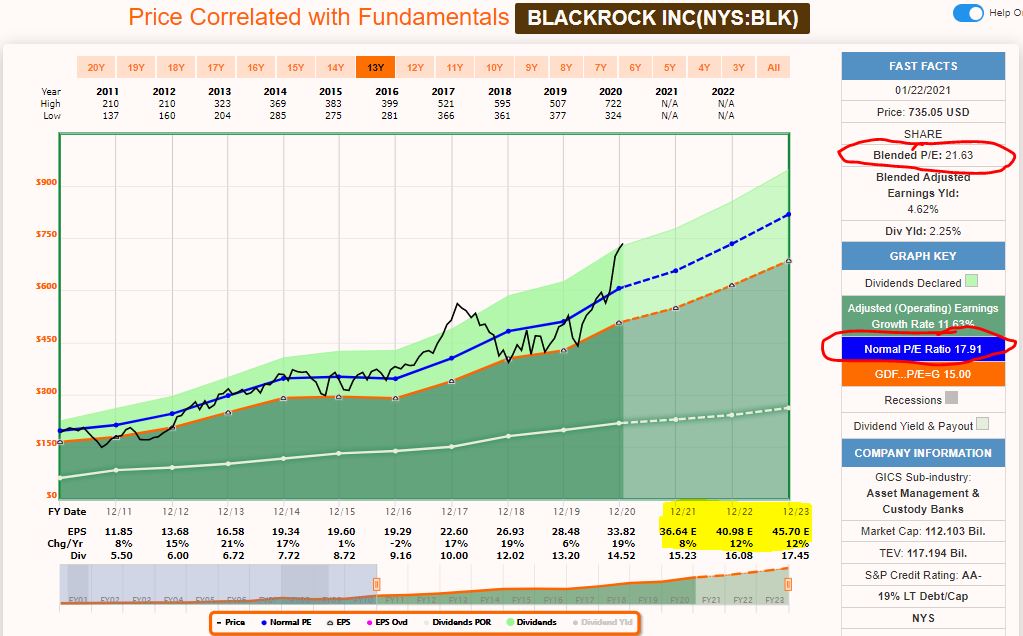 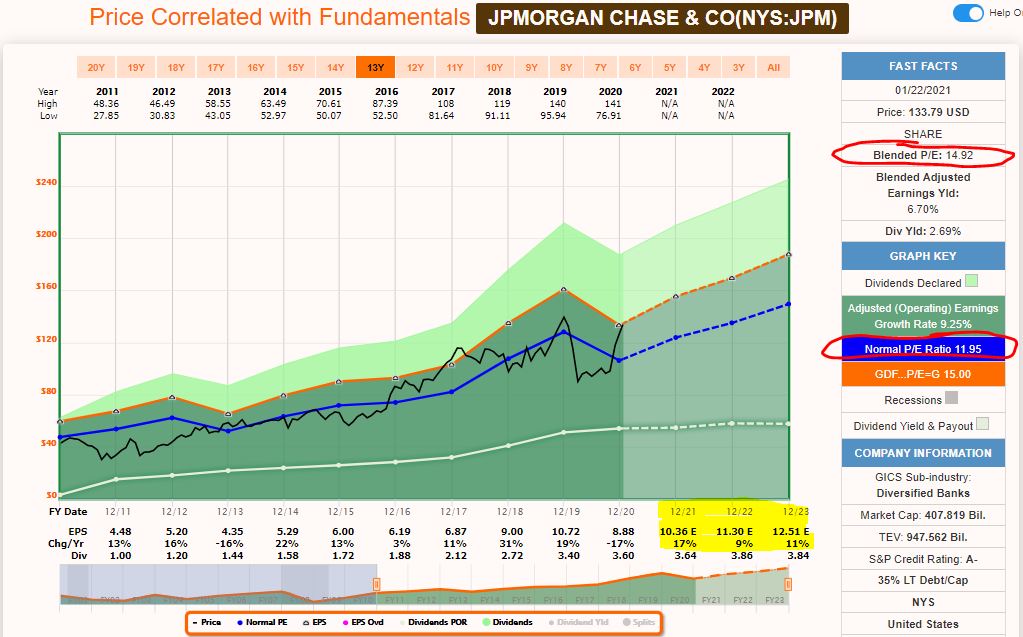 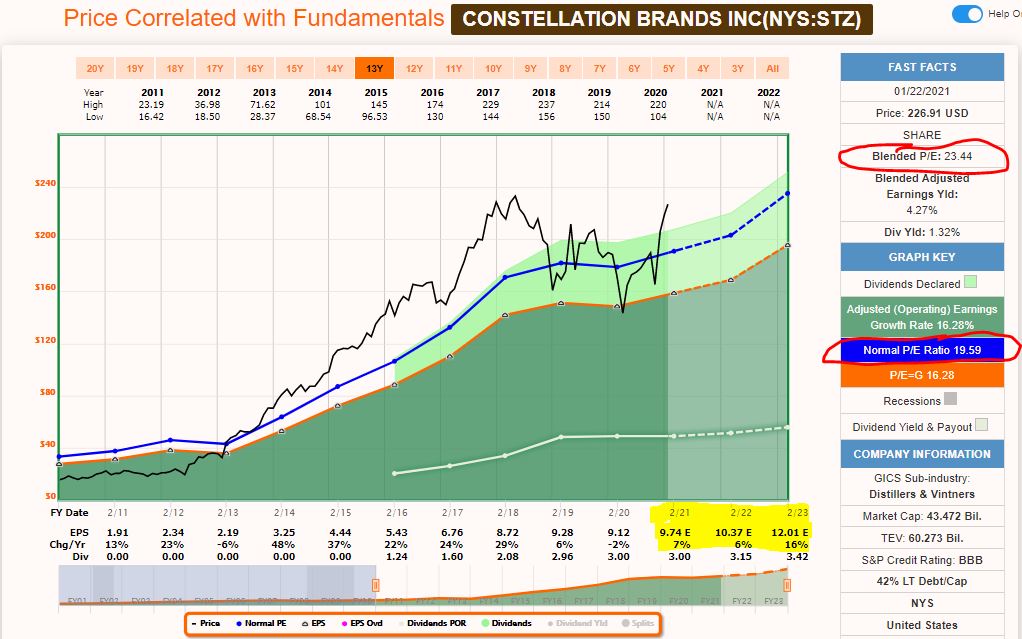 Whether the government has been run by Democrats, Republicans or some combination, these three companies have performed well over the years.

BlackRock and Constellation have been amazing since the turn of the century. And despite the Great Recession, which devastated the banking industry in 2008-09, JPMorgan also has experienced better total return than the overall market. 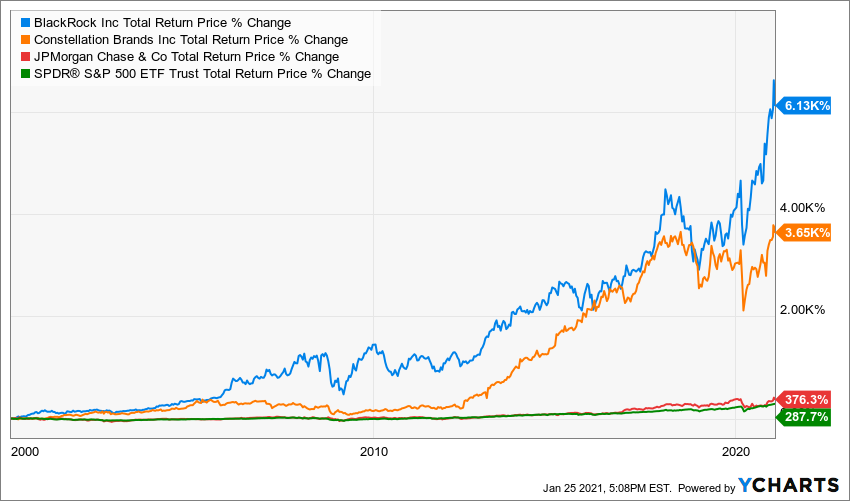 So you can see why I don’t worry too much about politics or other “noise.”

What I worry about is the quality of the companies I select, both for my personal account and for the Income Builder Portfolio.

Constellation also has been one of the top performers in the other public, real-money portfolio I am building, the Grand-Twins College Fund.

See all 17 of the GTCF’s holdings HERE. And keep an eye out for my January update, which is scheduled to be published on Feb. 2.