Many investors equal-weight their portfolios … and I get why they do it.

But if you let a half-dozen each become 10% of your portfolio, and two of those go kaput, you’ve lost 20%.

The same theory can apply to Dividend Growth Investing.

If two companies eliminate their dividends in an equal-weight portfolio, an income stream would be less likely to be devastated than if a couple of large positions were to deliver unkind cuts.

I guess my main question would be: What kind of research are you doing on the buying end that would let you choose multiple companies whose failures could result in portfolio disaster?

And my follow-up question would be: Don’t you monitor your holdings regularly to prevent calamity?

Which brings me to my strategy on weighting the Income Builder Portfolio, the real-money project I’ve been putting together for Daily Trade Alert for 3 years now.

My basic philosophy is the same as it is for my personal portfolio: I let the winners run.

In 2018, the IBP invested roughly the same amount of money in Apple (AAPL) and Altria (MO) … and to say the two have performed differently would be a major understatement. 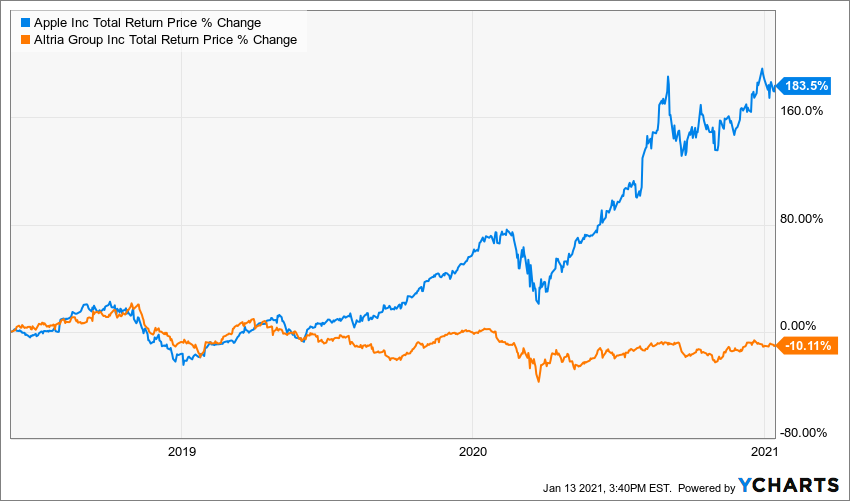 One might ask why I keep Altria in the IBP, and that’s a legitimate question.

To me, it’s a lot more legit than asking why I’d sell a bunch of Apple just because it’s grown to make up 6.4% of the portfolio or buy a ton of Altria just because it only has 1.6% representation now.

Some folks do rebalance their portfolios that way, though, and that’s cool. Every investor should operate in a way that makes him or her most comfortable and most confident in success.

This brings me to the IBP’s latest buys: On Wednesday, Jan. 13, I executed purchase orders for 4 shares of General Dynamics (GD) and 13 shares of Reynolds Consumer Products (REYN); the combined cost of the transactions was $991.25.

Each transaction occurred in two buys a nanosecond apart, which sometimes happens with limit orders.

In my previous article, I discussed my reasons for selecting GD and REYN. Within that piece, I said:

So I wanted to raise the position’s share count, as well as the income it produces. …

I also will use some of DTA’s $1,000 semimonthly allocation on Reynolds … as I try to build up the IBP’s smaller positions.

Even though I like letting the winners run, I am cognizant of the fact that we have invested quite a bit more money into some positions than we have in others.

I selected the portfolio’s 37 holdings, and I want to show confidence in each by building up its share count. I want to give each a chance to perform well, both in income production and total return.

So while I have no plans to keep investing DTA’s money into General Dynamics and Reynolds until each is worth as much as our Apple position is, I do believe that as long as I “like” each company, I should be willing to bring each up in size.

The Income Builder Portfolio now owns 15.2155 shares of GD, one of the world’s largest defense and aerospace companies. Since last April, we have made three buys totaling $2,114.

The IBP has 46 shares of REYN, which makes Reynolds Wrap, Hefty trash bags and other popular consumer products. We have invested $1,362 in it so far.

The newly purchased shares of GD and REYN will add about $29 to the IBP’s annual income stream. Combined, the positions are expected to generate approximately $108 in dividends over the next year — roughly 4% of the portfolio’s $2,602 total projected income.

The General Dynamics buy came in just before the company’s ex-dividend date — which is today — meaning that our entire position will earn the $1.10 quarterly dividend that will be paid on Feb. 5.

That $16.74 payment will be reinvested right back into the company, as required by the IBP’s rules, and will buy about 1/10th of a share of GD stock. (That process is informally known as “dripping.”)

But wait … it gets better. General Dynamics has increased its payout in the second quarter for 29 straight years, and recent raises have been quite generous, so there’s every reason to believe the May dividend will be higher.

Factoring in the larger 15.32-share position (as a result of the February “drip”), the May payment would be $17.77, which again would be reinvested.

As for Reynolds … although its iconic products have been in kitchen cupboards for decades, the stock only went public about a year ago. So it’s more difficult to predict exactly what the dividend policy will be.

Using the above information as a guide, I’d expect another .22/share dividend to be announced soon. That would bring the IBP $10.12, which would be automatically reinvested into REYN stock.

Eventually — hopefully this year — Reynolds will follow the lead of most other U.S.-based dividend-paying companies and establish a 4-times-per-year schedule. If so, I could see the next dividend being paid in February, setting up a February-May-August-November timetable.

Until management gives better guidance on all of this, I will not count on another increase in 2021 … but maybe there will be a pleasant surprise.

Analysts are all over the map on General Dynamics, though slightly more than half of the 20 surveyed by Reuters rate GD either a Strong Buy or Buy (as opposed to Hold or Sell).

There are far fewer analysts following market newcomer Reynolds, but most are bullish.

The red circle and yellow highlight show that the one analyst who was predicting REYN would underperform upgraded his or her forecast in the last week.

The following table gives a look at what several other analysts think about the two companies.

The asterisks next to REYN metrics in a couple of categories means those analytical firms use computer-driven “quant” estimates because they do not have humans following Reynolds yet.

Value Line believes Reynolds can show 20% to 90% price appreciation over the next 3-5 years.

Meanwhile, General Dynamics gets favorable calls from most of the analysts, with CFRA’s Colin Scarola saying this to explain a 12-month target price that is 33% higher than what we just paid:

Our Strong Buy reflects a positive long-term outlook due to GD’s strong brands, high barriers to entry, a healthy environment for its defense and government (D&G) segments, and undervaluation. The D&G segments (79% of sales) will grow throughout the pandemic and over the long-term, in our view, earning at least $9 per share in 2021. Using the historical average P/E valuation for pure-play D&G firms (18.5x), this yields a valuation of $167, 11% above GD’s current price without accounting for its Gulfstream business.

A look at FAST Graphs suggests General Dynamics is at worst fairly valued, as its current “blended P/E ratio” is slightly below its 10-year norm. I used yellow highlighter to show that GD’s earnings are expected to accelerate once the global COVID-19 pandemic is contained. 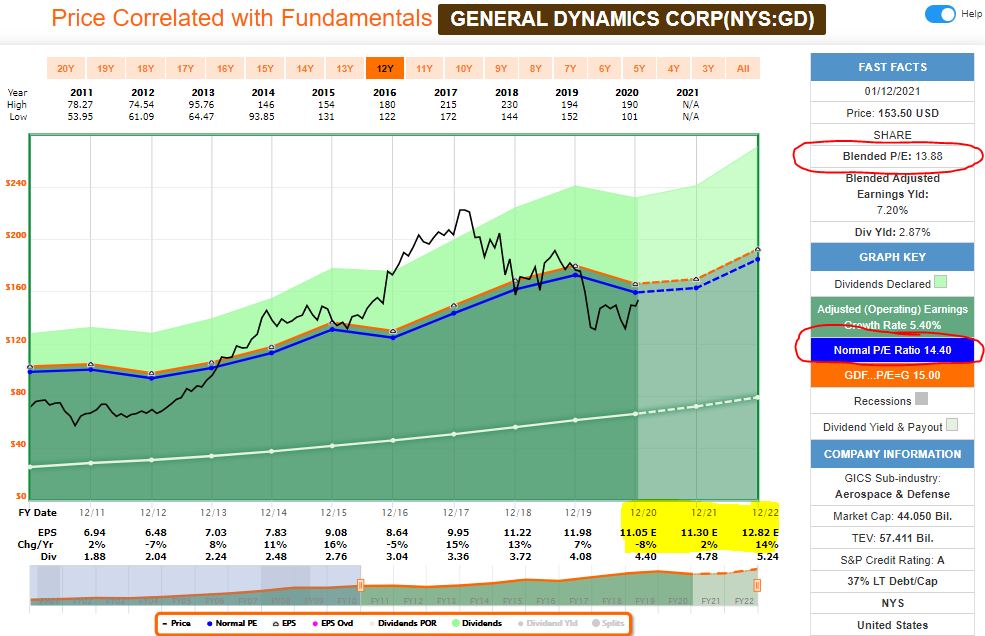 Because Reynolds has been public for such a brief period, I do not believe its FAST Graphs image gives investors much useful information yet.

General Dynamics becomes the 25th Income Builder Portfolio component to have had approxmately $2,000 (or more) put into it, and Reynolds no longer is at the bottom when it comes to allocated dollars.

In the not-too-distant future, maybe even before 2021 is over, I want to have put at around 2 grand into every position.

Bottom line: If I don’t have enough confidence in an IBP holding to commit $2,000 to it, we probably should sell it and invest the proceeds into one I like better.

To me, that concept is very different than rebalancing just for the sake of rebalancing.

NOTE: For those interested in a “growthier” kind of portfolio with an income kicker, I offer my other public, real-money project, the Grand-Twins College Fund — HERE.