During my decades as an investor, I have found it best to ignore political “noise.”

For example, Republicans warned in 2008 that if Barack Obama stepped foot in the White House, the Great Recession would continue unabated for years and years.

Democrats cautioned in 2016 that a Donald Trump presidency would bring about a market crash so horrific we’d remember the Great Recession as the “good old days.”

If you haven’t made big-time bucks during these last dozen years, you are such a bad investor that you might want to consider burying all your cash in a hole in your backyard. 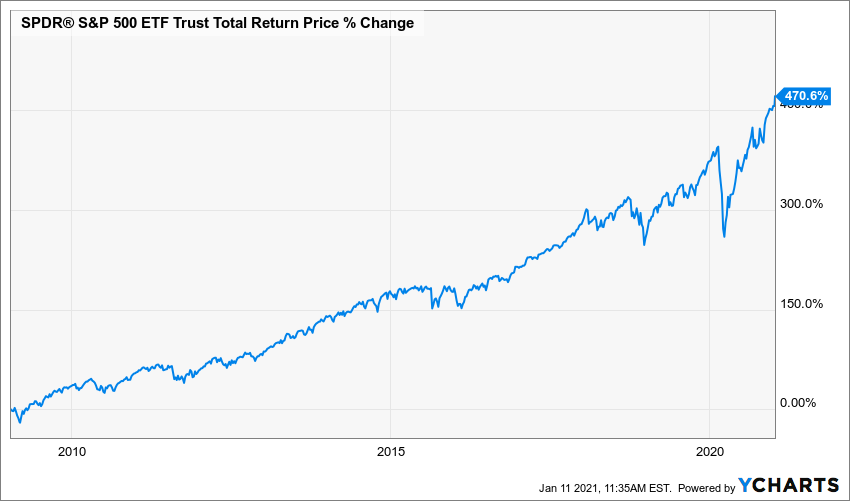 And speaking of political noise …

There are those who believe investors in defense stocks such as General Dynamics (GD) are in trouble now that Joe Biden, a Democrat, will succeed Trump.

The thinking, apparently, is that Republicans want to protect America from its enemies while Democrats don’t care if Russia, China, North Korea and Iran nuke us until we’re crispy.

Well, even though facts often are frowned upon when it comes to political discourse on the interwebs, I’m gonna get all fact-y anyway: General Dynamics has performed markedly better over the last quarter-century when Democrats have occupied the White House.

It’s not only GD, either. Lockheed Martin (LMT), Northrup Grumman (NOC) and other defense companies also have outperformed during Democratic presidencies.

But I’m talking primarily about General Dynamics here because it is one of my next selections for DTA’s Income Builder Portfolio.

Come Wednesday, Jan. 13 — one week before Biden’s inauguration — I will execute a purchase order on behalf of Daily Trade Alert for several shares of GD stock.

I also will use some of DTA’s $1,000 semimonthly allocation on Reynolds Consumer Products (REYN), as I try to build up the IBP’s smaller positions. 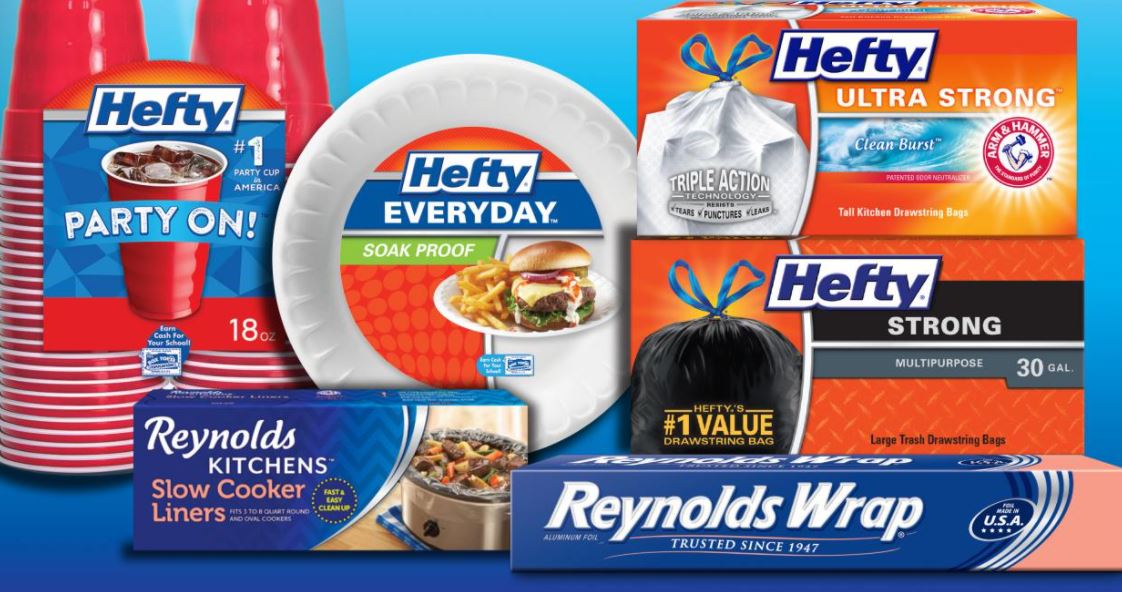 Given that we recently added Reynolds to the portfolio (and wrote about it HERE), and given that most of the money in the upcoming transactions will go toward General Dynamics shares, I’m going to focus on GD in this article.

We already bought General Dynamics twice for the IBP, initiating the position on April 7, 2020, and then adding to it the following month.

So I wanted to raise the position’s share count, as well as the income it produces.

When I first selected GD for the Income Builder Portfolio back in April, I explained why — HERE.

Most of the reasons I stated in that article still apply, but I do want to update a few relevant matters.

General Dynamics’ most recent earnings report, presented on Oct. 28, was very encouraging, showing gains across the board in most metrics despite the global COVID-19 pandemic. 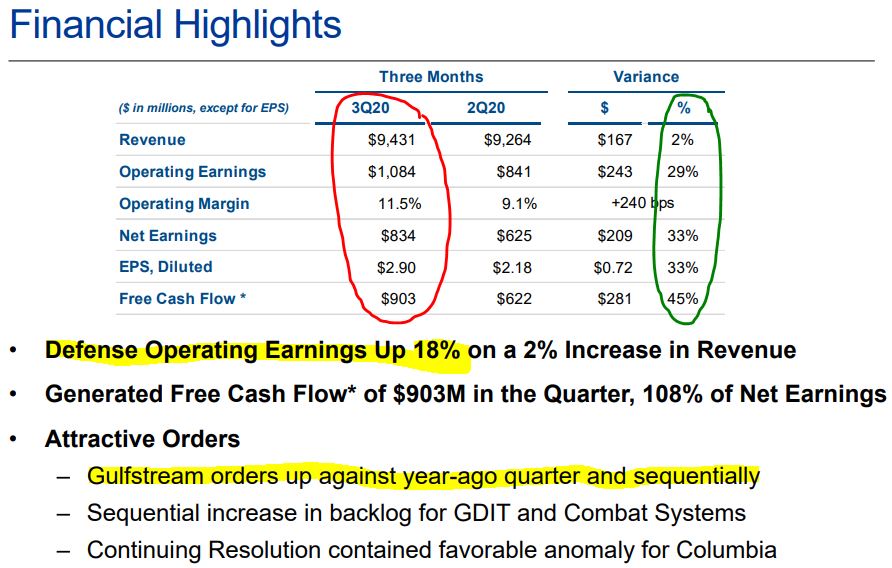 I was especially glad to see that orders were rising again for the Gulfstream segment (which GD calls Aerospace), because commercial air travel has been one of the industries that has been hit hardest by the pandemic.

Defense makes up about 75% of GD’s business, and it is divided into four segments: Combat Systems, Information Technology, Mission Systems and Marine Systems.

Each of those segments showed year-over-year earnings growth, with IT really standing out. 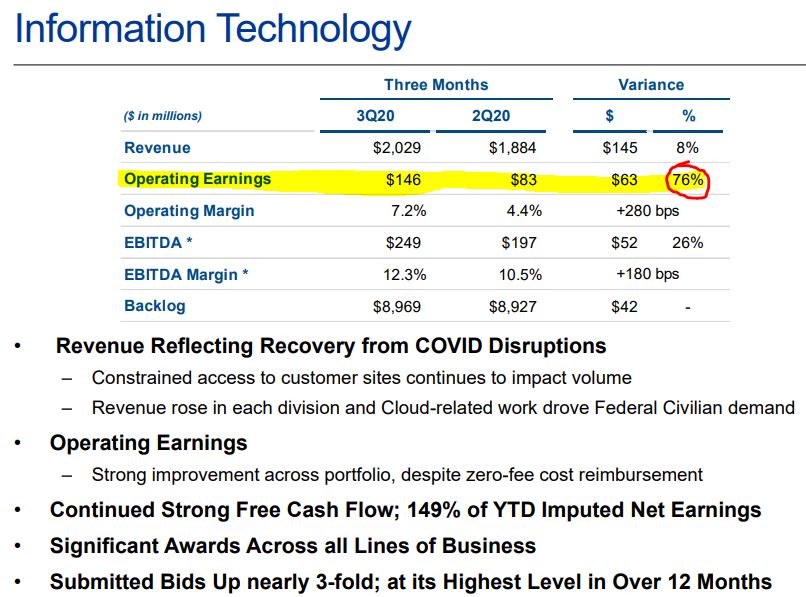 The division recently was awarded a $241 million contract to provide cloud services and software tools to the U.S. Department of Health and Human Services.

That’s nice, but it’s only a fraction of the $4.6 billion contract GD’s Combat Systems segment just landed to produce Abrams battle tanks for the U.S. Army. 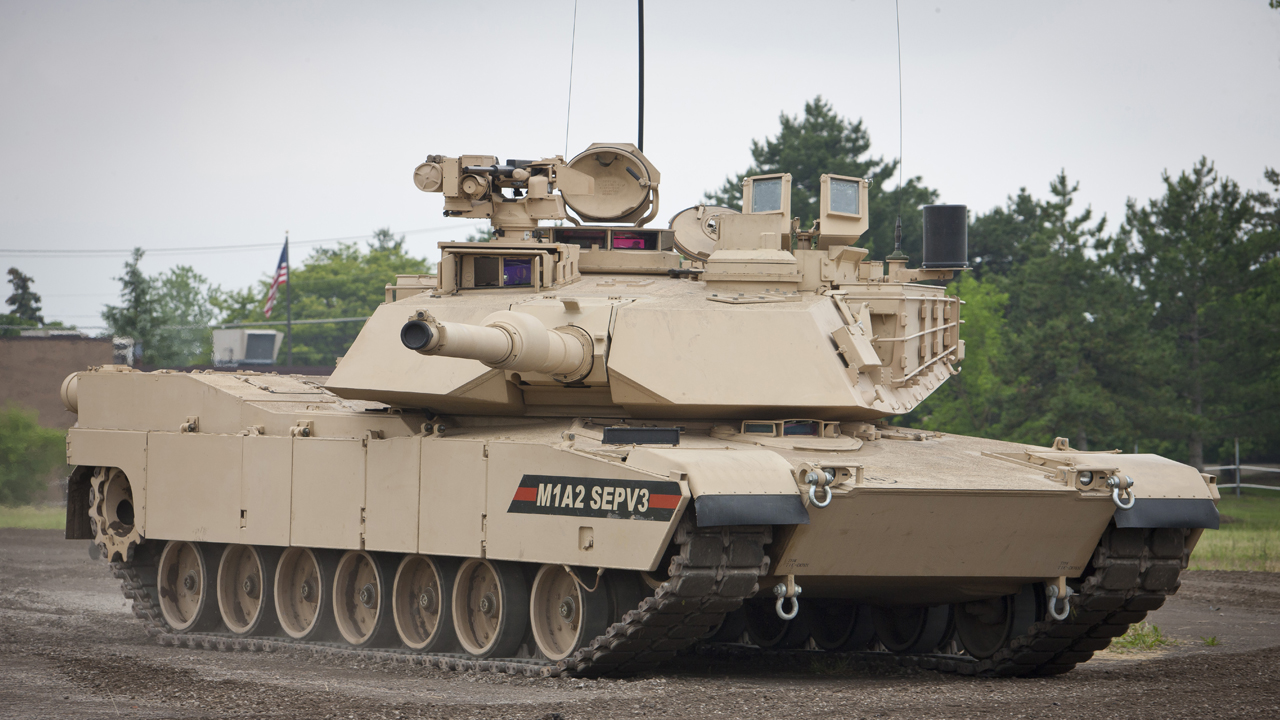 A couple months back, GD landed huge contracts to build Columbia class submarines for the U.S. Navy, and enterprise office solutions for the Department of Defense.

The strength of GD’s business is illustrated nicely in the following “Financial Sonar” from Jefferson Research: 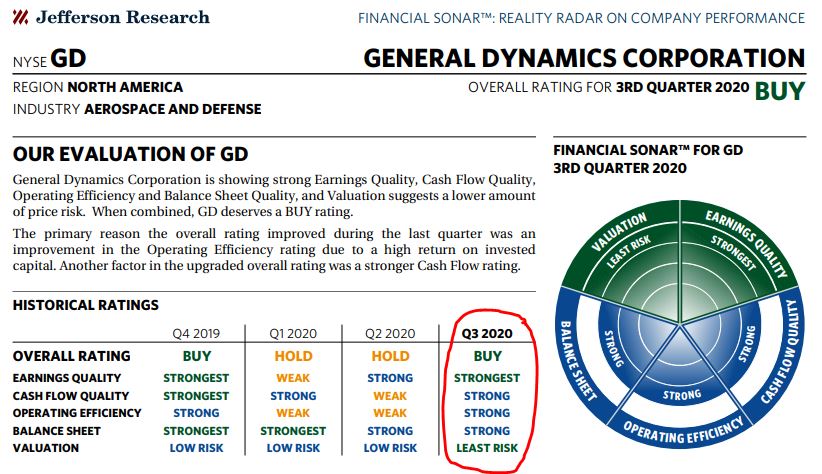 A reliable dividend is another sign of quality. General Dynamics has been growing its payout to shareholders for 29 consecutive years, through recessions, wars and the pandemic.

GD has a dividend yield of around 2.9%, as does Reynolds — which only became a public company about a year ago.

We must be able to protect our great democratic republic, no matter which party is in charge. That’s why I like to put companies such as GD (and Lockheed Martin) in the Income Builder Portfolio.

Both General Dynamics and Reynolds appear to be attractively valued, and that’s hard to find in today’s sky-high market scenario.

I will write more about valuation in my post-buy article, which is scheduled to be published on Thursday, Jan. 14.

Note: I also manage a real-money, “growth-and-income” portfolio, the Grand-Twins College Fund. It has stakes in 16 companies, as well as a “disruptive innovation” ETF. Check out the GTCF home page HERE.