Whether screaming like banshees, bouncing off the furniture, racing from one toy to another, laughing uncontrollably, whining about something, banging on pots and pans or taking part in other hijinks, little kids sure can be disruptive. 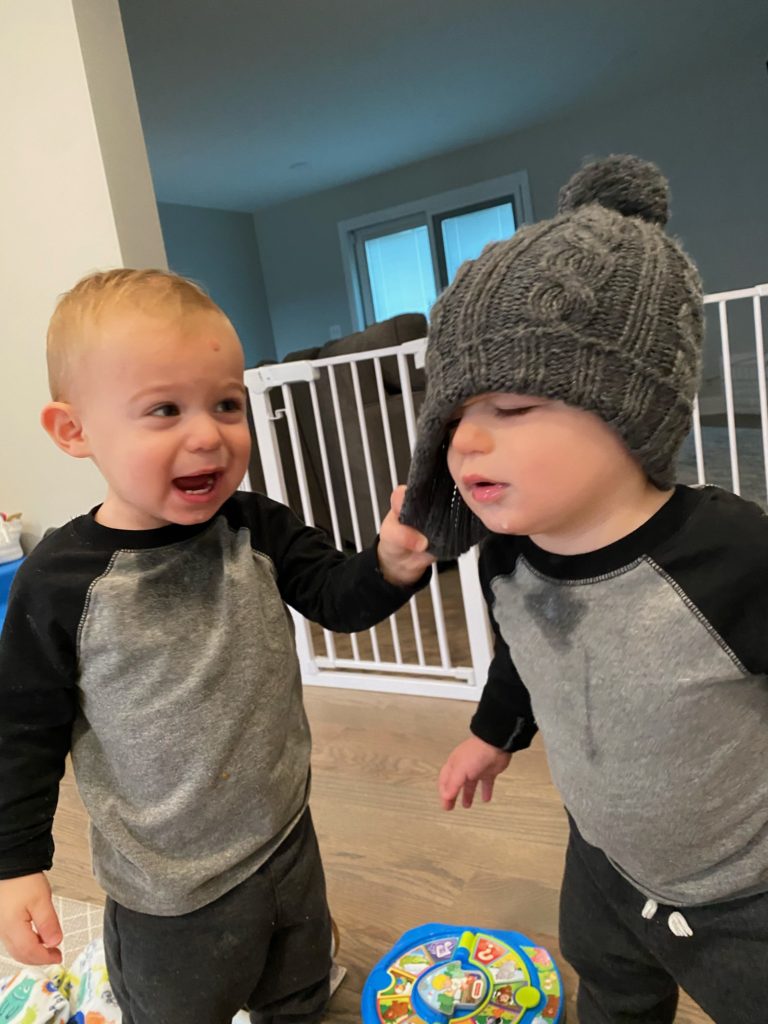 So it’s fitting that a kid’s investment portfolio include some “disruptive” stocks — companies whose business models threaten to turn the economy on its head in the coming decades.

And now I’ve taken the portfolio’s disruptive holdings to a whole ‘nother level.

Using both my monthly contribution and a gift from the twins’ Cousin Owen, I executed a purchase order on Dec. 31 for about $136 worth (just over 1 share) of ARK Innovation ETF (ARKK). 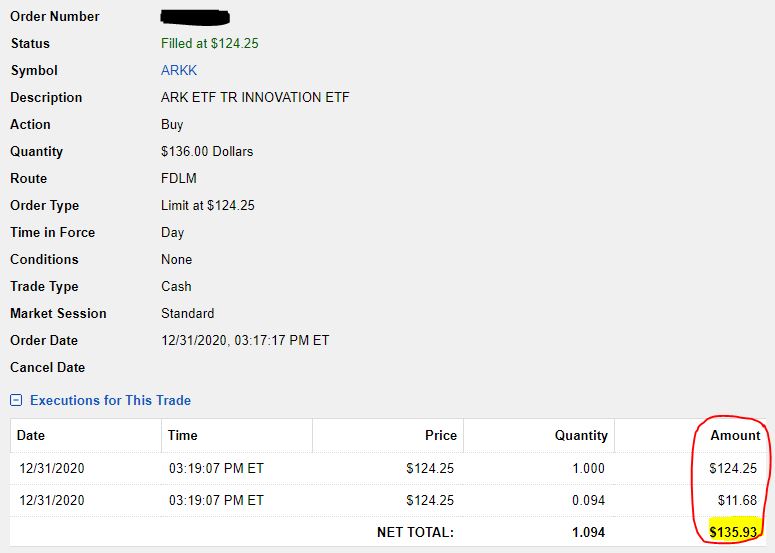 The trade executed in two buys a nanosecond apart, as sometimes happens with limit orders.

ARKK is the first exchange-traded fund in the portfolio; the other 16 GTCF positions are individual equities.

An ETF owns stocks that fit its manager’s objectives. Here is what ARK’s website has to say:

ARK Innovation, which I selected for the Grand-Twins College Fund, has the broadest scope. Its 48 holdings include companies that are sprinkled throughout ARK’s four other active ETFs.

As you can see, the fund’s team is a strong believer in Tesla (TSLA), the innovative electric vehicle (and other futuristic stuff) company run by the mercurial Elon Musk.

Indeed, much of Wood’s reputation was built on her early bullish call on Tesla — a call that brought some derision at the time but since has earned her plaudits for her stock-picking acumen.

Tesla and the other companies ARKK owns fall within the 5 “major innovative platforms” and 14 “evolving technologies” that make up the universe of stocks in which Wood and her team invest. 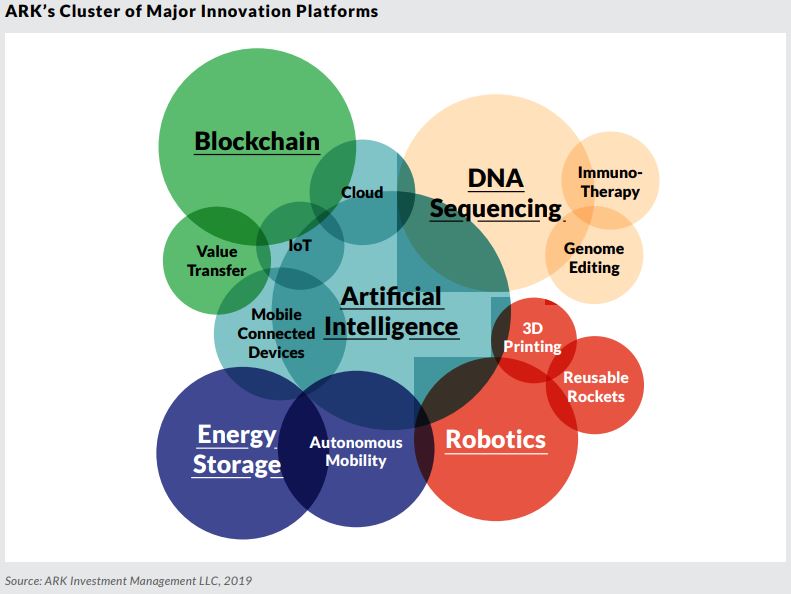 Having spent some time learning more about disruptive investments in general and the ARK funds in particular, I also have done a little buying for my personal portfolio. Specifically, I initiated positions in ARKK, ARK Genomic Revolution ETF (ARKG) and ARK Fintech Innovation ETF (ARKF).

Each of the company’s two other active ETFs — ARK Autonomous Technology & Robotics ETF (ARKQ) and ARK Next Generation Internet ETF (ARKW) — join ARKK in listing Tesla as its No. 1 holding.

Though I agree with Wood that TSLA is a captivating company — not to mention one that completely crushed the S&P 500 in 2020 — I don’t want to put too many of my investing dollars in one name. (I also own a few shares of TSLA outside my ARKK investment.) 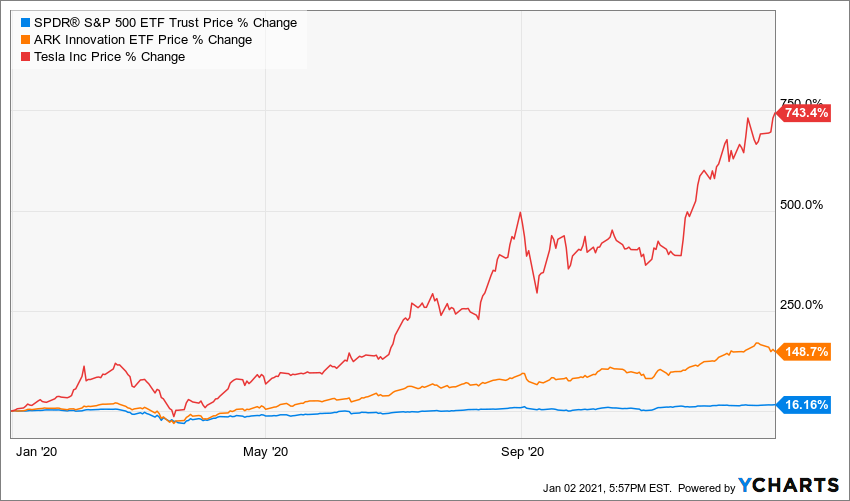 The ARK ETFs invest in speculative companies that can experience significant price movement from one trading session to another; and when there is a market-wide correction or crash, the prices of many (or most) of these stocks will plummet.

So they are not for those with low risk-tolerance levels or weak stomachs.

In addition, ARKK and the other ETFs carry a 0.75% expense ratio, meaning investors are paying Wood and her team a small fee to pick stocks for them.

Therefore, interested parties are strongly urged to do considerable research. ARK’s website is a good place to start (HERE); Cathie Wood’s Dec. 28 statement gives some unique insight (HERE); and there are some thought-provoking YouTube videos (such as HERE).

In that video, Wood talks about the five innovative platforms all emerging at once (those listed on the far right side of the following graphic) — a contrast to previous disruptive technologies that were separated by decades. 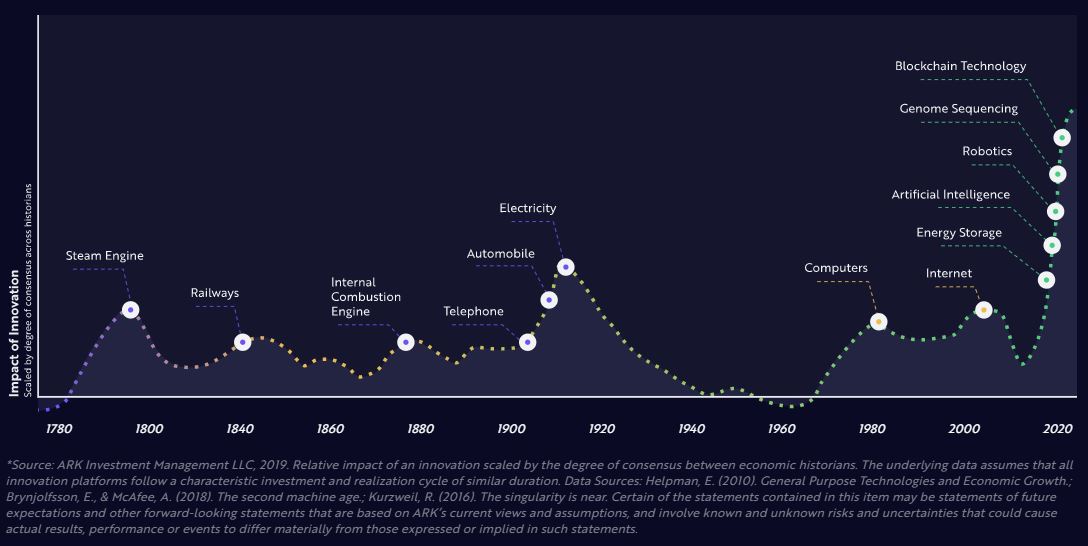 As intelligent as Cathie Wood obviously is, she’s still a salesperson trying to get investors to buy her ETFs. So I also encourage folks to look for resource materials that aren’t affiliated with her funds, such as THIS ARTICLE that recently appeared in Investor’s Business Daily.

A Google search will yield a bazillion avenues of research; the challenge is not getting sucked down too many rabbit holes!

Having launched the Grand-Twins College Fund in June, I am delighted with the results so far. 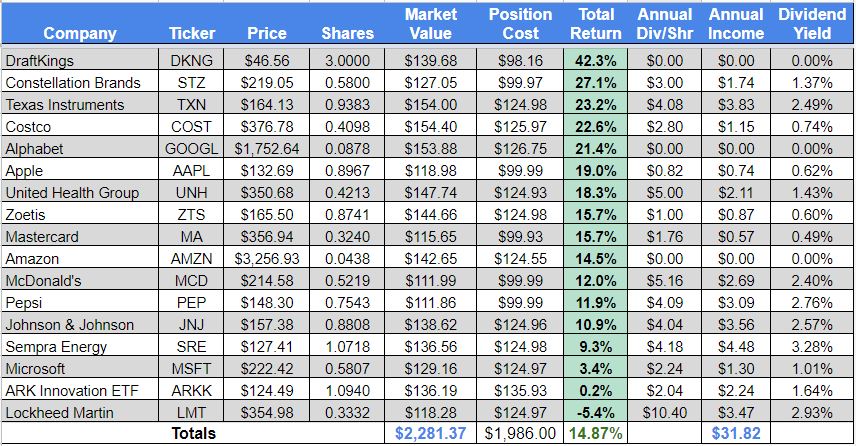 The above table is updated regularly on the GTCF home page, which also includes links to all related articles.

The portfolio experienced a total return of almost 15% through Dec. 31, and only Lockheed Martin (LMT) was in the negative column.

DraftKings has been the top performer even though it sustained double-digit losses in two of the last three months; it was down 11% in December. Volatility has been the norm for DKNG, which fairly often has 5% or greater price swings from one session to the next. 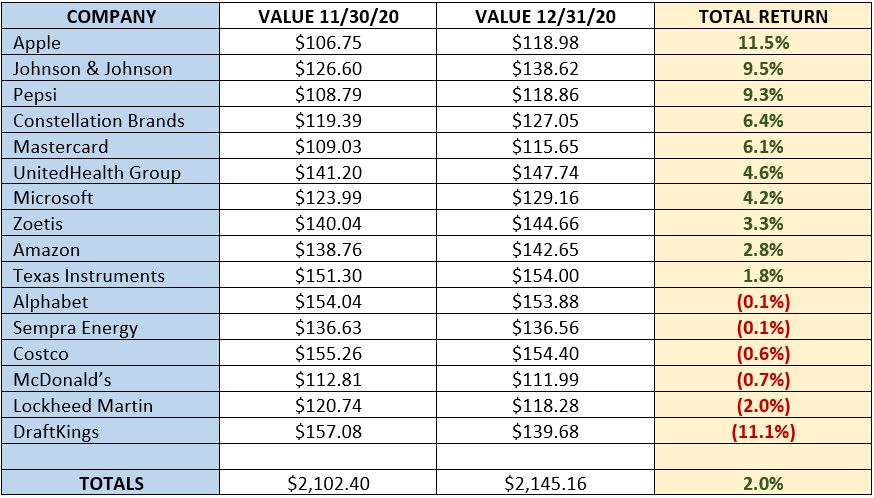 The Grand-Twins College Fund is a “growth-and-income” portfolio. Although growth has been emphasized — a fact reinforced by the addition of ARK Innovation ETF — I like that most of the holdings (including ARKK) pay dividends.

Seven GTCF holdings distributed money to shareholders in December, and that cash was reinvested right back into those companies. 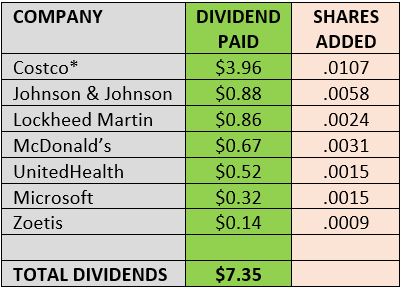 Boosted significantly by a $10/share special dividend paid by Costco, December was the portfolio’s best income-producing month to date.

It was the fourth time since 2012 that COST has paid a special dividend, but I never count on special divvies when I calculate yield or estimate future income.

Two GTCF companies declared dividend raises in December, Zoetis (ZTS) and Mastercard (MA), and both were by double-digit percentages.

Zoetis and Mastercard are low-yielding growth companies, so I look at the income they produce as nice little bonuses. I’m much more impressed with the nearly 16% total return each has provided since becoming portfolio components.

The world has changed a lot over the last 17+ years, and things no doubt will look very different when Logan and Jack are using this fund to help pay for college 17+ years from now.

So even as I buy companies with decades-long histories of success for the Grand-Twins College Fund, I also seek tomorrow’s industry leaders. Investing, after all, is a forward-looking endeavor.

Many of the “disruptive” companies in the ARK Innovation ETF already have had a profound impact on the world, and yet, relatively speaking, they are in the infant stages of their development.

It will be fascinating to follow them as they mature — and to see if they, in turn, get disrupted by companies that don’t even exist yet.

Note: I also manage the real-money Income Builder Portfolio. My next article, Part 1 of the  annual review, is scheduled to be published Thursday, Jan. 7. Until then, check out current holdings and past articles on the IBP home page HERE.