In 1980, Ronald Reagan was elected president of the United States … and investors rejoiced, sending the S&P 500 to its best November ever, a 10.2% gain. 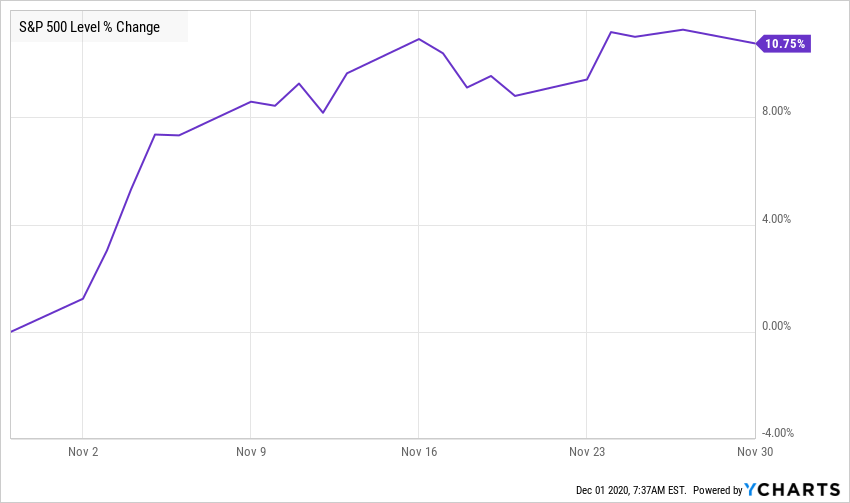 Most of us would consider that a pretty good gain for an entire year.

Investors seem to be betting that Biden will return calm and decency to the White House after four years of chaos and divisiveness under Donald Trump.

Additionally, there has been good news on the COVID-19 vaccine front: Several pharmaceutical companies could start distributing millions of doses late this year or early 2021.

That’s an essential step toward righting the economy, restoring the American way of life for millions, and making folks smile as if they’re carefree kids. 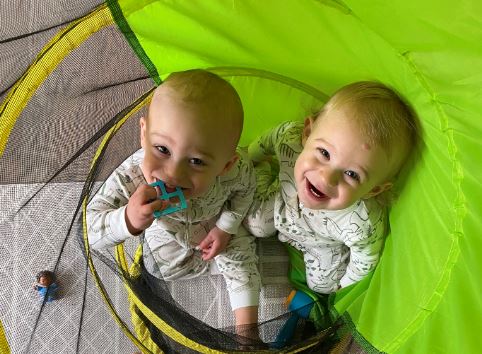 Those fine lads are my 16-month-old grandsons, Jack and Logan. Though a tad too young to follow the market, they no doubt would be giddy with giggles if they knew that the portfolio I’m building for them — the Grand-Twins College Fund — outperformed the S&P 500 in the index’s all-time best November.

The dozen GTCF positions in which there were no new investments during the month combined for an 11.4% total return.

The biggest November gainers had been losers the previous month. DraftKings (DKNG) was down 40% in October, Mastercard (MA) was off 15%, and Constellation Brands (STZ) fell 13%.

DKNG is the very definition of a speculative play, and daily price swings of 5% or more are quite common. The gambling company also has been the GTCF’s biggest winner since I launched the portfolio in June. 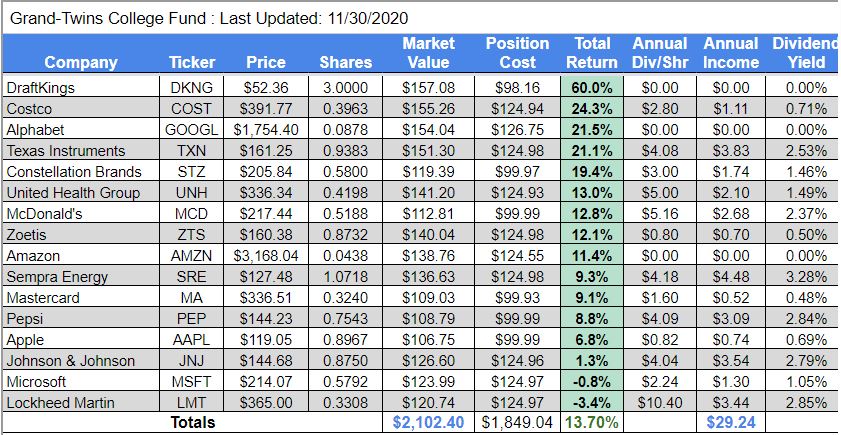 The above table is updated regularly and appears on the GTCF home page, along with links to every article related to the portfolio. See it HERE.

I also bought about $25 more of Apple (AAPL), a position I initiated in October.

Two of those four companies, Apple and Zoetis, appear to be quite overvalued.

AAPL, which has gained more than 200% since the start of 2019, has a forward price/earnings ratio of about 30, its highest in decades.

Nevertheless, analysts are bullish, with 28 of the 40 surveyed by Reuters giving Apple either a Strong Buy or Buy rating. Morgan Stanley raised Apple’s “bull case” price target to $191 — about 60% more than I just paid.

As the following “Financial Sonar” from Jefferson Research shows, there is no doubt about the strength of Apple’s fundamentals. 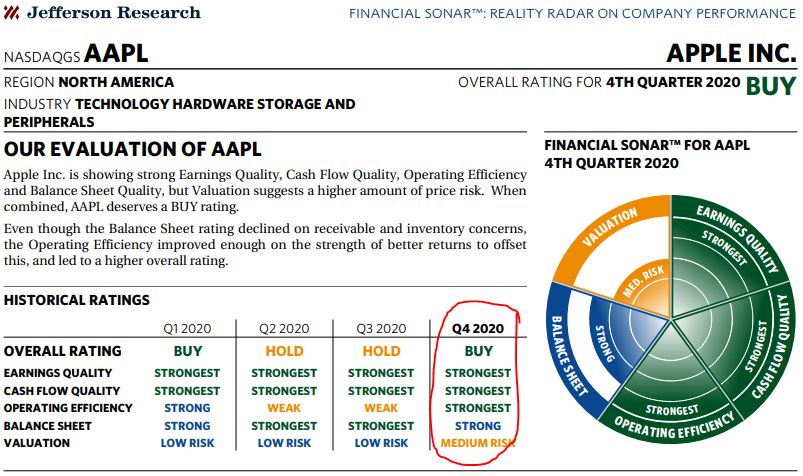 Zoetis actually has an even higher forward P/E ratio, about 37. Then again, the superbly-run industry leader always carries a premium price tag.

For example, its had a 39 forward P/E when I first bought it for the GTCF on June 29, but it nonetheless is up a market-beating 21% since.

UnitedHealth and Johnson & Johnson are more fairly valued, with forward P/E ratios of about 18 and 16, respectively. I recently selected UNH for the other real-money project I manage, the Income Builder Portfolio. (JNJ and AAPL also are in the IBP; see the full portfolio HERE.)

For what it’s worth, these four recent buys are among the six GTCF components that get A ratings from Schwab. 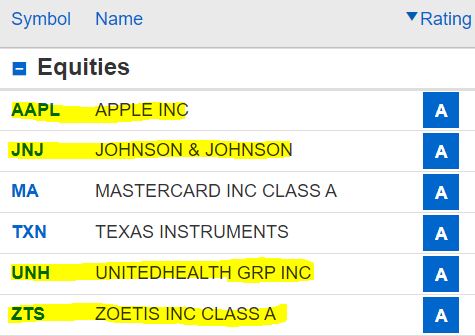 Of the approximately 3,000 companies in Schwab’s analytical universe, only the top 10% get A (or Strongly Outperform) ratings. To quote the site: “If you are looking to add a stock to your portfolio, ‘A’ rated stocks may be the best candidates for consideration.”

Three of the GTCF’s holdings pay no dividend at all, and several others have very low yields. Still, I consider this a “growth-and-income” portfolio because, years from now, the income that several components produce will have contributed nicely to the overall return.

In November, five GTCF holdings paid dividends, all of which were reinvested to buy fractions of shares in the companies. 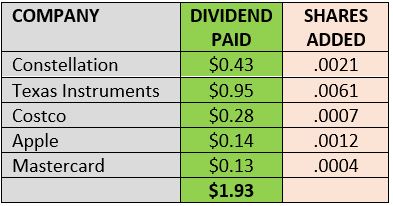 There were no regular dividend raises announced during the month, but Costco (COST) put shareholders in the holiday spirit by coming through with a $10/share special dividend that will be paid Dec. 11.

Costco yields less than 1%, yet that doesn’t include special dividends the company has been paying every 2-3 years over the last decade.

This special dividend will generate $3.96 for the GTCF on Dec. 11, and that will be reinvested to bring an additional small piece of COST into the portfolio.

All of my grandsons, including 5-week-old Owen, have parents who shop at Costco for diapers, food, clothing and so much more.

And only DraftKings has a better total return than Costco’s 24% since the GTCF debuted. So what’s not to love, right Owen? 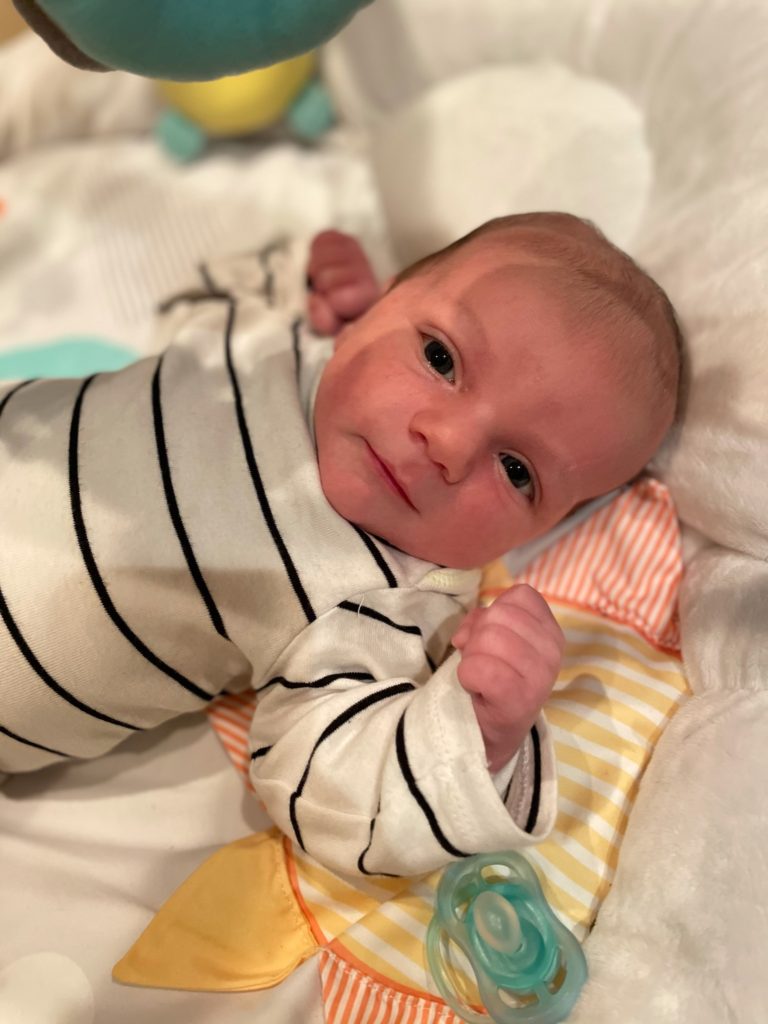 Two GTCF companies, Zoetis and Mastercard, are expected to increase their dividends in December.

Both have aggressively grown their payouts over the last several years, so I wouldn’t be the least bit surprised if we see double-digit raises again.

Yes, it was a November to remember for Mr. Market. Even Trump’s baseless claims about a “rigged” election and lies about “massive fraud” didn’t knock the bulls off course.

Investing is all about the future, however, and bears still could have their way.

For one thing, the pandemic rages on. COVID-19 killed Americans at an average of one per minute in the two weeks leading to Thanksgiving, and epidemiologists worry that things could get worse in the months ahead before a vaccine might — might — make things better.

Valuations also are stretched for so many stocks, including the market’s biggest names; what goes up fast can come down very hard.

Nevertheless, for those building a portfolio gradually, in small increments, over many years — as is the case with the Grand-Twins College Fund — it’s hard to say that there’s really such a thing as a bad time to buy.

By the time these guys are ready for college, they’ll be mighty happy I think that way. 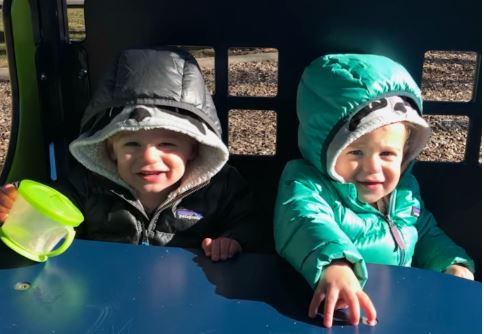