With the market continuing its giddy, post-election, fingers-crossed-for-coronavirus-vaccine climb, finding a fairly valued, high-quality stock is a challenge.

Detecting such a company in the Consumer Staples sector — especially if it isn’t in an industry facing extreme headwinds — is tougher still.

For example, I put the following filters into the Simply Safe Dividends screener:

When I hit the button, here’s what the search revealed:

Of course, I could have played around a little with the categories and found a few “investable” stocks. Even if I had gone down a level in every category, however, only 11 companies in the staples sector would have matched — and several of those look overvalued.

So for my next selection for DTA’s Income Builder Portfolio, I decided to go outside the box with a mid-cap stock that has been available to investors for less than a year.

But I’m really not going that far outside the box; this company’s brands are familiar to just about every American adult.

At some point during today’s trading session, I will execute a purchase order on Daily Trade Alert’s behalf for about $1,000 worth of Reynolds Consumer Products (REYN).

Reynolds Wrap was first introduced in 1947. My grandmother used it to cover pies she baked, my mother wrapped leftovers in it, the product is in my cupboard now, and my grown kids have it in their kitchens, too.

The company had been formed a few decades earlier as the U.S. Foil Company by Richard S. Reynolds, nephew of tobacco tycoon R.J. Reynolds.

The business grew and became Reynolds Metals Company. Over the years, it expanded its product line significantly before being acquired in 2000 by Alcoa (AA).

Alcoa sold its packaging and consumer businesses in 2008 to New Zealand-based Rank Group, which is owned by that country’s richest man, Graeme Hart. Rank then acquired Pactiv Corp., maker of Hefty trash bags, combining those operations under the Reynolds umbrella.

Finally, in January of this year, Reynolds became a publicly traded corporation. Hart retained 77% of Reynolds’ voting rights through a subsidiary he owns.

Most of the company’s top brands rank No. 1 in their product categories, often by huge margins. 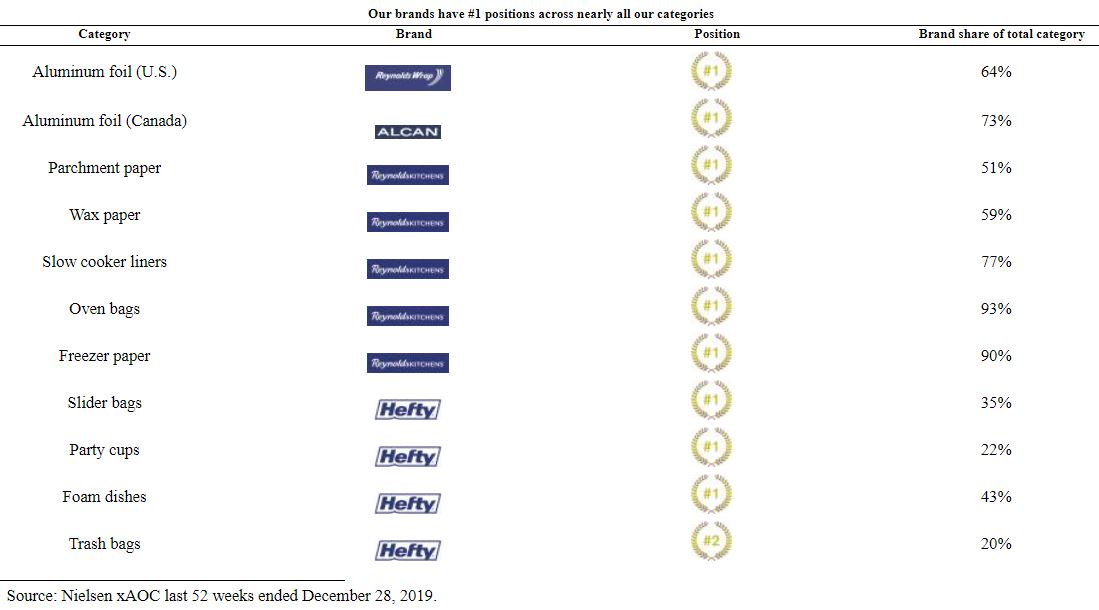 Reynolds presented its third-quarter report on Nov. 11, showing quite well.

Revenue of $823 million was an 11% improvement over Q3 2019 and beat analyst estimates by $26M, and REYN also easily beat earnings estimates. 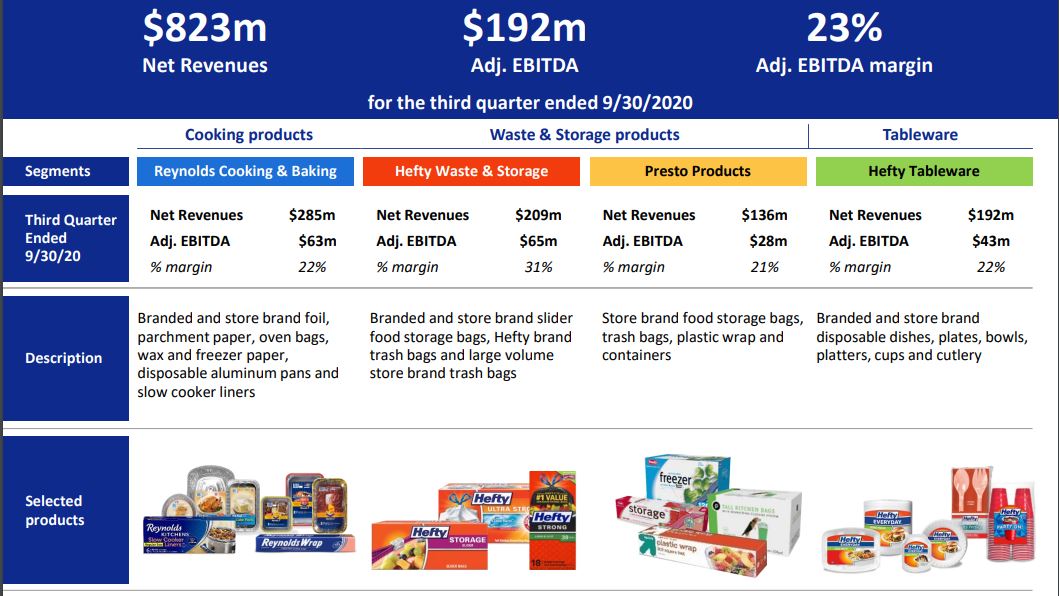 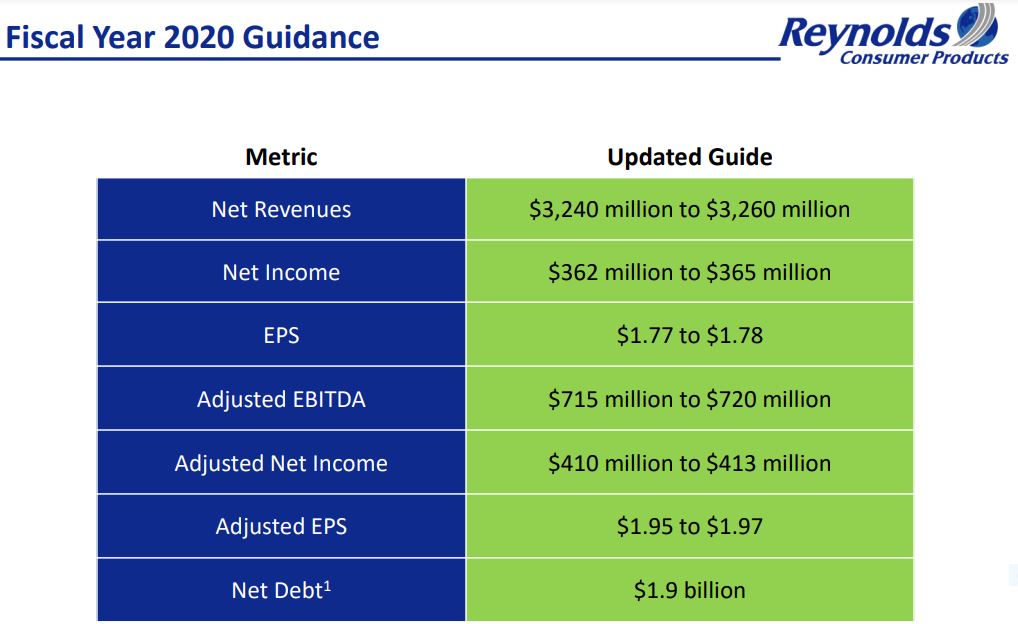 Analysts at Credit Suisse, who early in the year called REYN their “top defensive pick,” were impressed with the report — especially given that the global coronavirus pandemic has been getting worse.

Reynolds announced its first quarterly dividend shortly after its initial public offering, 15 cents per share. The company then raised the amount to 22 cents for its August payment, and kept that same amount for November.

Extrapolating the dividend to 88 cents per year, REYN has a yield just under 3%.

During the Nov. 11 earnings call, CFO Michael Graham said: “We remain committed to cash returns, including a dividend payout ratio of approximately 50% of net income, with dividends growing over time … “

So while there is no dividend “promise,” there is a commitment, and I like that.

Given its newness as a publicly traded company, Reynolds does not carry many of the quality ratings common to the Income Builder Portfolio’s other 36 components.

For example, REYN gets a sub-investment-grade BB credit rating from Standard & Poor’s, and mediocre Safety (3) and Financial Strength (B+) scores from Value Line.

Morningstar doesn’t cover the company yet, so REYN has no moat or stewardship ratings from that analytical firm. And Simply Safe Dividends still hasn’t assigned it a safety score.

Nevertheless, we are not talking about a highly speculative, fledgling operation here. Reynolds has been around for generations and makes top-selling, iconic kitchen products.

It really doesn’t take a wild imagination to believe Reynolds Consumer Products will be a good long-term investment for the IBP.

My next article, to be published on Wednesday, Nov. 18, will dive into REYN’s valuation and other pertinent information.

We Just Bought These Stocks for the Income Builder Portfolio [Buy Alert!]
While there are many things to like about these fine companies, their dividend growth ranks high on the list.

These Stocks Are Breaking Out in a Big Way

Every Investor Should Own at Least a Little Bitcoin Today