I was going to save my big news for later … but as a guy who spent more than three decades as a newspaper journalist, I figured I shouldn’t “bury the lead.”

So, everybody, welcome the newest member of the family, my grandson Owen Baxter Randall. 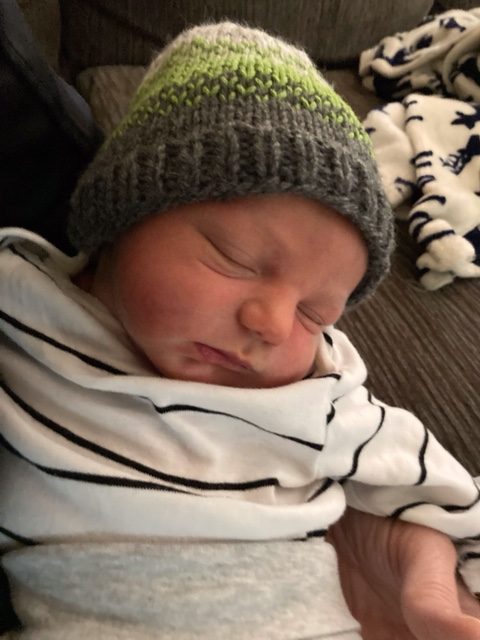 My daughter Katie gave birth to Owen on Oct. 24, while my wife Roberta and I were en route to visit them in Seattle.

We spent a week with Owen, Katie and her husband Ben, and we sure were sad when we had to go home to North Carolina. But hey, my Sugar Mama had to get back work; I mean, somebody has to pay for all my golf and beer!

Naturally, the entire family was thrilled to hear about our adorable new addition. Among those smiling: Owen’s unbelievably cute cousins, Logan and Jack. 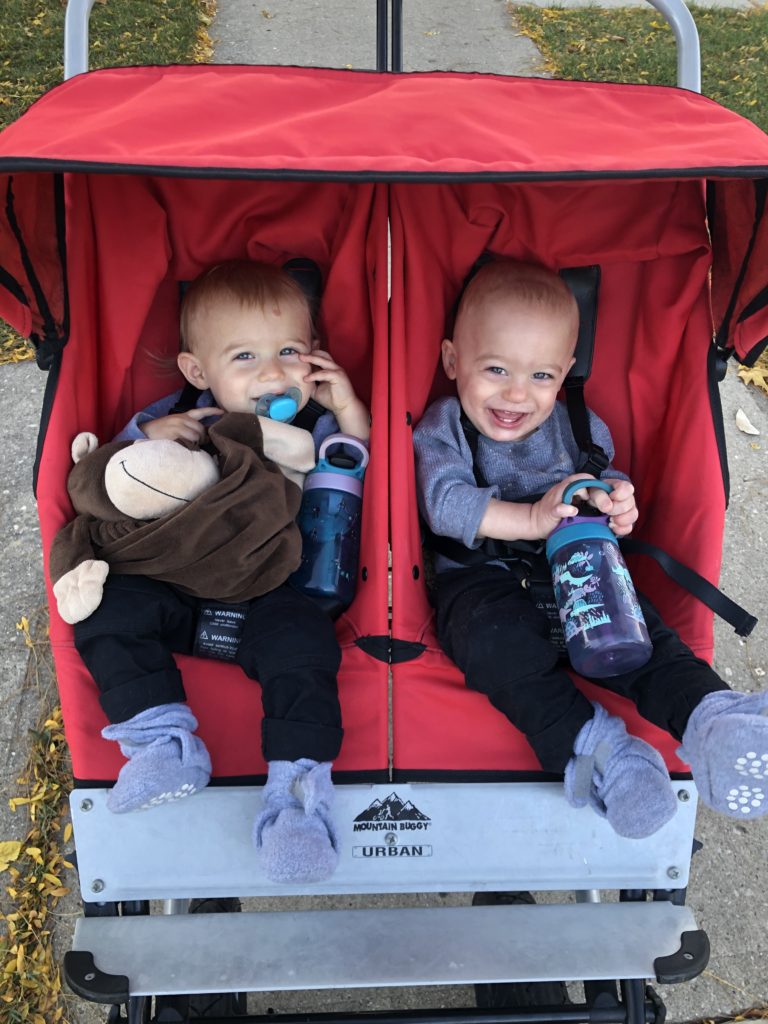 And speaking of “LoJack,” I recently made the October purchases for my Grand-Twins College Fund.

With most of the $100 monthly allotment, I initiated a position in Apple (AAPL); the rest was an add-on to the existing stake in Microsoft (MSFT).

The addition of Apple gives the GTCF pieces of 16 companies.

The above table is updated often on our home page, which also includes links to every article about the portfolio. See it HERE.

As was the case with the overall market, which had its worst month since March’s “pandemic plunge,” October was rough for the GTCF. After having a total return of more than 11% from its June inception through Sept. 30, the portfolio’s TR is less than 4% now.

DraftKings (DKNG), which was soaring to the sun a month ago, fell to earth with a thud in October. Investors, fearing that another coronavirus wave could sideline sports leagues and slam the economy, said, “Sell, sell, sell!” 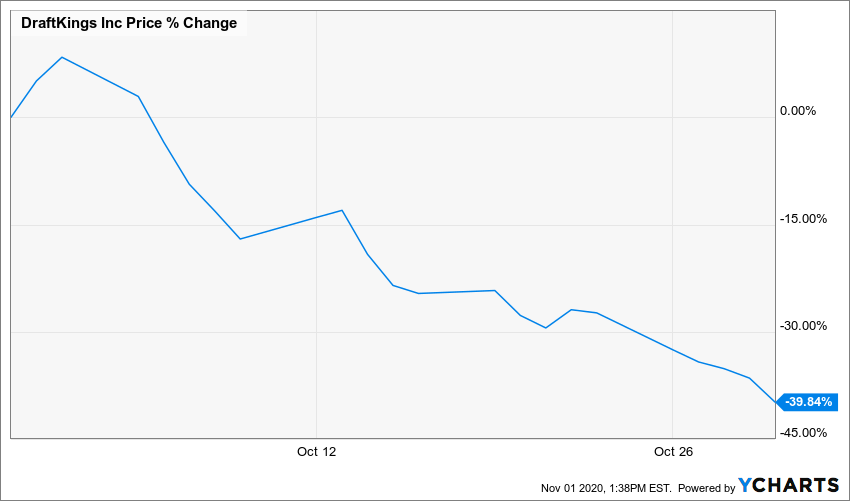 Still, the DKNG position is in positive territory since I added it to the portfolio in June.

Alphabet (GOOGL), Sempra Energy (SRE) and Texas Instruments (TXN) increased their total return from Sept. 30 through Oct. 31, and all three significantly outperformed the S&P 500 during October. 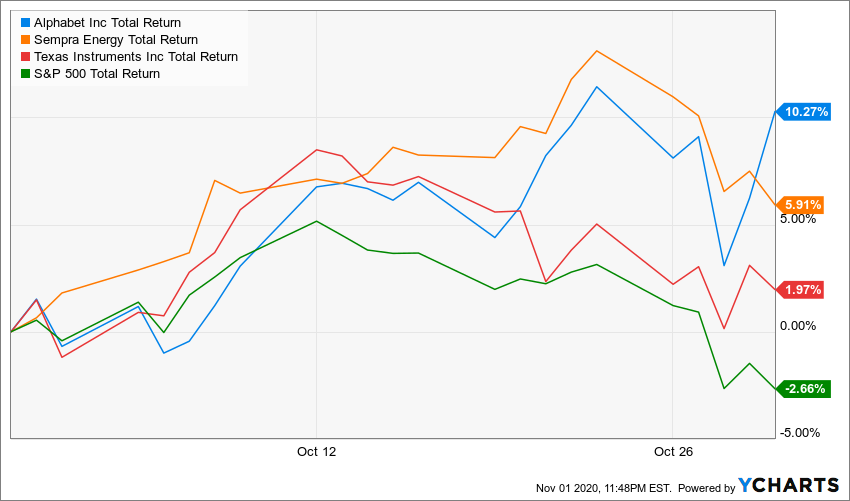 My colleague, Dave Van Knapp, introduced his new series, the High Quality Dividend Growth Stock of the Month, on Oct. 9 by selecting the maker of iPhones, iPads, Macs and Apple Watches.

Dave did an incredible job explaining why AAPL — with its place as an iconic company secured, and with its bulletproof balance sheet — is a company worthy of further research by interested investors.

Anybody considering Apple should read his article, so I won’t repeat all the great points he made.

Instead, I will briefly touch on what’s happened since then — most notably, the company’s Oct. 29 earnings call.

Apple capped its record-setting fiscal 2020 year by beating analysts’ estimates for both revenue and earnings in the fourth quarter. As Chief Financial Officer Luca Maestri said:

Our outstanding September quarter performance concludes a remarkable fiscal year, where we established new all-time records for revenue, earnings per share, and free cash flow, in spite of an extremely volatile and challenging macro environment. Our sales results and the unmatched loyalty of our customers drove our active installed base of devices to an all-time high in all of our major product categories. We also returned nearly $22 billion to shareholders during the quarter, as we maintain our target of reaching a net cash neutral position over time.

Investors apparently were reacting to the Q4 underperformance of the iPhone, which is Apple’s biggest money-maker by far. As the following chart shows, iPhone quarterly sales fell by 21% compared to Q4 of 2019, and its full-year sales fell by 3%. 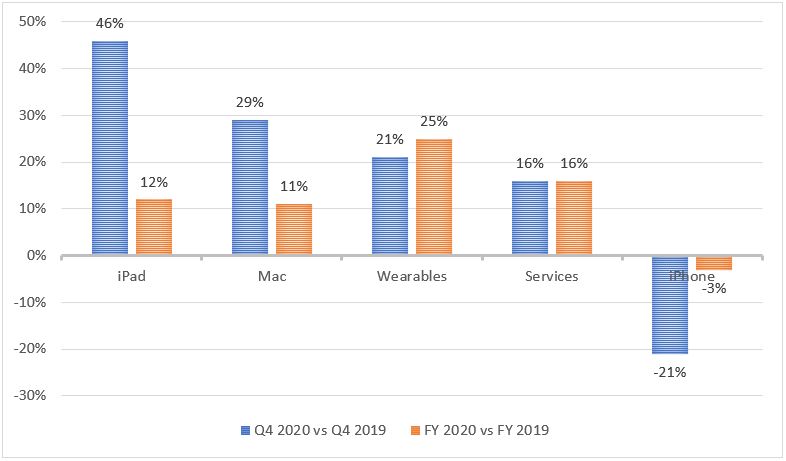 The main reason for the underperformance: The iPhone 12 was released later than Apple usually introduces new models, and it wasn’t available during Q4.

Investors also weren’t thrilled that CEO Tim Cook declined to provide guidance for 2021, in part because of the uncertainty caused by the COVID-19 pandemic.

Despite all of that, I remain high on Apple’s long-term prospects — as do most analysts.

Additionally, AAPL is a perfect stock for a long-range college fund because Jack and Logan no doubt will be surrounded by Apple products as they grow up; therefore, the boys might be interested in learning more about the investing process from good ol’ Grandpa.

As for Microsoft, I wanted to add to one of the GTCF’s smaller positions, and I really liked the company’s earnings presentation. Morningstar gives MSFT a fair value of $235 — 17.5% higher than I just paid for a slice of the stock.

I call the Grand-Twins College Fund a “growth and income” portfolio. And although the emphasis is on growth, the second part of that equation does matter to me.

The GTCF received one dividend raise in October, a modest 3% bump from McDonald’s (MCD), which will add a whopping 9 cents to our annual income stream.

Only one of the portfolio’s companies, Sempra Energy, pays its dividend on a January-April-July-October schedule. Sempra, the GTCF’s highest yielder, brought in $1.11, which was reinvested to buy about .009 of an SRE share.

Although October included the purchase of only one new stock, only one addition to an existing position, only one dividend hike and only one reinvested dividend, the combination nicely illustrates the various elements that contribute to a portfolio’s rising income stream. 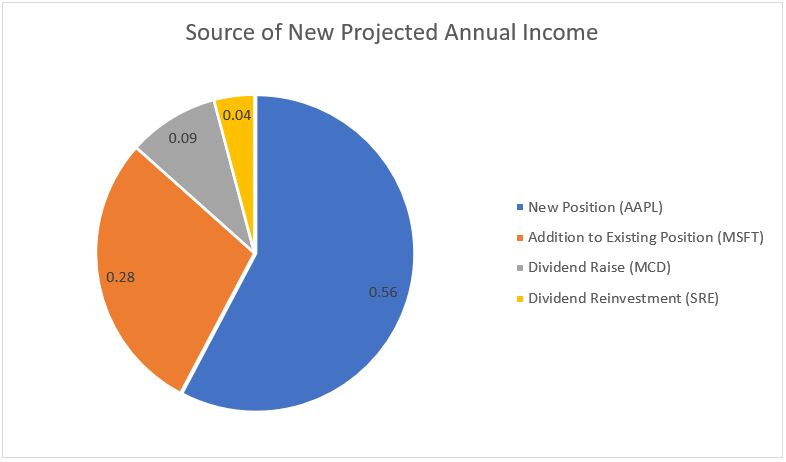 All of the amounts I just mentioned — 56 cents, 28 cents, 9 cents, 4 cents, 97 cents, even $23.50 — are so small that it might seem silly to bring them up. But after a decade or more of every dividend-paying position in the Grand-Twins College Fund growing and compounding, it will be stupendous, and not silly at all.

Apple has been the top performer by a landslide in the real-money Income Builder Portfolio I manage for Daily Trade Alert.

It also is up nearly 400% in the real-money, passive Dividend Growth 50 portfolio I funded in 2014. And I am thrilled to say I own AAPL in my personal portfolio, as well.

So it’s great to welcome Apple to the Grand-Twins College Fund … even if it’s only my second-favorite recent newcomer! 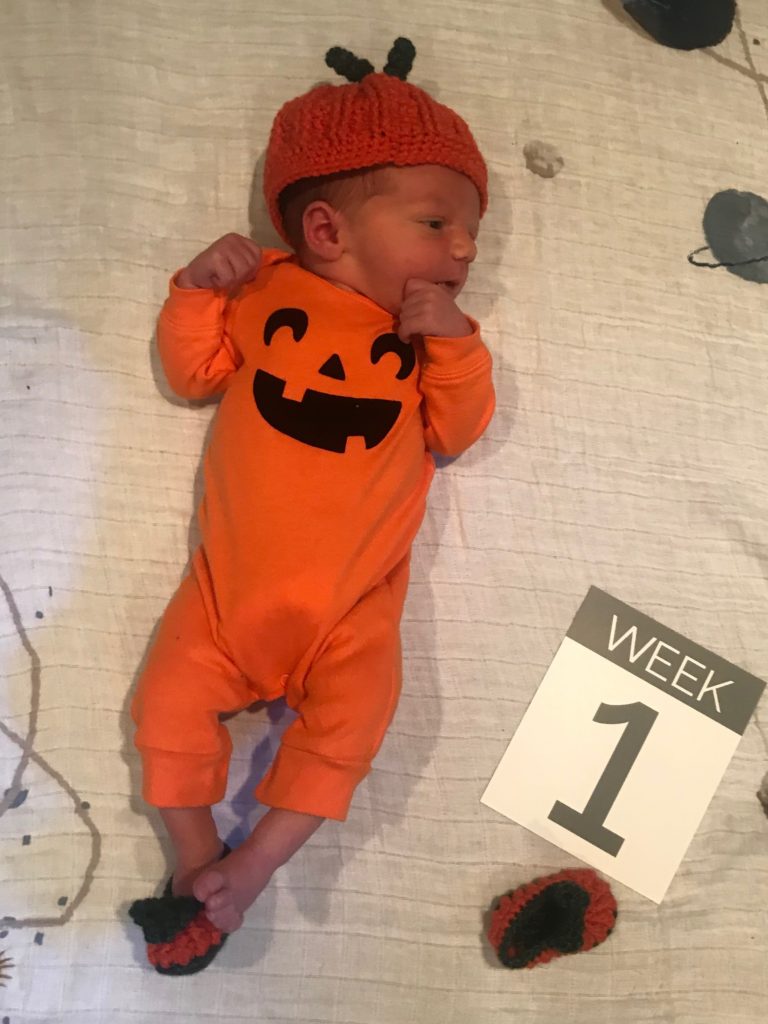 At some point before Owen’s first birthday, my wife and I will establish a college fund for him. That, however, will be held and managed separately from this account for Jack and Logan.

I’ll let y’all know when we open Owen’s account. Until then, follow this space every month for my GTCF updates.