In 1995, after 83 years of growth and diversification individually, those companies merged to become Lockheed Martin (LMT), this month’s Dividend Growth Stock of the Month. The company today is the world’s largest defense contractor and supplier of fighter aircraft. 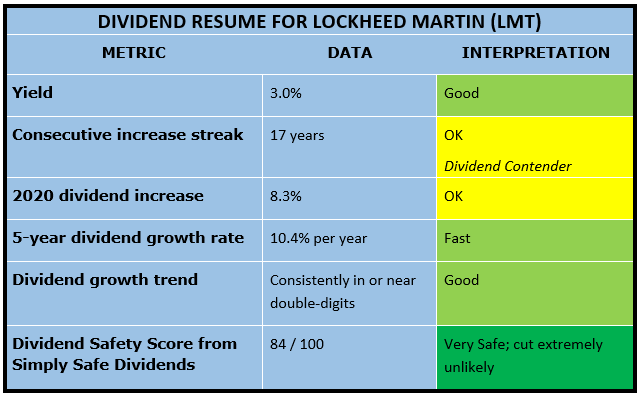 LMT’s 3.0% yield puts it at 1.7x the S&P 500’s yield. The long- and short-term history of dividend increases is that they have been raising the dividend fast, in or near double-digits. This year’s increase (recently declared) clocked in at 8.3%. (The ex-dividend date for the first payment at the new higher rate will be November 30.)

The dividend is not in danger, as indicated by Simply Safe Dividends awarding a safety score of 84 out of 100 points, which categorizes as “ very safe.”

Overall, I would classify Lockheed Martin as a mid-yield, fast-growth dividend growth stock.

LMT operates in four business segments organized around the products and services produced by each. (The sales and profit figures shown were recently reported at LMT’s third-quarter earnings presentation.)

LMT has some products with wide fame, such as the F-35 stealth fighter that took nearly 20 years to develop and reached initial operational capability in 2015. The F-35 program provides about 27% of LMT’s total net sales.

Geographically, 61% of LMT’s sales come from the USA. The remaining portion of Lockheed Martin’s business is comprised of international government and commercial sales of products, services and platforms.

LMT’s third-quarter report was strong. The company reported record quarterly sales, the generation of significant cash, and a strong backlog of orders. Based on results to date, LMT raised its full-2020 outlook. 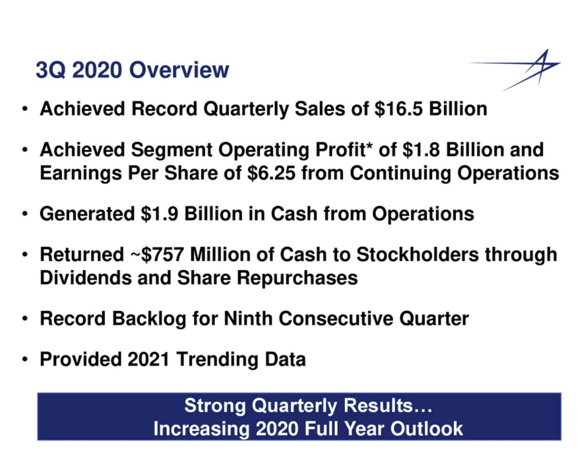 Morningstar awards LMT a Wide moat, its highest rating. Major factors in that assessment include:

New entrants into the “club” of prime defense contractors are rare. Lockheed Martin, Boeing’s BAE Systems, Raytheon, Northrop Grumman, Airbus, and General Dynamics (which was the Dividend Growth Stock of the Month for June, 2020) have been the top seven global arms producers for many years.

LMT gets an “A++” financial grade from Value Line, their highest grade. Let’s look at specific financial categories and see if we agree.

The average ROE for all Dividend Champions, Challengers, and Contenders is about 15%, which is similar to the ROE for S&P 500 companies generally.  The following chart shows LMT’s ROE for 2011-2019.

As you can see, LMT’s numbers are (almost literally) off the charts. Their average ROE is well into triple digits.

Debt-to-Capital (D/C) ratio measures how much a company depends on borrowed money. Companies finance their operations through a mixture of debt, equity (new shares), and their own cash flows.

A typical D/C ratio for a large, healthy company is 50%, meaning equal dependence on debt and equity. Debt is an indicator of financial risk. All else equal, stocks with high D/C ratios are riskier than those with low D/C ratios.

In some companies, LMT’s level of debt would be alarming. But LMT is so strong overall that its debt has not presented any problems.

LMT’s earnings have all been positive in the last decade, with a general rising pattern that has accelerated in the past couple of years. There is nothing on the horizon suggesting that earnngs will fall to low levels any time soon.

Free Cash Flow (FCF) is the money left over after a company pays its operating expenses and capital expenditures. Whereas EPS is subject to GAAP accounting rules, which shift money around (as does depreciation, for example), cash flow is a more direct measure of money flowing through the company on a real-time basis. FCF is the cash that a company has available for dividends, stock buybacks, and debt repayment.

LMT’s overall cash flow has been inconsistent but always positive over the past decade. This kind of FCF strength contributes to Simply Safe Dividends’ high dividend safety score that we saw earlier.

I like declining share counts, because the annual dividend pool is spread across fewer shares each year. By retiring its own shares, the company is investing in itself, expanding each remaining share into a larger piece of the pie, and improving all of the per-share statistics.

LMT has been reducing its outstanding shares steadily over the past decade. It has about 23% fewer shares now than it had 10 years ago. The company maintains a “rolling” program of repurchase authorizations, which the board tops off from time to time. In September, the board added $1.3 billion to the fund, which now totals $3.0 billion for more share repurchases. 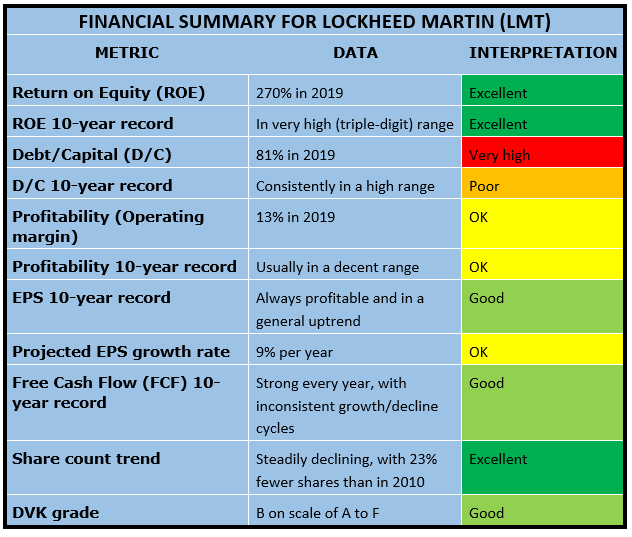 Overall, this is a good financial record, although the heavy reliance on debt seems curious and unnecessary.

As good a company as Lockheed Martin is, I would not give it the A++ grade that Value Line does for its financials. Something like A (on their 9-level scale) would seem to be more appropriate. On my own standard A-F scale, I give it a B.

My 4-model process for valuing companies is described in Dividend Growth Investing Lesson 11: Valuation. Let’s go through the steps.

These two models compare the stock’s current price to (1) FASTGraphs’ basic estimate of its fair value, and (2) the stock’s own 5-year average valuation. 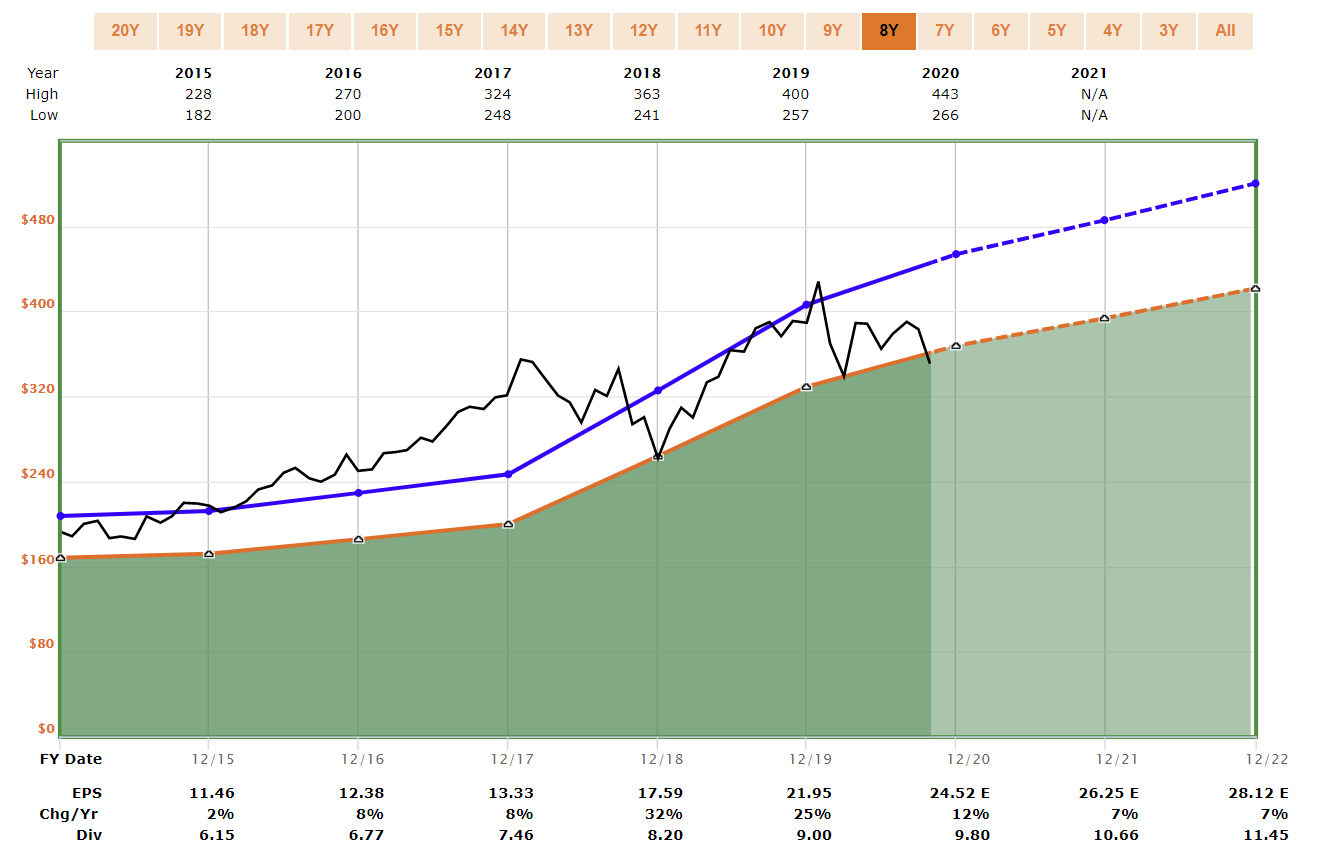 To put numbers on those observations, I compute valuation ratios, which are the ratios of the actual price to the fair price references. Here is the formula:

We get the numbers from the information panel to the right of the graph (not shown above). Here are the valuation ratios for LMT.

Model 3: Morningstar Star Rating. Morningstar ignores P/E ratios. Instead, they use a discounted cash flow (DCF) method for valuation. Many investors consider DCF to be the best method of assessing stock valuations.

Morningstar creates a detailed projection of all the company’s future cash flows. Each year’s number is discounted back to the present to reflect the time value of money, then they are added up. The resulting net present value of all future cash flows is considered to be the fair price for the stock today. They update their estimates periodically.

Morningstar calculates LMT’s valuation ratio as 0.81, which leads to their fair price estimate of $433. Both numbers are circled on the display.

Model 4: Current Yield vs. Historical Yield. Last, we compare the stock’s current yield to its historical yield. This approach is based on the idea that if a stock’s yield is higher than normal, it suggests that its price is undervalued (and vice-versa). 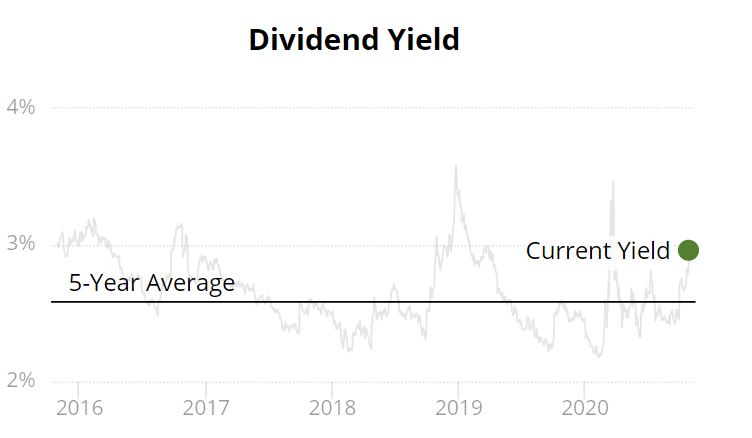 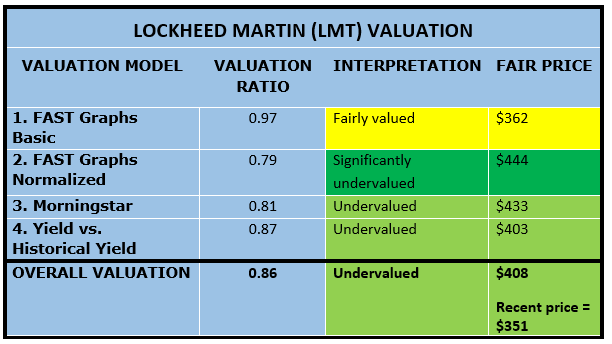 Given that discount, this looks like a good time to buy Lockheed Martin if you like its business and prospects. The four models I use average out to a 14% discount on fair price.

I have a dividend reinvestment coming up in November in my Dividend Growth Portfolio, and LMT will definitely be in the running for possible purchase. The fact that the ex-dividend date for its newly-increased dividend comes in late November is an added attraction – it would mean an “extra” dividend payment in 2020.

Beta measures a stock’s price volatility relative to the S&P 500. I like to own stocks with low volatility, because they are easier to live with.

LMT’s 5-year beta of 0.94 compared to the market as a whole (defined as 1.0) means that its price has moved about the same as the market on average. This is a neutral factor.

The average recommendation of “buy” is a positive factor.

I do not see any significant negatives for LMT other than its high debt levels, which it seems to handle just fine and certainly do not hold the company back.

That said, this is not a recommendation to buy, hold, sell, trim, or add to LMT. Any investment requires your own due diligence. Always be sure to match your stock picks to your personal financial goals.

Other Reading on LMT

Lockheed Martin is a holding in DTA’s Income Builder Portfolio, which is managed by Mike Nadel. Mike has made two purchases of LMT for the portfolio in 2020. Read his article from July, 2020, explaining his most recent purchase of LMT, here.

Jason Fieber has selected Lockheed Martin as his Undervalued Dividend Growth Stock of the Week twice in 2020. You can read Jason’s most recent article about LMT, from earlier in October, here. 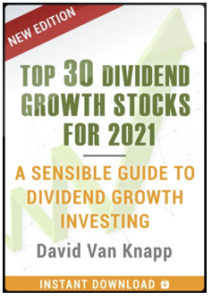 This will be my 8th e-book on dividend growth investing. The last one was in 2014.

Please click here to learn more about the new e-book. I invite you to join my email list for free monthly updates about the book’s progress, behind-the-scenes information about the writing process, and links to my most recent articles about dividend growth investing.

If you sign up, as a thank-you I will send you a free pamphlet that explains compounding. You incur no obligation if you sign up for the monthly updates, and the pamphlet is yours to keep.