This is the first article in a new series about the highest quality dividend growth stocks. The High Quality Dividend Growth Stock of the Month articles will replace the former Valuation Zone series.

Stocks for this HQ series will be selected based primarily on their quality, as determined by my Quality Snapshot approach. Each article will include an overview of the company, reviews of its quality and dividend records, and a look at the company’s valuation. Only very high-quality companies will be presented.

One of the reasons to create this new HQ series is to be able to include great companies that may not be well-valued.

In the former Valuation Zone articles, I usually wrote about stocks that were undervalued.

But the fact is that some great DG stocks haven’t been well-valued for years, as a result of the long bull market that began in early 2009 and has continued almost without interruption for more than a decade.

The new series will give me opportunities to tell you about these great companies.

I will still analyze each stock’s valuation. If the stock is not well-valued currently, I will suggest a reasonable entry price for those who wish to wait for the price to come back to fair value (or for fair value to rise to meet the price).

Some investors, especially younger ones with long investing careers ahead of them, often don’t wish to wait. They are not very concerned about current valuations. They figure that in 10-15 years, they won’t care what they paid for the best companies; they will just be glad that they own them. The new series is aimed squarely at them.

My hope is that this new HQ series will serve a broader audience by spotlighting a wider range of truly excellent dividend growth companies. The former Valuation Zone articles will be archived here.

I just ordered a new Apple Watch last night. Between my wife and myself, we own and use two iPhones, two iPads, and (soon) two Apple Watches. My wife is considering upgrading her iPhone 6; she’s looking forward to Apple’s next product launch event coming up on October 13.

We are not alone in using various Apple products and being members of Apple’s famed ecosystem. At the end of 2019, Apple’s installed base of products reached 1.5 billion.

After weathering some pretty lean years after its founding in 1976, Apple (AAPL) has wormed its way deeply into many American lives, as well as lives around the world. In August, Apple became the first publicly traded corporation to exceed $2 trillion in market capitalization (source). It hovers just below that level today.

Apple’s success has historically come from its innovative products, with more recent boosts from its services and subscription businesses.

Apple reports in these segments:

Apple derives about 45% of its revenue from the Americas. The rest comes mainly from Europe, China, and Japan.

As explained in Dividend Growth Investing Lesson 20: Quality Snapshots, I derive an overview of a company’s quality from the following sources, which I have come to trust and respect over the years:

On my quality grading system, which awards 0-5 points in each category, Apple falls just one point short of a perfect score, garnering 24 points of a possible 25. That score puts Apple into the highest tier of companies.

Apple’s “Narrow” moat rating from Morningstar looks out of place. Their discussion reads like a list of reasons that Apple should be accorded a Wide moat:

In any event, Apple comes across as one of the highest-quality companies in the world.

Apple yields just 0.7%. A lot of investors would say, “Huh? That’s not a dividend growth stock.”

One of the reasons I chose Apple for this inaugural article is so I could address that question of whether low yield disqualifies a stock from being considered a “dividend growth” stock.

I have only two criteria for regarding a stock as a DG stock.

Apple meets both of those criteria, so it’s a DG stock as far as I’m concerned.

That doesn’t mean that you would buy it primarily for its dividend income. You may buy it because you expect great long-term capital gains, and the dividend is a minor side issue.

That said, I did buy Apple for its income characteristics. Apple didn’t always have a sub-1% yield. The reason its yield is so low today is that its price has shot to the moon.

On the following chart, the maroon dots show when my wife and I bought shares in Apple. The first purchase was at about 2.6% yield, and the others range down to 1.6%. My thesis for all of the purchases was to get a safe mid-to-low yield dividend with fast growth. 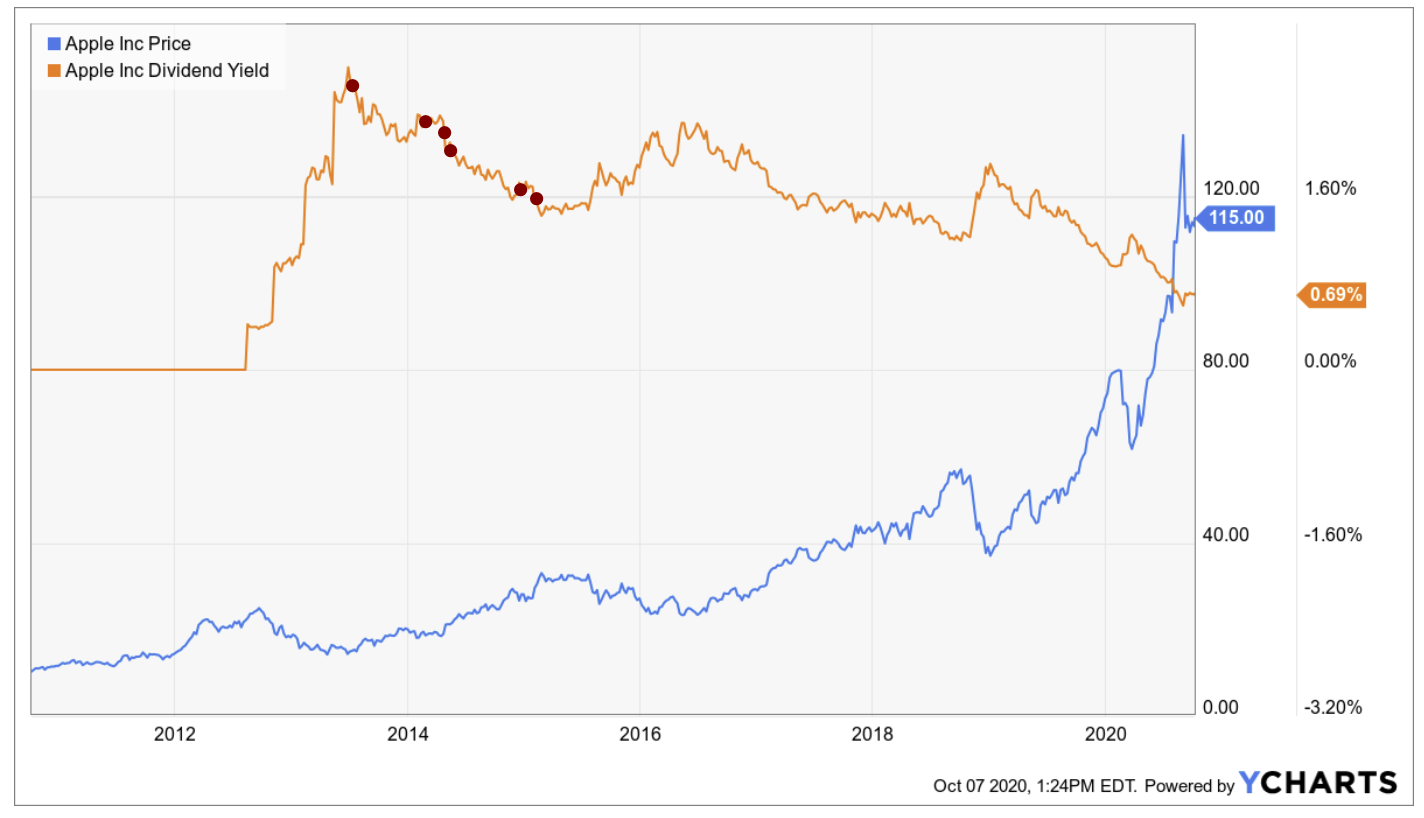 Essentially, that is how things have played out. Apple’s 5-year DGR has been over 10% per year. 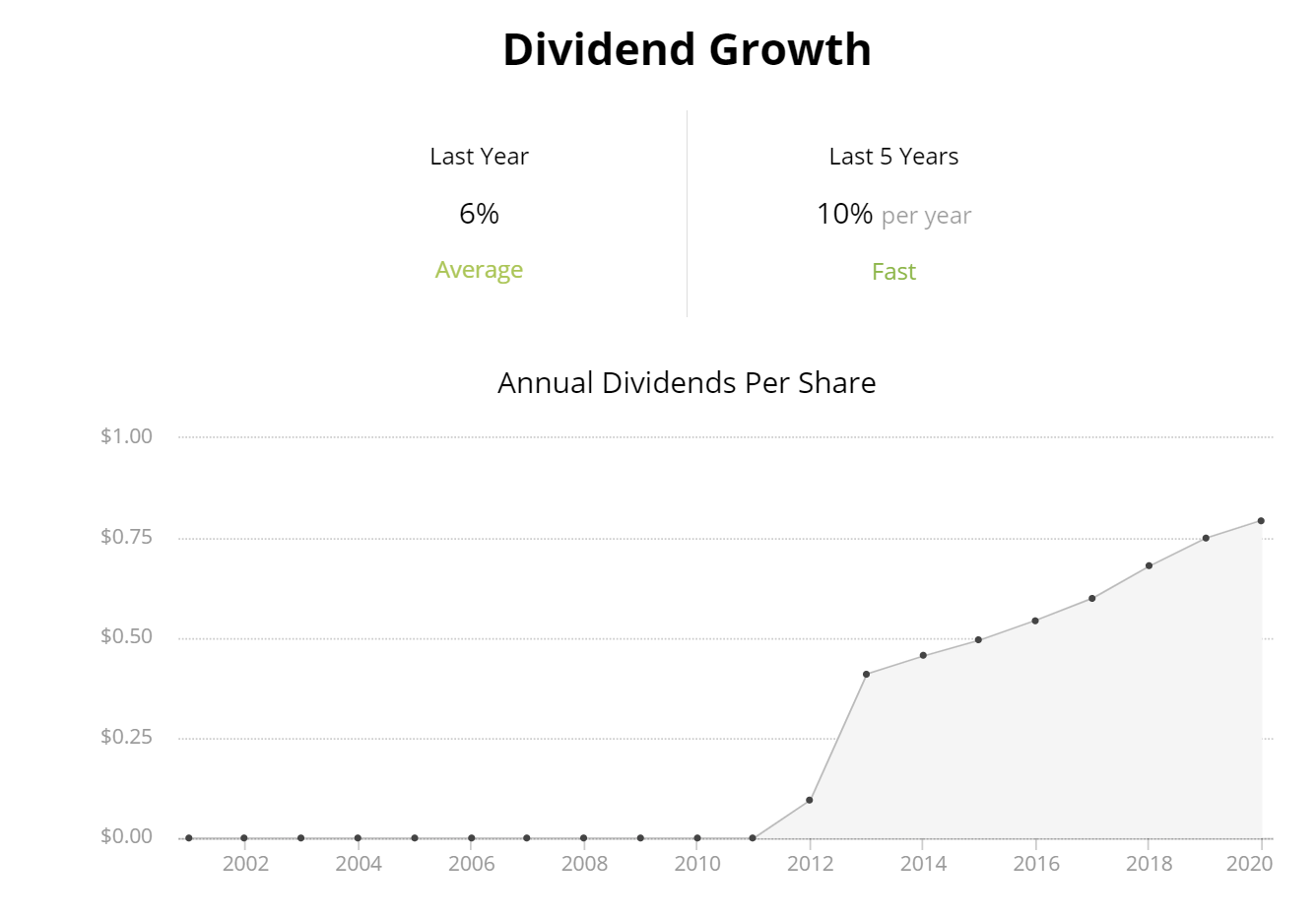 I would not buy Apple now, because I usually require a stock to have a 2.7%+ yield for my public Dividend Growth Portfolio and a 2%+ yield for my wife’s and my private investments.

That brings us to valuation. Yield and price move inversely to each other, because yield is a ratio (dividend/price) in which price is the denominator. So as price goes up, yield goes down. And Apple’s price has gone way, way up in the past couple of years.

FASTGraphs present a stock’s price on the same chart as valuation reference lines for easy visual comparison. You can draw the reference lines anywhere you like. I use two that are pre-built into the system:

Here is the FASTGraph for Apple, using the 8-year display period. You can see the blue and orange reference lines. The black line is Apple’s actual market price. 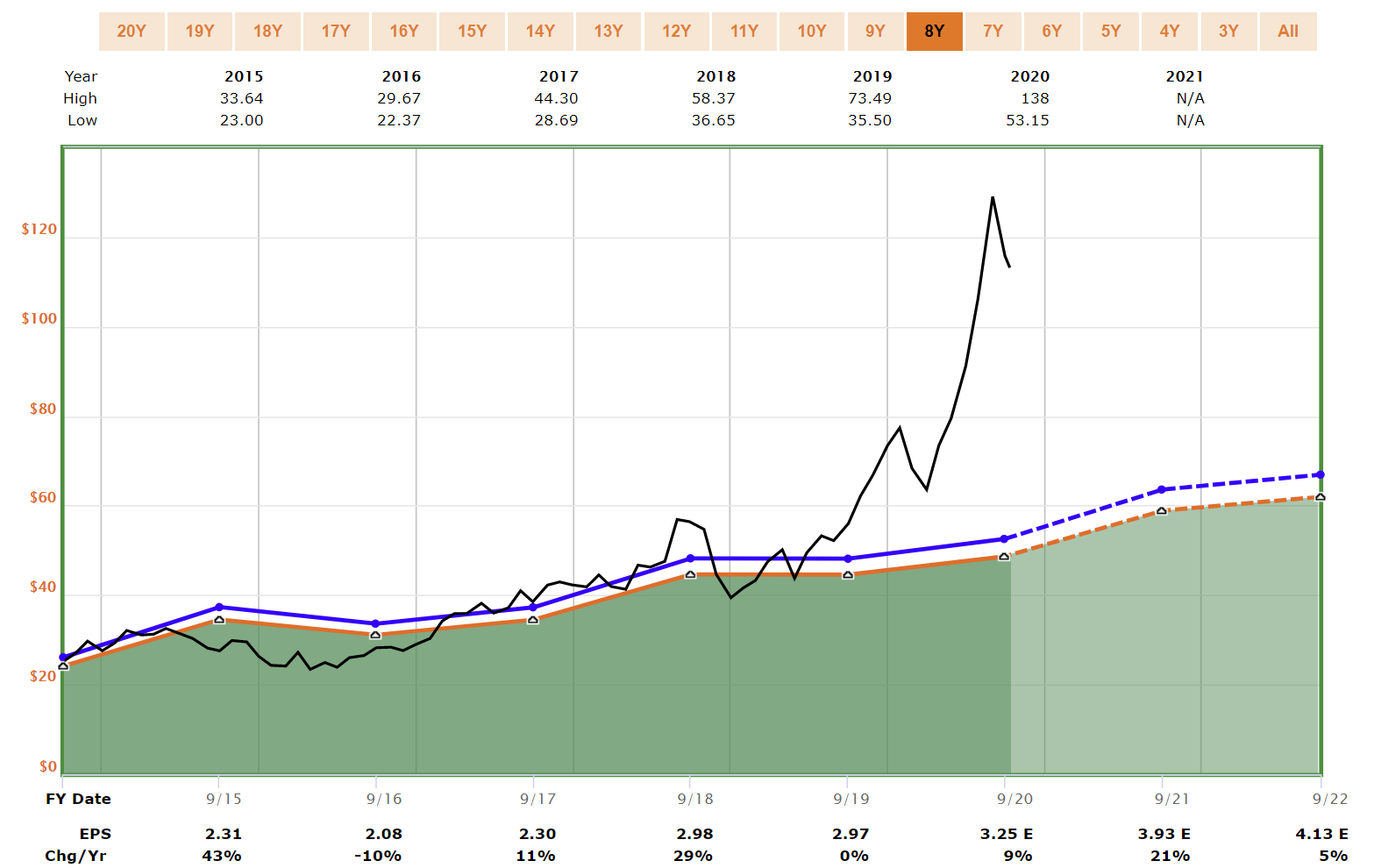 You can see that Apple has gone from being fairly or undervalued in the 2014-18 era to having its price go absolutely into the stratosphere since mid-2019.

Under both of these models, Apple is massively overvalued. To determine how far out of line its price is, I create two valuation ratios of its fair price to its actual price, using each of the reference lines in turn.

The valuation ratios then can be used to calculate fair prices under both valuation models. The formula is:

Morningstar also reckons that Apple is way overvalued. They calculate a valuation ratio of 1.59 and a fair price of $71.

Here is the reasoning behind this model: If a stock is yielding more than its historical average, that suggests that it is a better value than usual, because you are paying less for the stock’s dividends.

Another way to look at it is that, with a well-valued stock, you can buy more shares with your money. Because dividends are paid per share, you will get more dividends for your capital investment.

This final model also suggests that Apple is overvalued, as Apple’s current yield is well below its 5-year average. 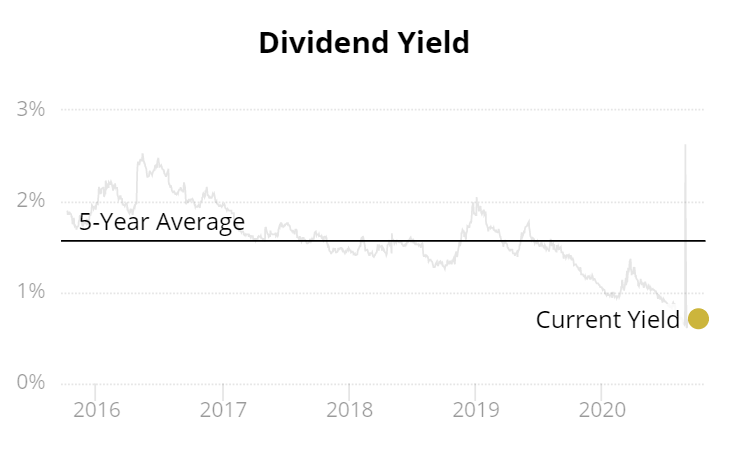 Just as with the earlier models, we make a valuation ratio by comparing the stock’s historical yield to its current yield. Apple’s 5-year average yield is 1.6%.

I usually cut off extremes of valuation ratios under this fourth model at +/- 20%, because I believe that this comparitive-yield approach is the least direct way of assessing valuation. If I cut off Apple’s result at 20% high – meaning  a valuation ratio of 1.20 – we calculate a fair price of $113 / 1.20 = $94. 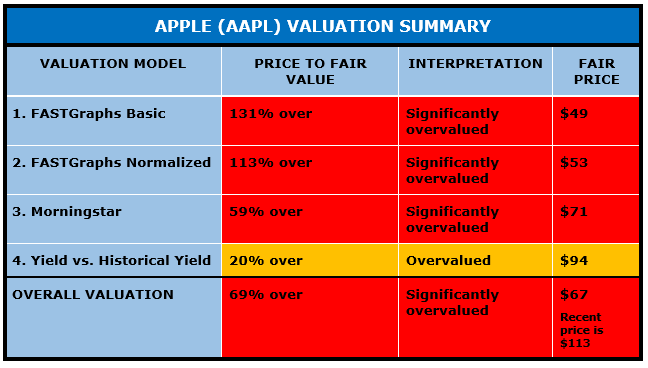 By practically any standard, Apple looks far overvalued here. Many would contend that its valuation is not rational, which is not an unknown condition in the stock market.

Normally, I like to buy discounted stocks, but for an extremely high-quality company like Apple (which scores 24/25 points on the Quality Snapshot scale), I will pay up to 10% over fair value.

That would make my own target price range $74 or below. At that price, Apple’s yield would be 1.1%.

Even the most generous of my four valuation models suggests a fair price of $94, and if you were willing to pay 10% over that, it would put you at a target price range of $103 or below. Getting there would require a 9% drop in Apple’s price or a similar raise in its earnings projections.

Apple is an elite stock, and it is also a dividend growth stock, by my way of thinking, despite its low yield.

That said, whether you’re buying it for dividends, capital gains, or growth + income, it is hard not to conclude that now is not the right time to buy it. Its valuation is simply too rich.

Apple’s presentation of its 2020 financial results will be October 29. (Apple’s fiscal year ended at the end of September.) Perhaps something will be announced that significantly changes Apple’s earnings outlook and valuation, although that is doubtful. Perhaps Apple’s price will become volatile around that presentation, which may present an unexpected buying opportunity.

This is not a recommendation to buy, sell, hold, trim, or add to Apple. My wife and I are holding our shares. After all, we are getting the income performance that we originally sought. Apple’s skyrocketing price hasn’t changed that.

As always, perform your own due diligence. Check the company’s complete dividend record, business model, financial situation, and prospects for the future. Also consider your tolerance for risk and how well the company fits (or does not fit) your long-term investing goals. 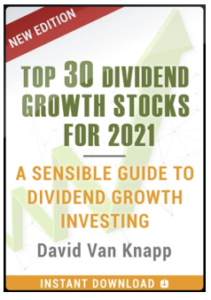 This will be my 8th e-book on dividend growth investing, and my first since 2014. The book will contain much new material, plus of course fresh analyses of 30 of the best dividend growth stocks. I “promise” that some of them will be better-valued than Apple is right now.

Please click here to get on an email list for monthly updates on the book’s progress as well as a direct notification when it becomes available. If you sign up, I will send you a free pamphlet about compounding, which is one of the keys to dividend growth investing.