Dow Jones & Company was formed in 1882 by journalists Charles Dow and Edward Jones, and the corresponding index consisted of 11 railroad companies and two non-rails.

The following decade, Dow changed the index to include a bigger variety of industrials, and on May 26, 1896, The Wall Street Journal published a list of what are now regarded as the original dozen Dow Jones stocks:

According to the Library of Congress, those 12 companies were selected specifically to represent major areas of the U.S. economy following the recession of the late 1880s. The index that resulted from data involving those businesses — the very first Dow Jones Industrial Average — was calculated at 40.94 points. 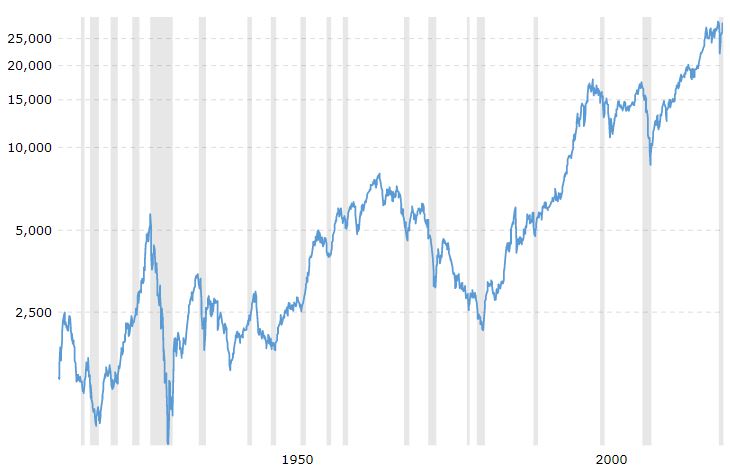 Some 124 years later, as the chart above shows, the Dow is at about 27,000 … and the composition of index is very different. After several incremental changes, 30 companies became the norm in 1928.

Although many market-watchers (including me) prefer to use the S&P 500 Index as a benchmark because it includes far more companies from a great number of industries, the Dow remains important because it is the most widely quoted yardstick of stock movements.

Today’s DJIA is managed by S&P Dow Jones Indices, which uses a committee to add and subtract companies from the index as deemed necessary.

Most recently, the 4-for-1 stock split by Apple (AAPL), the world’s largest company by market cap, forced revisions to the index because the Dow is weighted by stock price.

And with Apple ready to go from $500/share to $125/share overnight in late August, changes had to be made.

So on Aug. 31, out went ExxonMobil (XOM), Raytheon Technologies (RTX) and Pfizer (PFE). And in came salesforce.com (CRM), Honeywell (HON) and Amgen (AMGN).

You might be asking: “Hey Mike, how is this DJIA history lesson relevant in an article about your next selections for DTA’s Income Builder Portfolio?”

Although there are other pharmaceuticals in the DJIA, Amgen is now its only biotechnology component; Honeywell, an industrial conglomerate, joins fairly similar corporations 3M (MMM) and Boeing (BA) in the index.

While they are new to the Dow, neither Amgen nor Honeywell is new to the IBP, as we made two previous purchases of each.

Indeed, Amgen was the very first stock we bought for the Income Builder Portfolio, all the way back on Jan. 16, 2018.

And it has done its job nicely — bringing in significant income while also easily beating the SPDR S&P 500 Trust ETF (SPY) in total return. 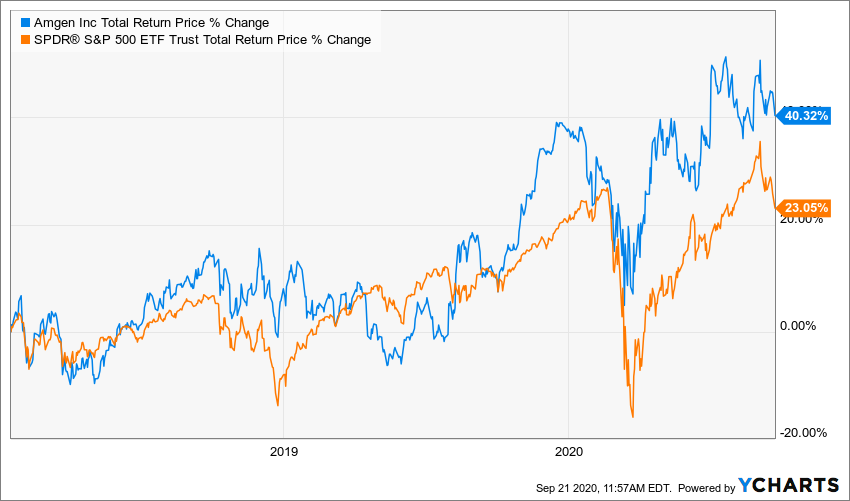 We bought Amgen again in August 2019. That year, we also made our two Honeywell purchases; read about those buys HERE and HERE.

While our position in Amgen easily has outperformed SPY, Honeywell has not done as well. So the overall market has had a slight total-return advantage over our AMGN/HON combination.

Given that we haven’t added to our positions in these two companies in more than a year, let’s take a look at what has been going on with them.

Amgen Gets An “A”

Despite the global coronavirus pandemic, Amgen turned in an outstanding first half of 2020. 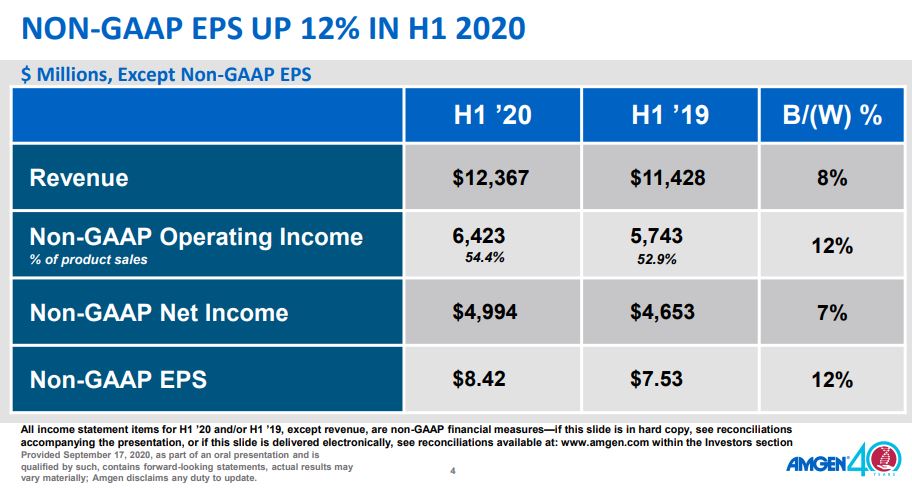 Since we last bought Amgen for the IBP, the company has continued to strengthen its product line.

Most notably, it acquired Otezla, the only oral, non-biologic treatment for psoriasis and psoriatic arthritis, from Celgene. Here was AMGN management’s take on what the acquisition would bring:

In addition to growing significantly in the United States, Amgen is realizing its goals for international expansion, specifically into China and Japan. 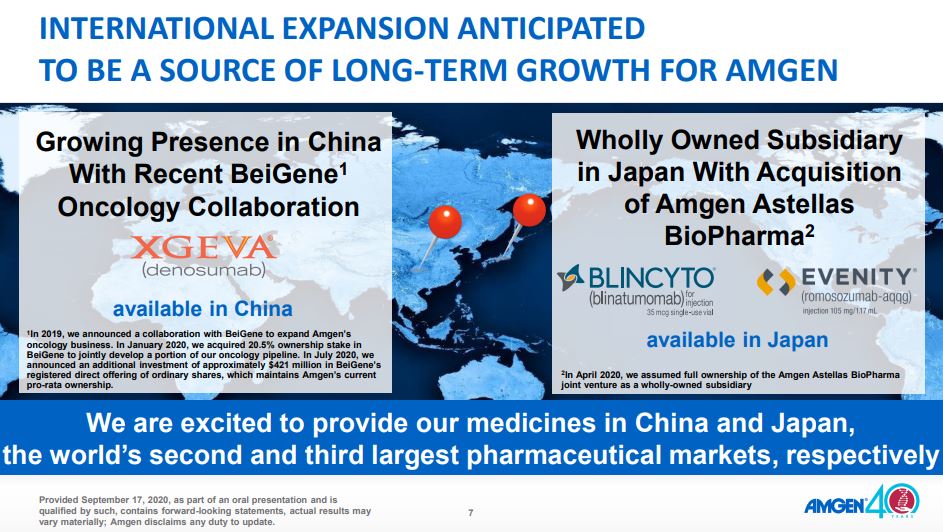 The pandemic has taken a pretty big toll on Honeywell, especially in its Aerospace and Performance Materials and Technologies segments. Its Home and Building Technologies, and Safety and Productivity Solutions divisions have fared much better. 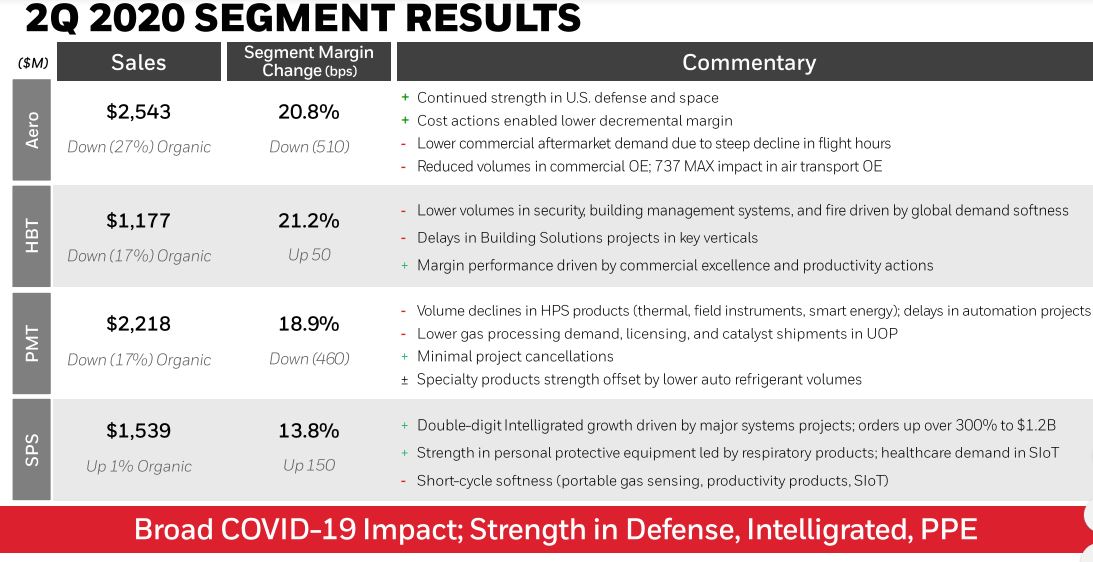 As a result of the many unknowns, Honeywell is among the hundreds of companies that has not released full-year guidance — a situation that can make investors a little uneasy.

Morningstar Investment Research Center’s analysts remain high on Honeywell, however, reminding investors to focus on the long-term (which we always try to do with our Income Builder Portfolio):

We view Honeywell as one of the highest quality companies in the diversified industrials space and assign the firm a wide economic moat. We attribute this rating primarily to intangible assets and switching costs, and secondarily due to cost advantage. Over a normalized cycle, which includes 10-year historical figures and our explicit five-year projections, we estimate that Honeywell earns about a 22% return on invested capital, inclusive of goodwill, or about 13 points above our weighted average cost of capital of 8.5%.

As a rather exclusive club, the Dow Jones seeks high-quality operations. So it’s no surprise that Amgen and Honeywell shine in what I call “quality metrics.”

I will be going more into the income implications of these purchases (as well as valuation-related data) in my post-buy article, which will be published on Wednesday, Sept. 23.

Until then, here is a rundown of dividend-related information from Simply Safe Dividends:

Given the way I opened this article, one might wonder what inclusion in the DJIA might mean for Amgen and Honeywell in the months and years ahead.

In an article I recently wrote for Seeking Alpha, I recounted what happened in 2013, the previous time there was a 3-for-3 revision to the index.

However, when looking back at the previous 3-for-3 switch, in 2004, none of the companies involved (either those entering or exiting) has performed very well. So one might say the jury is still out.

In general, being part of the longest-tenured and most-discussed index — one whose components are included in hundreds upon hundreds of mutual funds and ETFs — should be a good thing.

Still, it’s up to Amgen and Honeywell to prove, over time, that they belong in the Dow.

I remain confident in the long-term prospects of both blue-chip, dividend-growing companies, and I am excited to add to our AMGN and HON stakes within the Income Builder Portfolio.