During a 1998 speech at the University of Florida, illustrious investor Warren Buffett said:

When deciding upon which utilities to select for the Income Builder Portfolio, maybe I should have heeded that advice.

Back in 2018, NextEra Energy (NEE) became the IBP’s first position in the sector. We now have three others, but NEE has run rings around them.

Indeed, as a stock, the largest utility in the United States has been crushing most companies in most industries.

The following graphic shows our NEE position’s total return so far in 2020, compared to the three other utilities currently in the IBP — American Electric Power (AEP), Pinnacle West Capital (PNW) and Avista (AVA) — as well as the SPDR S&P 500 Trust ETF (SPY). 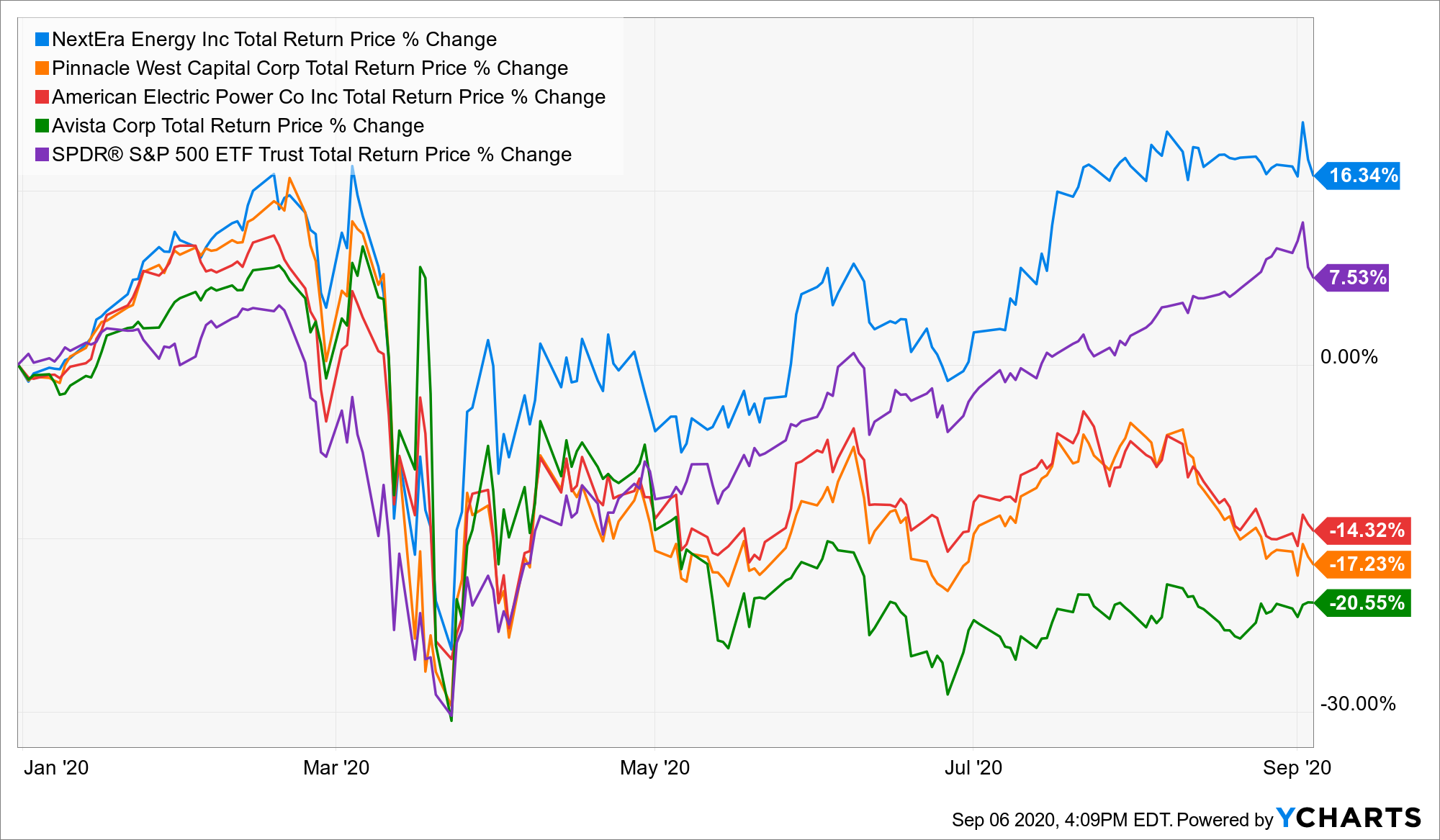 NextEra has done so well for investors that it now sports a 30+ forward P/E ratio — a figure more like that of a go-go growth stock than of a boring old utility.

Despite that seeming overvaluation, I decided to add more NEE to the Income Builder Portfolio.

However, at the risk of getting a stern lecture from Mr. Buffett, I also believe in my three other “ideas” in the sector.

Had we bought shares in SPY rather than NEE on those dates, we would have under-performed by more than a 2-to-1 margin.

Of course, had I selected NEE instead of AEP, AVA and PNW every time I got the urge to increase the IBP’s utility holdings, the portfolio’s already outstanding total return would have been all the better. 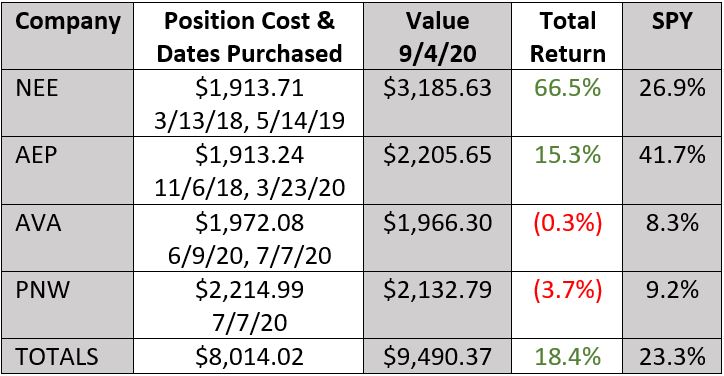 SPY’s total returns were determined by putting the dates into the DividendChannel calculator.

So why put more money into AEP, PNW and AVA rather than stick the whole thou into NEE, a proven out-performer?

Well, as much as I like to let my winners run, I also think that, with the market near its all-time high, a little value investing is prudent, too.

I will take a thorough look at valuation in my post-buy article, which is scheduled to be published on Wednesday, Sept. 9. Meanwhile, here is a table with the companies’ “quality metrics,” followed by a brief update on each:

(Morningstar does not have analysts following Avista at the present time.)

American Electric is not under investigation, though, and the company said it did not contribute to the group that is directly involved in the scandal.

Still, the situation has played a role in AEP’s stock price lagging many of its peers since the market bottomed out in March’s “coronavirus crash.”

Morningstar Investment Research Center said investors also “are concerned about AEP’s higher exposure to industrial and commercial customers than its peers,” before adding:

However, management has aggressively driven costs out of the business, allowing management to reaffirm its full-year $4.25 to $4.45 per share operating earnings guidance range, in line with our estimate. Strong year-to-date results and management’s execution on cost efficiencies have helped offset pandemic headwinds.

Despite the pandemic-related headwinds, AEP actually had better earnings in the second quarter of 2020 than in Q2 of the previous year.

Given all of that, as well as AEP’s consistent dividend growth, I feel just as good about the company as I did when I first selected it for the IBP in November 2018.

When Dominion Energy (D) announced two months ago that it would be cutting its dividend and making some major changes in its business model, I divested it from the IBP and used most of the proceeds to initiate our position in this Arizona utility.

From a share-price standpoint, PNW has struggled since then, but I learned long ago not to jump to conclusions based on such a short time span.

The lower price makes Pinnacle more attractive for purchase, and it doesn’t change the investing thesis at all.

One of my favorite things about PNW is that its market is growing like crazy — Arizona is one of the nation’s fastest-growing states, and the Phoenix metro area is booming. More people equals more housing units, and more units equals more need for electricity.

I learned about PNW from reading my colleague Dave Van Knapp’s outstanding, detailed June 26 article, and I suggest that any investors interested in the company do the same.

I don’t want to repeat all of Dave’s points, so I won’t … but I will add that Pinnacle West said during its Aug. 6 earnings call that it beat estimates for both profits and sales for Q2, and that it was restating its full-year earnings guidance.

Morningstar says PNW is on track to achieve average annual earnings growth of more than 5% over the next 5 years.

I first selected this relatively small Pacific Northwest utility for the IBP in June, and we added to the position a month later after selling Dominion.

The pandemic has been rough on AVA, as many businesses in the area have been under work-from-home orders or have shut down entirely.

CFO Mark Thies said COVID-19 resulted in a 10% decrease in commercial electric load and a 14% decrease in industrial load, but he expressed optimism about the future:

These loads decreased earnings by about $0.03 in the second quarter, and we expect to have continued lower loads throughout most of the year with a gradual recovery towards the end of the year. …

We do expect a gradual economic recovery, but prolonged high unemployment that will depress load and customer growth into 2021. We have decoupling and other regulatory mechanisms which help mitigate the impact of these load changes, the impact on our revenues for residential and certain commercial customers. Over 90% of our utility revenue is covered by regulatory mechanisms.

For investors, the 4.4% dividend yield makes the wait a little easier to take.

From its size and scope, to its history of earnings growth, to its good relationship with state regulators, to its stock performance, to its status as a Dividend Aristocrat … there is so much for investors to like about NEE. 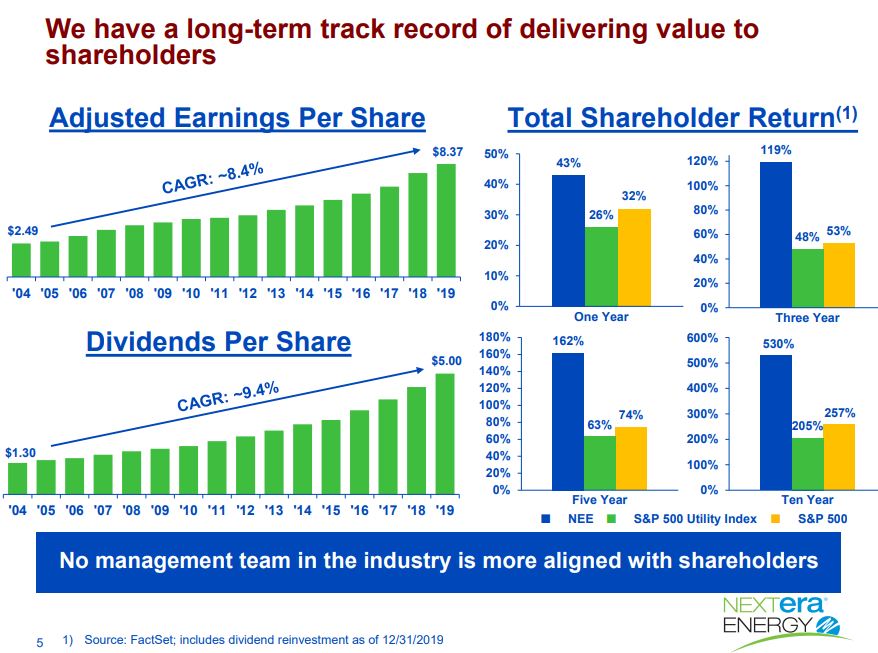 Yes, it’s expensive, but it’s not as if we’re going to be buying a ton of it here for the IBP. Just a nice little add-on purchase to our already robust position.

I will be going more into the income implications of these purchases in my post-buy article.

Until then, here is a rundown of dividend-related information from Simply Safe Dividends:

My best utility idea as caretaker of the Income Builder Portfolio obviously has been NextEra Energy. Heck, it has been one of my very best investing ideas — period.

At the risk of being cut out of Uncle Warren’s will, however, I still believe that American Electric, Pinnacle West and Avista will be valuable IBP components for years to come.

Besides, one of the portfolio’s main purposes — maybe even the main purpose — is to present a variety of interesting candidates for research, and there sure are a lot of fine utilities available.

As always, I urge investors to conduct their own due diligence before buying these or any stocks.