At the end the Income Builder Portfolio’s first year of existence, 2018, we owned 3 companies in the Information Technology sector — and those positions were a combined 10% underwater.

I guess it’s safe to say things have turned around a wee bit since then. 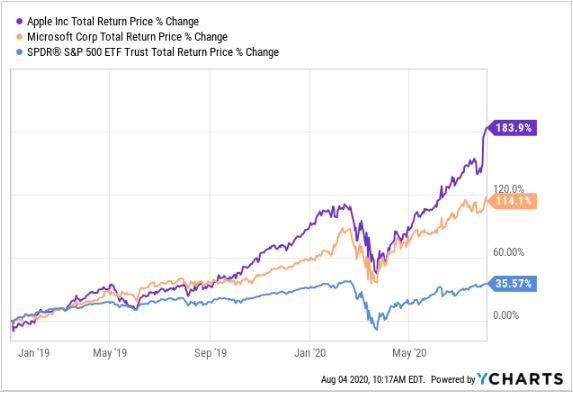 Led by Apple and Microsoft, tech has driven the IBP to market-beating heights … and who are we to argue with success?

We added our eighth company from the sector on Tuesday, Aug. 4, when I executed a purchase order on Daily Trade Alert’s behalf for 7 shares of Automatic Data Processing (ADP) at about $136.22 each. 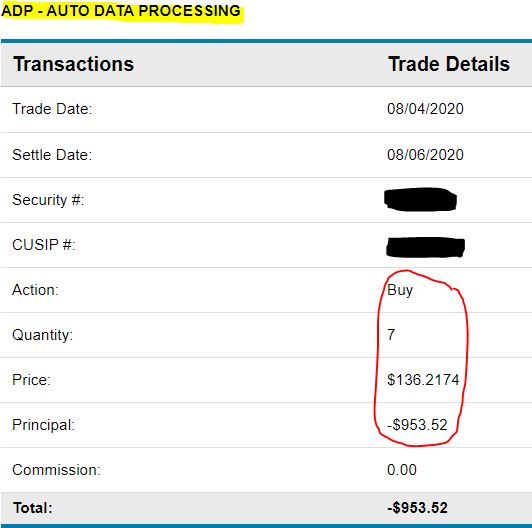 Information Technology has grown to become the most represented sector in the IBP, at nearly a quarter of the portfolio.

Tech stocks also form a significant part of my Grand-Twins College Fund — the other public, real-money portfolio I’m putting together.

There were several reasons I selected ADP for the IBP, and its 45-year history of annual dividend growth ranks high on the list.

If one bought $10,000 worth of Automatic Data Processing 17 years ago, one would have received $9,928 in dividends since then (red-circled area of the following FAST Graphs image) — almost enough to have covered the entire initial purchase. 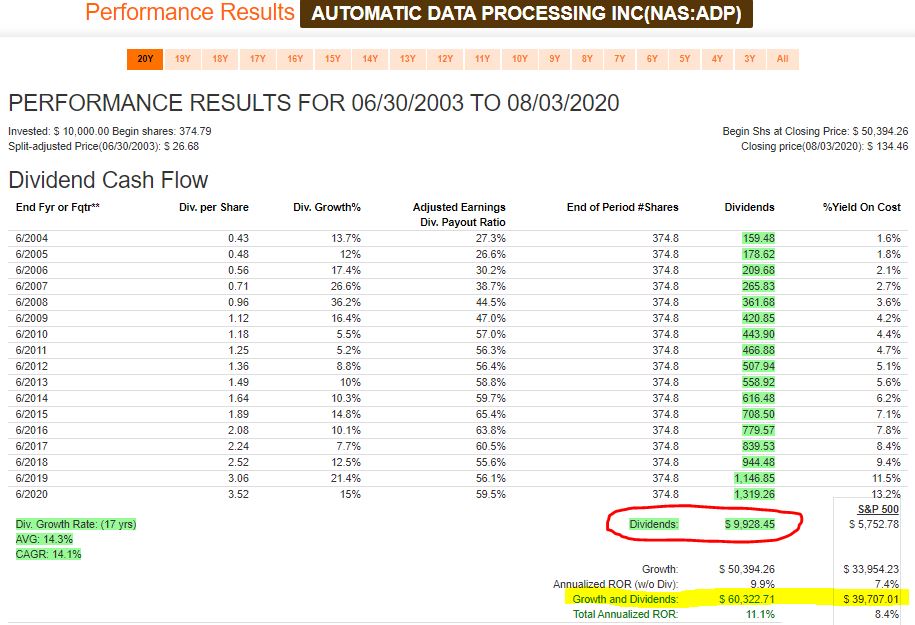 Thanks in great part to its spectacular dividend growth, ADP crushed the S&P 500 Index during that time frame, with a total return more than $20,000 higher (yellow highlight above).

Here is a graphic from Simply Safe Dividends that provides a quick look at the largest payroll-services provider in America: 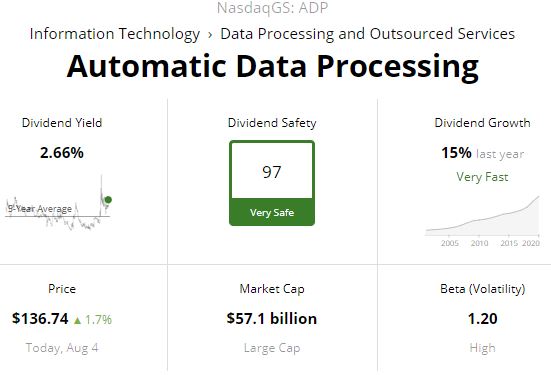 A lot goes into the sky-high Dividend Safety score that SSD has assigned, and one factor is that ADP always creates more than enough free cash flow to pay the dividend.

In the following FAST Graphs image, the orange line represents the company’s FCF, while the white line indicates the dividend. 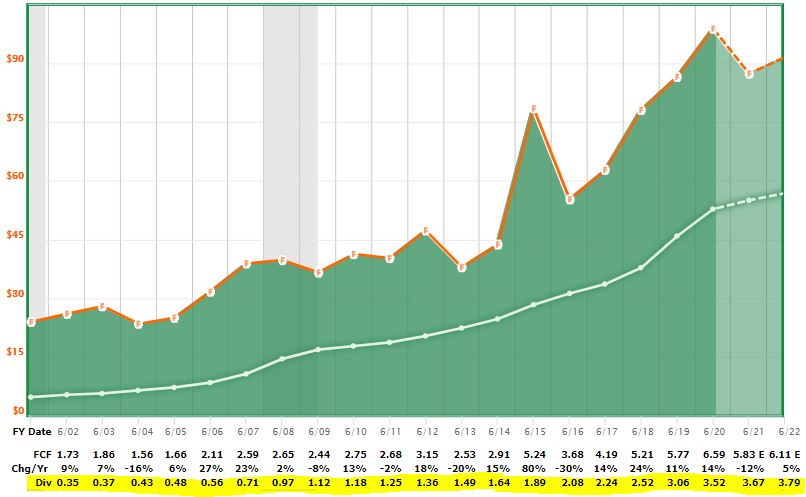 Come Oct. 1, the IBP will receive 91 cents for each of our 7 shares. That $6.37 will be reinvested right back into ADP stock, as per the portfolio’s Business Plan, buying about .046 of an additional share.

Then, in mid-November, the company is expected to announce its 46th consecutive annual dividend raise.

ADP usually hikes the amount by 12-15%, but I’ll be a little conservative because of the global pandemic and figure a 6.5% increase to .97/share.

That will happen over and over again, quarter after quarter — and not just with ADP but with every stock we own. Which explains how this project got its name.

Reflecting the uncertainty due to the COVID-19 crisis, analysts are all over the map in regards to ADP.

Verus Analytics, which is pretty stingy with its “Buy” ratings (yellow highlight below), says ADP is worth picking up here. But in a survey of analysts provided by Fidelity, “Hold” is the dominant rating — and a few even say to sell the stock.

Credit Suisse, meanwhile, is bullish despite the headwinds that the company faces, and envisions about 25% price appreciation over the next year. 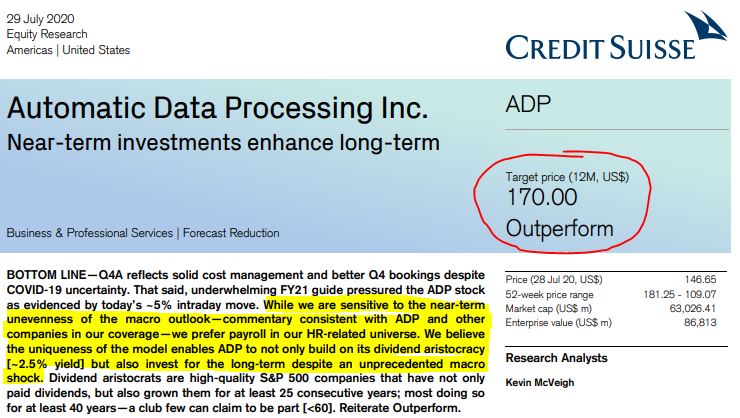 Value Line has ADP in its model portfolio of “Stocks with Above-Average Year-Ahead Price Potential,” though the list was compiled before the most recent earnings report said to expect an earnings decline in the next fiscal year. 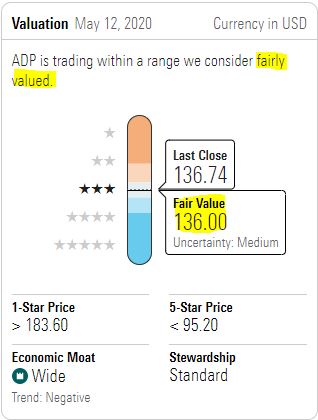 More from Morningstar on valuation:

“As expected, the coronavirus and the resulting shock to employment levels weighed on ADP’s fiscal fourth quarter results. Further, management’s guidance points to additional pressure going forward. Still, we think the wide-moat franchise will successfully weather this storm, and will maintain our $136 fair value estimate. … We forecast a slight dip in revenue in fiscal 2021 before a strong rebound the following year.”

CFRA’s analysts pretty much agree with the folks at Morningstar.

The red-circled areas on the right show that the current “blended P/E ratio” is quite a bit lower than the normal ratio of the last decade.

Meanwhile, the pop-out boxes on the graph itself show that the blended P/E hasn’t been this low since March 2013. If one had invested in ADP back then, one would have enjoyed a 14.3% annual total return. 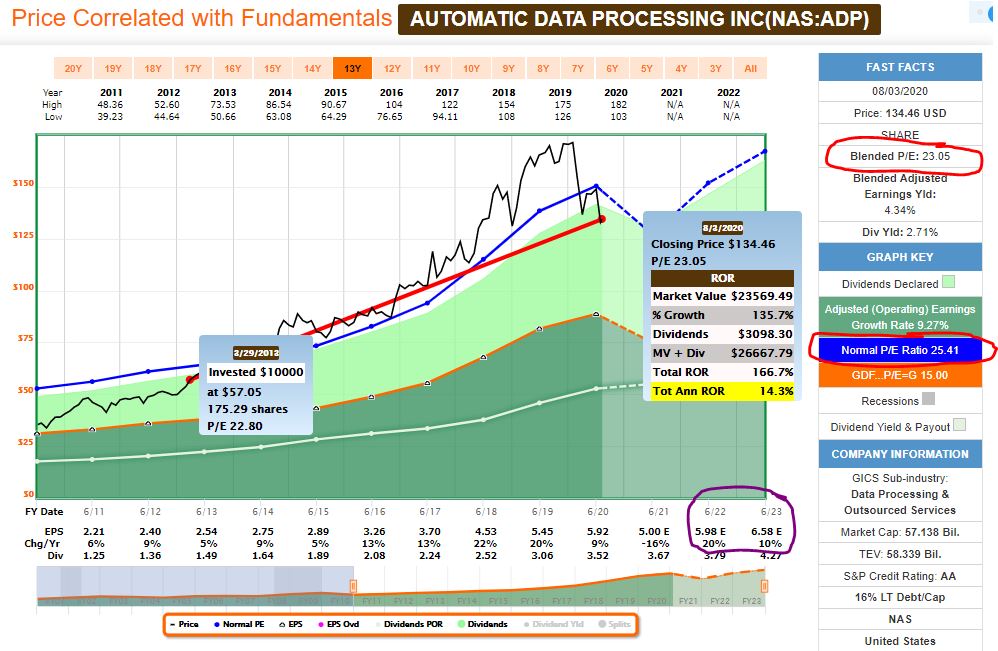 Importantly, for one to view ADP as undervalued, one needs to assume that double-digit-percentage earnings growth will resume in the fiscal year that begins July 1, 2021 (as circled in purple). If the coronavirus lingers well into next year, that will not have been a very prudent assumption.

Apple and Microsoft now make up nearly 12% of the value of our 34-stock Income Builder Portfolio.

It is not realistic to think that Automatic Data Processing can go on the kind of incredible run AAPL and MSFT have been on, but I obviously consider ADP to be very “investable.”

Indeed, after researching the company for the IBP, I was inspired to buy some shares of this high-quality, dividend-growing tech stock for my own portfolio. I executed this purchase order on Friday, July 31:

I was fortunate to buy my stake at a bit lower price than we had to pay two sessions later to get it for the IBP.

As the years go by, I expect to add to the ADP positions in both portfolios — so a small difference in price in August 2020 will be but a tiny blip when we look back on it someday.