Stocks from the Consumer Staples sector are … well … staples of many Dividend Growth Investing portfolios.

It makes sense. Those companies, some of which have been around for generations, make products that people want, need and use regularly.

Those companies also tend to kick out income to shareholders, usually with annual raises. Indeed, nearly a quarter of the Dividend Aristocrats are Consumer Staples — the highest percentage of any sector within that exclusive “club” of 25+ year dividend growers.

With that sector distributing so much income, it should be of little surprise that I’m always looking to add Consumer Staples to our Income Builder Portfolio.

The problem is that income-hungry investors have bid up the highest-quality blue chips, with some trading at preposterous 30+ forward P/E ratios.

Nevertheless, on Tuesday, July 21, I added to two of our positions in the sector — soda and snack giant Pepsi (PEP), and booze and pot purveyor Constellation Brands (STZ).

Neither is a bargain nor outrageously expensive, as will be discussed later in the valuation section of this article, so I felt fine about putting a little more of Daily Trade Alert’s money into each. In addition to PEP and STZ, I also executed a purchase order on DTA’s behalf for a few shares of banking conglomerate JPMorgan Chase (JPM).

DTA allocates $1,000 every couple of weeks for the IBP, and this time I decided to split it three ways.

Using Schwab’s “Stock Slices” feature, which lets investors buy partial shares, we paid about $134.50 per share for Pepsi, $98.78 for JPMorgan Chase and $180.48 for Constellation.

With the purchases, Consumer Staples now make up about 13% of the IBP, just behind Utilities (14%) as the fourth-largest sector representation. (Information Technology is at 22% and Healthcare 17%.)

During the 31 months since we launched the portfolio, I think we have compiled a nice mix of companies in the sector. 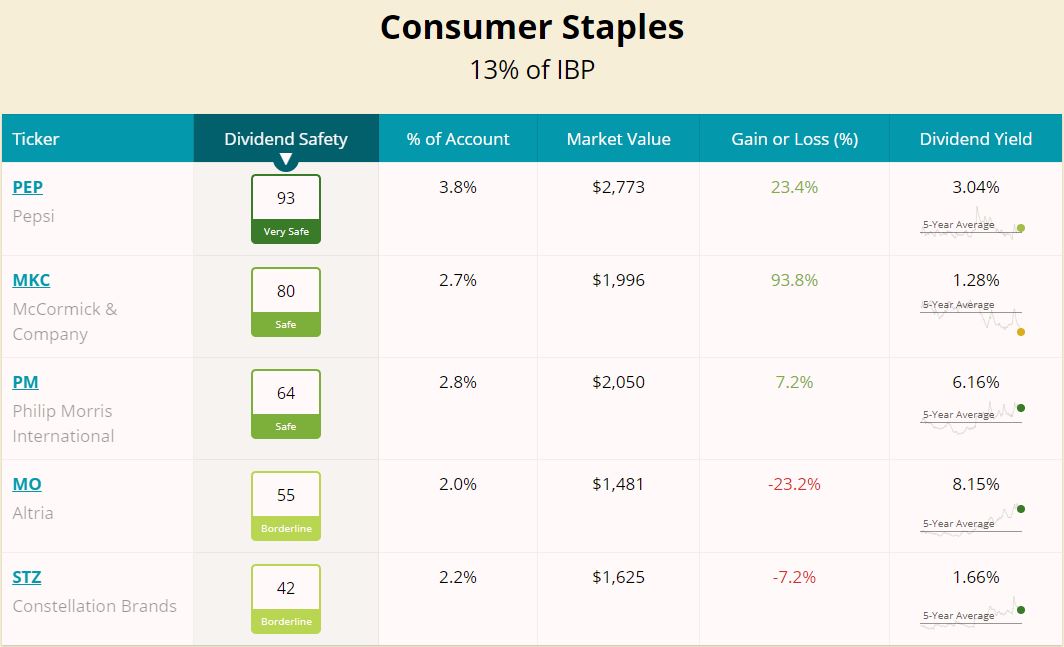 Pepsi, which has been growing its payout for 48 consecutive years, is one of the most popular holdings of DGI proponents due to its relatively safe and reliable dividend.

At the low end of the yield spectrum is spice-maker McCormick (MKC), which has been increasing its dividend for 34 years.

Constellation Brands is the relative newcomer, with only a 5-year dividend-growing streak; STZ also has a low-ish yield and an unproven commitment to income that is reflected in its sub-optimal Simply Safe Dividends “safety” score of 40.

Bucks From Beverages & A Bank

I discussed the reasons for my selections of PEP, STZ and JPM in my previous article; dividends definitely were a major attraction.

As the following table indicates, the shares bought Tuesday are projected to add about $28 to the IBP’s annual income stream.

The approximately $164 in annual income that the three positions now are expected to generate represents about 7.6% of the portfolio’s total yearly income production.

The highlighted areas of the table from our official IBP page illustrate how the companies are positioned as income producers, relative to the other 30 holdings. 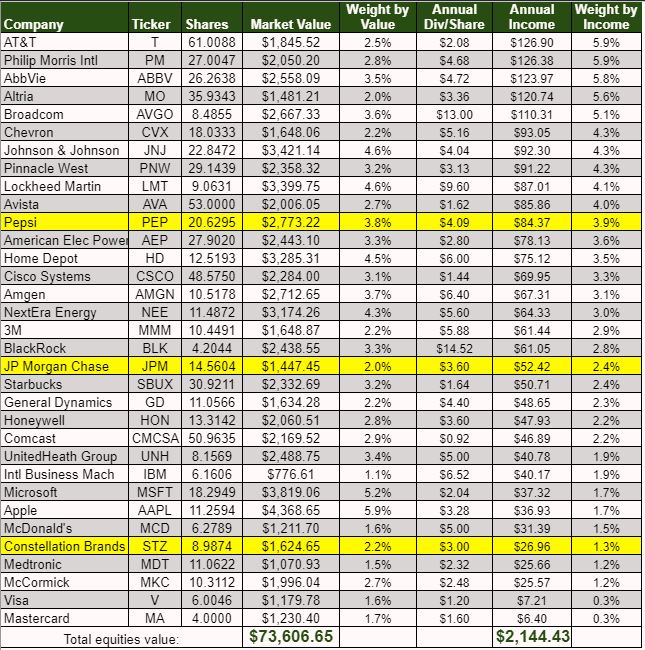 More immediately, JPMorgan is the first of the three to pay its next quarterly dividend. Because this add-on purchase wasn’t made by the ex-dividend date, the $10.07 distribution received July 31 will be based on the 11.1893 shares held before this buy.

The STZ and PEP buys were made before each company’s next ex-div date, so each will receive dividends based on their new, higher share totals.

In each of the three cases, the dividend will be reinvested back into the company from whence it came. That process, informally known as “dripping,” is mandated by the IBP Business Plan.

That compounding action will continue, not only with PEP, JPM and STZ but with all current and future components. That’s how an income stream gets built, and it’s how this project got its name.

A quick look at Reuters’ weekly survey of analysts shows that professional market-watchers generally are bullish on each of these three companies.

Following is some insight regarding each company’s valuation, as provided by Morningstar Investment Research Center and FAST Graphs. 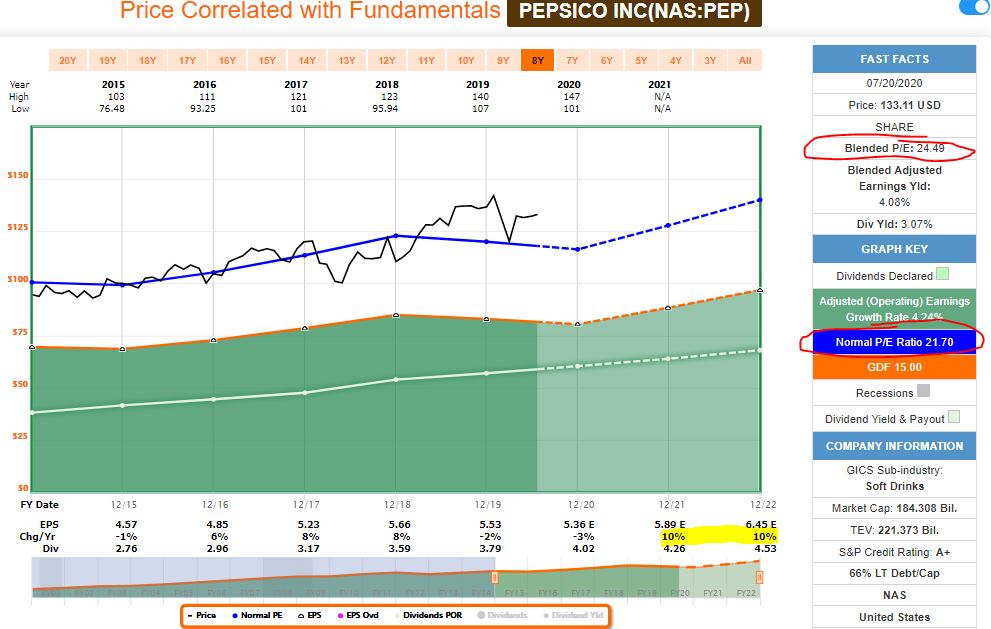 Highlighted in the above images were Morningstar’s “moat” and “stewardship” ratings for PEP, as well as analysts’ expectations for future earnings growth, as provided by FAST Graphs.

I will be pointing those out in the STZ and JPM examples, as well. 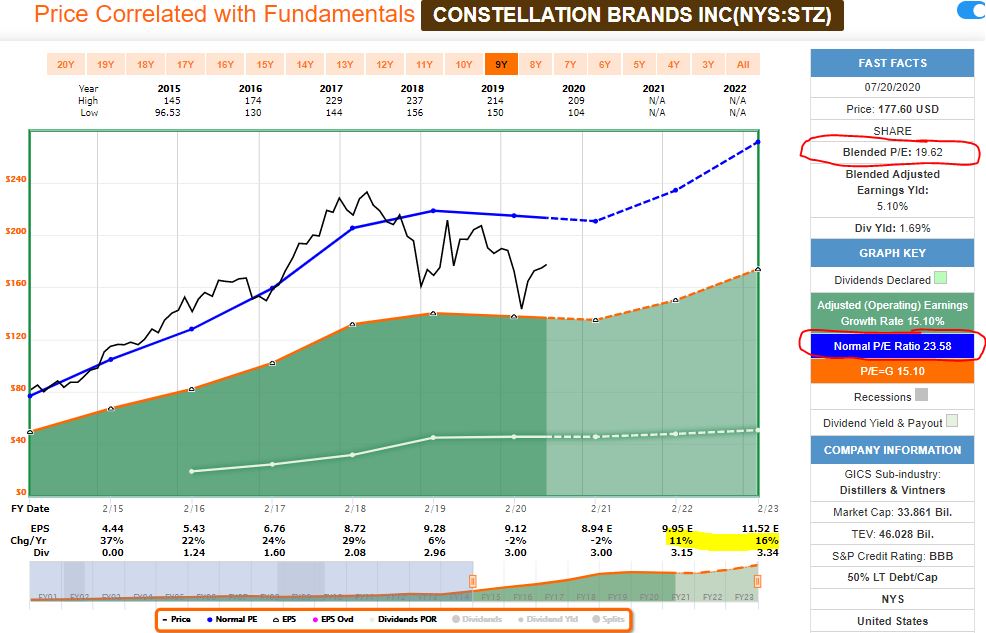 Morningstar also believes JPM has quite a bit of room to run, while FAST Graphs seems to indicate the company currently is fairly valued. 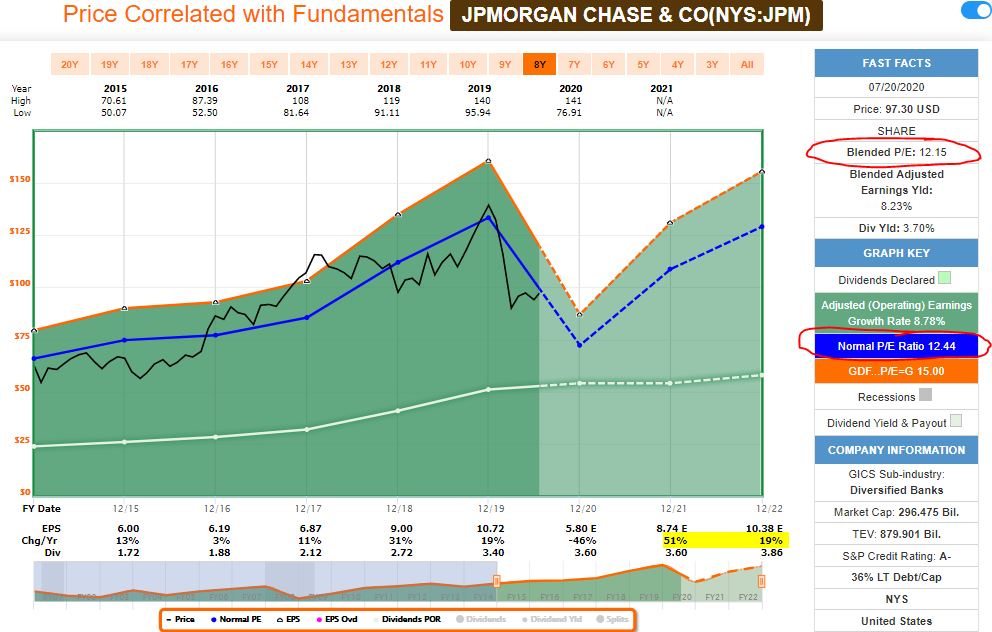 I feel good about throwing a few hundred more bucks at the best bank in the land, too.

I am not scheduled to make another selection for the Income Builder Portfolio for almost two weeks.

During that time, will this crazy stock market keep going higher despite the coronavirus pandemic ravaging the economy? Or will there be a pullback, presenting opportunities to grab Consumer Staples — and everything else — at more appealing prices?

Meanwhile, I do expect to make more purchases for my real-money, “growth & income” Grand-Twins College Fund by the end of the month, so be on the lookout for my next article.