If you are a Dividend Growth Investing practitioner (or even a “regular” investor), would you buy shares of a company that just announced a 33% dividend cut?

Would you want to own a piece of a business that has sold off significant assets at a steep discount — a move that will be dilutive to earnings, that makes the stock look overvalued, and that will prevent the dividend from reaching its previous height for at least 8 years?

Personally, I have to say I would avoid buying that company. Heck, had I been considering it, I probably would strike it from my watch list.

Which brings us to Dominion Energy (D), the large southeastern utility that had been the Income Builder Portfolio’s No. 1 income producer … with emphasis on the words “had been.”

On Tuesday, July 7, I executed an order on Daily Trade Alert’s behalf to divest the IBP’s 42.6414-share Dominion position; I used the proceeds to initiate a position in Arizona utility Pinnacle West Capital (PNW) and to add to our existing holding in northwestern utility Avista (AVA).

The D full and partial shares sold at the same price moments apart. The AVA limit order filled partially at $35.50 and I later had to increase my order to $35.82 to get the rest. Between the two AVA transactions, 29 shares of PNW were bought; I then allocated the remaining $11 to buy a partial share of PNW via Schwab Stock Slices.

Two days before we dropped Dominion from the IBP — on the sultry Sunday of the holiday weekend — Dominion issued two statements signaling a fundamental change to the way it conducts its business.

First, Dominion agreed to sell more than 7,700 miles of natural gas storage and transmission pipelines, as well as about 900 billion cubic feet of gas storage, to Berkshire Hathaway (BRK.B) in a $9.7 billion all-cash deal that includes Berkshire assuming about $5.7 billion in debt.

Shortly thereafter, Dominion announced that it and fellow southeastern utility Duke Energy (DUK) were giving up on their controversial, multi-year, $8 billion Atlantic Coast Pipeline endeavor “due to ongoing delays and increasing cost uncertainty which threaten the economic viability of the project.”

Dominion, which only a few months earlier had bought out the 5% stake held by Southern Company (SO) so it could take 53% ownership of the ACP, said canceling the project would force it to take a charge against earnings of up to $3.2 billion.

Dominion CEO Thomas Farrell said the moves would let his company focus on its government-regulated utility operations, with an emphasis on renewable energy in the decades ahead. 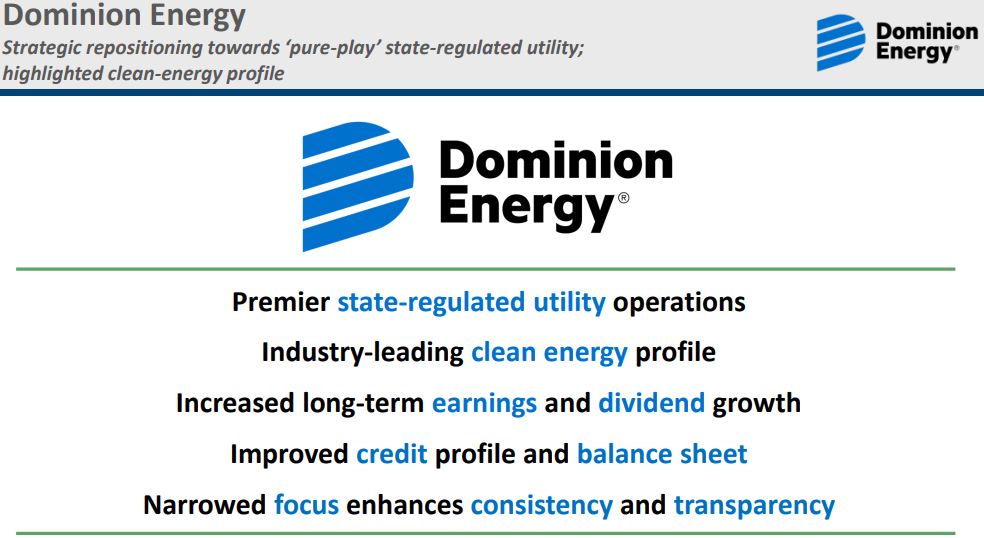 For the long term, all of that very well might end up being fantastic for the company and its investors. Or it might not. We simply don’t know enough today to make that determination.

What we absolutely do know is that for the short and intermediate term, Dominion is a slow-growing business in a slow-growing industry trading at nearly 20 times forward earnings — putting its valuation in the same stratosphere as the very best-performing utilities.

Down Goes The Dividend

I found that to be very interesting, given that here is what Morningstar’s newsletter has been saying to explain why Dominion is part of its “Dividend Select Deferred Portfolio”:

That capsule had 5 lines about Dominion … and 3 of the 5 lines praised the natural-gas pipeline operation that the company will no longer own.

Sorry, but if there are any “well-positioned assets” in the pipeline realm “driving the potential for solid growth for several years,” the beneficiaries will be Berkshire Hathaway, its CEO Warren Buffett, and their investors.

Dominion investors? They get a sizable dividend cut.

That’s right: Because the transactions will knock Dominion’s earnings down several pegs, the company will be lowering its annual dividend from $3.76 per share to about $2.50.

Major corporations have entire departments dedicated to putting positive spin on negative news, and Dominion’s spinners were working overtime on this one. 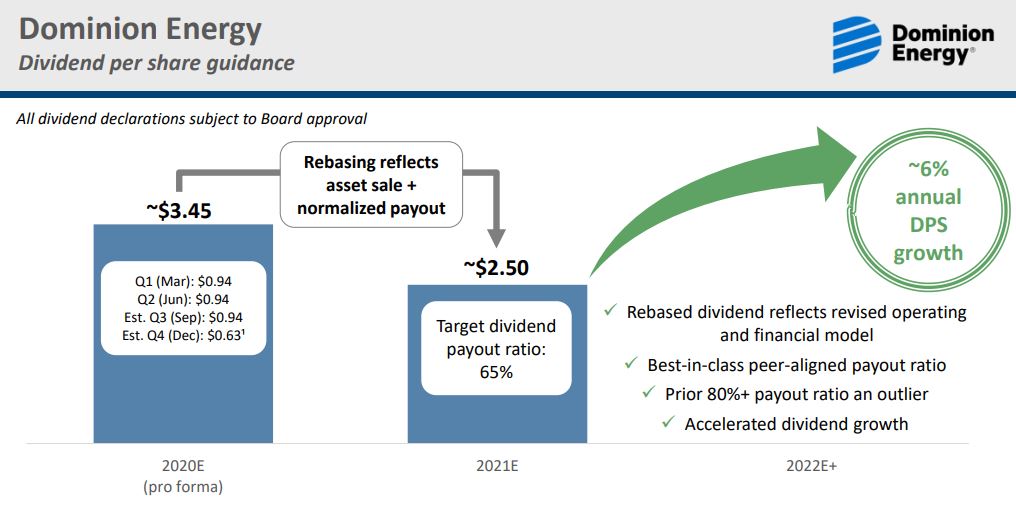 By “rebasing” the dividend, Dominion says, it will improve the company’s balance sheet, lower the payout ratio and make it possible to raise the dividend by 6% annually beginning in 2022.

Of course, after a few years of having increased its dividend too much too quickly to attract investors, D already had been justifying its recent smaller (2.5%) dividend hikes with talk of improving the balance sheet and lowering the payout ratio.

It will be 2028 before Dominion’s dividend returns to what it was before the cut — and that’s only if the company follows through on the promised increases. 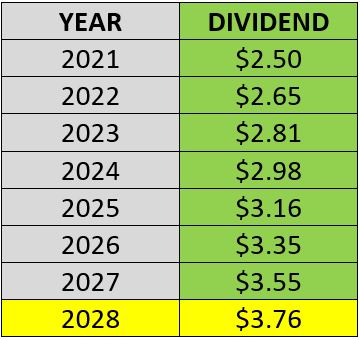 Even for DGI proponents, dividends aren’t the be-all and end-all. Nevertheless, one reason investors are attracted to utilities — despite their relatively slow earnings growth — is that their dividends are perceived as reliable.

For Dominion, the dividend also has been a major part of its total return.

The following FAST Graphs image shows that over the last decade, dividends have generated more than 25% of the company’s total return.

The red-circled area indicates an average annual return of 6.3% not counting dividends, while the blue-circled area shows a 9.5% return with dividends included. Both figures trail the S&P 500 Index, but the latter is at least in the ballpark … thanks to the income that D’s shares produced. 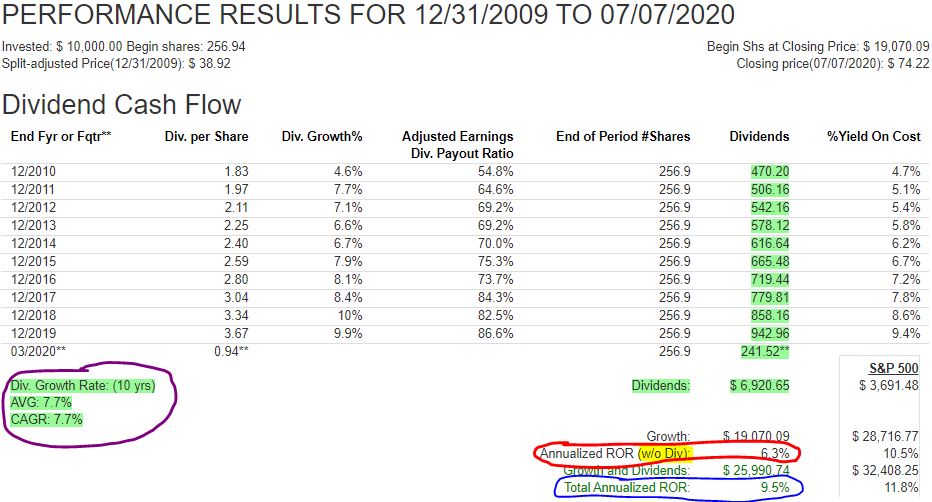 Dominion’s IBP position was expected to produce some $160 in dividends over the next year, representing more than 7% of the portfolio’s income.

At the reduced rate, the income produced by D would have fallen to about $107.

Would the Income Builder Portfolio have survived? Of course, but that’s not the point. It’s called what it’s called for a reason — the income stream is supposed to be built up, not knocked down.

By replacing Dominion with Pinnacle West and Avista, we captured more than half of the income that would have been lost had the portfolio simply held onto D.

I don’t believe I have settled for lesser-quality investments, either. For instance, Simply Safe Dividends says Pinnacle West’s dividend is far “safer” than Dominion’s, especially after SSD just lowered D’s score to 40.

Dominion has a BBB+ credit rating — one rung lower than Pinnacle West’s A-, and one rung higher than Avista’s BBB.

(Worth noting: Various ratings for Dominion certainly could improve if the company executes its plan well. There are a lot of “ifs” for investors to digest now.)

Both PNW and AVA will have much higher yields than Dominion after D’s new dividend policy takes effect; and both are more attractively valued, with forward P/E ratios in the 15-17 range.

And it’s not as if Dominion has a long history of outperforming those companies on a total-return basis. Over the last 5 years, PNW has crushed D, while AVA is only a touch behind despite having been involved in a takeover bid that ultimately failed. 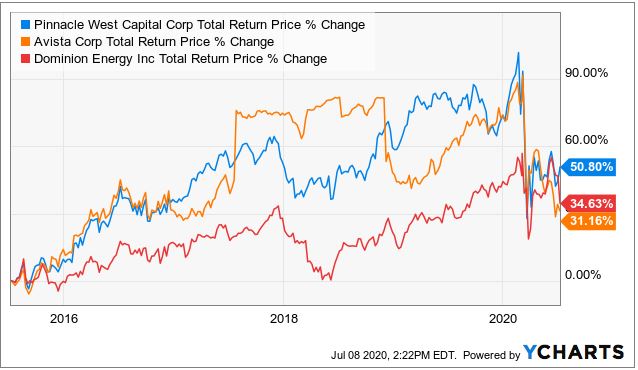 Rather than go at length into the reasons I chose Pinnacle West and Avista, I will call your attention to a few articles that were published recently on this site.

Just last week, my colleague Dave Van Knapp selected PNW as his Dividend Growth Stock of the Month, and his typically thorough research can be seen HERE.

Avista, meanwhile, was my first of two June buys for the IBP; I wrote about the company both before (HERE) and after (HERE) the purchase.

I believe DGI is a strategy for long-term investors and reluctant sellers. Nevertheless, when a company makes fundamental changes to its business model — changes so significant that they affect future earnings, revenues and dividends — even buy-and-holdish investors need to ask themselves some difficult questions.

Question No. 1: Is the company still the best choice to help my portfolio meet its goals?

The Income Builder Portfolio’s goals are articulated clearly in its Business Plan:

Build a reliable, growing income stream by making regular investments in high-quality, dividend-paying companies. The secondary goal is to build a portfolio that will experience good total return, much of which will occur organically because of the excellent companies owned.

With Dominion making such a fundamental shift, I believe the IBP’s goals are more likely to be met by reallocating those several thousand dollars into Pinnacle West and Avista.

Maybe one day I’ll revisit D as a possibility for this portfolio, but I first want to see if the company can pull off all the wonderful stuff it claims will happen once the pipelines belong to Buffett.

As always, investors are strongly urged to conduct their own due diligence before buying or selling any stock.