When analyzing some companies, their business models are so complex that it’s difficult to figure out how, exactly, they make money.

This quick summary from CFRA equity analyst Colin Scarola gets right to the nitty-gritty:

We estimate 99% of LMT revenue is generated from government contracts, primarily with the U.S. Department of Defense, but also from other U.S. agencies and foreign governments.

Human beings have an insatiable appetite for weapons. We always want more of them — the more powerful, the better — so we can harm our enemies and try to prevent them from harming us.

Few, if any, companies are better at providing the necessary means for all of that harming (and not harming) than Lockheed Martin, which is why we now have bought it on three separate occasions for our Income Builder Portfolio.

On Tuesday, July 7, I executed a purchase order on Daily Trade Alert’s behalf for about $1,000 worth of LMT. 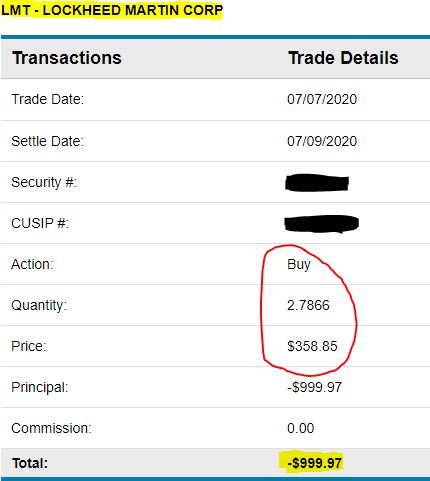 I used Schwab’s “Stock Slices” to make the buy — which is why we received partial shares. (I mostly use the same method in building my real-money Grand-Twins College Fund, which also holds LMT.)

When talking about stocks, I don’t like using a term like “sure thing,” because even high-quality defense companies such as Lockheed Martin have up and down cycles.

Long-term, however, I’m pretty darn confident LMT will make money hand over fist — and as a result, I expect shareholders will end up being quite pleased.

The defense focus exposes LMT to the risk of unpredictable geopolitical or economic conditions leading to lower than expected defense spending. We see this risk mitigated by LMT’s exposure to high priority, advanced technology programs, however, which are likely to avoid cuts even in lower spending environments, in our view. Further, government defense spending has historically increased regardless of recessions, limiting LMT’s cyclical risk.

That last sentence really resonates with me. As I explained in my previous article, Lockheed Martin has held up well throughout the current economic downturn caused by the COVID-19 pandemic.

And then there’s this:

Because Republicans tend to be more “hawkish” than Democrats when it comes to military issues, many LMT investors might think they’d be worse off if Joe Biden takes the presidency from Donald Trump in November.

Then again, as the following images produced by the DividendChannel.com calculator show, Lockheed Martin averaged 20% annual total return during Democrat Barack Obama’s time in the White House (top image) vs. about 13% while Trump has been in office:

Democrat or Republican, recession or expansion, wartime or peacetime, LMT has been A-OK as a long-term investment.

We view Lockheed Martin as the highest-quality defense prime contractor, given its exposure as the prime contractor on the F-35 program and its missile business. The defense budget and the allocation of the budget is a political process, which is inherently difficult to predict. Therefore, we favor companies with tangible growth profiles through a steady stream of contract wins, ideally to contracts that are fulfilled over decades. … For instance, the F-35, which accounts for about 30% of the firm’s revenue, will be sustained through 2070.

Through 2070! Wow! How many other businesses have multibillion-dollar commitments for the next 50 years?

The following table from FAST Graphs indicates how Lockheed Martin has crushed the overall market over the last 10 years in total return: 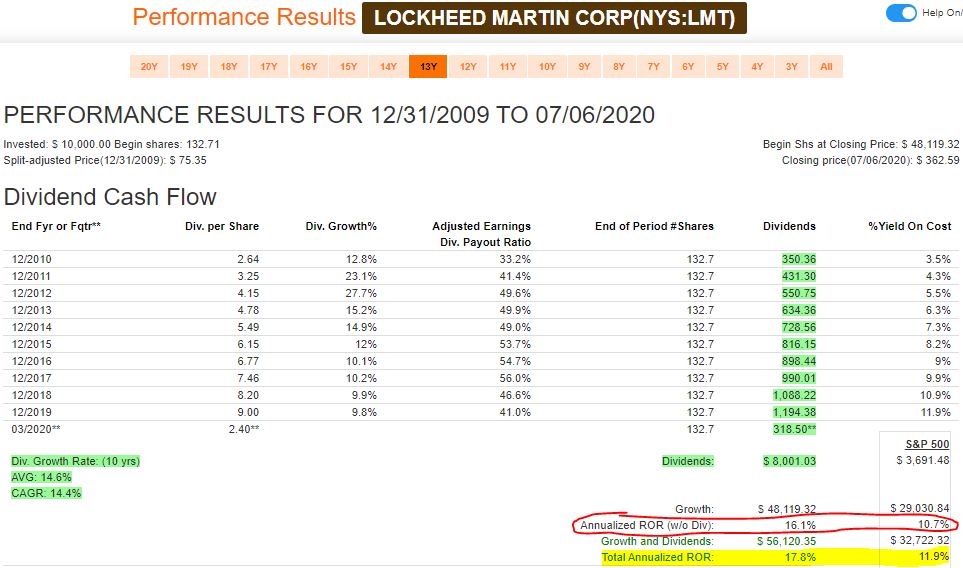 The red-circled area shows a healthy “victory” for LMT over the S&P 500 Index before dividends are factored in. Add in the dividends, and the margin becomes even greater.

And Speaking Of Dividends

The Income Builder Portfolio now has 9.0631 shares of Lockheed Martin; our position will generate $21.75 on Sept. 25, when the company pays its $2.40/share quarterly dividend.

Because our Business Plan mandates reinvestment of dividends, that will bring an additional .06 of a share of LMT into the portfolio. 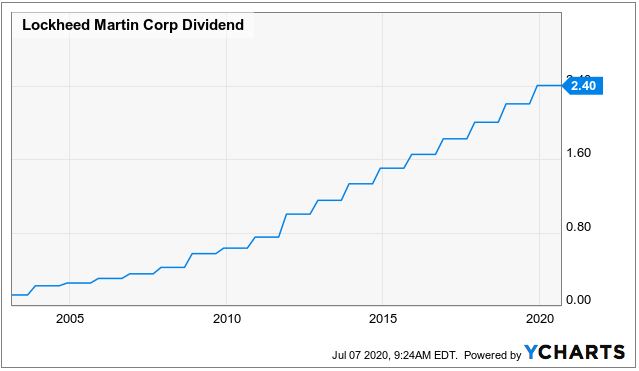 As you can see from the image above, LMT has a beautiful “Stairway to Heaven” dividend history, and the company figures to give shareholders another generous increase for its December payment.

So while our Lockheed position already is projected to generate $87 in annual income — making it one of the top 10 producers among the IBP’s 33 holdings — that almost certainly will jump substantially by year’s end.

And LMT’s free cash flow easily covers the dividend, which is important for those counting on the income.

Professional market-watchers generally are bullish on Lockheed Martin; 13 of the 21 analysts surveyed by Reuters have LMT rated either “Buy” or “Outperform.”

With every metric it monitors, Ford Equity Research gives LMT nothing but green lights.

CFRA’s analyst sees 40% price appreciation ahead in the next year.

The following analysis from Value Line reveals all kinds of bullish signs for Lockheed Martin.

The Relative P/E ratio being lower than 1 (red circle) indicates undervaluation; the 3-5 year range (purple) has a top end over $500; and the midpoint of the 18-month target range (yellow) reflects a 30% gain. Value Line also gives LMT its highest scores for Safety, Timeliness and Financial Strength.

Sounding much like the Morningstar and CFRA analysts I quoted earlier in the article, Value Line’s Ian Gendler talked about the reliability of Lockheed Martin’s business in assessing its current “buyability”:

Although defense spending by the United States and many of its allies may not increase materially over the next several years, we do not see this as much a problem for Lockheed. Several of its platfoms, in our view, are vital for the U.S. military and should remain fully funded. For instance, the Pentagon still plans to have 2,456 F-35 aircraft in its arsenal and this platform will fuel Lockheed’s financial results for many years to come. … The issue is now trading 18% below its 52-week high. That, coupled with its defensive attributes, including a top rank for Safety, and the stock would make a fine core holding, especially for conservative accounts.

Morningstar has assigned Lockheed Martin a fair value of $429, and one can see from the table below that current valuation metrics are attractive across the board when compared to LMT’s 5-year average. (I highlighted the forward P/E and PEG ratios.) 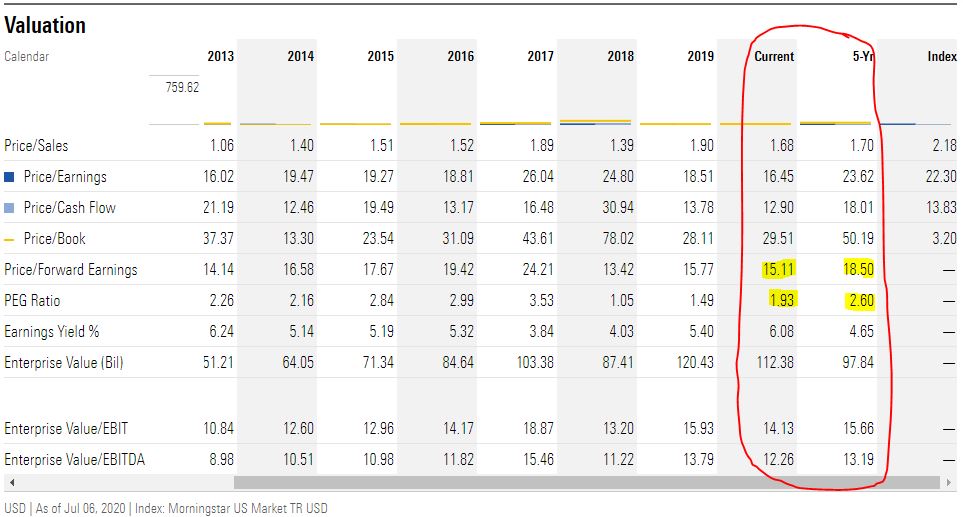 FAST Graphs shows Lockheed Martin to be fairly valued compared to its norm of the last decade (red-circled areas of illustration below).

On the main part of the graph, I used purple circles to indicate that every time LMT’s P/E ratio has dipped below 16, it has been a good time to buy shares of the company’s stock. 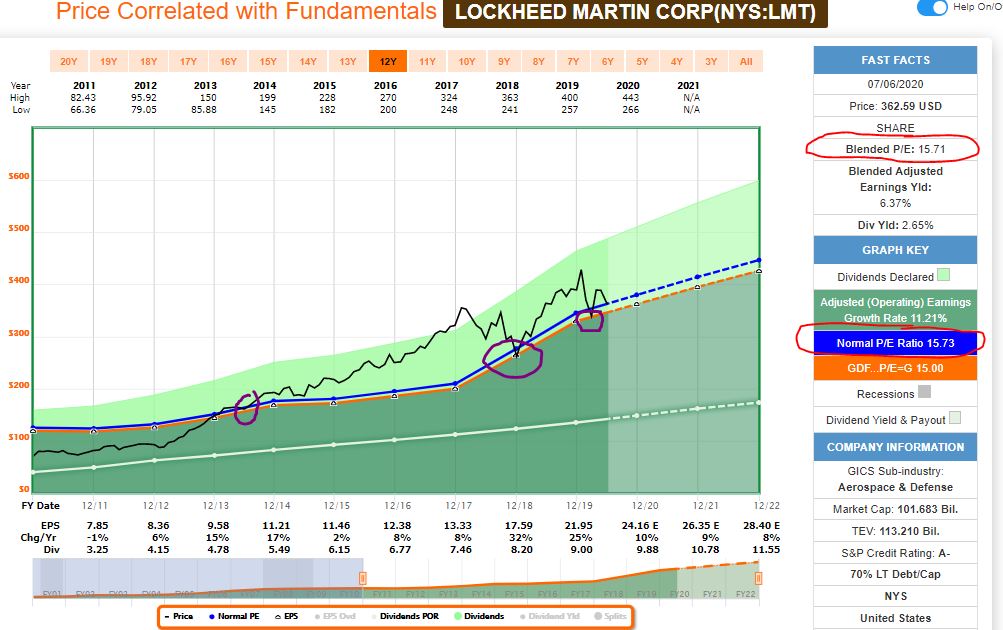 There are few certainties in investing. Even a business as outstanding as Lockheed Martin’s can have down stretches, usually due to political in-fighting.

Nevertheless, this is an industry whose best products are always in demand.

It also has significant barriers to entry. You don’t hear entrepreneurs say: “You know, I think I’ll start building bazillion-dollar fighter jets and missile systems so I can go up against Lockheed Martin and other established companies that have been doing business with the government for decades.”

In other words, LMT has one of the widest moats out there.

As was the case the first two times we bought Lockheed Martin for the Income Builder Portfolio, I feel good about investing in such a proven, money-making, dividend-growing company.