AT&T (T) is no longer the Ma Bell of our parents’ or grandparents’ generations. That company was broken up for anti-trust reasons in the 1980’s.

Since then, some of the geographic pieces of Ma Bell have been reassembled; wireless telephony has come to dominate landlines; phone companies have come to provide Internet access; and AT&T has become not only a content deliverer but also a content producer.

One thing about AT&T has remained constant through the decades: It delivers dividends to its owners. 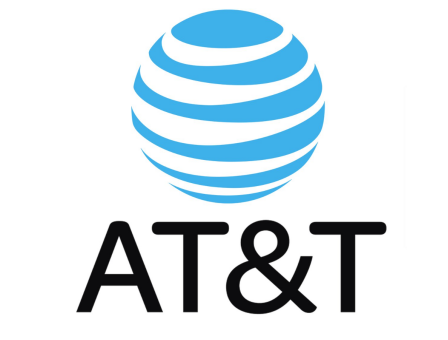 AT&T gets a lot of negative press about the quality of its management team, the unknowns that it faces as it enters the world of content creation and streaming, its high levels of debt, and so on. But:

AT&T’s BBB credit rating is in the “investment-grade” range as defined by S&P. That is important given AT&T’s high debt. AT&T’s business is capital-intensive anyway, but it really ran up the debt making acquisitions to enter the content-provider business. It is a corporate priority to bring its debt levels down, which it has been doing over the last year or two.

Overall, AT&T gets 21 out of a possible 25 points on its Quality Snapshot. That makes it a stock to seriously consider.

The company has a 36-year streak of annual dividend increases, which makes it a Dividend Champion.

The company increased its dividend payout by 2.0% in February, 2020.

As shown here, AT&T’s long-term record of dividend increases, while slow, has been relentless. 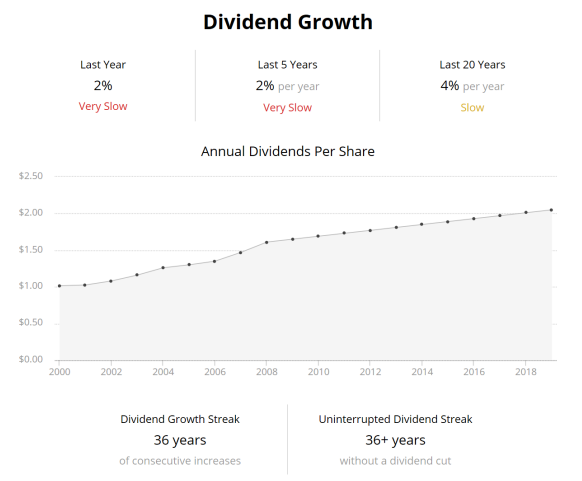 Overall, I would describe AT&T as a high-yield, slow-growth stock.

AT&T in the Valuation Zone

FASTGraphs generally uses the historical average P/E ratio of the whole stock market to represent a fair valuation. That ratio is 15, and it is used to draw the orange fair-price reference line on the following graph.

The black line is AT&T’s price. You can see that AT&T’s price got hammered in the early part of this year, and it has not come close to fully recovering yet. 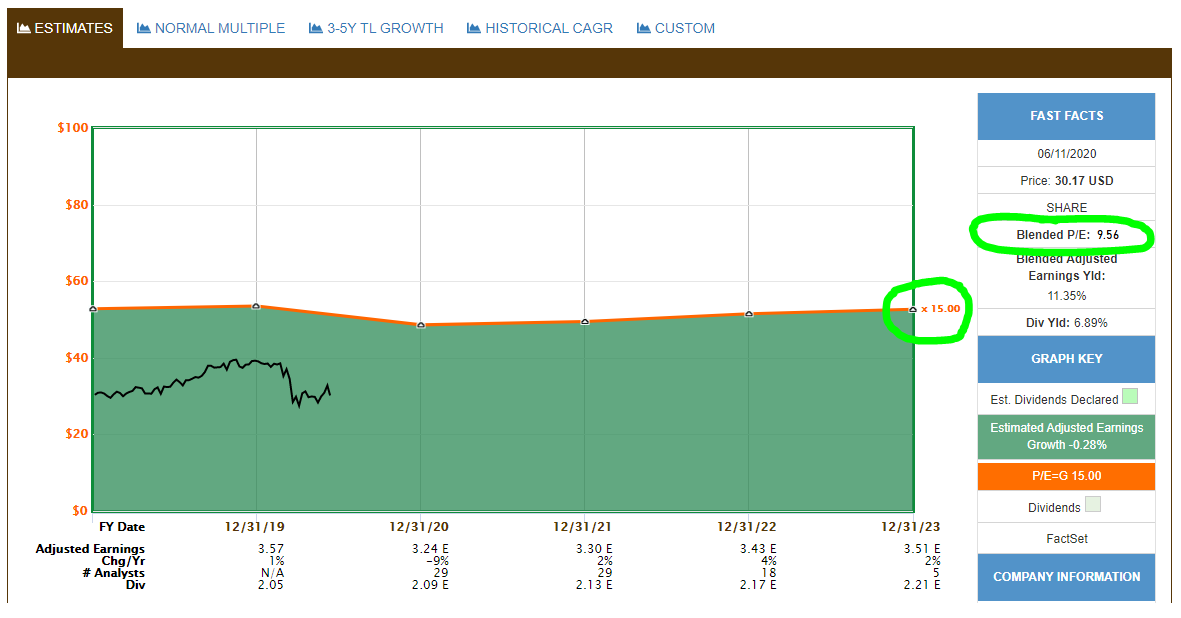 According to this model, AT&T is quite undervalued.

That valuation ratio suggests that AT&T is 36% undervalued. We use that ratio to calculate a fair price.

FASTGraphs offers another fair-value reference line. This one is based on the stock’s own long-term valuation rather than the market as a whole. Thus, this model “normalizes” the valuation to the company’s own historical record.

In the following graph, AT&T’s 5-year average P/E ratio (circled) is used to draw the blue fair-value reference line. The company’s price is again in black. 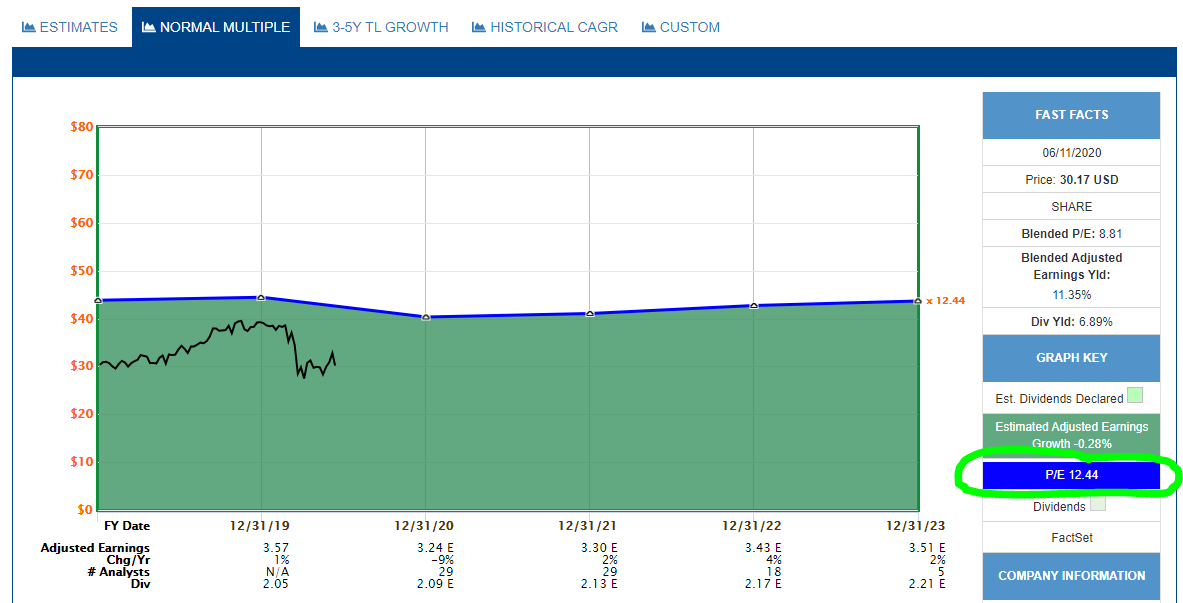 This model presents AT&T as less undervalued, because the stock’s 5-year average valuation (12.4) is lower than the reference used in the first model (15).

Applying the formulas for valuation ratio and fair price, we get:

Morningstar’s estimates are less extreme than the first two models, but they still have AT&T as undervalued. Their valuation ratio is 0.89, which leads to a fair price estimate of $37 per share.

If a stock is yielding more than its historical average, that suggests that it is a better value than usual, because you are paying less for the stock’s dividends.

Another way to look at it is that, with a well-valued stock, you can buy more shares with your money. Because dividends are paid per share, you will get more dividends for your capital investment.

The relative-yield model again suggests that AT&T is undervalued. 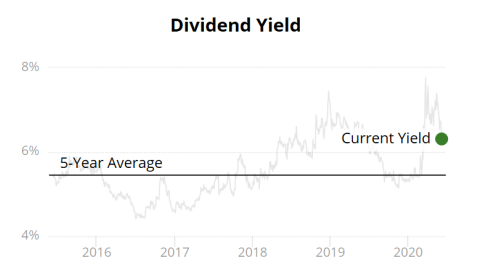 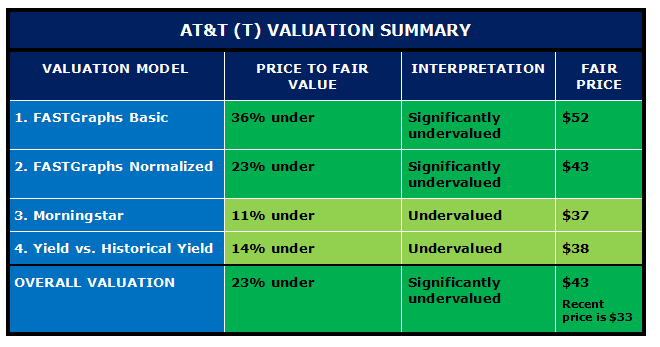 The spread between the highest and lowest models illustrates why I use several models. Each model is logical, but at the same time, all are speculative to some degree, and it is inevitable that they come to different conclusions.

In AT&T’s case, all four models agree that the company is undervalued. The average of the four models suggests a fair price of $43, compared to its recent price of $33.

AT&T has an investment-grade Quality Snapshot and a dividend that has been raised for 36 straight years. Its dividend is rated as safe by Simply Safe Dividends, and the stock appears to be quite discounted.

Considering all of those factors, I see AT&T as an attractive dividend growth opportunity, especially selling at the discount that is now available. I own AT&T in my Dividend Growth Portfolio, and my wife and I own it in our personal accounts.

This is not a recommendation to buy AT&T. As always, perform your own due diligence. Check the company’s complete dividend record, business model, financial situation, and prospects for the future. Also consider your tolerance for risk and how well the company fits (or does not fit) your long-term investing goals.