This month’s Dividend Growth Stock of the Month is General Dynamics (GD).

GD is a global aerospace and defense giant. It was incorporated in 1952, although it traces its origins back to 1899. GD employs more than 100,000 people.

Price drops since 2018 have raised GD’s profile for dividend investors. They have caused GD’s yield to rise by 50%, bringing it up above what some investors consider their minimum requirement. 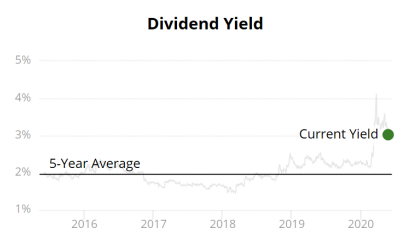 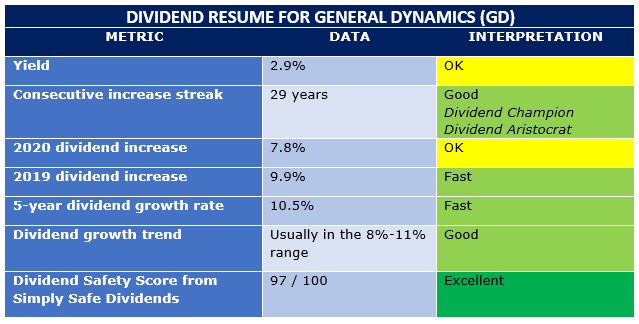 That is a very good dividend record.

General Dynamics’ yield falls just below 3%, which causes me to color it yellow instead of green. The only other non-green category is this year’s dividend increase, which was “only” 7.8%.

I would classify GD as a mid-yield, fast-growth company. As stated earlier, its yield is up at the moment, because of price drops that we will look at later.

The highlight of GD’s dividend record is the very safe score from Simply Safe Dividends, based on their analysis of factors that impact dividend sustainability.

They see no factors to suggest that GD will cut its dividend in the near future.

General Dynamics is a global aerospace and defense company. It has a broad portfolio of products and services in business aviation; combat vehicles, weapons systems and munitions; IT; and ship building and repair.

Building itself through acquisitions and organically, into the 1990s GD provided tanks, rockets, missiles, submarines, warships, fighters, and electronics to all of the military services.

Then in the early 1990s, GD sold most of its portfolio, hanging on to just its military-vehicle and submarine businesses. Then it began expanding again. It acquired Gulfstream Aerospace, combat-vehicle businesses, information technology companies, and additional shipyards.

Those form the basis of today’s General Dynamics. The company is organized into five segments, the last four of which are defense-related.

As a designated national critical infrastructure company, during the pandemic lockdown period, General Dynamics’ U.S. facilities are required to be open and are fully operating.

That said, some Gulfstream deliveries have been delayed. At its Q1 earnings presentation, GD lowered earnings guidance for 2020 by about 10%, all of which it attributed to the Aerospace unit. The guidance for all other business units was unchanged from pre-Covid estimates.

GD has unusual vision into its long-term prospects. US defense spending generally is not correlated with national economic growth or recessions, budget deficits, debt, or the political parties in power. In 2019, 66% of GD’s revenue was from the US government, with the remainder from US commercial customers (16%), non-US commercial customers (9%), and non-US government customers (9%). GD’s primary customer is the US Department of Defense.

Overall, GD has an order backlog of more than $85 billion, which is more than two years’ worth of recent annual revenue, giving it a good basis for forecasting when pandemic restrictions ease.

Morningstar awards GD a Wide moat rating, based primarily on the military portions of its business. Factors include:

As  just seen in the table above, Value Line gives General Dynamics its highest financial grade, A++. In this section, we’ll do our own analysis.

Except for the 2012 outlier, GD’s ROE has been in the 20s over the past decade. The last five full years have been 25% or above. This is an excellent ROE record.

Debt-to-Capital (D/C) ratio measures how much a company depends on borrowed money. Companies finance their operations through a mixture of debt, equity (shares issued to the open market), and their own cash flows.

A typical D/C ratio for a large, healthy company is 50%. D/C is a measure of financial risk. All else equal, stocks with high D/C ratios are riskier than those with low D/C ratios.

General Dynamics’ debt ran consistently in the 25% range until two years ago, when it jumped to 50% in conjunction with a major acquisition. While that is not an alarming figure, it took GD from having an outstanding debt record to an ordinary one.

As noted earlier, GD has a good investment-grade credit rating.

GD’s profitability has run steadily around the average for large companies for the past decade.

Again excepting for 2012 as an outlier, General Dynamics’ earnings record is outstanding. Earnings have been positive in nine of the last 10 years, and they have risen year-over-year in seven of those years. The overall trend of the bars is upward.

Free Cash Flow (FCF) is the money left over after a company pays its operating expenses and capital expenditures. Whereas EPS is subject to GAAP accounting rules, cash flow is a more direct measure of money flowing through the company. It is the cash that a company has available for dividends, stock buybacks, and debt repayment.

While General Dynamics’ cash flow has been variable from year to year, its overall record is very strong, with positive cash flow every year for the past decade.

I like declining share counts, because the annual dividend pool is spread across fewer shares each year. That makes it easier for a company to maintain and increase its dividend. By buying back its own shares, the company is investing in itself, expanding each remaining share into a larger piece of the pie, and improving all per-share statistics.

A by-product of declining share counts is that the same pool of dividend dollars will support per-share dividend increases year after year. 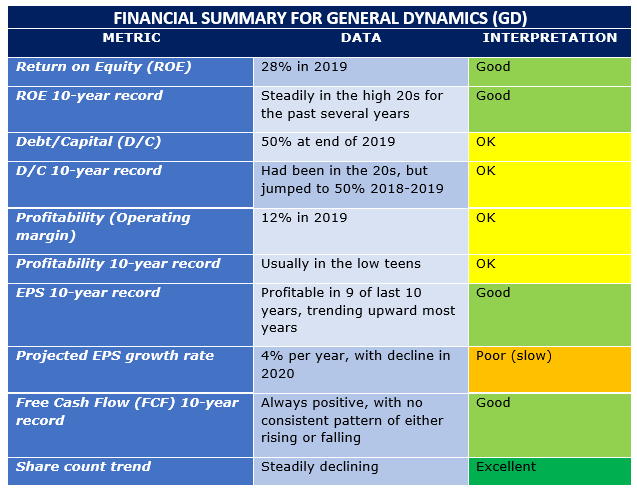 Frankly, General Dynamics’ financial picture, while fine, is not as strong as I anticipated. I don’t think it merits the A++ level awarded by Value Line.

I would give GD a B or B- for its financials on a conventional A-F scale.

The quality and business strength of a company is one thing. The valuation of its stock is another. We want to buy stocks that are undervalued whenever possible.

As often happens, we find good valuations (and better yields) among stocks whose market price has stalled out.

That is exactly the situation that brings General Dynamics to my radar screen. GD’s price has been in a general decline since 2018, which has pushed its yield up to levels rarely seen for this military-industrial powerhouse.

General Dynamics can be purchased today at the same price as in late 2016. Because it has raised its dividend every year, that means that you can buy much more GD income now than you could four years ago for the same outlay of capital. 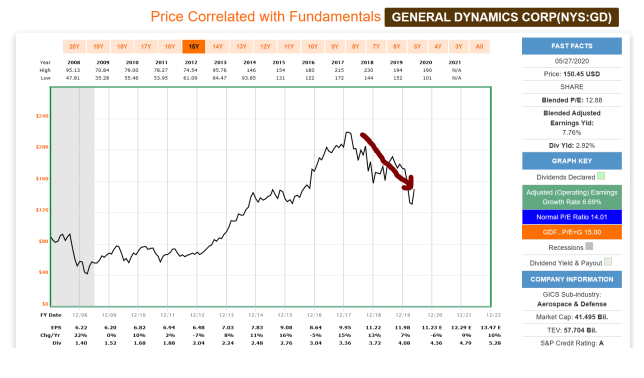 With that background, let’s check General Dynamics’ current valuation. I use four valuation models, then average them out.

The basic model usually uses a price-to-earnings (P/E) ratio of 15, which is the historical long-term P/E of the stock market, to create a fair-value reference line.  That is the reference rate used for GD.

In the following chart, the fair-value reference line is orange, and the black line is GD’s actual price. I circled both the reference P/E ratio and GD’s current P/E ratio. 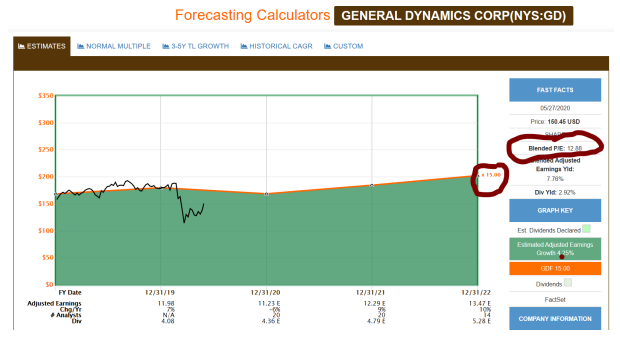 Since the black price line is beneath the orange reference line, GD is undervalued according to this model.

To calculate the degree of undervaluation, we make a ratio from the P/Es.

That suggests that GD is undervalued by 14%.

Valuation is an estimate or assessment, not a physical trait like length or width. We are making a forecast based on both data and judgement. That’s why I use several models.

Model 2: FASTGraphs Normalized. In the second valuation model, we compare GD’s current P/E to its own long-term average P/E. 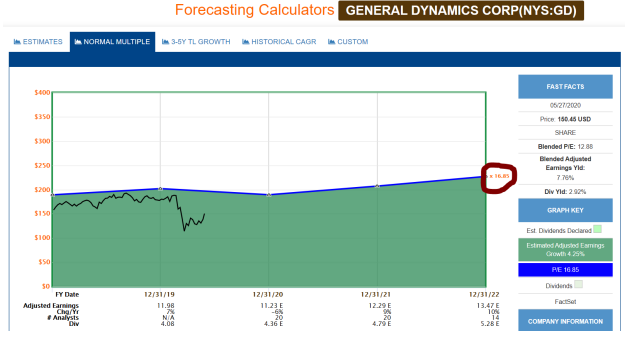 The reference line is now blue, and it is drawn at GD’s 5-year average P/E ratio of 16.9. This makes GD seem more undervalued than the first step.

Using the same formulas as in the first step, we get:

Step 3: Morningstar Star Rating. Morningstar takes a different approach to valuation. They ignore P/E ratios in favor of a discounted cash flow (DCF) model for valuation. The DCF model is based on the idea that a company is worth all of its future cash flows, discounted back to the present to reflect the time value of money.

Obviously, no one actually knows a company’s future cash flows. Estimates must be used. My experience with Morningstar is that they have a thoughtful, comprehensive, and conservative process for determining the inputs that they use in their DCF formulas.

Morningstar rates General Dynamics as undervalued by 23%, and they calculate a fair price of $187. 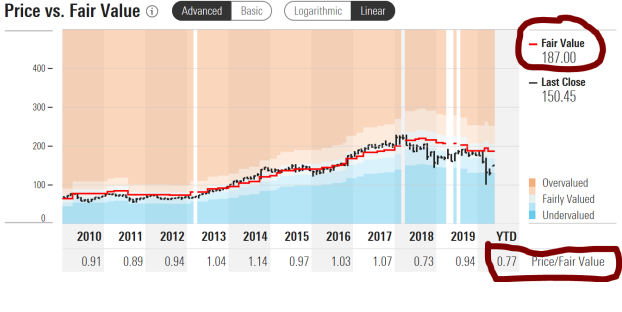 Step 4: Current Yield vs. Historical Yield. My last model compares the stock’s current yield to its historical yield. This relative-yield method of estimating fair value is based on the idea that if a stock’s yield is higher than usual, it may indicate that its price is discounted. 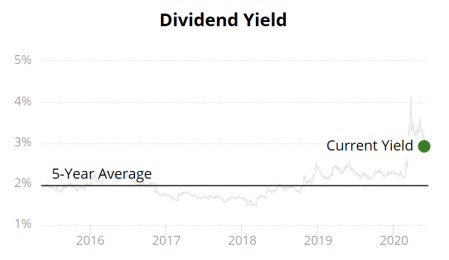 When I use this model, I put a “floor” under the valuation ratio at 0.8, because I think this is the most indirect method of the four models to gauge valuation. 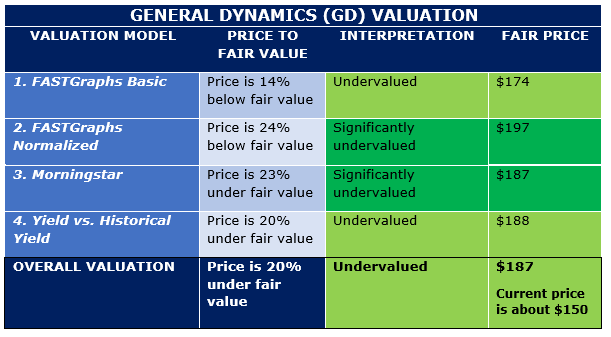 General Dynamics registers as discounted under all four models. The average of the four models suggests a 20% discount and fair price of $187 for GD.

General Dynamics’ 5-year beta is 0.94, which means its volatility has been, on average, about the same as the market’s. This is a neutral factor.

In their most recent report on BMY, CFRA gathered the recommendations of 20 analysts covering the stock. Their average recommendation is 4.2 on a 5-point scale, where 4 = buy. This is a slight positive factor.

In my opinion, at its current pricing, General Dynamics is an attractive dividend-growth opportunity.

I recently opened a position in GD in my Dividend Growth Portfolio, as did Mike Nadel in DTA’s Income Builder Portfolio. GD is also a holding in Jason Fieber’s FIRE Fund.

Nothing in this article is intended to be investment advice. This is not a recommendation to buy, hold, or sell General Dynamics. Always perform your own due diligence. Check the company’s complete dividend record, business model, financial situation, and prospects for the future. Also consider how well it fits (or does not fit) your long-term investing goals.