I concluded that even though it looked quite overvalued by most metrics, “there is every reason to believe the company will continue to thrive.”

Again I was somewhat concerned about valuation; and again I felt justified in paying nearly 29 times 2019 earnings “for a dominant company that is performing superbly.”

To say I’m pleased with how those purchases worked out would be one of the understatements of the year: Microsoft has crushed the overall market.

And now I’ve dipped back into the Microsoft well one more time, with the stock trading at about 32 times expected 2020 earnings.

On Thursday, May 28, I executed a purchase order on Daily Trade Alert’s behalf for 5 shares at $181.50 apiece. 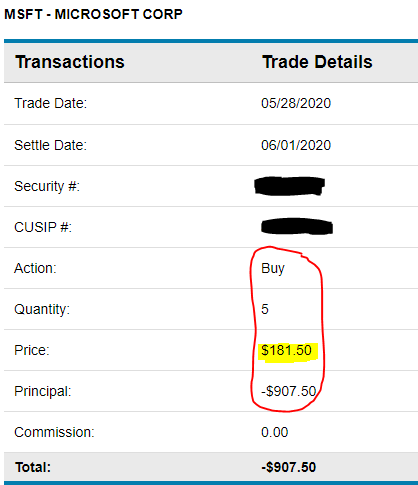 DTA allocates $1,000 for each of our twice-monthly buys, but I kept this one closer to $900 (rather than pushing $1,100) because Microsoft now is our third-largest position.

And, of course, it’s not cheap.

More on valuation in a bit; first, a few facts to expound on the thesis I presented in my previous article.

Technically Speaking, the IBP is Growing

During 2018, my first year managing the portfolio, I wanted to build the foundation of our income stream. So the Information Technology sector was underrepresented.

With this MSFT buy, it has become the largest sector in the IBP by value.

I felt it was important to add a measure of growth to an otherwise conservative, income-centric portfolio.

Value Line regularly publishes a list of 100 “Highest Growth Stocks,” which must meet several criteria to be included.

Microsoft is one of only seven companies on the list to receive Value Line’s top “Safety” rating of 1. The IBP also owns three others: Apple, Mastercard and UnitedHealth Group (UNH).

Here is the part of the list that includes MSFT, and explains the criteria:

I’m not stunned to see Microsoft perform admirably for the IBP given how well it has done in my personal portfolio (where it has grown to become my second-largest position), and also in another public portfolio I manage called the Dividend Growth 50.

The IBP now has 18.2594 shares of Microsoft, and the position is expected to produce about $37 in annual income.

That ranks in the bottom third of our 31-company portfolio, not surprising given the company’s meager 1.1% yield.

Although the yield is low, the reliability of the dividend is high thanks to the oodles of free cash flow Microsoft kicks out.

The 5 shares we just acquired will not generate income on the June 11 pay date because this quarter’s ex-dividend date already has passed. So the IBP will receive $6.76 — 51 cents for each of 13.2594 shares.

That will be reinvested right back into MSFT stock, as mandated by the Business Plan, to buy approximately .037 of a share more.

Then, come September, the entire 18.3-share position will generate about $9.33 in income, which also will be reinvested.

And around that time, Microsoft probably will announce another dividend raise in the 8% to 11% range. Sweet!

For a big-time growth stock, MSFT certainly fits our portfolio’s mission — and its name.

Professional market-watchers don’t just like Microsoft, they love it, as illustrated by the following analyst compilation from Fidelity. 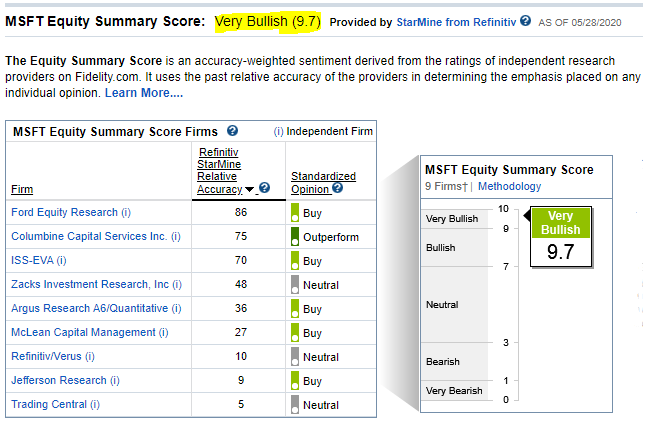 In Thomson Reuters’ survey of 34 analysts, 31 of them call MSFT either a Strong Buy or Buy.

Analysts from Credit Suisse, CFRA and Argus expect a solid showing from Microsoft over the next 12 months, with target prices between $195 and $200. 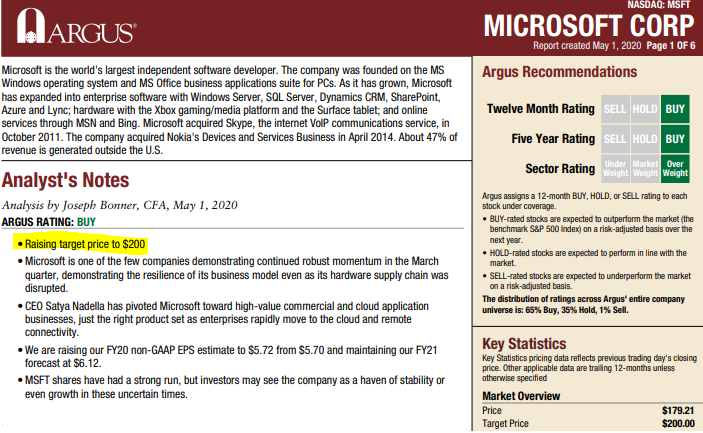 Value Line also gives Microsoft the top score of 1 for “Timeliness,” meaning MSFT is expected to show stronger relative price performace than the vast majority of the 1,700 stocks in VL’s analytical universe.

The Hare uses a “growth at a reasonable price” strategy, looking for companies with above-average earnings-per-share growth whose stocks are trading at reasonable multiples of long-term earnings potential.

As is evident from the following clip, Morningstar thinks very highly of Microsoft, which has a wide moat, exemplary management and a fair value of $196/share. 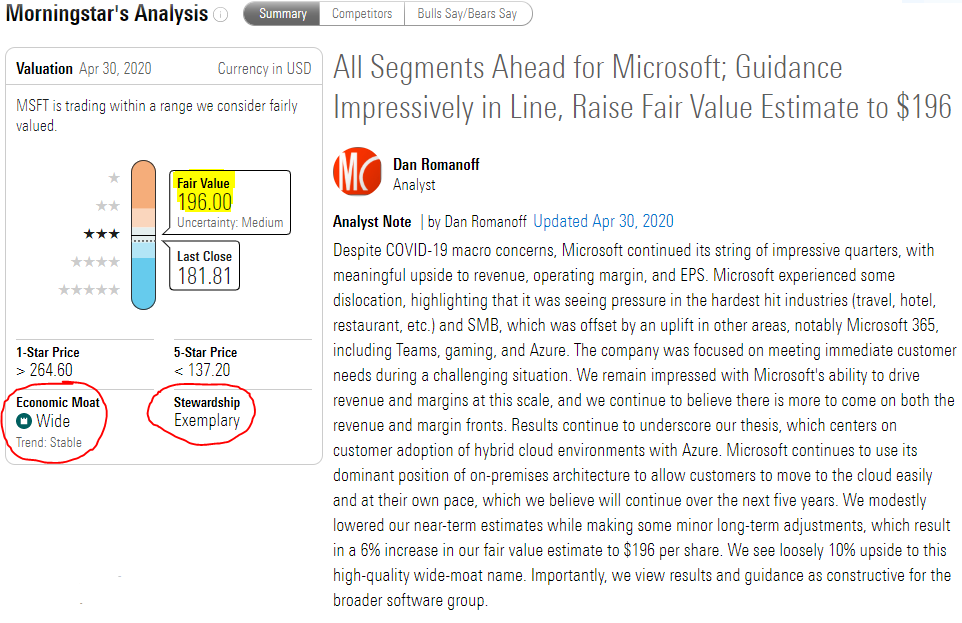 FAST Graphs, however, shows Microsoft to be quite expensive. That’s why the end of the black price line sits so far above the blue normal-valuation line. 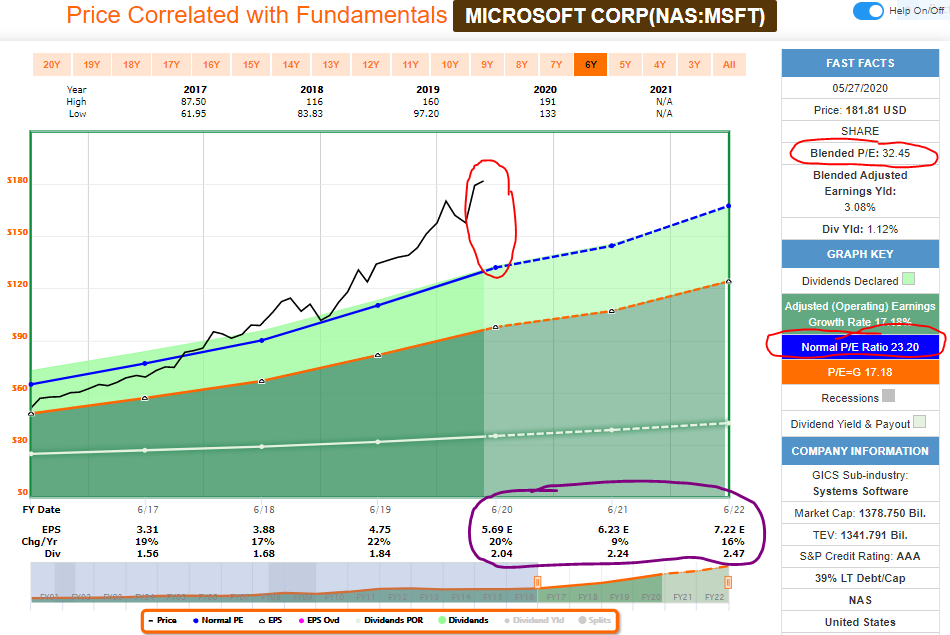 The purple-circled data on the lower right part of the image indicates Microsoft’s estimated earnings growth through 2022.

As has been the case every time I’ve selected Microsoft for the Income Builder Portfolio, it is no bargain.

Having said that, numerous analysts believe it is a great stock to own now. And given its AAA credit rating and pristine balance sheet, MSFT obviously is a well-run business.

I’ll be perfectly happy if Microsoft continues to perform as well as it has since we first bought it.

I mean, I could ask for even more, but I don’t want to be greedy!