It feels weird, even a little callous, to talk about the COVID-19 pandemic actually creating wealth for those who invested in certain stocks.

After all, hundreds of thousands of people have died worldwide, including more than 100,000 in the United States.

Social distancing, stay-at-home orders and other mitigation efforts have helped keep the death toll from surging even higher but also have strangled the economy.

Companies big and small have gone out of business, and the U.S. unemployment rate has soared to its highest level since the Great Depression.

But yes, even with all of those losses, there have been some corporate winners. 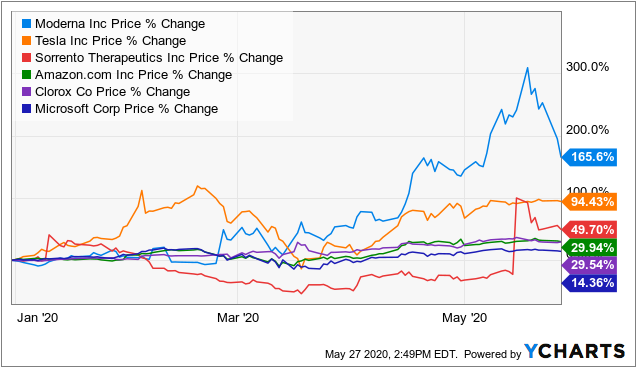 For example, drugmakers Moderna (MRNA) and Sorrento (SRNE) are working on promising treatments for those afflicted with the coronavirus.

The pandemic hasn’t prevented cutting-edge Tesla (TSLA) from being an aspirational automotive brand.

Amazon (AMZN) has served as an outlet for shoppers who couldn’t (or didn’t want to) leave their homes, and Clorox (CLX) has provided the cleaning products we all desperately need.

And then there’s Microsoft (MSFT), whose array of products … well … let’s just read what CEO Satya Nadella had to say on April 29 during the company’s third-quarter earnings call:

From remote teamwork and learning, to sales and customer service, to critical cloud infrastructure and security – we are working alongside customers every day to help them stay open for business in a world of remote everything.

There is both immediate surge demand, and systemic, structural changes across all of our solution areas that will define the way we live and work going forward.

Our diverse portfolio, durable business models, and differentiated technology stack across the cloud, and position us well for what’s ahead.

As Nadella spoke about the spectacular performances of the Teams group-meeting platform, Microsoft 365 software subscription service and Azure cloud-computing network during the pandemic, it became evident that Microsoft is built to excel in all conditions.

That wasn’t the case even a few short years ago; it was Nadella who became CEO in 2014 and led the transition from an “old-tech” company that pitched devices and Windows software to an exciting, innovative operation based on cloud and mobile services.

The success of that transformation led me to choose Microsoft for DTA’s Income Builder Portfolio nearly two years ago, and to add a “half-stake” in 2019.

And after the market opens today (Thursday, May 28), I plan to execute a purchase order for another $1,000 or so worth of MSFT stock.

I already have discussed MSFT at length on several occasions, including links I provided earlier in this article, as well as HERE and HERE.

Obviously, I think it is a well-run company with a wonderful business model — points driven home by its host of “Highest” standings in what I call “quality metrics.”

While the news these last few months has been painful to read and watch due to the havoc wrought by the pandemic, Microsoft consistently has been on the receiving end of good corporate news.

Just in the last two weeks alone, there was word of record video-game sales, of major Japanese companies signing up for Azure, and of collaborations with FedEx (FDX) and UnitedHealth Group (UNH).

In April, the National Football League used the Teams app for its first-ever virtual draft of college players, one of many reasons Teams usage has nearly doubled over the last couple of months.

Nadella said Mastercard (MA), Coca-Cola (KO) and Autodesk (ADSK) have signed up not only for Microsoft 365 but for Dynamics 365 and Azure in a 5-year, multi-cloud agreement.

Microsoft passed the trillion-dollar market cap milestone last year, and lately it has been playing leapfrog with Apple (AAPL) for the unofficial title of “World’s Largest Company.”

At that size, can Mr. Softy keep growing?

In a word, yes, as shown in the following FAST Graphs illustration of earnings per share. 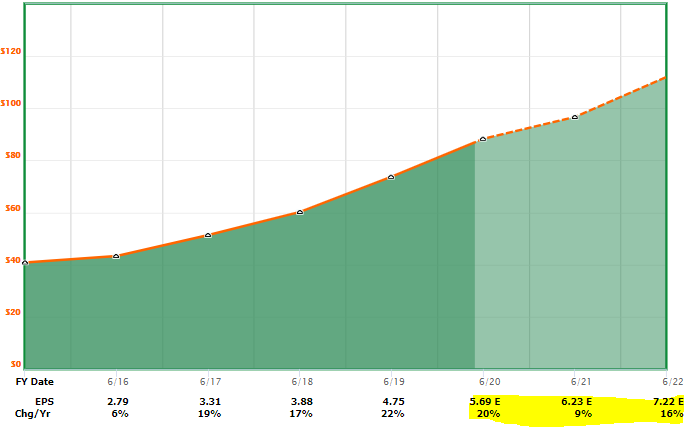 Meanwhile, finviz.com is forecasting 15.2% annual earnings growth over the next five years — better even than the 12.5% norm of the last five.

With a total return of 56.6% on our two buys, Microsoft has been one of the Income Builder Portfolio’s best performers; had we bought the S&P 500 Index instead on the exact same days, the return would have been only 7.5%.

Solid earnings and free cash flow have enabled Microsoft to raise its dividend annually since 2004. After many years of very aggressive hikes, the company more recently has given shareholders somewhat smaller increases in the 8% to 11% range. 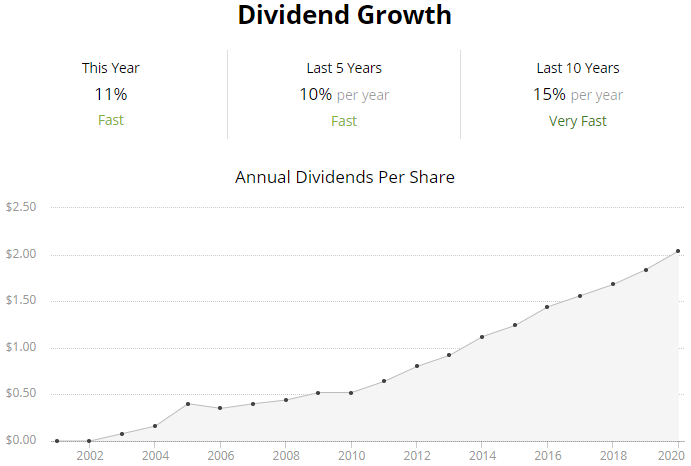 During years when its stock price was down, Microsoft had a dividend yield in excess of 3%; as the price has zoomed higher, though, its yield has shrunk to 1.1%

I now look at the MSFT dividend as more of a “nice little bonus,” especially for investors who don’t own huge positions. 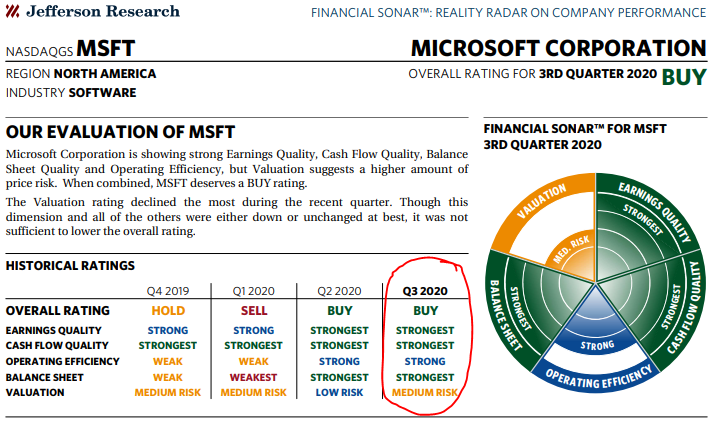 Indeed, the only cause for pause is the stock’s relatively high valuation — a subject I will explore at length in the post-buy article that is expected to be published on Friday, May 29.

Otherwise, Microsoft clearly is a company at the top of its game, performing fantastically both during the second half of the long bull run that followed the Great Recession and during the COVID-19 crisis.

As always, investors are strongly encouraged to conduct their own due diligence before buying shares in any company.