One of the most difficult things for any investor to do is sell a stock at a steep loss. 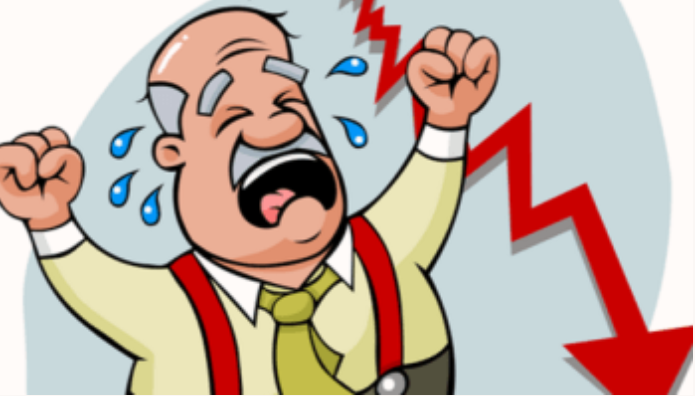 Such a sale is an admission of failure, making it almost impossible to avoid playing the “I WISH” game.

And that last “I wish” is the one that really hits home, because it leads to the “IF ONLY” game.

As the steward of DTA’s Income Builder Portfolio, I have been having those exact feelings about banking giant Wells Fargo (WFC), which had a lengthy list of troubles long before most of us had ever heard the word, “coronavirus.”

When I selected Wells Fargo back in January, I acknowledged the speculative nature of the investment right away:

Guys, I’m about to risk about a thousand of your hard-earned bucks!

Well, I wasn’t wrong about the risk. 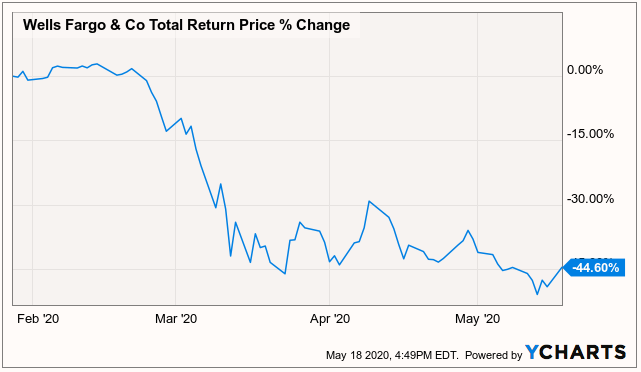 So, why not keep Wells Fargo, hoping we eventually can get back to break-even with the investment?

Psychologically, that’s the attitude many investors take, because it hurts too damn much to admit defeat.

And believe me, I’m not removing myself from the equation; I’m only human, and over the years I have held onto a few bad stocks for that very lame reason.

Investing, however, should always be a forward-looking pursuit.

The important thing is not about what already has happened with Wells Fargo. It is: “Can I do better from here on out with another stock?”

I’m pretty sure I could with numerous choices, and the one I have opted to go with is drugmaker AbbVie (ABBV).

Shortly after executing the sell order on Wells Fargo, I completed a buy order for 6 shares of the world’s largest biopharmaceutical company.

The trades ended up perfectly balancing each other, as the $553.38 we spent on ABBV is the exact amount we got for our WFC shares plus the aforementioned $10.84 WFC dividend to be paid in a couple of weeks.

Because WFC was expected to generate about $43 in annual dividends for the portfolio vs. $28 to be paid for the 6 new ABBV shares, the IBP will take a small hit to the income stream.

Wells Fargo’s dividend is far from secure, though, so this WFC-to-ABBV switcheroo could end up being advantageous from an income standpoint, too. (More on that shortly.)

First things first: I did not choose to sell Wells Fargo simply because the stock price plummeted down to an 11-year low.

Nevertheless, the downward trajectory of the price did reflect just how troubled this company is.

Wells Fargo’s litany of issues began in 2016 when it was disclosed that employees had been opening accounts under the names of millions of customers without their knowledge.

And for the next few years, it had been one thing after another.

Of course, I knew about all of that when I selected WFC for the IBP, but I still saw the company as something of a turn-around play.

As the spread of COVID-19 created a global crisis, companies with weak hands naturally were affected more severely than those that were stronger.

Banks are getting hit hard. Not only haven’t consumers been spending much money, but millions are likely to default on mortgages, car loans, credit cards, etc.

And among the major U.S. banks, none was more fragile than Wells Fargo.

As a result, you get an ugly FAST Graphs image like this one: 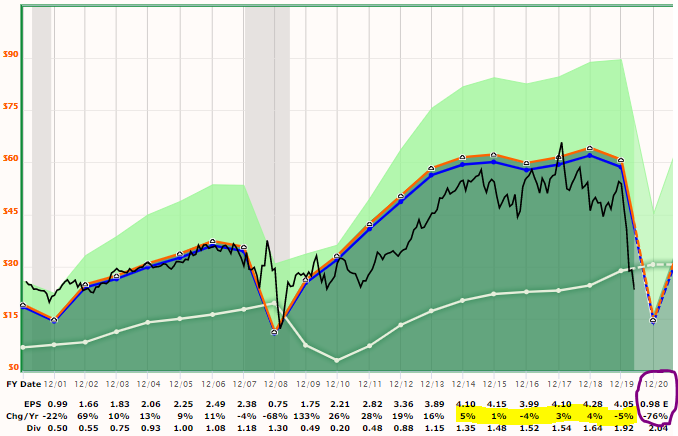 The yellow-highlighted area shows that earnings weren’t growing much (or were shrinking) for years, as it was. But earnings are falling off a cliff in 2020 (purple).

The company cut the dividend 85% during the Great Recession, and another huge reduction could be in the offing.

Simply Safe Dividends, which had assigned a “safety” score of 79 (Safe) back in January when we made the buy, had lowered its rating to Borderline Safe in March and then, last week, to Unsafe (40).

I simply think the IBP can do better, both with the dividend and total return.

Our AbbVie investment is up 19% — more than double the 8% gain of the overall market from the dates of our purchases.

And I believe the case for investing in ABBV has only gotten stronger.

The 2020 first-quarter earnings report, released May 1, was outstanding, with significant year-over-year growth in both earnings and revenue.

ABBV even maintained its full-year earnings guidance, something most companies have been reluctant to do in these uncertain times.

And all that good news came before AbbVie’s acquisition of Allergan was finalized on May 8.

With Allergan — the producer of Botox — in the fold, it makes AbbVie an even more formidable presence in its industry. It also gives ABBV another blockbuster drug to go along with its long-time star, Humira.

No wonder analysts are so high on the company.

The IBP now owns about 26.3 shares of AbbVie, and the position is expected to produce about $124 in annual income; that ranks fourth among our portfolio’s 32 components.

It also is one of our higher-yielding companies at 5.2%, and its dividend has grown by double-digit percentages every year since ABBV was spun-off from Abbott Labs (ABT) in 2013.

I sure hated locking in the Wells Fargo loss. Ugh. Talk about doing the exact opposite of that old investing mantra: Buy Low, Sell High.

Naturally, I wish I had chosen AbbVie rather than Wells Fargo in January. If only I had done so, that ABBV investment would have gained 10% rather than suffered the terrible loss WFC did.

But it really does no good to play the “I WISH” and “IF ONLY” games now.

All an investor can do is look to the future, and I’m feeling good about swapping WFC for more ABBV in the Income Builder Portfolio.

As always, investors are strongly urged to conduct their own due diligence before buying or selling any stocks.