The market reaction to the COVID-19 pandemic was a swift market crash (about a month long) after the market hits its all-time high on February 19, followed by a slower recovery (about two months).

Exaggerated volatility has been evident in both the crash and the partial recovery that has followed. Altogether, the S&P 500 index is down about 9% since the beginning of the 2020. 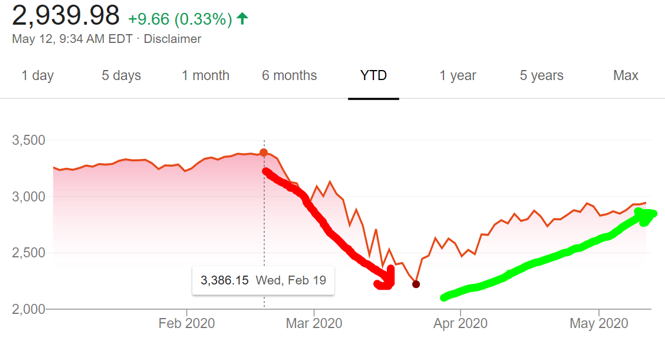 As I explained in March, I believe that in the long run, valuations matter. With that in mind, let’s look at the valuation of a particular stock in the Valuation Zone, while remembering that in market and economic conditions like these, every stock investment has a considerable speculative dimension beyond the normal.

The choice this month is Aflac, Inc. (AFL), represented by the ubiquitous duck.

“Supplemental insurance” means that the company pays cash to policyholders when they get sick or injured.

The idea is that financial support for expenses not covered by health insurance allows policyholders to focus on recovery, not financial stress.

Japan accounts for about two-thirds of Aflac’s revenues.

Aflac Life Insurance Japan is the leading provider of medical and cancer insurance in Japan, where it insures 1 in 4 households.

Disclosure: My wife and I have owned Aflac in our personal Perpetual Dividends Portfolio for several years.

I recently added Dividend Growth Investing Lesson 20: Quality Snapshots to DTA’s educational series. As explained there, I derive Quality Snapshots from the following sources, which I have come to trust and respect over the years:

Aflac’s quality score is attractive except for the no-moat rating from Morningstar.

• Three of the five factors are green “Above Average” or “Excellent” grades. Its dividend grades out as being extremely safe.
• The Value Line Financial Strength grade (A) was upgraded in late 2018.
• Morningstar’s no-moat rating was determined by algorithm, as there is no assigned analyst for the company. I include it for completeness, but there is little meaning to be attached to it.

On the Quality Snapshot scoring system, Aflac gets 18 points, which makes it an acceptable investment-grade company to consider.

Aflac’s yield is 3.2%, which is mid-range. Aflac has a 38-year streak of dividend increases., which makes it a Dividend Champion. The company increased its dividend payout by 3.7% in March, 2020. 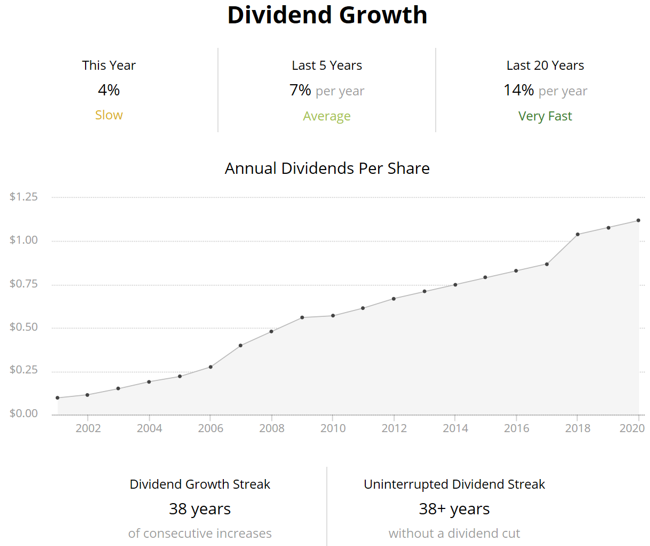 Overall, I would describe Aflac as a mid-yield, mid-growth stock.

The Duck in the Valuation Zone

FASTGraphs usually uses the historical average P/E ratio of the whole stock market to represent a fair valuation. With a slow-growth company, FASTGraphs picks a lower P/E ratio for reference. In Aflac’s case, that lower P/E is 12.3, which is used to draw the orange fair-price reference line on the following graph. The black line is Aflac’s price. 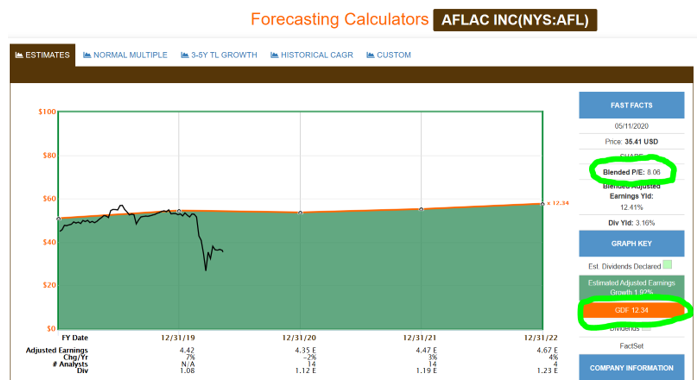 Using this model, Aflac comes across as quite undervalued.

That valuation ratio suggests that Aflac is 34% undervalued. We use that ratio to calculate a fair price.

FASTGraphs offers another fair-value reference line. This one is based on the stock’s own long-term valuation rather than the market as a whole. That is, this model “normalizes” the valuation to the company’s own historical record. 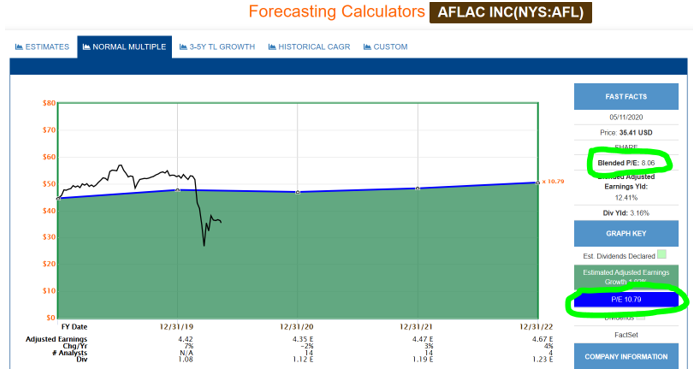 This model presents Aflac as less undervalued, because the stock’s 5-year average valuation is lower than the reference used in the first model.

The formulas for the valuation ratio and fair price are the same as above. Applying them, we get:

Morningstar also calculates Aflac’s price as far undervalued. Their valuation ratio is 0.73, which leads to a fair price estimate of $48 per share.

The “Q” superscript indicates that this was all done by algorithm (no analyst).

The final valuation method is to compare the stock’s current yield to its historical yield.

If a stock is yielding more than its historical average, that suggests that it is a better value than usual, because you are paying less for the stock’s dividends.

Another way to put this is that, with a well-valued stock, you can buy more shares with your money. Because dividends are paid per share, you will get more dividends for your money.

This relative-yield model suggests that Aflac is undervalued. 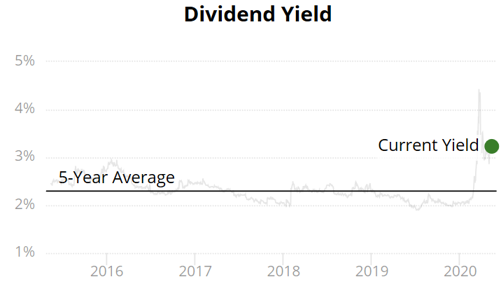 When I use this yield-comparison model, I put a floor under the valuation ratio at 0.80, because I think that this model is an indirect way to measure valuation. 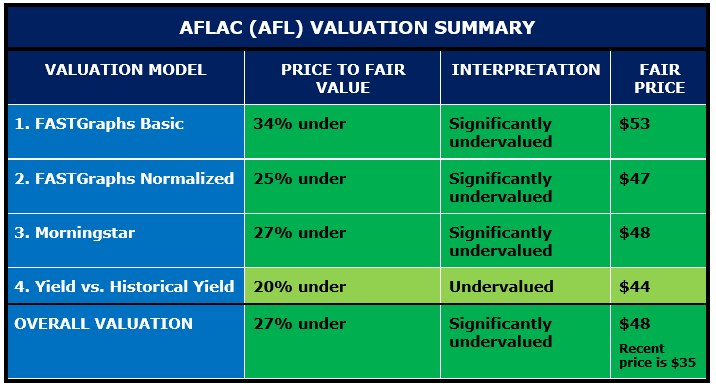 All four models agree that The Duck is undervalued. The average of the four models suggests a fair price of $48, compared to its recent price of $35.

Aflac has an investment-grade Quality Snapshot, very good dividend track record, and a dividend that has been raised for 38 straight years and is rated as extremely safe by Simply Safe Dividends. The stock appears to be very undervalued at the moment.

All things considered, I see Aflac as an attractive dividend growth opportunity, especially selling at the extreme discount that is now available.

This is not a recommendation to buy Aflac Inc. As always, perform your own due diligence. Check the company’s complete dividend record, business model, financial situation, and prospects for the future. Also consider your tolerance for risk and how well the company fits (or does not fit) your long-term investing goals.