Like many sports fans desperate for something interesting to watch during these bizarre stay-at-home times, I have been checking out “The Last Dance,” ESPN’s outstanding 10-part series about the end of the Chicago Bulls’ 1990s dynasty.

Lo and behold, at about the 40-minute mark of Episode 3, there I was … 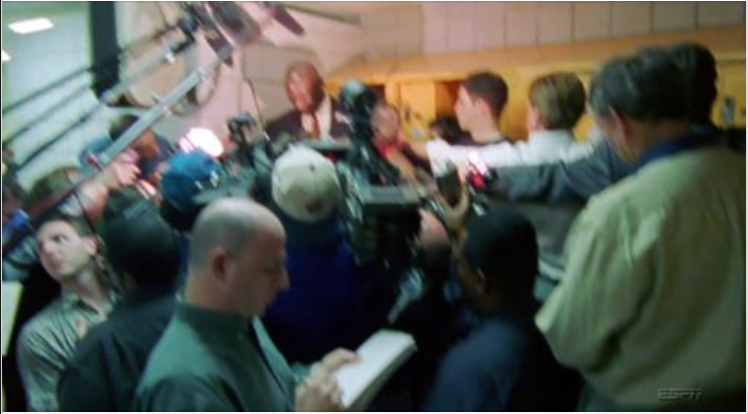 I’m the very attractive and obviously highly intelligent bald gentleman who is taking notes as I stand on the periphery of a January 1998 media scrum surrounding Michael Jordan.

Back then, I was a 30-something sports reporter for The Associated Press, the world’s largest news-gathering organization.

Warped dude that I am, the three things I immediately thought of as I watched my several seconds of “stardom”:

Aside from taking this opportunity to let y’all know a little more about my background, I’m using this introduction to segue into my latest stock selection for DTA’s Income Builder Portfolio: Philip Morris International (PM).

After the market opens today (Tuesday, May 5), I plan to execute a purchase order on Daily Trade Alert’s behalf for about $1,000 worth of the tobacco giant.

Lighting Up in a Social Distancing World

AP’s main basketball writer back in 1998, Chris Sheridan, was a heavy smoker. Whenever he had a few minutes before or after a game (or at halftime), he would say, “Let’s go to my office.”

In other words, he wanted me to step outside with him to talk about that day’s writing assignments while he chilled out with a Marlboro or two.

Fast-forward to today. With COVID-19 infecting millions and killing hundreds of thousands worldwide, socializing with fellow humans is being strongly discouraged (and even prosecuted as a crime in some countries).

Even those of us who don’t smoke hope that’s a short-term thing, of course. We all want to win the battle against this deadly global pandemic, and we don’t want social distancing to have to be the new norm.

As for the coronavirus’ impact on Philip Morris’ business, here is a page from the April 21 earnings presentation: 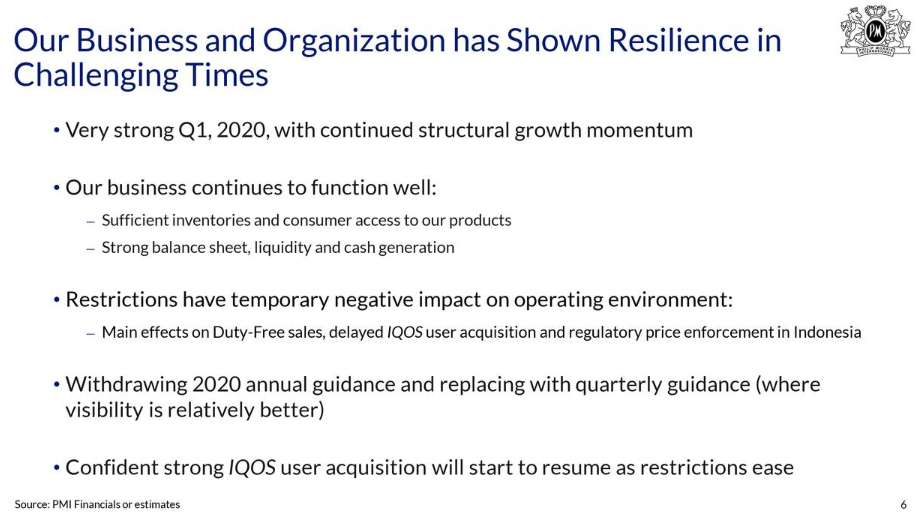 The last point on the list above illustrates how much has changed for PM since I used to join my colleague in “his office.”

For one thing, Philip Morris International was spun off in 2008, with Altria (MO) becoming the U.S. operation. (The IBP also owns Altria.)

For another, the last couple of years, PM has increasingly focused on IQOS heated-tobacco products.

Indeed, right on the very first page of its earnings reports now, PM makes it very clear where it thinks its future lies — and it’s not with cigarettes. 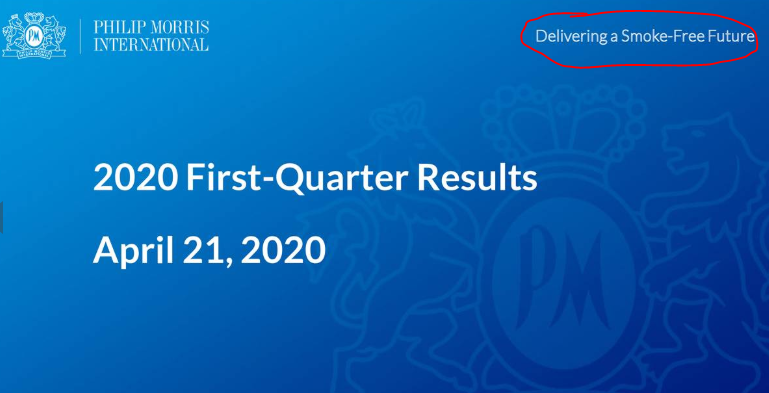 The IBP already owns a stake in Philip Morris, which we bought last September; this transition toward IQOS was discussed at length HERE, so I won’t repeat everything now.

Nevertheless, the following page from the 2020 Q1 report shows that although cigarettes still dominate PM’s business, the year-over-year growth is in the heated-tobacco units. 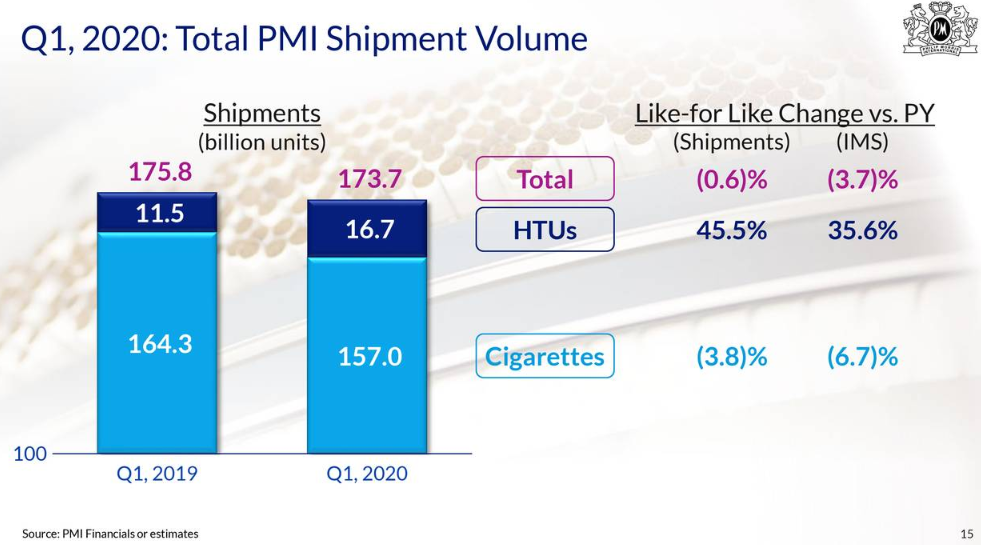 Quality Business With a Wide Moat

Though it may seem counterintuitive in a declining industry, we have conviction that our Wide Moat rating is appropriate because we believe PMI is very likely to continue generating excess returns on invested capital for the next 20 years.

Tight government regulations have made barriers to entry almost insurmountable and have kept market shares stable. Consumers are quite brand-loyal, particularly in premium price segments, to which PMI’s portfolio skews, creating another intangible asset that is no longer as prevalent as it once was in other consumer categories.

Tobacco contains nicotine, an addictive substance that suppresses the cessation rate. According to data from the Tobacco Atlas, more than 60% of all smokers intend to quit, and 42% have attempted to quit over the last 12 months. Yet in most markets, the smoking rate is in only a very modest decline, implying that the majority of smokers attempting to quit fail to do so.

At about $73/share, PM appears attractively valued. I will discuss that topic at length in my post-buy article, which is scheduled to be published on Wednesday, May 6.

Philip Morris International has averaged only 3.2% annual dividend growth over the past 5 years, making it one of the IBP’s slowest movers in that department.

But at least that tortoise-like pace is nicely offset by PM’s 6.4% yield — that’s one of the highest in our 33-stock portfolio, and it’s one reason the company is so popular with Dividend Growth Investing practitioners.

Though I miss being able to watch live sports on TV, I realize that’s a pretty minor inconvenience in the grand scheme of things.

Working on my investing has helped fill the void. I have analyzed my personal portfolio, thoroughly examining what has worked, what hasn’t, and what stocks I want to own going forward.

Philip Morris has been part of my portfolio since the spin-off from Altria; it has been a reliable income-producer, and I am confident it will do well in that role within the IBP for years to come.