The COVID-19 health crisis has resulted in a swift market crash, followed by a partial recovery, all in a little over a month. Exaggerated volatility has moved the market up and down by 5% or more on many days. 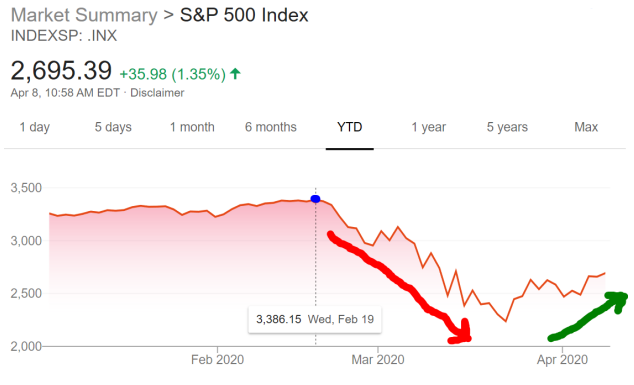 The blue dot on the graph above marks both the stock market’s all-time high AND the last day of the 11-year bull market that started in March, 2009.

The jags in the daily closing prices tell the story of extreme volatility.

Just compare the placid period to the left of the blue dot to the violent swings to the right of it.

There is no telling, frankly, what the market will do on any given day.

The only thing, in my observation, that has been consistent since February 19 is that the market overreacts to everything.

There is a great deal of speculation, greed, and fear controlling stock prices during the pandemic.

As I explained last month, I believe that in the long run, valuations matter, even when the market is experiencing extreme volatility, as it has been.

So this month, I am returning to my regular practice of presenting one stock at a time. The caveat is that macro conditions are changing so fast that every investment has a significant element of speculation. 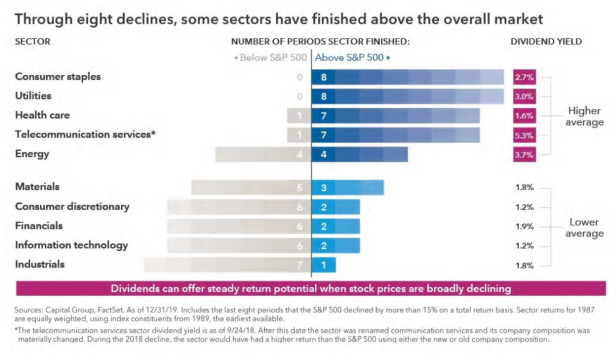 UGI Corporation (UGI) is a Pennsylvania-based holding company that distributes and markets energy products and services through its subsidiaries both in the USA and internationally. The company operates through four segments:

The top two categories (utility and midstream) account for the vast majority of UGI’s total revenue. UGI Utilities operates gas and electric utilities in Pennsylvania and Maryland. Midstream sells natural gas across several states through its own processing, pipeline, and storage facilities. AmeriGas is the largest propane distributor in the country. UGI International is the largest LPG (liquified petroleum gases) distributor in several European countries.

UGI was founded in 1882 and is headquartered in King of Prussia, Pennsylvania. 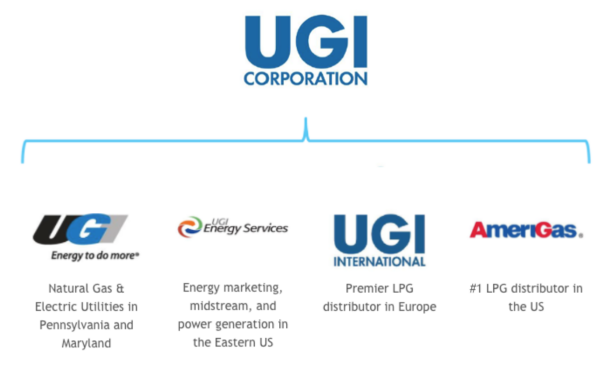 On the scoring system described in DGI Lesson 20, UGI gets 18 points on its Quality Snapshot, which makes it an acceptable investment-grade company.

UGI has been hitting most of its targets for earnings growth and dividend growth for many years. 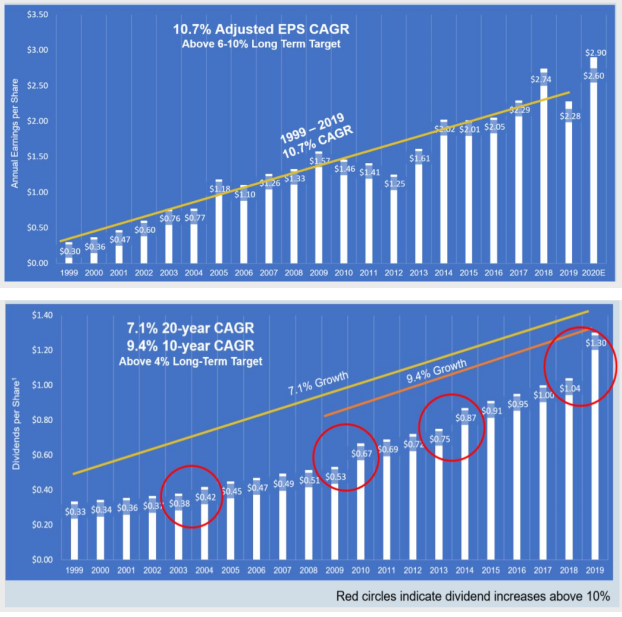 UGI’s yield is 4.6% as of the close of trading on Tuesday, April 7. Usually I wouldn’t be that specific as to time of day, but stock yields are changing constantly with the price volatility in the stock market.

UGI usually increases its dividend in October. Last year’s total increase was 25%, spread over two declarations. Its 5-year dividend growth rate is 7.3% per year. It has stated a commitment to shareholders to increase its dividend annually by about 4%.

For stocks with yields above 4%, I consider 4% per year growth to be fine. Therefore I would describe UGI as a high-yield, mid-growth stock based on its 4%+ yield and stated target of 4% annual dividend increases.

UGI is a Dividend Champion, having chalked up a 32-year streak of raising its dividend. The company increased its dividend straight through the last three recessions. Recessions are marked by the gray bands on this graph. 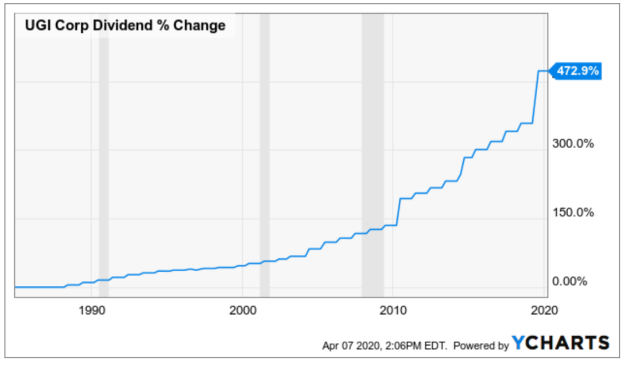 UGI in the Valuation Zone

FASTGraphs uses the historical average P/E ratio of the whole stock market (which is P/E = 15) to represent a fair valuation. That P/E = 15 value is used to draw the orange fair-price reference line on the following graph. I circled that value along with UGI’s own P/E ratio of 11.5. 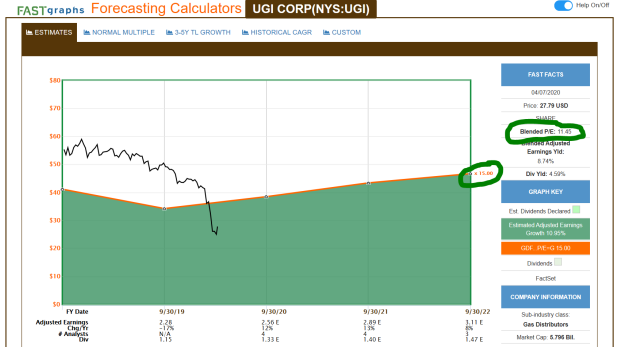 After UGI’s recent steep price drop, its P/E is well below the orange reference line.

That valuation ratio suggests that GD is 23% undervalued. We use that ratio to calculate a fair price.

FASTGraphs offers another fair-value reference line. This one is based on the stock’s own long-term valuation rather than the market as a whole. That is, this model “normalizes” the valuation to UGI’s own historical record. 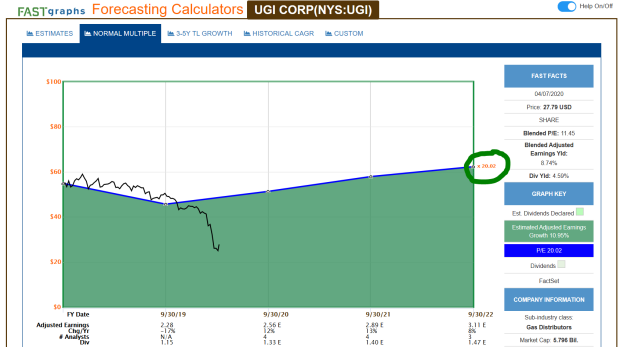 This model presents an even more extreme picture of UGI’s indervaluation, because the company’s long-term average P/E, at 20, is much higher than 15 used in the first model.

The formulas for the valuation ratio and fair price are the same as above. Applying them, we get:

Morningstar also calculates UGI’s price as far undervalued. Their valuation ratio is 0.61, which leads to a fair price estimate of $46 per share. 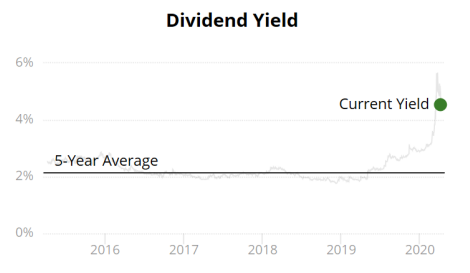 That suggests the stock is significantly undervalued.

When I use this yield-comparison model, I put a floor under the valuation ratio at 0.80, because I think that this model is an indirect way to measure valuation. 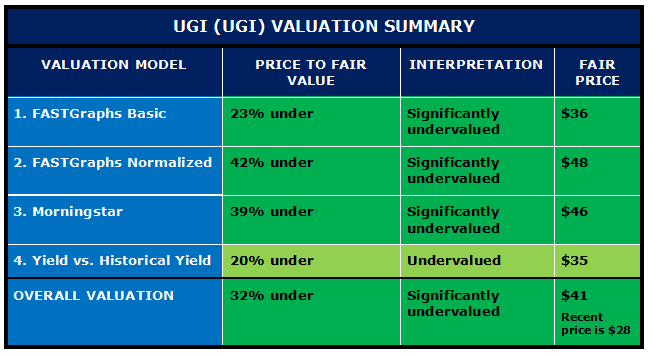 All four models agree that UGI is undervalued. The average of the four models suggests a fair price of $41, compared to its recent price of $28.

UGI has an investment-grade Quality Snapshot, a stellar dividend record, and its dividend is rated as extremely safe by Simply Safe Dividends. The stock appears to be very undervalued at the moment.

All things considered, I see UGI as an attractive dividend growth opportunity, especially selling at the extreme discount that is now available.

This is not a recommendation to buy UGI Corporation. As always, perform your own due diligence. Check the company’s complete dividend record, business model, financial situation, and prospects for the future. Also consider your tolerance for risk, plus how well the company fits (or does not fit) your long-term investing goals.