In considering the catastrophic month of March and the disastrous first quarter of 2020, the wise guy in me was tempted to say something like, “Well, that was fun” … but this is not the time to be clever or flippant.

It has been devastating just about everywhere — including the United States — and most infectious disease experts believe April could be worse still.

Even Donald Trump, who just a month ago was downplaying the situation by telling Americans that the number of infections soon would be “close to zero,” now admits the coming weeks will be “very very painful.”

What About The Stock Market?

Daily Trade Alert is an investing site, so that is where I will turn my focus … although it can’t be separated from the pandemic. 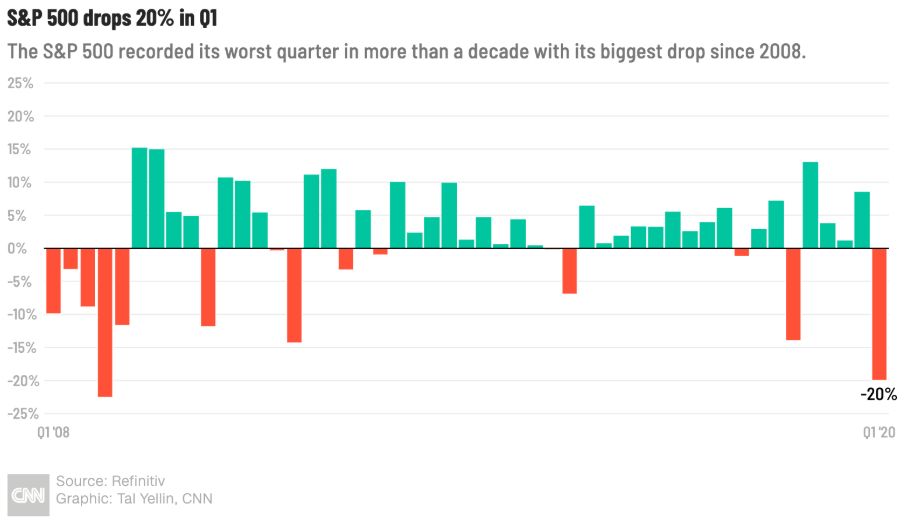 March, meanwhile, was the worst month for either index since the teeth of The Great Recession in October 2008, as the Dow lost 13.7% and the S&P dropped 12.5%.

It also has been a rough go for DTA’s Income Builder Portfolio, the real-money project I have been working on since the start of 2018.

The IBP owns 30 companies. Isolating the 23 that received no new money this year, the portfolio was down 16.9% in the first quarter.

That the portfolio handily beat both the Dow and S&P 500 during those stretches is a pretty hollow “victory.”

It is within this somber backdrop that I report our latest buy: 25 shares of Cisco Systems (CSCO).

On Tuesday, I executed a purchase offer on DTA’s behalf for $1,000 worth of the network equipment maker and software/virtual service company. 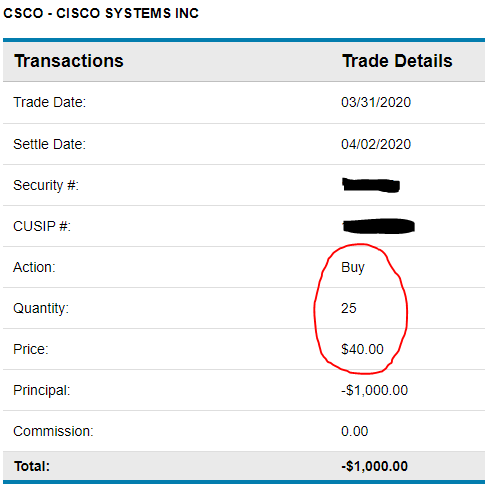 It is the second time we have bought CSCO for the IBP, the first coming back on Dec. 10.

Not surprisingly, the total return on that initial purchase is about minus-8%. Nothing to brag about, obviously — although, again, that has crushed the return of both the S&P 500 and Dow. 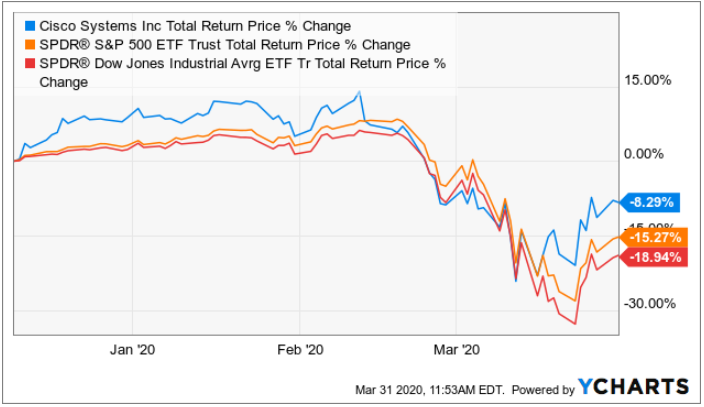 In my previous article, I discussed many reasons I chose to double-down on Cisco. Near the top of the list is the reliable, growing dividend the company pays shareholders each quarter.

CSCO yields 3.7%, rather high for a stock in the Information Technology sector, and our position is expected to generate about $70 over the next year (11th among IBP holdings).

Because we made this last purchase before the April 2 ex-dividend date, we will receive the .36/share quarterly payout for our entire 48.1643-share position.

Per the IBP Business Plan, the $17.34 we receive on April 22 will be reinvested, bringing another 4/10ths of a share into the portfolio.

Then, three months later, our approximately 48.6-share position will generate about $17.50 more in income, which again will buy a little more CSCO.

And on and on it will go, quarter after quarter, not only for Cisco but with all of our companies … showing why this endeavor was aptly named.

As indicated by the 10 analysts Fidelity uses, market-watchers generally have a favorable opinion of Cisco. 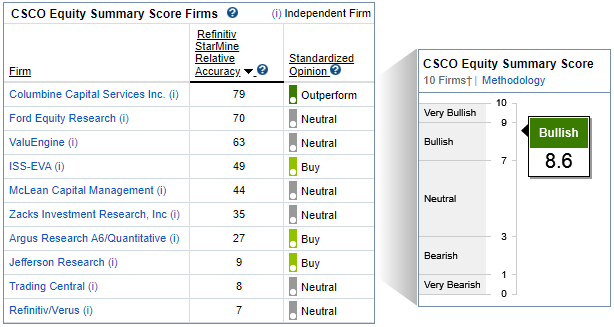 Nearly half of the 27 analysts surveyed by Thomson Reuters consider CSCO a “Hold,” but slightly more combine to say it’s either a Strong Buy or Buy.

Looking at a few individual analysts, Argus calls Cisco a “Buy” with a $65 price target; CFRA rates it 4-stars on its 1-5 scale with a 12-month target of $52; and Schwab predicts that the stock will Outperform over the coming year.

Value Line, which gives Cisco its top score for Financial Strength (A++), forecasts 50% to 75% price appreciation over the next 3 to 5 years (red-circled area). VL also shows a $60 target price over 18 months (yellow highlight). 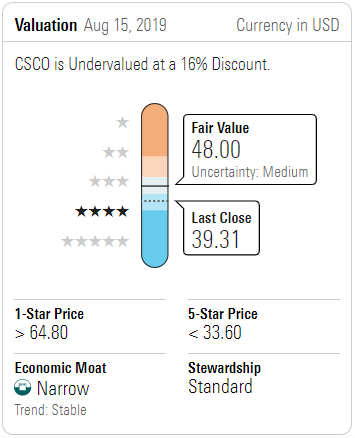 It should be noted that Cisco’s earnings (and those of hundreds of other companies) likely will be adversely affected by the pandemic.

That could result in earnings misses and in guidance being adjusted downward, so metrics should be little more than a rough guide at this point.

Simply Safe Dividends, meanwhile, says it could be a sign of undervaluation that Cisco’s current yield is significantly higher than its 5-year average. 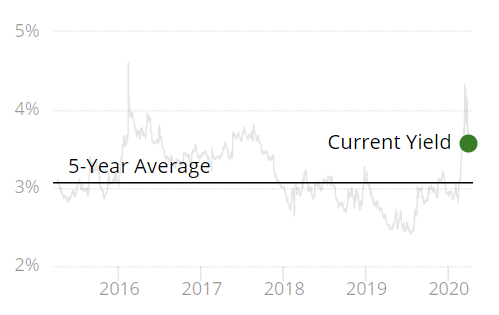 FAST Graphs indicates that CSCO is fairly valued to slightly undervalued, as the company’s current “blended P/E ratio” of 12.69 is lower than its 13.47 norm for the last dozen years. 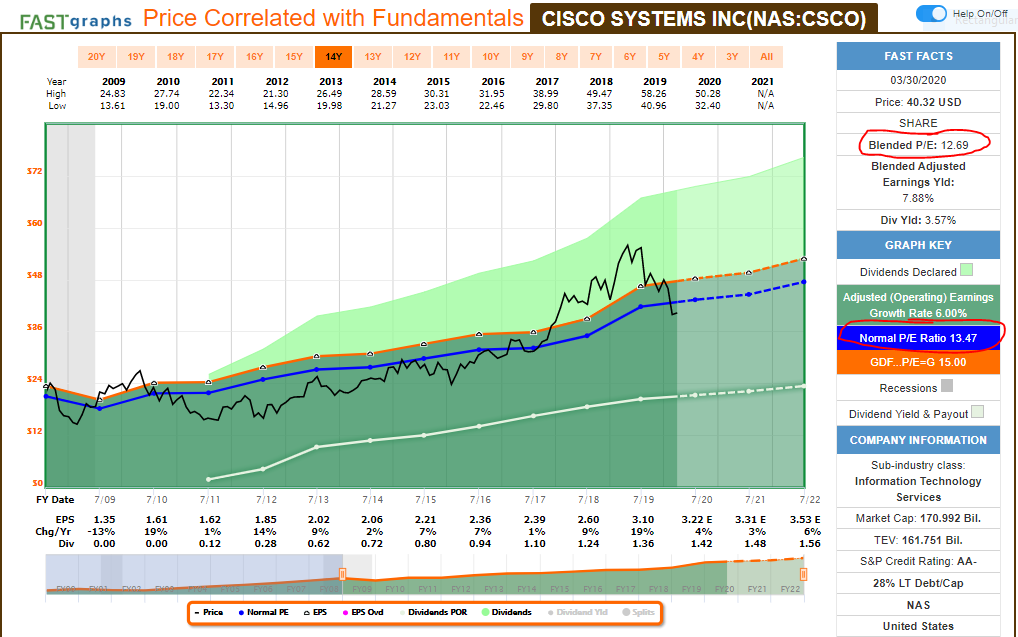 Cisco was not one of the nine stocks he mentioned, but it very well could have been because it is a high-quality, blue-chip company held by many DGI practitioners, and its price has dropped during the crisis.

There is no way to know if CSCO will fall significantly over the next few months, move up in price, or stay right around where it is.

I do know it is a well-run business in an essential industry, so I’m confident Cisco will be a sound long-term investment for the Income Builder Portfolio.