These last few weeks, following the stock market has been like watching an action flick filled with cars crashing, then taking flight, then spinning out, and then crashing again … only with more explosions, blood and anguished screams. 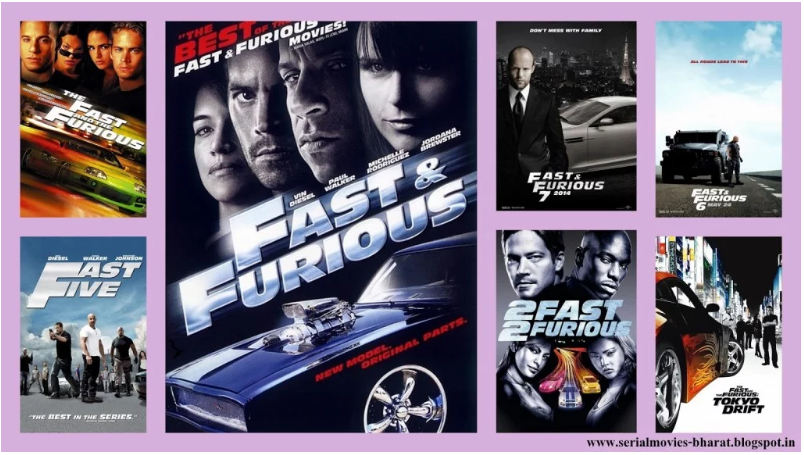 With businesses and workers looking at rough economic times due to the COVID-19 coronavirus, Congress and the White House spent much of Tuesday, March 17, formulating a stimulus package that could cost $1 trillion.

According to numerous reports, the plan would include bailouts to airlines and other industries, as well as a $1,000 check being sent out to each and every American adult.

Whatever final form the stimulus takes, Mr. Market clearly approved, as the major indexes jumped 5.2% to 6.2%.

That climb came just one day after the Dow plummeted 13% — a horrific, fiery crash not even Vin Diesel could love.

Of only slightly less consequence Tuesday, we made our latest $1,000 buy for the Income Builder Portfolio: off-price retailer The TJX Companies (TJX).

I executed a purchase order on Daily Trade Alert’s behalf for 25 shares at $40 apiece. 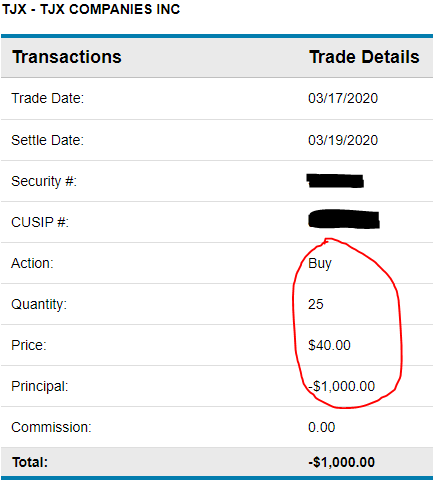 I directed and performed my own little chase scene in pursuit of the stock, first trying to get shares for under $39 before deciding I’d better grab ’em at $40.

I made my move just in time — the stimulus news came out shortly thereafter, and TJX moved up throughout the day before hitting $42.51 at market close.

I talked a lot about the company’s quality in my previous article.

And as the company demonstrated in a slide on its investor relations website, TJX has performed well rain or shine. 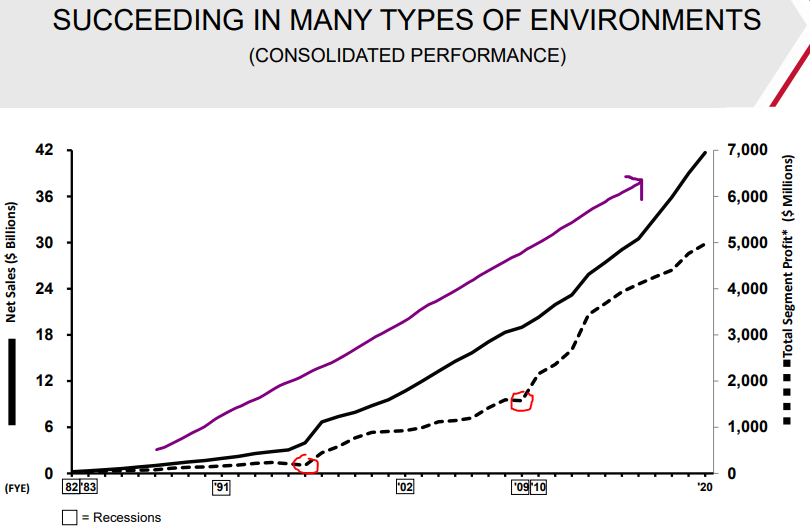 The little red circles above show the only two slight earnings dips during this span, while the purple arrow indicates that sales have moved in only one direction.

Another thing that has gone nowhere but up for TJX has been its dividend.

In announcing a 13% hike to kick in starting with its June payout, the company has raised dividends 24 consecutive years. Most of those increases have been of 20% or more.

The following slide from the company’s February investor presentation shows how TJX has taken care of shareholders via dividends and buybacks during the last decade alone. 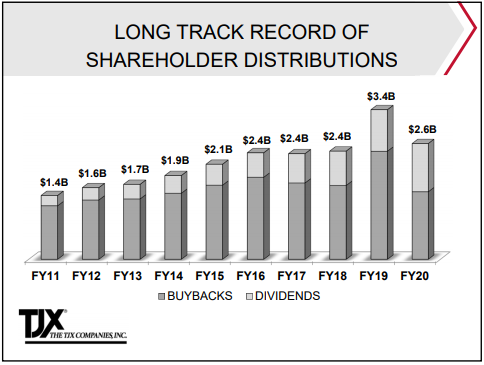 Simply Safe Dividends has raised the company’s safety score from 78 (“Safe”) to 86 (“Very Safe”) since we bought it last year.

SSD cites a reasonable debt load and favorable payout ratios as reasons for TJX getting such a good grade.

The following graphic from McLean Capital Research underscores how easily TJX can cover the dividend with its free cash flow.

The pending dividend raise to $1.04 annually, combined with the recent price fall of TJX (and most other stocks) due to coronavirus hysteria, puts the company’s forward yield at about 2.5% — near its highest level ever.

At the quarterly rate of 26 cents, our TJX position will generate $11.52 in income this June.

The IBP Business Plan mandates that dividends get reinvested back into the same companies, so the portfolio will receive about .27 of a share more.

Then, come September, the new share total (about 44.58) will generate another $11.59 in income, which will buy another fraction of a share.

And that’s how we build our income stream, not just with TJX but with all 31 IBP positions. It’s also why we gave this project the name we did.

Market-watchers are high on TJX, as evidenced both by Fidelity’s compilation of 10 analytical firms and Thomson Reuters’ survey of 28 analysts. 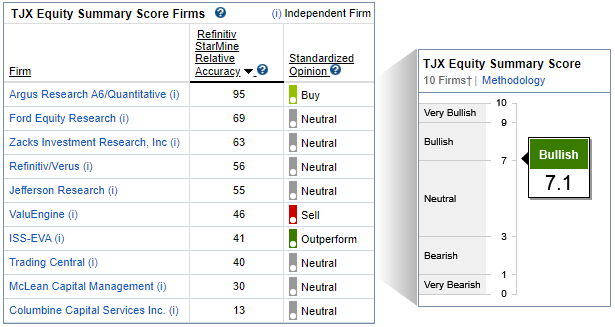 The following is a sampling of analysts bullish on the company: CFRA, Schwab and ISS-EVA. 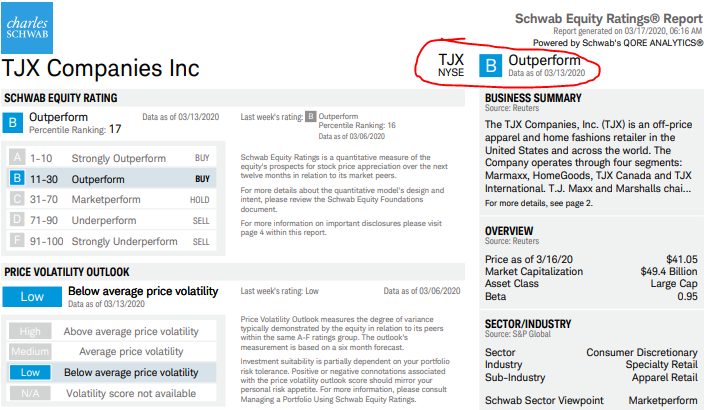 Every evaluator we could find believes we got a good deal on the TJX shares we bought at $40.

Morningstar’s Zain Akbari says shares are trading at a steep discount and says Morningstar soon will be increasing its fair value for TJX higher than the current $51.

The following graphic, also from Morningstar, shows how current valuation metrics compare favorably to what has been typical for TJX. I especially like the sub-15 forward P/E ratio and the PEG ratio down near 1.

ValuEngine assigns TJX a fair value of $59 and CFRA says shares should be trading at about $51.

In addition, Value Line sees a lot of upside for TJX, both in the intermediate term (yellow highlight in graphic below) and long term (red circle).

One of the best looks at TJX’s valuation comes courtesy of FAST Graphs, which uses “blended P/E,” a combination of trailing and forward price/earnings ratios.

The red-circled area on the right shows a blended P/E of about 15. The main area of the graph indicates that the last time TJX has traded at this valuation was October 2011 — and it shows how investors who bought it back then were rewarded handsomely. 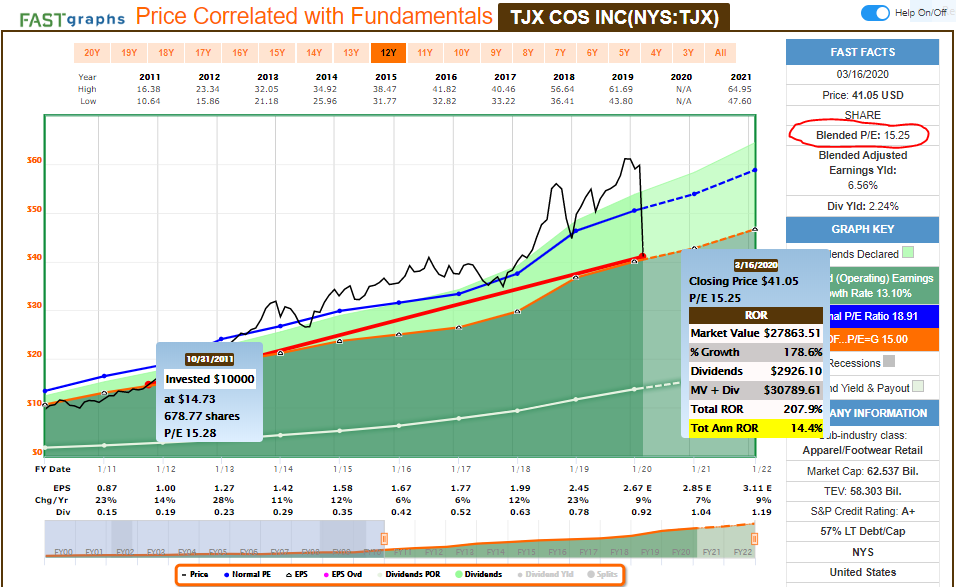 All the information in the valuation section above makes me confident that we did not overpay for TJX.

Nevertheless, these are not normal times. Many businesses will fail to generate expected earnings because of the coronavirus’ effects on their industries, and we do not know yet if TJX will be one of those companies.

However, history has shown that TJX is very resilient — and very popular with consumers during both good times and bad.

So I feel pretty darn good about paying only $40/share to more than double the size of the Income Builder Portfolio’s stake in such a high-quality, dividend-growing operation.

In this otherwise wild, crash-and-dash investing world of ours, it’s nice just to chill out and calmly watch a boring company do its steady, predictable thing.