On March 1, my wife and I boarded a Norwegian Cruise Line ship for a week of fun in the Caribbean sun. 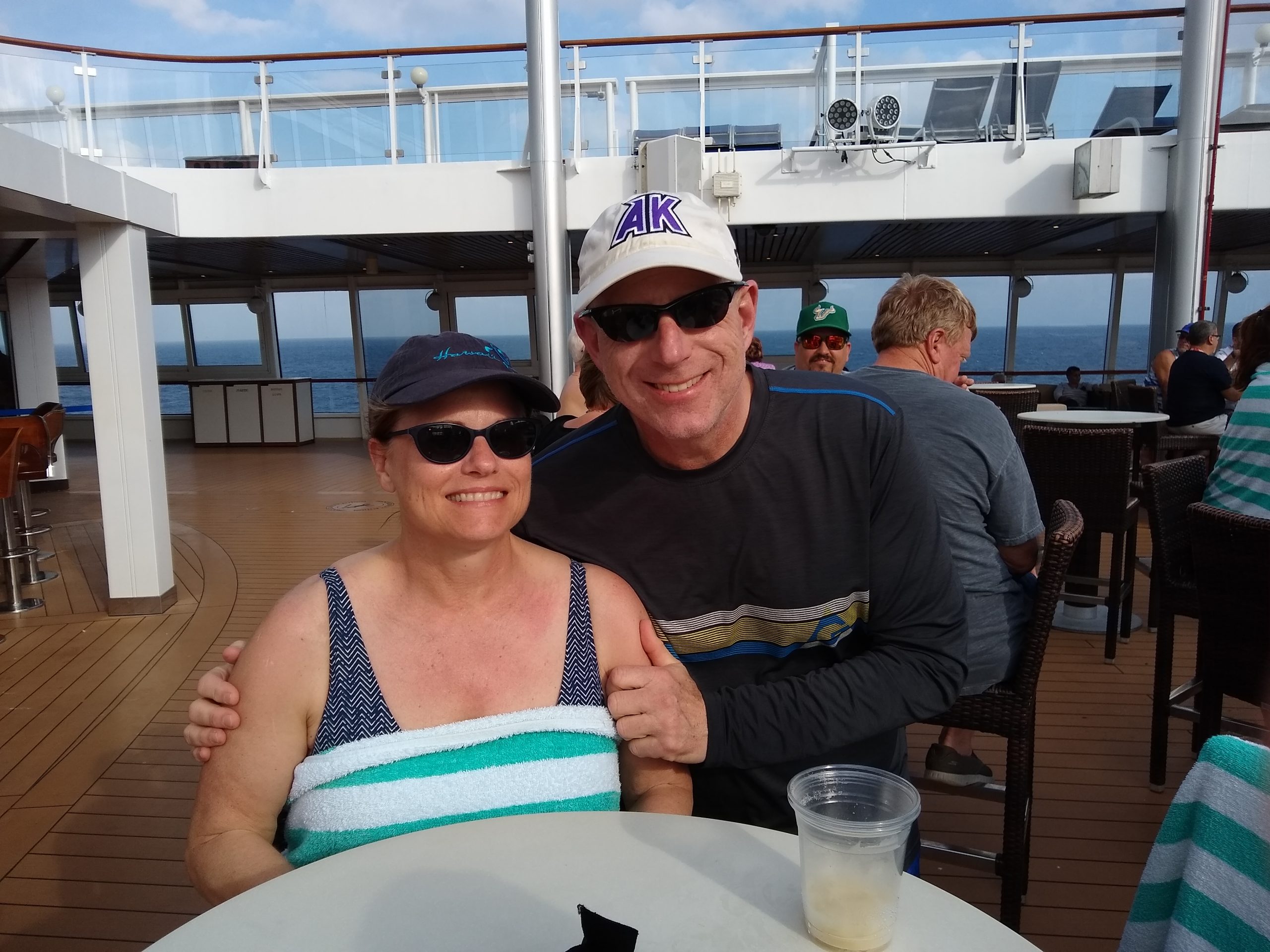 We explored several ports, ate well, enjoyed a beverage or three, got some rays, soaked in hot tubs, took in a few shows … all the things one does on a cruise ship. I even finished third in a poker tournament, pocketing a whopping $68.

Upon our return to Tampa, we were greeted by this tweet from the U.S. State Department: 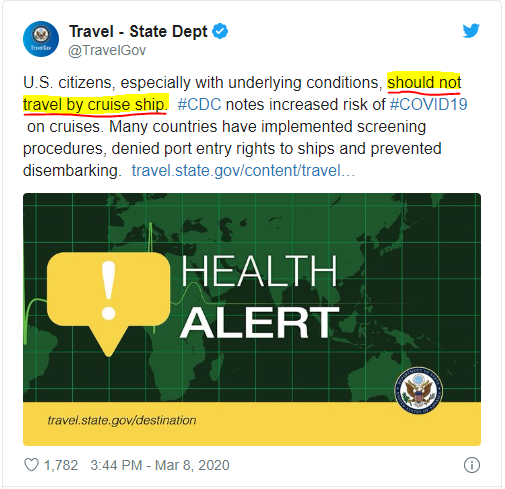 I am glad to report that, to the best of our knowledge, neither Roberta nor I (nor the friends who joined us on our voyage) contracted the coronavirus known as COVID-19.

Of course, thousands of others around the world haven’t been as fortunate — and most experts believe we will be talking about millions in the not-too-distant future, as the situation officially has been classified as a pandemic.

Even Donald Trump — who had spent months lying about the virus’ likely impact on Americans and downplaying its severity — finally declared a national emergency.

Major corporations have told employees to stay away and work from home, and smaller businesses are preparing for severe slowdowns.

Governors of many states have enacted executive orders prohibiting large gatherings, and some have ordered restaurants to close. Universities, high schools and elementary schools have announced closures.

With the nation’s economic picture looking bleak for the foreseeable future, the stock market has plunged harder and faster than at any time since the Great Recession. 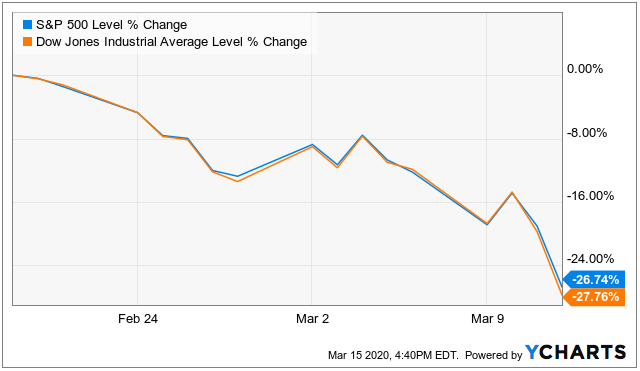 This chart shows the market’s fall from the Feb. 19 peak through March 12. A rebound March 13 recovered some losses, but many fear it was a short-term reprieve.

The market also has been adversely affected by an oil battle between Saudi Arabia and Russia that has sent oil prices plummeting.

While that situation eventually can be resolved through negotiations, the coronavirus can’t — and most infectious disease authorities believe things will get much worse before they get better.

Anthony Fauci, director of the National Institute of Allergy and Infectious Diseases, told NBC’s “Meet the Press” on Sunday that Americans “have to hunker down significantly more than we as a country are doing” to combat the outbreak.

He is advocating a 14-day national shutdown — similar to the extreme measures that a few European countries have undertaken.

Meanwhile, the Federal Reserve took the unusual step of making a major Sunday announcement: Hoping to stem the economic fallout from the pandemic, the Fed is slashing interest rates to zero and buying hundreds of billions of dollars in bonds.

That was the backdrop as I closed in on my next stock selection for our Income Builder Portfolio.

Believe me, I am not complaining, as my pick obviously matters little in the grand scheme of things.

Nevertheless, I agreed to build this portfolio, Wall Street has not shut down, and my editors at Daily Trade Alert are still allocating $2,000 for me to buy shares of two companies per month on their behalf.

So like all of those who have jobs to do, I’ll keep doing mine even during these difficult times.

When the economy is wavering and there are so many future unknowns, I like to focus exclusively on very high-quality companies.

The problem I faced as I considered this selection was that, despite the market’s plunge into bear territory, I still believe most such companies are overvalued.

For example, even though one of my favorites — NextEra Energy (NEE) — saw its price drop 22% since mid-February, it has gone from outrageously overvalued to merely too expensive. I don’t like buying any company trading at 26 times earnings, let alone a utility. 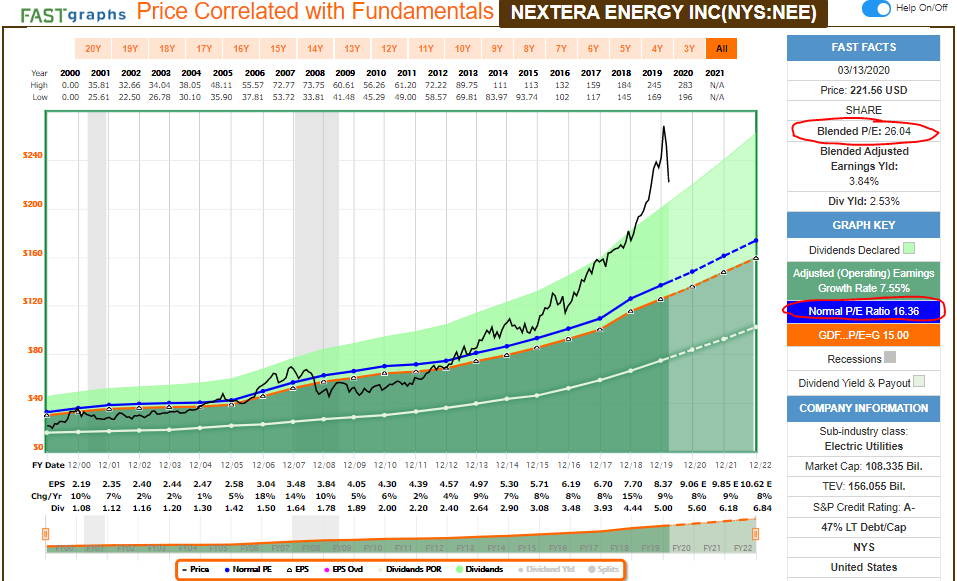 I also decided to build up an existing IBP position rather than open a new one. Focusing on those I have not yet chosen multiple times, I settled on TJX Companies (TJX).

Come Tuesday, March 17, I will execute a purchase order for about $1,000 worth of the off-price clothing and home furnishings retailer, which is best known for its TJ Maxx, Marshalls and Home Goods brands.

Unlike the items its stores sell, TJX stock rarely is discounted … and it isn’t particularly cheap now at 19 times earnings. However, as the following FAST Graphs illustration shows, that is just about its normal P/E ratio since the end of the recession. 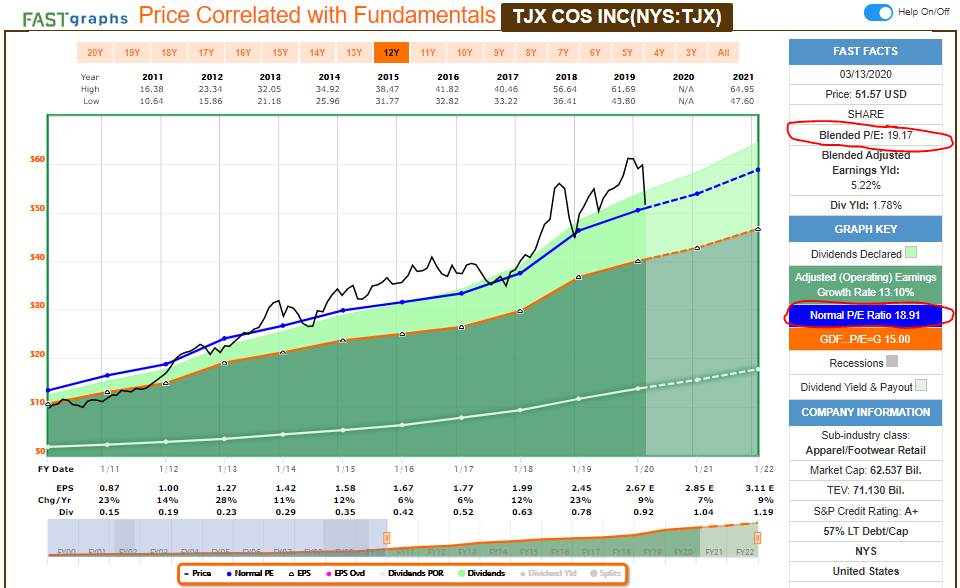 I will discuss valuation a lot more in my post-buy article, which will be published Wednesday, March 18. I nonetheless want to call attention to one more thing in the above image: TJX’s earnings (orange line) have increased annually, and are expected to keep doing so for years to come.

Because I wrote extensively about TJX when I selected it for the IBP and purchased it last April, I won’t go into every last detail about the company here.

What I will add is that, since then, TJX has had four solid quarterly earnings presentations — including an especially encouraging report just last month. 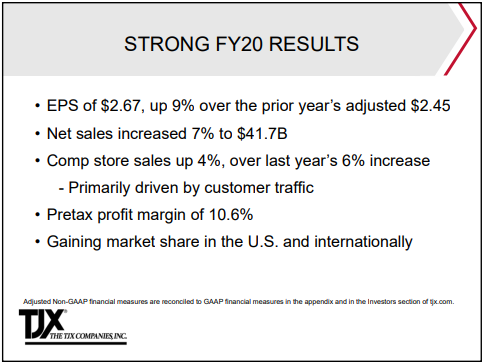 Did TJX do something wrong to make that swoon happen? Absolutely not, except get swept up in the same hysteria that drove down prices market-wide.

If the economy continues to suffer, consumers are more likely to turn to a discount retailer for clothing and goods. The company’s drawdown during the Great Recession was nowhere near as severe as that of the overall market.

And what’s cool is that TJX also performs extremely well when times are good; it has absolutely thrashed the market since the recession ended.

Our TJX position has had a total return of minus-3.5% since we bought it last April 9. That obviously is nothing to crow about … although it still has beaten the S&P 500’s return of minus-5% since then.

In addition, TXJ excels in what I call “quality metrics.”

While TJX’s 2% yield is one of the lowest of the IBP’s holdings, the company has been a dividend-growing machine for more than two decades. 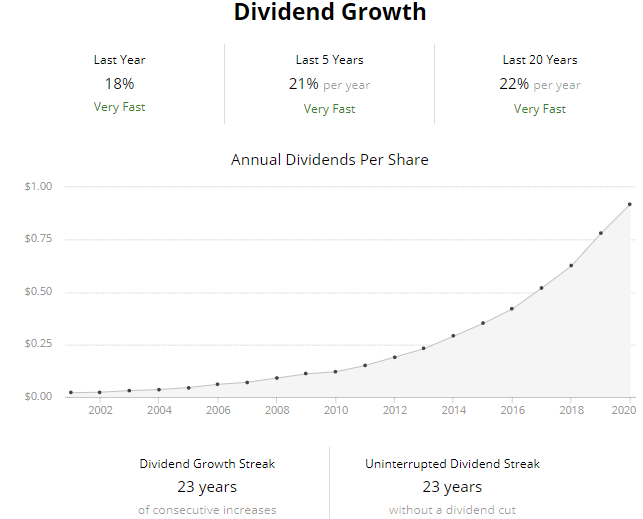 TJX recently announced a 13% dividend increase beginning with its June payment. That marks its 24th consecutive annual raise, putting it within one year of joining the exclusive Dividend Aristocrats club.

The market’s decline of more than 20% in the past month signals that the 11-year bull run is over. The big questions now are how long the COVID-19 pandemic will last and what its long-term effect on the economy will be.

I have no reason to doubt the experts who believe the worst is yet to come, and I have held off buying anything in my personal accounts.

However, if I were a relatively new investor trying to build a portfolio — such as the IBP — I probably would be making small, regular buys of high-quality, reasonably valued companies with proven records of earnings, sales and dividend growth.