As I sat down to write my monthly Valuation Zone article, the idea almost seemed silly. Why discuss a stock that is undervalued when the whole market is crashing?

So this month, instead of highlighting a single undervalued stock, let’s talk about why valuations matter even when the stock market is crashing.

Here’s what the most widely used market index – the S&P 500 – has done since it hit an all-time high on February 19. 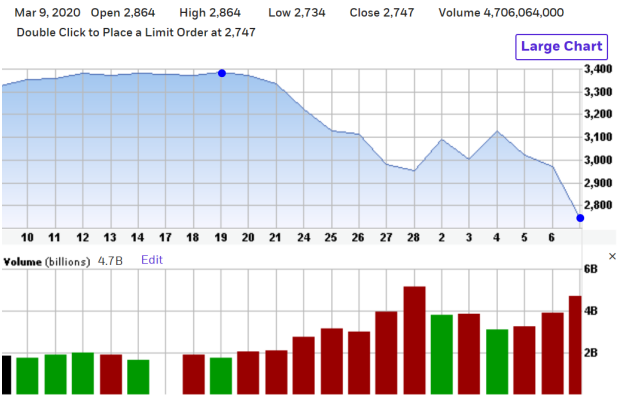 The blue dot at the top of the chart shows that the S&P 500 closed on February 19 at 3386. That was (and still is) its highest closing value ever.

The bars across the bottom show the volume of shares traded each day, and their color shows the direction of the market that day: red = down and green = up.

With only two up days since February 19, the market feels like it is being driven by panic-selling. Factors include coronavirus, the oil price war, and falling interest rates.

Any time you buy a stock, you assume financial risk. If you are a dividend growth investor like me, the most relevant is the risk to the dividend.

After dividend risk, the other big risk is price risk. Price risk exists because stocks trade in the market, and traders have an infinite number of reasons for making trades. Besides being influenced by fundamental facts and numbers about a company, they are often influenced by emotions.

Emotions can drive markets to extremes. Obviously, in the 13 trading days since February 19, the predominant emotion has been fear. In a market like this, all stocks get caught, even the well-valued ones. Very few stocks can buck the market trend when the trend is negative 7% in a single day.

Here’s why I think valuations matter in a market like this. Valuations play out over long terms – months, years, even several years. Assuming that a company’s business performance remains sound, a stock that was well-valued before a market crash is even better valued during and after the crash.

Valuations give you reference points to answer whether a stock is:

The valuation reference points reside in the rational, fact-based part of the trader’s mind. People buy stocks when they think they are going to make money. Valuations help point to which stocks are most likely to do that. The reasoning is that over time, a stock’s market price will gravitate toward its fair value. 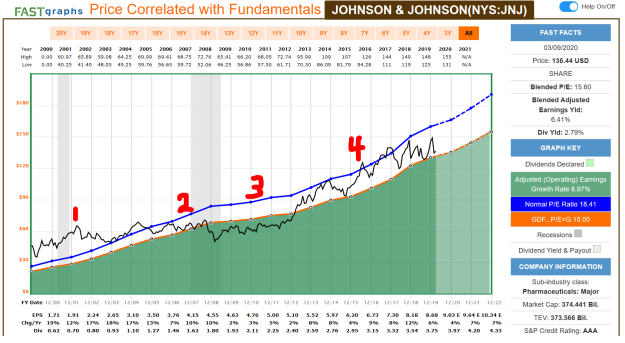 The graph has two reference lines for JNJ’s fair price at any given time.

Over the years, there have been several sharp price drops, and it’s probable that during those times, some investors panicked and sold out of JNJ, even though the wide-angle view shows that JNJ stayed fairly valued even through those price swings.

Let’s divide those 20 years into segments, numbered 1-4 on the chart above.

(1) At the beginning of the graph, from 1999 through mid-2005, the price line is above both reference lines. That means that JNJ was overvalued. It was not a great time to buy the stock. If you pick out a time in, say, 2002 and scan to the right, you can see that it wasn’t until 2012 that JNJ’s price got higher than what you paid in 2002. Valuation told you that JNJ was overvalued in real time, in 2002: It was knowable for anyone who cared to look.
(2) From 2005-07, JNJ was fairly priced. Its price was between the two reference lines.
(3) Starting in the middle of the Great Recession in 2007 through 2012, JNJ’s price was below both reference lines. It was undervalued and a great time to buy. Scanning to the right, JNJ’s price began to rise in just a few years, “catching up” to its intrinsic value.
(4) From 2012 on, JNJ’s price has zig-zagged back and forth, but it has generally remained in the territory of fair value.

You can see the same thing by looking at JNJ’s yield through the same years. The following graph’s red line shows JNJ’s yield at the end of each year. 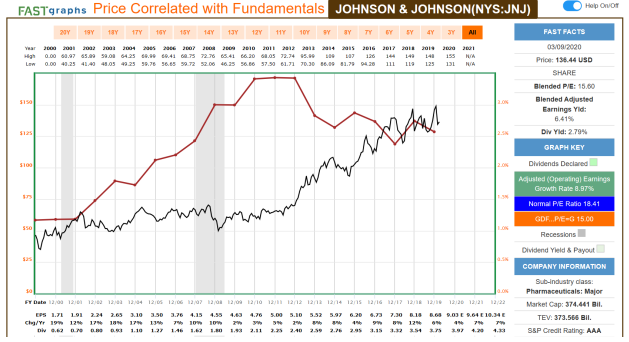 The best time to buy a dividend growth stock is when its yield is higher than normal, because that usually indicates the stock is undervalued.

These two charts show why valuations matter: If prices (and yields) tend over time to gravitate toward their intrinsic or natural values, then buying at good valuations makes sense. More specifically, if a stock is undervalued or its yield is more than normal, its price will tend to gravitate back to fair value, meaning it will trend up.

And while that means that current yield will come down (also gravitating to normal levels), with dividend growth stocks, it does not mean that your income will go down. Your income will be based on the yield you got when you bought it, augmented by dividend raises each year. 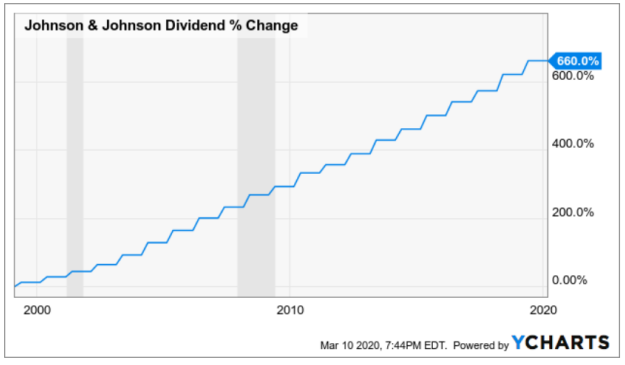 This principle holds true even when the markets are gyrating as they are now. In the JNJ example shown above, the timespan includes the Great Recession of 2007-2009, which was accompanied by a market crash of nearly 50% in the S&P 500. The market recovered, as it always had. So did JNJ’s price.

It can be hard to remember long-term principles when short-term craziness is all around. But that’s what I suggest that investors do.

In my Dividend Growth Portfolio, I reinvest dividends when they accumulate to $1000. There’s $950 there right now, so the kitty will top $1000 in a few days. When that happens, I will do what I always do: Pick out a well-valued, high-quality dividend growth stock and buy it.

The fact that the market is way up or way down on the day, week, or month will not have any effect on that decision. I will stick to my long-term strategy.

And with prices generally down, I will be able to find a great stock at better-than-normal valuation, which means a higher-than-normal yield. That fits perfectly into my strategy of growing my dividend stream over time.

I have faith that over the long haul, prices will take care of themselves despite short-term variations, including crashes.

Disclosure: I own JNJ.