Although I certainly believe that valuation matters, I have tried to focus primarily on the quality of each business when selecting stocks for DTA’s Income Builder Portfolio.

Sometimes, however, a blue-chip company is trading at such a compelling value that I’m willing to overlook a few warts.

As this article progresses, I will discuss the pros and cons of investing in AT&T, but first things first … Shares of AT&T are dirt cheap!

Well, AT&T isn’t quite as inexpensive now — with a forward price/earnings ratio of about 10.5 compared to 9-ish back then — but the ratio is still pretty attractive relative to its 5-year average (about 12.2).

That, combined with the company’s high dividend yield and its strengthened financial situation, has led me to select AT&T again.

Come Tuesday, Feb. 18, I will execute a purchase order on Daily Trade Alert’s behalf for about $1,000 worth of the stock.

So Far, So Great 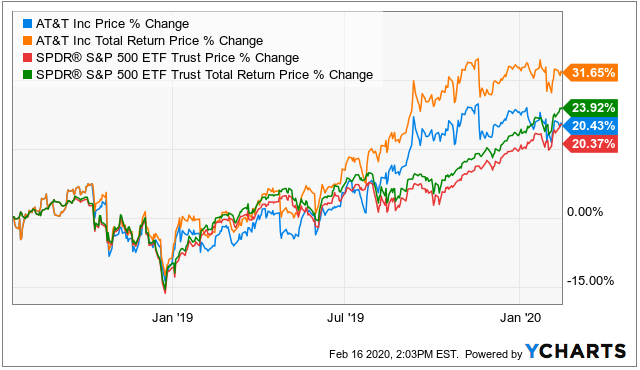 When I look at the above chart, a couple of interesting things pop out at me.

Since we bought AT&T, the position has generated about $100 in income, which subsequently purchased nearly 3 additional shares. 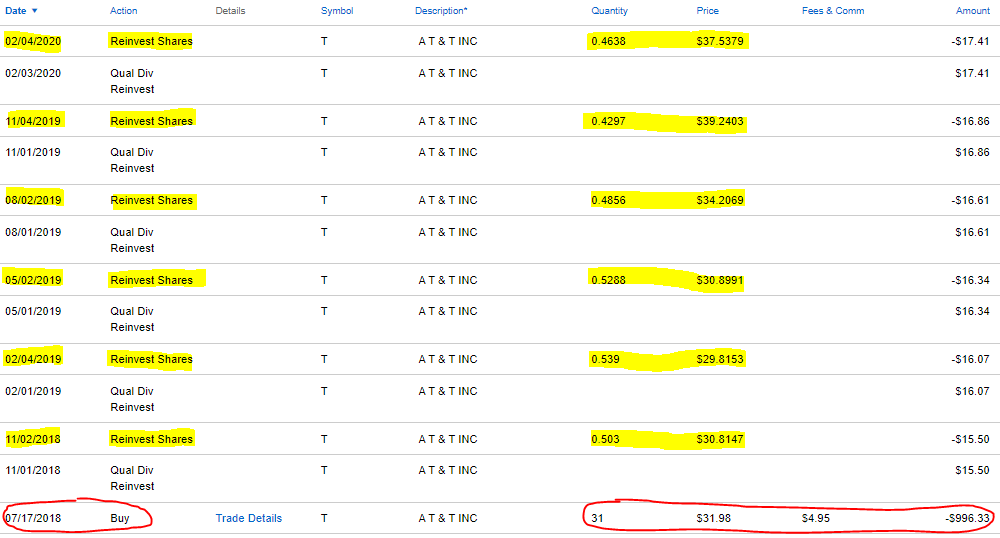 As indicated in the above graphic, our six AT&T dividend reinvestments were at prices ranging from $29.82 to $39.24, showing how “dripping” (to use the informal term) resembles dollar-cost averaging.

When we bought AT&T 19 months ago, Simply Safe Dividends had given the company a “Borderline Safe” score of 55. 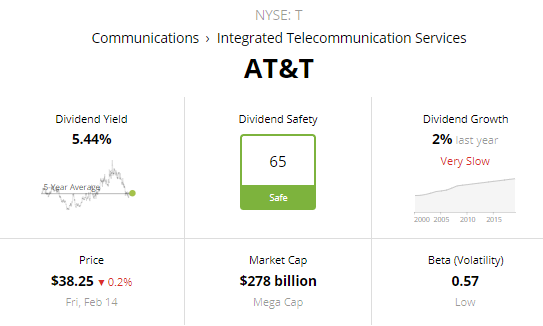 Here is a closer look at AT&T’s debt picture, which has improved now that the DirecTV acquisition of 2015 is well behind them and the Time Warner merger passed all regulatory hurdles about a year ago.

During its 2019 Q4 earnings call last month, AT&T boasted about its successes in 2019, including the debt reduction it achieved (circled in red). No wonder T’s stock price recovered so nicely. 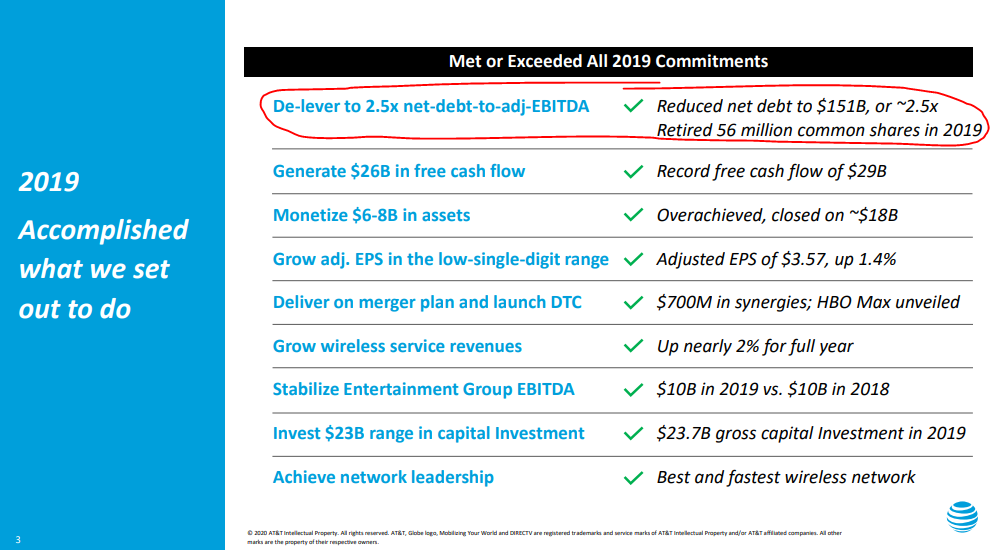 The company also said it was on target to meet its goals for the next 3 years.

In the slide below, the red-circled area shows more debt-reduction expectations; the blue-circled area indicates projected earnings-per-share growth, which if delivered means T is now trading at 8 times expected 2022 earnings; and the yellow-highlighted area is the promise of continued dividend growth. 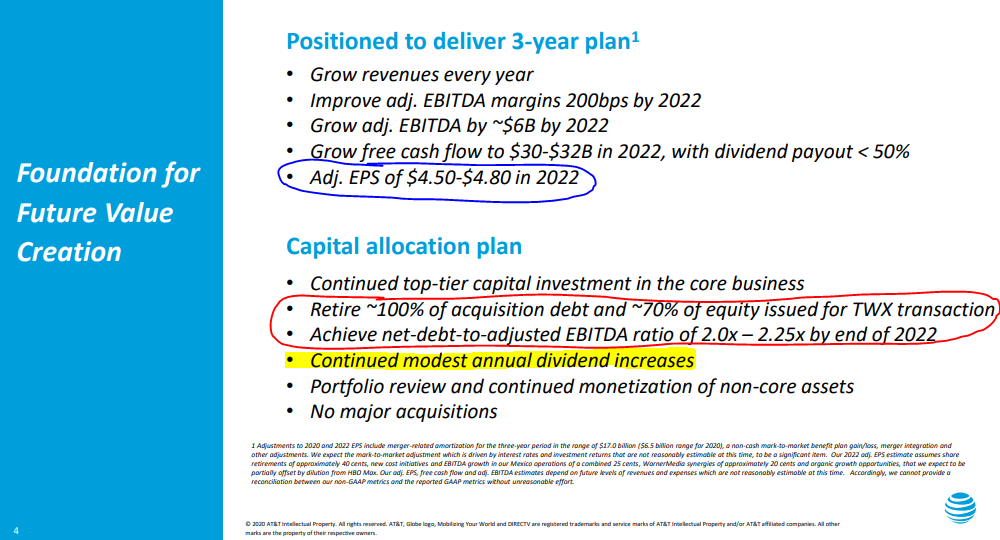 AT&T has grown its dividend for 36 consecutive years. Over the last decade, however, the growth has been a paltry 4 cents per year.

Nevertheless, given T’s 5.4% yield, it would take some of the lower-yielding companies in the IBP decades of double-digit dividend growth to “catch” AT&T’s income production.

So much has changed in the last quarter-century that AT&T bears little resemblance to the old utility-like, monopolistic “Ma Bell” of yore.

Today, it is less a telecom company than it is a media and technology business.

In fact, T now officially is listed within the Communication Services sector that was created last year. Others in that group include Alphabet (GOOG), Netflix (NFLX), Disney (DIS) and Facebook (FB).

The next two slides from the 2019 Q4 earnings presentation show how much importance AT&T has attached to both its mobile network (including plans for nationwide 5G) and the stand-alone streaming service it calls HBO Max. The latter was made possible by the Time Warner deal. 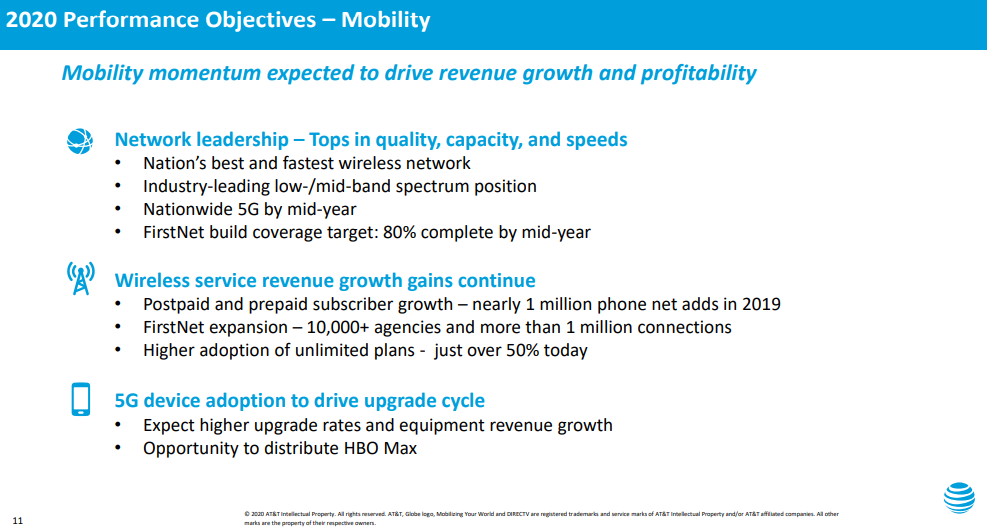 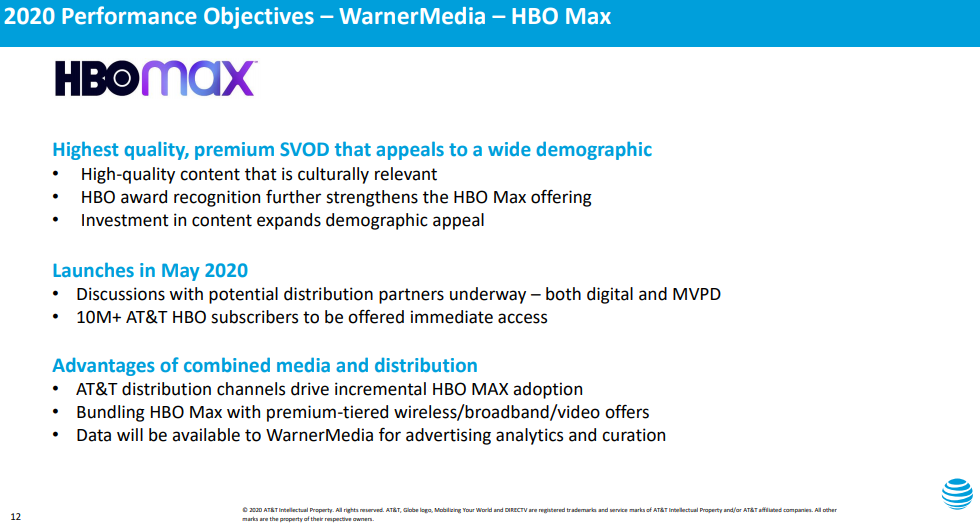 Value Line also has included AT&T in two of its model portfolios: Stocks for Income and Potential Price Appreciation, and Stocks with Above-Average Dividend Yields — making T one of just a handful of companies included in multiple VL portfolios.

I will discuss valuation at length in my post-buy article, which is scheduled to be published Wednesday, Feb. 19, but suffice it to say that I believe AT&T is reasonable at its current price.

Whereas valuation was the main reason I selected T for the Income Builder Portfolio the first time, I did believe it was a quality company back then … and its fundamentals definitely are stronger now.

Obviously, I can’t guarantee this AT&T buy will experience the same total return over the next 19 months that the stake we bought in July 2018 did for the past 19 months. I nonetheless am confident that T will be a solid long-term holding for the IBP for years to come.