Chevron (CVX) is the 8th-largest oil and gas company in the world (measured by 2019 revenues). 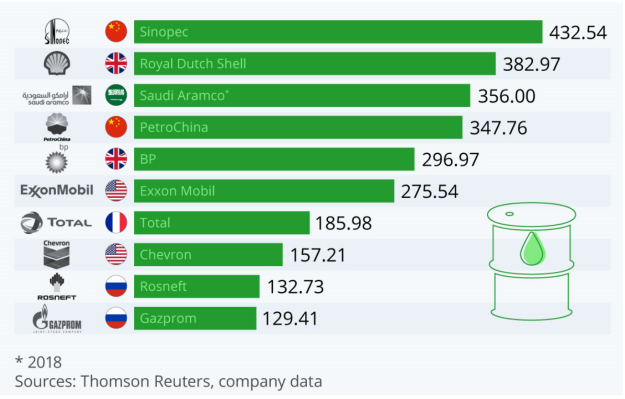 Like all of the oil and gas “majors,” Chevron’s fortunes are correlated with the price of oil. The following chart shows crude oil prices from 2015 to the present.

Since then, crude prices have been pretty steady, mostly hanging around the $50-$60 range.

Chevron’s stock price has pretty much reflected oil prices. It peaked in 2104, plunged along with oil prices in 2014-2016, and has been relatively steady since then. 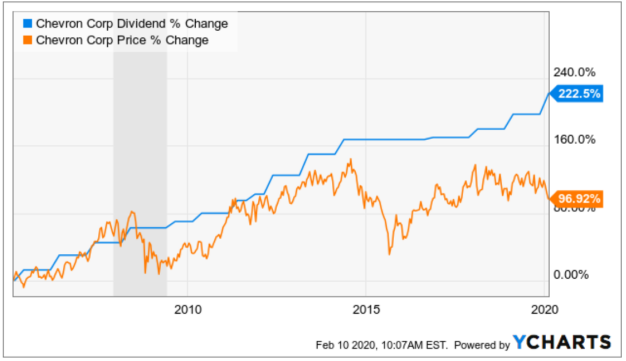 In response to the 2014-2016 oil price crash, Chevron pulled in its horns in a lot of ways, including keeping costs and capital expenditures under control.

Chevron is good at that. Throughout its history, the company has displayed great skill in managing its costs and making intelligent capital allocation decisions.

These skills are important given Chevron’s ultimate dependence on oil prices.

One of the ways that Chevron tightened up when oil prices dove was that it froze its dividend (blue line above) for several consecutive quarters, then declared tiny raises in 2015 and 2016 to keep its annual dividend increase streak alive.

That streak is now 32 years. In the past couple of years, Chevron has increased the size of its increase. At the end of January, 2020, Chevron announced an 8.4% increase in its quarterly payout, which is its largest increase since 2013.

I derive Quality Snapshots from the following sources, which I have come to trust and respect over the years.

You can read more about Quality Snapshots in the brand-new Dividend Growth Investing Lesson 20: Quality Snapshots. It explains in more detail the sources behind the ratings and how I score them.

Chevron is one point short of a perfect score in its Quality Snapshot. On a 0-to-5-point scale for each metric, the company scores 24 out of 25 possible points. Only a small number of companies score that high.

As to its dividend, Chevron’s yield is 4.7%, making it a high-yield stock at the moment. Combined with its 5-year dividend growth rate of 2.5% per year, I classify Chevron as a high-yield-medium-growth stock.

Note that Chevron’s 5-year dividend growth rate is made up of the small increases during the oil price crash followed by increasing rates since then. I think that, overall, that fairly estimates Chevron’s ability to increase its dividend over the long term.

Chevron’s dividend is very safe, as noted by both its Dividend Safety Grade of 85 as well as its 32-year streak of increasing its dividend every year.

Chevron in the Valuation Zone

We not only want to own high-quality companies, we want to buy them at fair prices, or even bargain prices if we can get them.

How much is Chevron worth? To value a stock, I employ four different valuation models, then take an average of the four estimated fair prices that the models produce.

The first model checks the stock’s current price against FASTGraphs’ basic estimate of its fair value. FASTGraphs is a tool that uses price-to-earnings (P/E) ratios to estimate fair values.

In its default mode, FASTGraphs uses the historical average P/E ratio of the whole stock market (which is P/E = 15) to represent a fair valuation. That P/E = 15 value is used to draw the orange fair-price reference line on the following graph.

I circled that value for the orange line along with Chevron’s own P/E ratio of 18 that pertains to Chevron’s actual price, which is the black line. 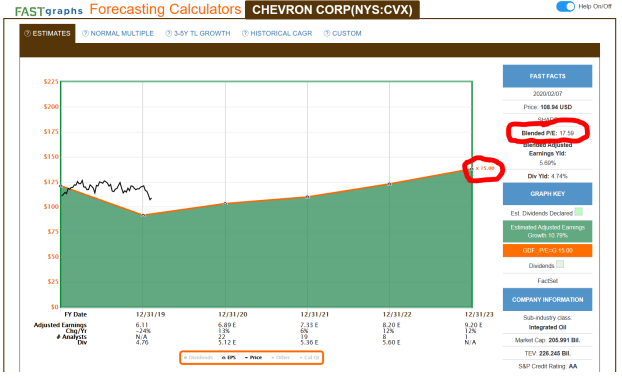 The black price line is above the orange reference line, which suggests that Chevron is overvalued.

That valuation ratio suggests that Chevron is 17% overvalued.

FASTGraphs offers another fair-value reference line. This one is based on the stock’s own long-term valuation rather than the market as a whole. That is, this model “normalizes” the valuation to Chevron’s own historical record.

In the following graph, Chevron’s 5-year average P/E ratio (28.4, circled) was used to draw the blue fair-value reference line. Chevron’s price is the black line, and its current P/E ratio is also circled, as in the first chart above. 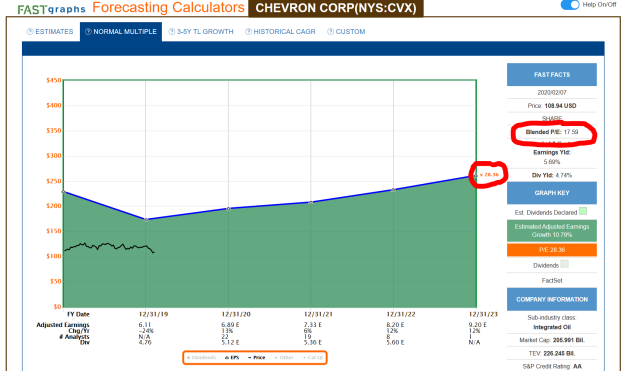 This second model changes the picture considerably, because Chevron’s long-term P/E ratio has been 28.4, much higher than the 15 used in the first model. The black price line is now below the blue fair-value reference line, suggesting that Chevron is undervalued.

Instead, they use a discounted cash flow (DCF) model. This means that they discount all of the stock’s estimated future cash flows back to the present to arrive at a fair value estimate. The idea is that a stock’s fair price is equal to the net present value of all of the company’s future cash flows.

DCF is dependent on the accuracy of the estimates and projections put into the model. My experience with Morningstar is that they use a very well-thought, conservative approach. That’s why I like them.

On the following chart, the black line is Morningstar’s estimate of fair value, while the blue variable area tracks Chevron’s actual price.

The 4th and final valuation model is to compare the stock’s current yield to its historical yield. 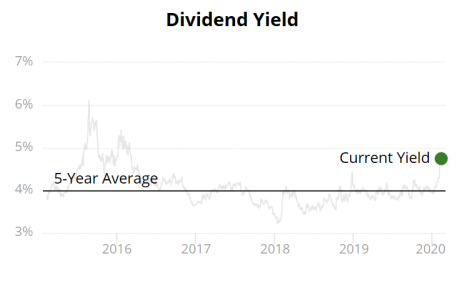 Current yield being above historical yield suggests that Chevron is undervalued. To calculate the degree, I again form a valuation ratio, this time by comparing the yields:

Now that we have valuation estimates from four different models, I simply average them to get a fair price.

The average of the four models suggests a fair price of $133 for Chevron, compared to its actual price of about $109. That’s an 18% discount.

Chevron is a very high-quality company, as shown by its score of 24 out of 25 points on its Quality Snapshot. The obvious risk to Chevron’s stock price is always the price of crude oil, which the company cannot control.

There is far less risk to Chevron’s dividend. The company has increased its annual payout for 32 straight years, and when oil prices are stable, individual raises can be high, as shown by this year’s increase of over 8%.

Chevron is a charter member of my Dividend Growth Portfolio. I have never added to the position since my original buy over a decade ago. That said, with a dividend reinvestment coming up soon, it is hard to ignore Chevron’s value and 4%+ dividend right now.

Here are recent articles on Chevron that you can use for further research.

This is not a recommendation to buy, hold, or sell Chevron. As always, perform your own due diligence. Check the company’s complete dividend record, business model, financial situation, and prospects for the future. Also consider how well it fits (or does not fit) your long-term investing goals.