One year ago, the CEO of Earth Fare said his supermarket chain, based in Asheville, N.C., would open 50 stores across the country by 2024.

Selling mostly natural and organic foods, supplements and other “healthy” products, the executive said Earth Fare was ready, willing and able to give U.S. consumers more of what they were demanding.

“There’s a movement toward health and wellness in the United States,” Frank Scorpiniti confidently told the Charlotte Observer on Jan. 22, 2019. “Customers’ desires are changing.”

Not quickly or strongly enough, apparently.

Citing “continued challenges in the retail industry,” Earth Fare announced this week that it would be shuttering all of its stores, liquidating its assets, and filing for bankruptcy.

I absolutely am not saying the company’s CEO was dishonest or incompetent or evil; I’m just saying it’s not always wise to accept a chief executive’s words as gospel.

What does this privately held business’ inability to follow through on its CEO’s promise have to do with our next stock selection for DTA’s Income Builder portfolio?

Not much, except for this: In choosing our next investment — International Business Machines (IBM) — I am putting a lot of faith in a new CEO who might or might not be the goods.

On Thursday, Feb. 6, I will execute a purchase order for about $1,000 worth of IBM on behalf of Daily Trade Alert.

IBM has struggled to grow revenues for years as it has seen much of its old technology go out of vogue and as it has battled for market share in the crowded, ultra-competitive, cloud-services industry. 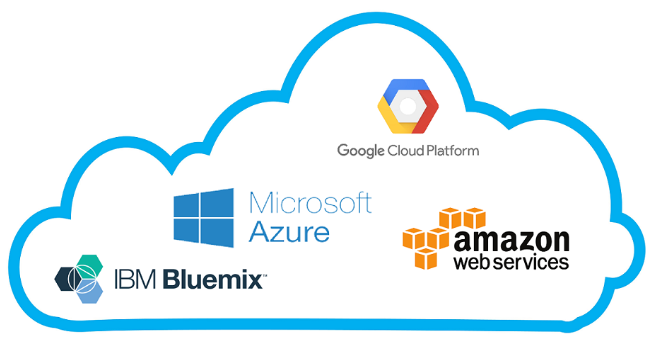 The company then put out a press release announcing that Arvind Krishna would replace Ginni Rometty as CEO.

Mr. Market immediately applauded the change in leadership to Krishna, who as senior vice president for cloud and cognitive software had engineered IBM’s 2019 acquisition of open-source software and services company Red Hat. 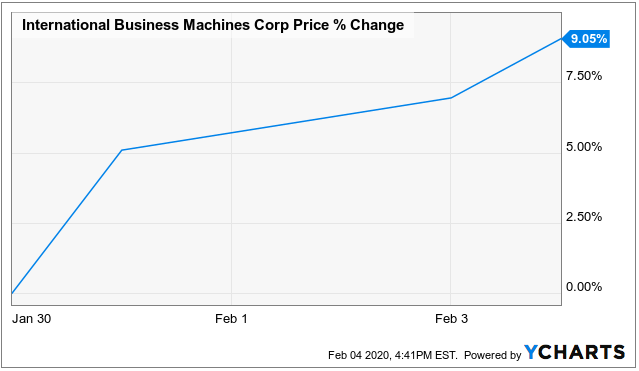 Slipping on my Amateur Market Psychologist Decoder Ring (patent pending), I’m thinking that investors are betting Krishna can do for IBM what Satya Nadella has done for Microsoft (MSFT).

Like Krishna, Nadella’s background was in cloud systems — and Nadella has helped transform Microsoft from a stagnant, old-tech, software company into a growing, vital presence in the cloud universe.

I have written at length about Nadella, pointing to his vision as one of the main reasons I selected Microsoft for the Income Builder Portfolio. To date, our MSFT investment has been a big winner.

So with IBM’s stock price still relatively affordable, I’m willing to give Krishna and Whitehurst an opportunity to do their thing and see where it leads.

Why So Blue, Big Blue?

Under Rometty, IBM has had trouble growing earnings and revenue for many years now. 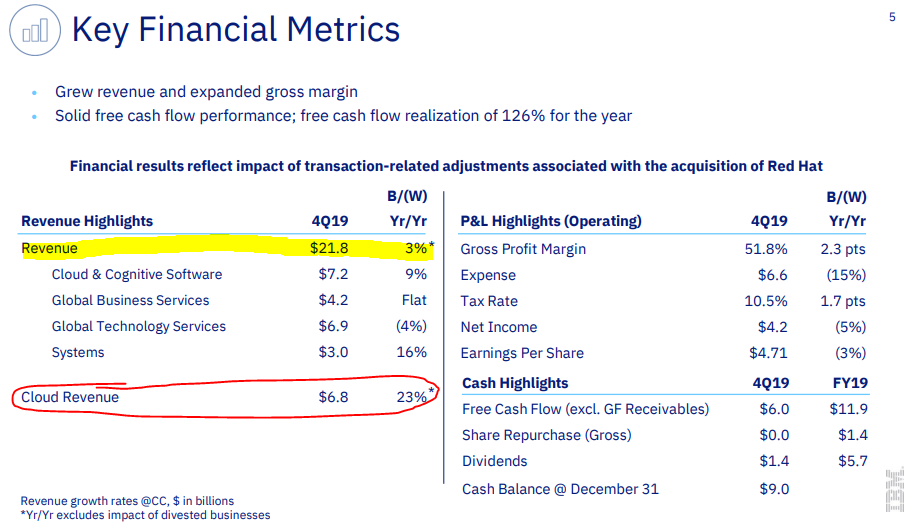 During the call, IBM also forecast EPS growth of about 4% for 2020, along with a 5% increase in free cash flow.

Other financial metrics show that IBM definitely knows how to make money. 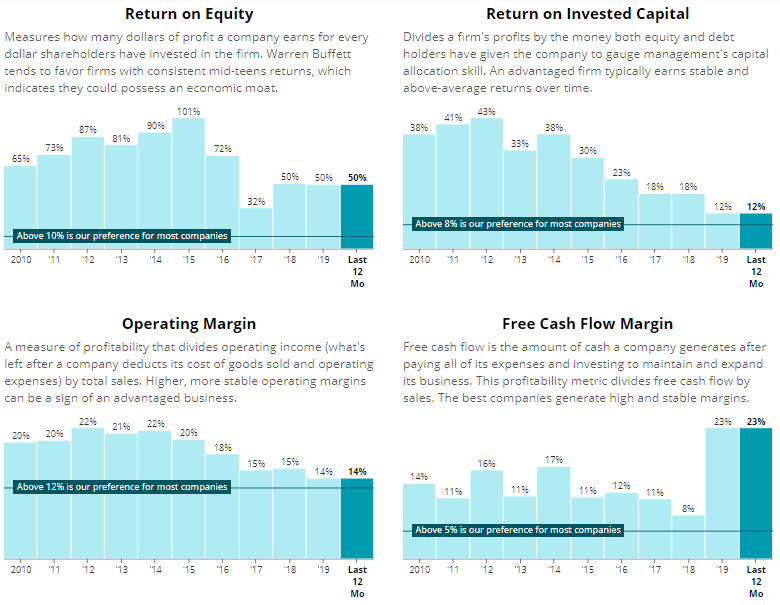 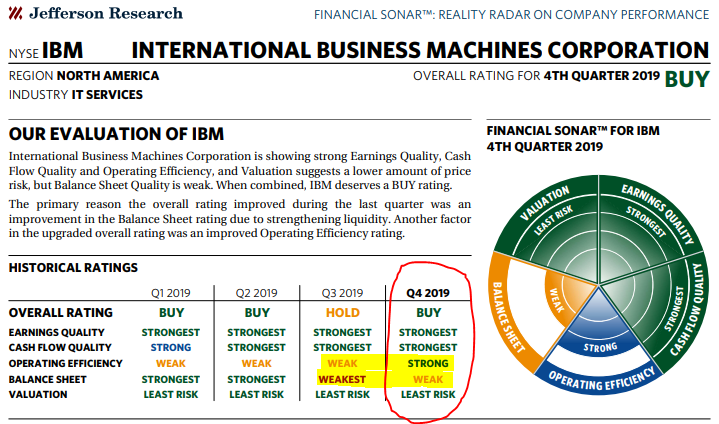 I also use several other sources — such as Morningstar Investment Research Center, Standard & Poor’s, Value Line and Simply Safe Dividends — to assess the quality of potential investments.

The Dope On The Dividend

Through Big Blue’s ups and downs, one thing has been consistently up for nearly a quarter century: the dividend.

Given that the IBP is built primarily using the Dividend Growth Investing strategy, that’s more than a little attractive to me.

Indeed, the continued rise of IBM’s payout to shareholders — through good times and bad for the business, through two recessions, and through wars and political upheaval — is practically an advertisement for DGI’s appeal. 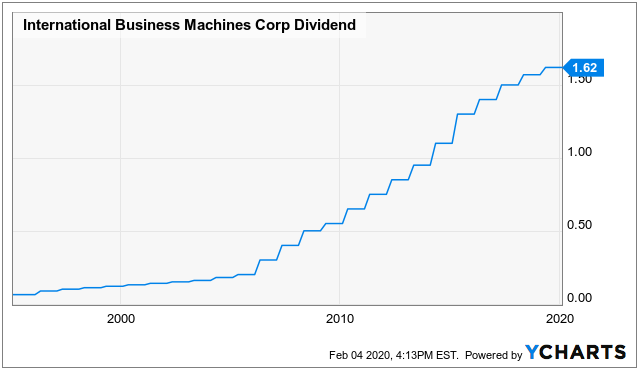 Assuming IBM raises its dividend as expected this spring, it will become a Dividend Aristocrat, joining a select group of companies that have grown their payouts annually for at least 25 consecutive years.

Overall, IBM’s dividend looks safer than the average company’s and, as best as we can tell today, appears to be a reliable source of income.

IBM’s dividend yield is 4.35%, quite robust for a technology company.

Despite the warning I issued earlier about putting too much faith in a chief executive, outstanding CEOs can and do lift companies to great heights.

What if Krishna doesn’t turn out to be the next Nadella, the next superstar CEO?

Well, at the very least, the Income Builder Portfolio will have a piece of a blue-chip, money-making, dividend-growing operation — one that, unlike the example I gave at the top of this article, is not a year away from going out of business.

My next article, scheduled to be published on Friday, Feb. 7, will chronicle our IBM purchase and discuss valuation in detail.

As always, investors are urged to conduct their own thorough due diligence before buying any stock.