I grew up in Western New York, just north of Buffalo. National Fuel Gas (NFG) was our natural gas provider. I can still remember the paper bills sitting on my parents’ kitchen counter.

In those days, we paid our utility bills at the drugstore! How times have changed.

Today, decades later, National Fuel Gas is a diversified energy company, with segments in exploration and production; pipeline and storage; gathering; and utility. The utility segment is what supplied natural gas to our neighborhood back in the fifties and still does today.

NFG was founded in 1902, and it is headquartered in Williamsville, NY.

National Fuel Gas is a high-yield, mid-growth company. Normally a dividend growing at 2%-3% per year would be called slow-growth, but I use a sliding scale that tempers growth expectations for high-yield securities.

In my book, 4.1% is a high yield for a dividend-growth company, so NFG’s 2.4% dividend growth rate is just fine.

It qualifies as a Dividend Champion, having passed that milestone 24 years ago.

It would qualify as a Dividend Aristocrat if NFG were in the S&P 500 Index.

Later this year, upon the announcement of its 50th straight dividend increase, National Fuel Gas will advance into the next category: Dividend King.

The very high safety score from Simply Safe Dividends, based on their thorough analysis of factors that impact dividend sustainability, suggests that NFG’s dividend is safe and unlikely to be cut. That makes me confident that the company will make its 50th consecutive annual increase later this year.

The dividend record for NFG paints a beautiful picture. 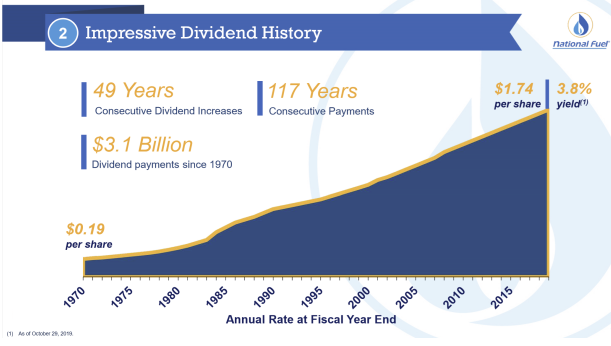 National Fuel Gas, incorporated in 1902, is a holding company for several subsidiaries that, taken together, form an integrated energy company. The company has operations along every point in the energy supply chain.

This map shows the company’s assets and operations. 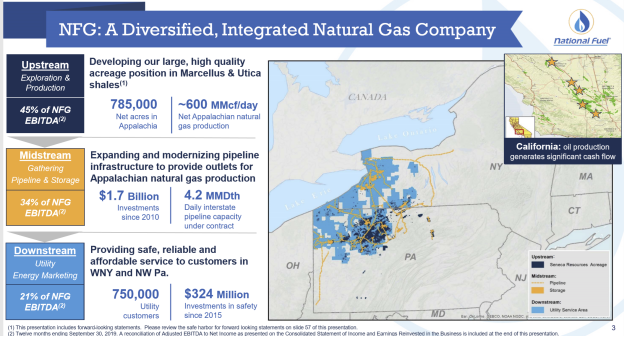 At the upstream end, NFG owns and operates a mix of natural gas assets located in the heart of the Appalachian basin, shown in dark blue on the map. These assets are supplemented by oil production assets in California, shown in the inset.

NFG reports financial results for four business segments whose operations are carried out by NFG’s wholly-owned subsidiaries. The percentages show the contribution of each segment to NFG’s earnings.

NFG is somewhat unique in that it combines upstream, midstream, and downstream/utility assets and operations under one roof. So the company is not a pure play in any segment; rather it is an integrated investment in the energy sector.

At National Fuel Gas, keeping operations conservative is management’s basic DNA….While others fell prey to Wall Street’s push to divest regulated utility and midstream assets during the boom times earlier in the decade, NFG stayed united and integrated. The result is solid 1.8 times coverage of the still-growing dividend over the past 12 months, along with a BBB [investment-grade] credit rating and stable outlook….Management also continues to boost the balance sheet with opportunistic debt retirement and refinancing, slashing interest expense by 10.3 percent in the last 12 months….The big difference between National Fuel Gas and other energy companies is its unique business model has repeatedly proven its resiliency in tough times. Management has also locked in prices for 87 percent of its expected FY2020 output, meaning stable earnings even if gas prices should fall further. (Source)

Morningstar awards NFG a narrow moat. In NFG’s case, this is an algorithmically generated rating, based on comparisons to characteristics of other companies, as NFG is not currently covered by a Morningstar analyst.

You will notice that my B+ quality grade is higher than a mere average of the other grades. That’s because I’m seeing NFG through the lens of a dividend growth investor, so solidity and repeatability count heavily for me. I am just as impressed by those qualities as many other investors would be by sheer growth.

Value Line gives National Fuel Gas a lowish Financial Strength grade of B+, which is only their 5th-highest grading level. Let’s look under the hood at NFG’s key financial categories to see whether we agree.

With the exception of a couple of outlier years, reflecting the severe drop in oil and gas prices in 2015, NFG’s ROE has generally beeen in the average range. Here is how oil prices dropped from mid-2014 to the end of 2015 (Source). 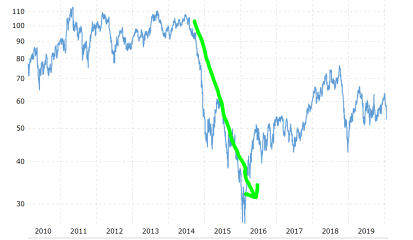 Debt-to-Capital (D/C) ratio measures how much a company depends on borrowed money. Companies finance their operations through a mixture of debt and equity (shares issued to the open market) in addition to their own cash flows.

A typical D/C ratio for a large, healthy company is 50%. D/C is a measure of financial risk. All else equal, stocks with high D/C ratios are riskier than those with low D/C ratios. Energy companies tend to carry high debt loads, because of the capital-intensive nature of the exploration, production, and pipeline segments that require large investments in long-term structural projects.

Given the capital requirements of its business, NFG’s debt level is actually pretty low. Its debt rose up toward the 50% mark 2015-2015, but it has been dropping back down since then.

As noted earlier, NFG has an investment-grade credit rating.

NFG’s profit margin is very good, with no year in the past 10 years under 25%.

NFG’s official profits present a positive picture, with the exception of the two negative years (2015 and 2016) impacted by the plunge in oil prices. Oil and gas prices are always a risk to the profitablity of energy companies.

Free Cash Flow (FCF) is the money left over after a company pays its operating expenses and capital expenditures. Whereas EPS is subject to GAAP accounting rules, cash flow is a more direct measure of money flowing through the company. It’s the cash a company has available for dividends, stock buybacks, and debt repayment.

In the utilities and energy sector, FCF is not as significant an indicator as in other sectors. The capital-intensiveness of their investments, with long payback periods, distorts the usual meaning of FCF. Indeed, free cash flow is usually low or negative in energy companies. However, the capital projects are often guaranteed a positive rate of return by regulators, and historically, NFG’s regulatory environment has been supportive of the company’s results.

For those reasons, I do not attach much significance to NFG’s spotty FCF numbers.

I normally like declining share counts, because the annual dividend pool is spread across fewer shares each year. That makes it easier for a company to maintain and increase its dividend. By buying back its own shares, the company is essentially investing in itself, expanding each remaining share into a larger piece of the pie, and improving all per-share statistics.

In that light, I consider NFG’s flat share count record to be fine. Despite its investment requirements, NFG has not overloaded on debt nor issued massive numbers of new shares. That suggests good financial discipline. 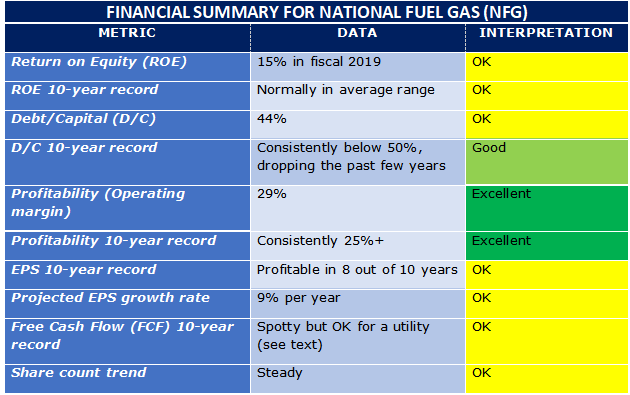 I think that Value Line’s 5th-level financial rating for NFG is too low. I find it impressive how NFG has held the line on both debt and new-share issuance in its capital-intensive industry. On a simple A-F scale, I would give the company a B for its finances.

I use four different valuation models, then average them out.

The basic model uses a price-to-earnings (P/E) ratio of 15, which is the historical long-term P/E of the stock market, to create a fair-value reference line.

In the following chart, the fair-value reference line is orange, and the black line is NFG’s actual price. I highlight both NFG’s current P/E ratio and the reference ratio of 15 used to draw the orange line. 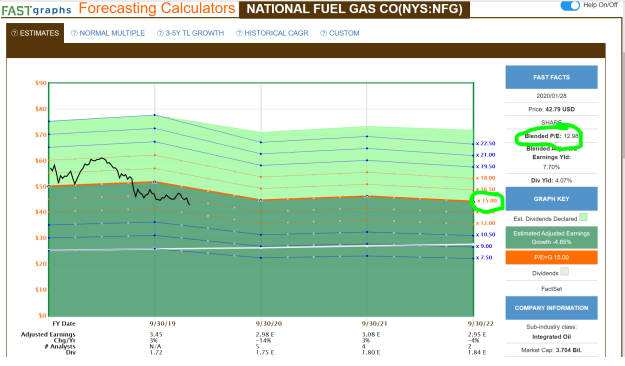 Since the black price line is beneath the orange fair-value reference line, NFG is undervalued according to this model.

To calculate the degree of undervaluation, we make a ratio out of the P/Es.

That suggests that NFG is undervalued by 13%.

We calculate the stock’s fair price by dividing the actual price by the valuation ratio. That gives us $43 / 0.87 = $49 for a fair price.

Remember, valuation is an estimate or assessment, not a physical trait like length or width. We are making a judgement. That’s why I use several models.

Model 2: FASTGraphs Normalized. In the second valuation model, we compare National Fuel’s current P/E to its own long-term average P/E. 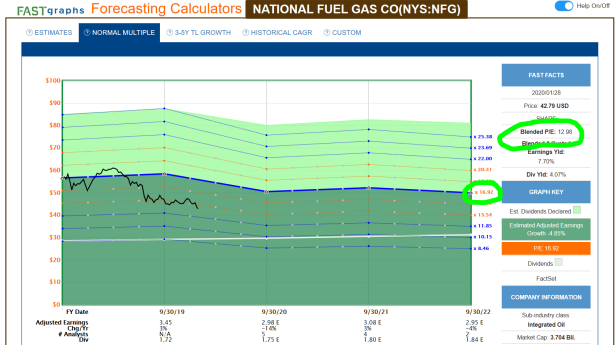 The reference line is now blue, and it is drawn at NFG’s 5-year average P/E ratio of 16.9.

Once again, the black price line is below the fair-value reference line, suggesting that NFG is underalued.

The formulas to determine the degree of undervaluation are the same as in the first step:

Step 3: Morningstar Star Rating. Morningstar takes a different approach to valuation. They ignore P/E ratios and instead use a discounted cash flow (DCF) model for valuation. The DCF model is based on the idea that a company is worth all of its future cash flows, discounted back to the present to reflect the time value of money.

Obviously, no one actually knows a company’s future cash flows. Estimates must be used. My experience with Morningstar is that they have a careful, comprehensive, and conservative process for determining the inputs that they use in their DCF formulas.

Morningstar gives NFG 4 out of 5 stars, meaning that they consider the company to be undervalued. Specifically, they find NFG to be 17% undervalued, with a fair price of $51. 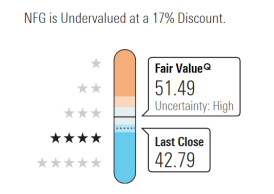 Step 4: Current Yield vs. Historical Yield. My last model compares the stock’s current yield to its historical yield. This way of estimating fair value is based on the idea that if a stock’s yield is higher than usual, it may indicate that its price is undervalued. 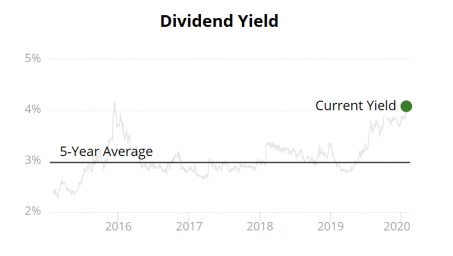 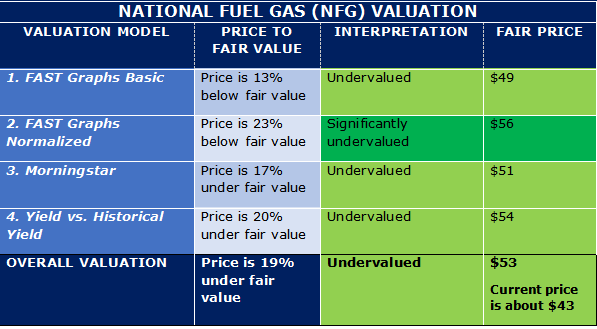 All four models concur that National Fuel Gas is undervalued. The average of the four fair prices is $53 compared to NFG’s actual price of about $43.

NFG’s 5-year beta is 0.8, which means its volatility has been, on average, 20% less than the market’s. This is a positive factor.

In their most recent report on National Fuel Gas, CFRA gathered the recommendations of 7 analysts covering the stock. Their average recommendation is 3.0 on a 5-point scale, where 3 = hold. This is a neutral factor.

In my opinion, at its current pricing, National Fuel Gas is an attractive opportunity to obtain a solid, investment-grade company, with a good 4.1% yield, 49-year record of increasing its dividend every year, and high dividend safety.

For further reading, I suggest this article on Daily Trade Alert: These 7 Energy Stocks are Ready to Run (Louis Navellier, May 2019). Also, NFG is the Top Pick for 2020 by well-respected utility expert Roger Conrad.

Nothing in this article is intended to be investment advice. This is not a recommendation to buy, hold, or sell National Fuel Gas. Always do your own due diligence. Think not only about the company’s quality, yield, dividend growth outlook, and business prospects, but also about how it fits your personal financial goals and fits in with other stocks that you already own.