Given the way financial-sector companies tend to perform during recessions — hint: not so hot — how many financial stocks are too many for a portfolio?

Obviously, it depends upon whom one asks. Some investors want none, but the world’s most renowned investor, Warren Buffett, loves them — especially bank stocks.

I’m more of a worrywart, I guess, because I’m a lot less inclined to go all-in on the sector as I gradually put together DTA’s Income Builder Portfolio during this bull market.

Nevertheless, we did add Wells Fargo to the mix on Tuesday, Jan. 28, when I executed a purchase order on Daily Trade Alert’s behalf for 21 shares at $47.47 apiece.

(As sometimes happens with limit orders, the acquisition was filled in 2 transactions, seconds apart.)

The purchase gives the IBP stakes in three companies within the sector — Wells Fargo and JPMorgan Chase, as well as BlackRock (BLK), the world’s largest asset manager — but financials still make up a relatively small percentage of the portfolio.

Heck, they’re not even worthy of their own slice in the following pie graph!

Buffett and I might disagree on the amount of financial holdings with which we’re comfortable, but we do both like companies that pay, and grow, their dividends.

As I explained in my previous article, buying shares of a company that is trying to regain trust after years of scandal does carry some added risk. Wells Fargo’s generous dividend helps sooth the nerves.

That will be automatically reinvested right back into WFC, as mandated by our Business Plan, purchasing about .22 of a share more.

Then, come June, our approximate 21.22-share position will produce $10.82 in income, which again will be reinvested.

If Wells Fargo sticks to its recent pattern, it will raise the dividend for its Sept. 1 payment.

Conservatively estimating a 4% hike to .53, that would bring the quarterly payout to $11.36, resulting in still more WFC shares coming into the IBP.

Analysts are supposed to be forward-looking folks, but they often are swayed by a stock’s past and the momentum they believe does or doesn’t exist.

Wells Fargo has struggled to move the needle on its price in the 3-plus years since word of the scandal broke, so analysts generally are unexcited about the company.

The following Thomson Reuters survey indicates that most consider it a “Hold,” but there actually are more “Reduce” or “Sell” ratings than there are “Strong Buy” or “Buy” ratings.

Baird analyst David George did just upgrade WFC from “Underperform” to “Neutral,” and established a price target of $50.

Some others have an even more favorable projection for the company, including Schwab, Argus and Columbine Capital. 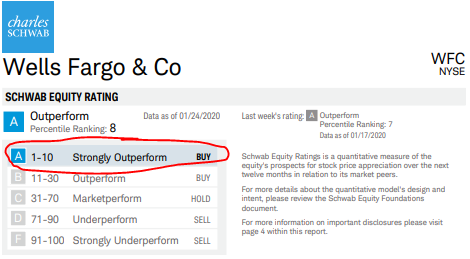 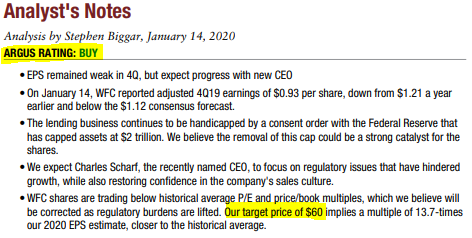 Projecting 3-5 year price appreciation of up to 70%, Value Line has put Wells Fargo on its list of “Income Stocks with Worthwhile Total Return Potential.” 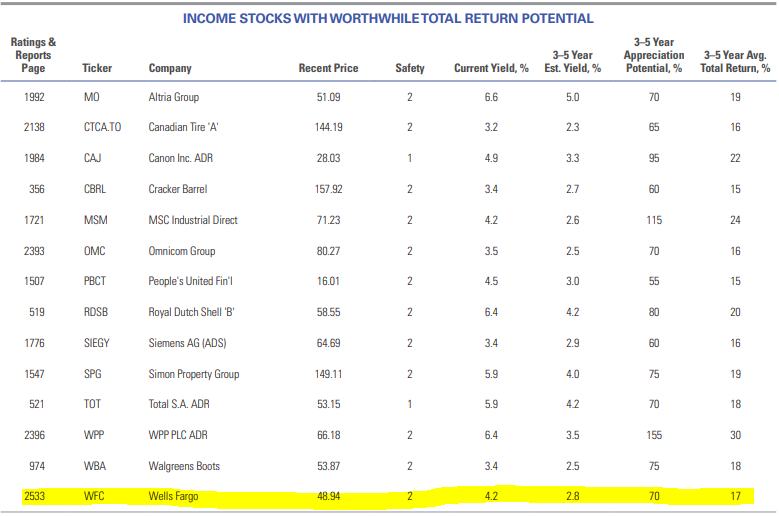 Morningstar Investment Research Center, which includes Wells Fargo in its “Dividend Select Portfolio,” says a fair price to pay for WFC shares is $56. 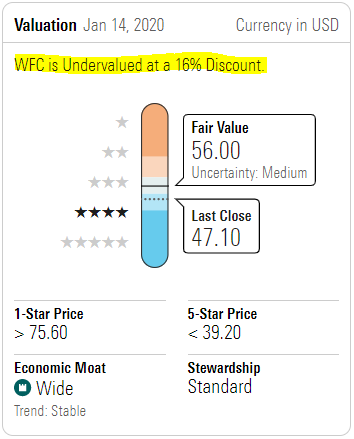 Simply Safe Dividends points out that WFC’s 4.3% yield is significantly higher than its 5-year average, which often is considered a sign of undervaluation. 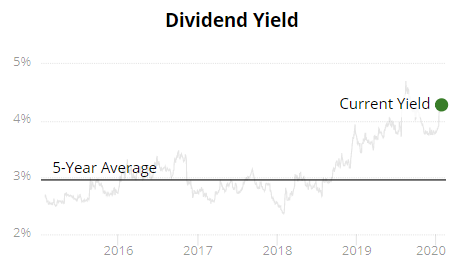 With a blended P/E ratio of 11.62, FAST Graphs indicates that Wells Fargo is slightly undervalued to fairly valued. WFC’s blended adjusted earnings yield is an attractive 8.61%. 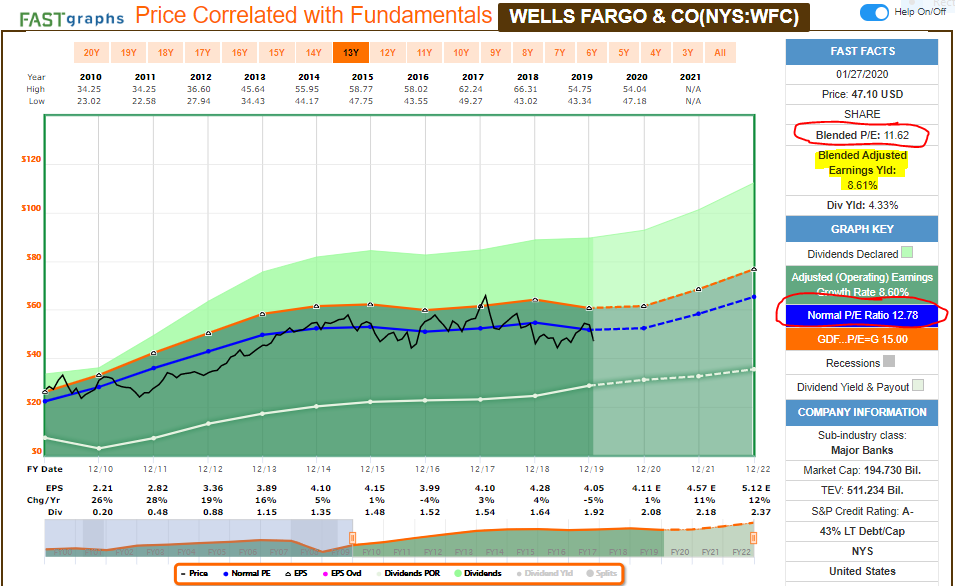 This just in: I’m no Warren Buffett. Not only does he like banks more than I do, his net worth is at least twice as high as mine.

Though I doubt financials will ever make up anywhere near as large a percentage of the IBP as they do Berkshire Hathaway’s holdings, I am comfortable with the Income Builder Portfolio owning a few.

We already have bought BlackRock twice, and I could see adding to our Wells Fargo and JPMorgan positions. Beyond that, we’ll see on a case-by-case basis.

And once the IBP is worth a few billion bucks like Berkshire is, anything goes!