Guys, I’m about to risk about a thousand of your hard-earned bucks!

Of course, most investments carry a degree of risk, and certainly all stocks do.

A recession could start any time, crashing the price of just about every equity out there.

Trade wars, actual wars, interest rates, election results, litigation, legislation … all of this stuff could negatively affect stocks (and has in recent years).

Just last week, the market took a hit due to the killer coronavirus spreading throughout China.

What I’m specifically talking about here, however, is the risk an investor takes when he or she buys a stake in a company that has been Trouble with a capital T, a business that might yet experience more pain before it sees much gain.

So, what is this super-risky risk I’m taking with this particular $1,000 (the amount DTA has allocated for each of my 24 annual selections)?

Shares of a new venture that makes propeller-topped beanies for helicopter parents? 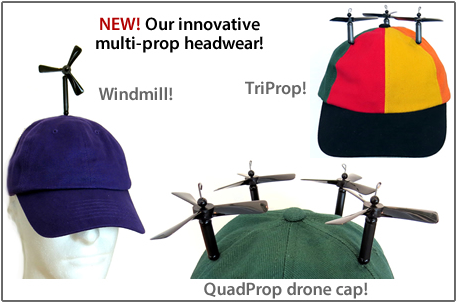 An IPO for a company that markets beer-flavored kale (the only way I’d eat it)? A stake in a corporation that insists it can bring newspapers back to their heyday?

Nope … just Wells Fargo (WFC), the fourth-largest bank in the United States, and 13th-largest in the world. 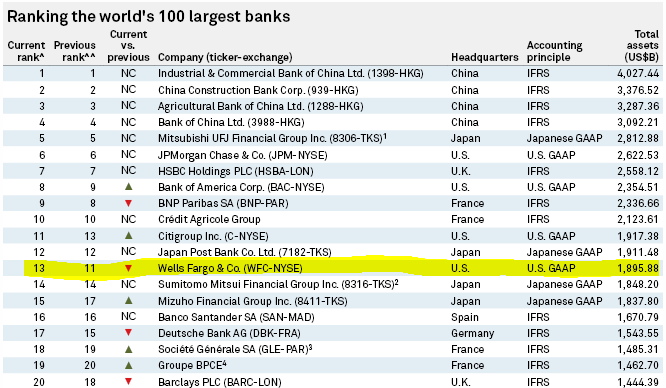 WFC will become the Income Builder Portfolio’s 30th holding on Tuesday, Jan. 28, when I execute a purchase order on DTA’s behalf.

Why is the stock so risky, and how risky is it?

Actually, while I do believe that Wells Fargo carries more risk than some other potential investments, I might have been overstating things a tiny bit so far in this article. Nothing wrong with a little hyperbole between friends, right?

Like all other major banks, Wells Fargo was hit hard by the Great Recession. 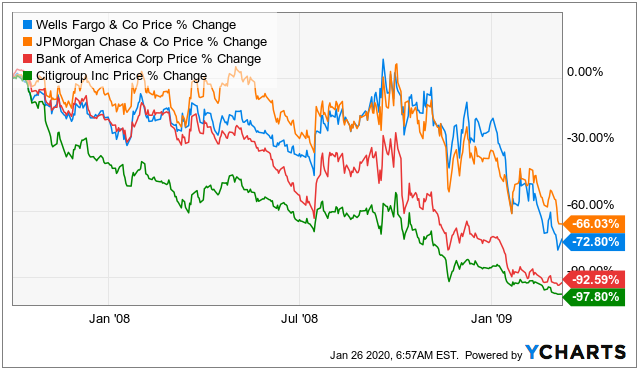 Each recovered strongly after the recession, with Wells Fargo leading the way over the next seven years. 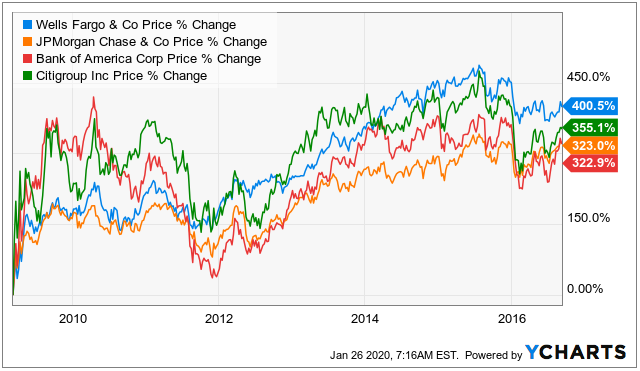 Then, on Sept. 8, 2016, it was disclosed that Wells had been opening accounts under the names of millions of customers without their knowledge — leading to a fine of $185 million, the banishment of CEO John Stumpf, and more than 5,000 employees losing their jobs.

Numerous shocking revelations have followed, underscoring the depth of the corporation’s toxic culture. 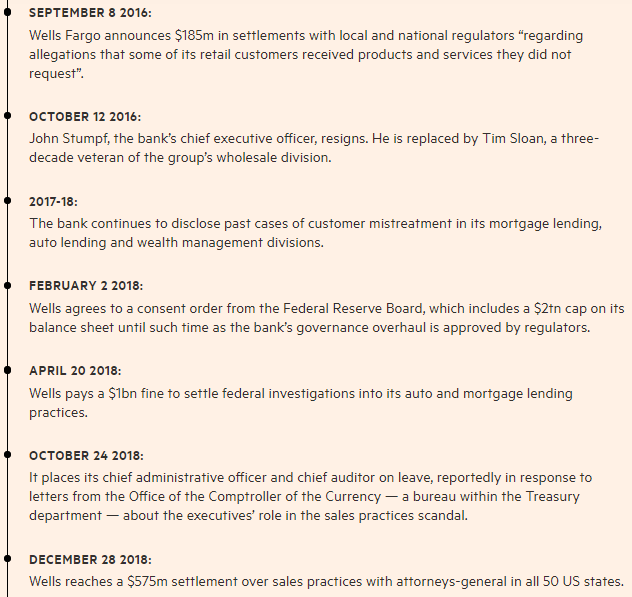 Ugh … I get a headache just looking at that timeline.

The scandal resulted in the ousting of two CEOs — Stumpf and his successor, Tim Sloan, who resigned in March 2019. The new guy in charge is Charlie Scharf, a former CEO at Bank of New York Mellon (BK) and Visa (V), and a protege of respected JPMorgan Chase (JPM) CEO Jamie Dimon.

On Jan. 14, Scharf made his public debut by presiding over WFC’s fourth-quarter 2019 earnings call, stating:

Wells Fargo is a wonderful and important franchise that has made some serious mistakes, and my mandate is to make the fundamental changes necessary to regain the full trust and respect of all stakeholders.

Scharf has his work cut out for him, as earnings continue to be impacted by fines, lawsuits, settlements and other hangovers from the scandal. 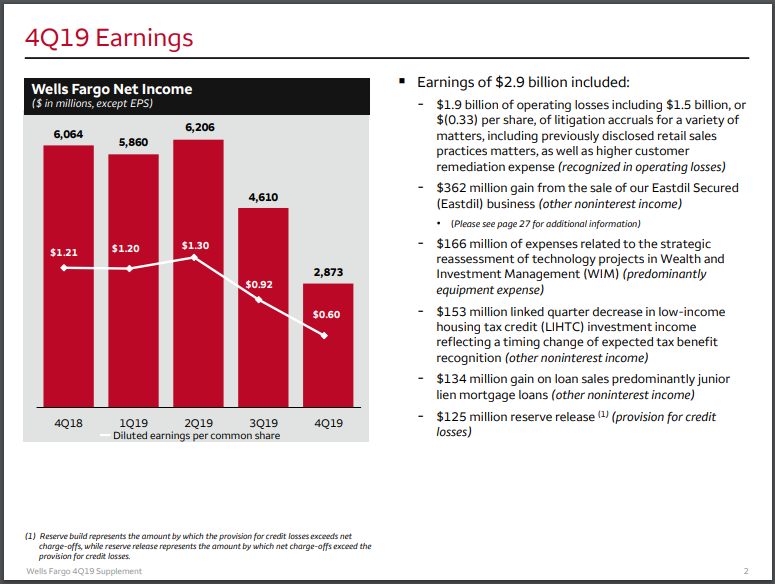 Last week, Stumpf and other former Wells Fargo executives were fined $59 million by the U.S. Office of the Comptroller of the Currency, leading Scharf to write a letter to current bank employees in which he said:

The OCC’s actions are consistent with my belief that we should hold ourselves and individuals accountable. They also are consistent with our belief that significant parts of the operating model of our Community Bank were flawed. At the time of the sales practices issues, the Company did not have in place the appropriate people, structure, processes, controls, or culture to prevent the inappropriate conduct. This was inexcusable. Our customers and you all deserved more from the leadership of this Company.

And yet, knowing all of this, I have selected Wells Fargo for the Income Builder Portfolio.

When I told my wife about my choice, she said: “Really? I can’t believe they still have any customers! If I were a customer there and I found out they had opened millions of fake accounts, I would have run away faster than Usain Bolt!”

I couldn’t argue with her logic, but I could state this fact: While some customers obviously did bolt, most stayed.

As the graphic earlier in the article shows, the bank still has nearly $2 trillion in assets under its umbrella. Wells Fargo also scores quite well in “quality metrics.”

Over the years, some of the best investments have been those made in historically strong companies whose share prices have been beaten down by an extended period of scandal and/or mismanagement.

Recent examples include Target (TGT) and McDonald’s (MCD), both of which had major turnarounds after bringing in CEOs who made significant changes to their business models. And while Microsoft (MSFT) was making money under its previous chief executive, it wasn’t until Satya Nadella was promoted in 2014 that profits — and the stock price — began to take off.

So a purchase of WFC is at least partly a bet on Charlie Scharf, who said during the earnings call:

Our cost structure is too high, and I believe there are many areas where we will be able to increase our rate of growth. … Even in my short time at the company, it is clear that our opportunities to improve our performance are substantial when we finish this work.

I almost chose to add to the IBP’s stake in JPMorgan Chase, which I consider the highest-quality name in the industry, but I instead decided to make a value play on a downtrodden company.

The following FAST Graphs illustration shows projections for WFC to have double-digit earnings growth in 2021 and 2022. 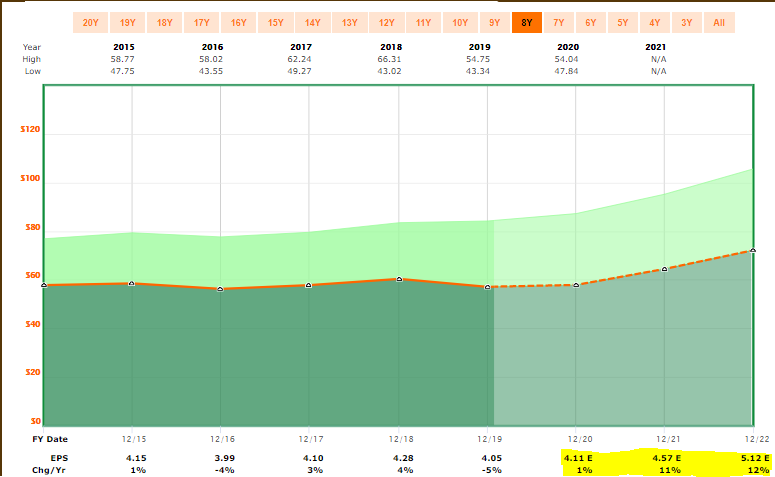 While applauding the hiring of Scharf, Morningstar issued a word of caution: “We think it is clear that Wells is still a work in progress, and that progress will takes years, not months.”

Getting Paid To Wait

Wells Fargo has increased its dividend annually since the recession ended.

The company substantially slowed the growth of its payout in the immediate aftermath of the scandal, but it gave shareholders a 10.3% hike in mid-2018, and it raised the dividend twice more last year by a total of 18.6%.

The combination of those increases and the languishing stock price have pushed WFC’s yield to 4.3%, its highest since the recession.

In addition, the company continues to make billions of dollars in share repurchases, taking advantage of the low price and significantly reducing the number of shares outstanding. My DTA colleague, Jason Fieber, discussed those buybacks (and more) in his September article — HERE.

Since the Income Builder Portfolio debuted two years ago, I have preached the importance of quality. So some might be a little surprised that I opted for WFC over JPM or another seemingly “safer” investment.

However, within a diversified and growing portfolio, I do believe there is room for calculated speculation in a company that shows potential for significant improvement.

Besides … it ain’t my money!

Just kidding, Greg and Dave. I always treat my IBP choices as if I’m making them for myself, and I do believe that Wells Fargo will turn out to be a solid, dividend-growing investment for years to come.