That seems like such a simple concept, but it really isn’t.

If a company in my portfolio excels, I admit I might become attached to it — as if its past performance guarantees future excellence.

As I have gained experience, I have become better at fighting that impulse … but hey, I’m human, too.

All of that entered my mind as I contemplated my first selection of 2020 for DTA’s Income Builder Portfolio.

And yes, I chose a company that has, to date, exceeded my expectations: semiconductor maker Broadcom (AVGO).

Come Tuesday, Jan. 14, I will execute a purchase order on Daily Trade Alert’s behalf for about $1,000 worth of AVGO.

Since we added Broadcom to the IBP on Aug. 14, 2018, its total return has been significantly better than a same-sized, same-date investment in the SPDR S&P 500 Trust ETF (SPY) would have been.

So indeed, our AVGO stake has had the kind of performance that would make any investor “like” the stock.

That, however, isn’t the reason I have decided to add to the IBP’s Broadcom position.

Under CEO Hock Tan, Broadcom has continued being what Morningstar calls “a serial acquirer.” Among the acquisitions: LSI, PLX Technology, Emulex, Broadcom (which merged with Avago), Brocade, CA Technologies, and most recently, Symantec’s enterprise security business.

As a result, Broadcom’s tentacles spread far and wide. 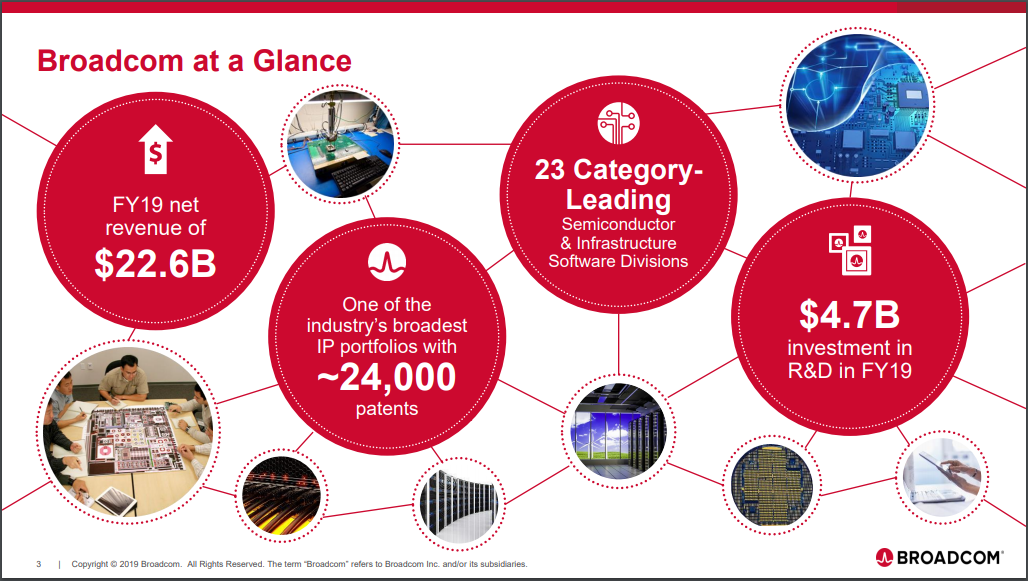 If you really want to be impressed, just look at this partial list of companies that Broadcom counts as customers:

Is there any wonder why Broadcom has been a cash-generating machine for years?

The following FAST Graphs image illustrates the company’s outstanding growth in free cash flow; the yellow-highlighted area shows that, after a relative pause in 2020, FCF again is expected to surge in ’21. 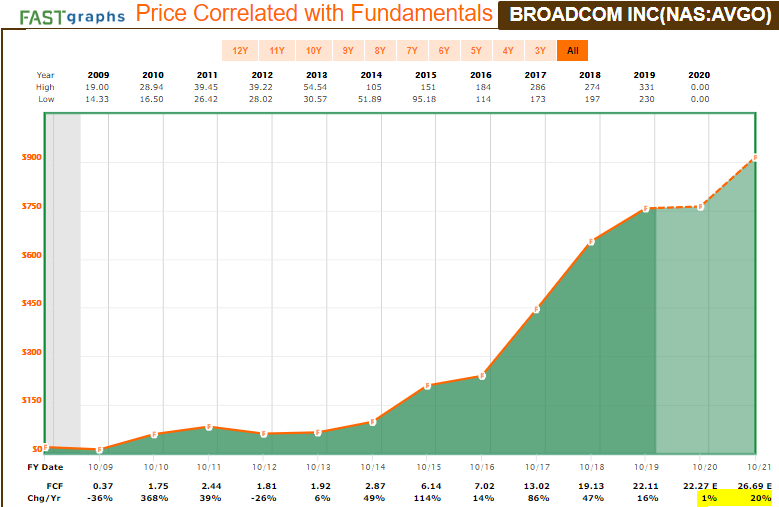 Similarly, AVGO’s earnings have gone mostly one direction for more than a decade, as indicated by the FAST Graphs image below.

The trend is expected to continue well into the next decade, even if the growth probably won’t be quite as spectacular. 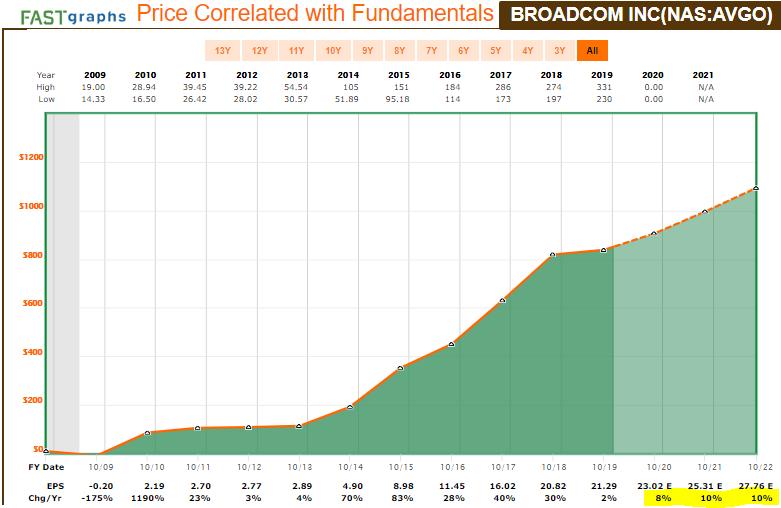 Broadcom’s debt level has moved higher as it has borrowed to acquire other businesses, leading Standard & Poor’s to give AVGO only a BBB- credit rating — the lowest score a company can receive for its bonds still to be considered “investment grade.”

The semiconductor industry is cyclical, AVGO faces exposure to macroeconomic situations such as the trade war with China, and the company derives a high percentage of its revenue from just one business (smartphones).

So this is hardly a risk-free enterprise, a fact reflected in it receiving middling scores from Value Line for Safety (3) and Financial Strength (B++).

Even though I consider Broadcom to be a quality operation, I do view it as one of the IBP’s more speculative investments. I am comfortable owning it within a diversified group of stocks that includes many more conservative names, but I wouldn’t want AVGO to make up too large a percentage of any portfolio. 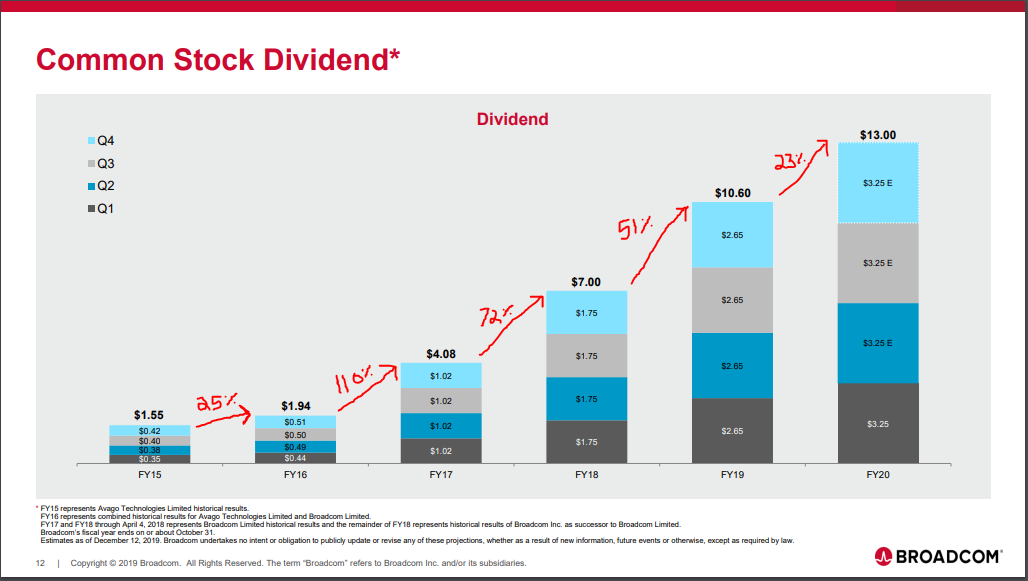 As the above graphic shows, AVGO has increased its annual dividend from $1.55 to $13 in just the last 5 years.

Broadcom’s 4.3% yield is among the highest in the technology sector, and the company has been a major contributor to the IBP’s surging income stream.

Of the Income Builder Portfolio’s 29 holdings, Broadcom is one of only 10 that has not been bought a second time — a situation that will be rectified Tuesday.

I already have talked about many reasons why I “like” … wait … let me rephrase that … why I want more AVGO in the IBP.

Here’s another: Even though it is priced at approximately $300 per share — nearly $100 more than we paid for our initial stake 17 months ago — Broadcom still appears reasonably valued, trading at about 13 times projected forward earnings.

We will go into much more detail about Broadcom’s valuation in our post-buy article, which is scheduled to be published on Wednesday, Jan. 15.