With both eye-popping income production and market-crushing total return, our real-money, real-time endeavor has plenty of reasons to party hardy.

Having used Dividend Growth Investing as our primary strategy, outstanding income advancement practically was a given. But even I am a little surprised that the IBP has so thoroughly outperformed the overall market.

More on total return in a bit. After all, this portfolio has “income” right in its name, so let’s get right to that.

Twelve months ago, I used an elaborate system to illustrate how effectively the IBP had grown dividends in its first year of existence.

I calculated what each position’s income production would have been in 2017 had the portfolio owned the same number of shares of each company for the same period of time.

I then compared that to the actual income each holding brought into the portfolio in 2018.

The end result was an impressive (albeit purely hypothetical) 15.6% increase in the income stream.

It was a reasonable attempt to make an apple-to-apples comparison, but I simply can’t keep doing it year after year. As the portfolio grows and the years roll by, it would be too difficult, and the potential for mathematical errors would be too great.

So now is as good a time as any to let the actual income data speak for itself.

The following table shows the amount of income each IBP position produced in 2019 compared to how much each brought into the portfolio in 2018. 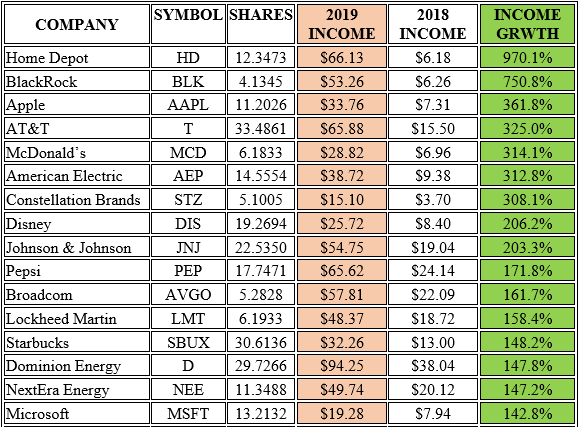 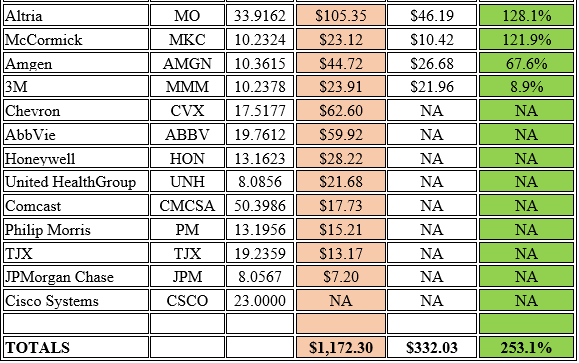 How is that even possible? Well, the IBP is a living, active, real-money endeavor.

Unlike my colleague Dave Van Knapp’s wonderful Dividend Growth Portfolio, in which there have been no new contributions since its inception in 2008, about $2,000 in new money gets invested into the IBP every month.

During 2019 (as in the previous year), Daily Trade Alert allocated about $24,000 for me to make twice-monthly stock buys on its behalf (as detailed on our site’s IBP page). In addition, all dividends continued to be reinvested.

Eight companies that weren’t in the portfolio in 2018 were there by the end of ’19. On 10 occasions, I selected a company for a second time. One, Johnson & Johnson, has been built up via 3 separate buys and 7 dividend reinvestments. 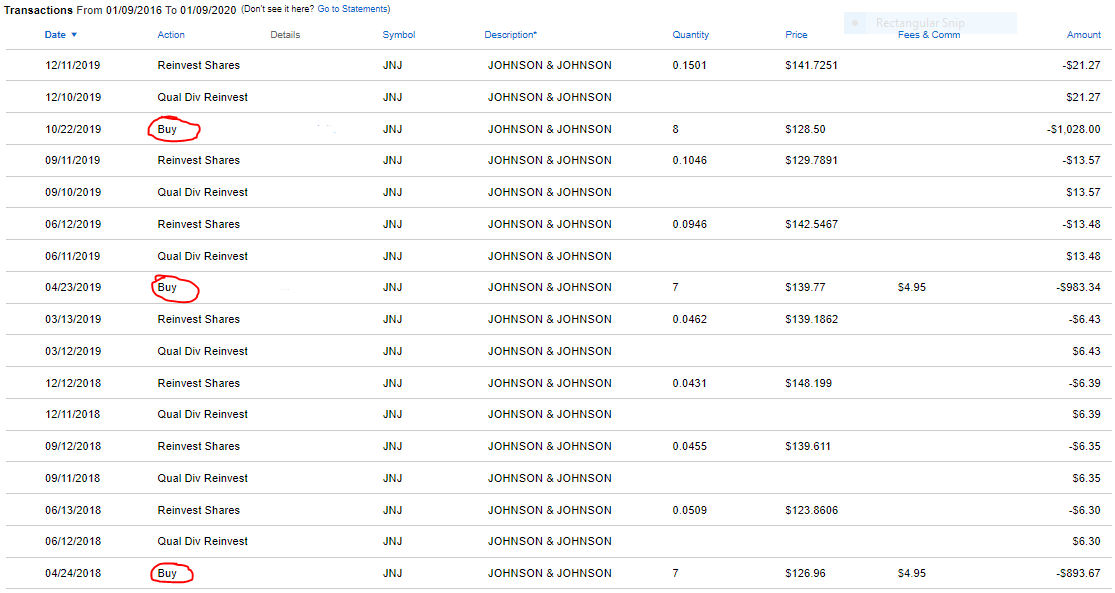 The IBP has more holdings now than it did a year ago (29, compared to 21), and there are more shares (in many cases, significantly more shares) of every company that already had been in the portfolio in 2018.

Given all of that, it would have been surprising only if income production hadn’t skyrocketed.

If the table above is apples-to-kumquats, I can live with that. I still think it illustrates something pretty important:

For 7 IBP components, I am able to make true year-over-year comparisons because they were bought in 2018 but not purchased again in 2019.

The COMP DIVS column reflects the number of comparable dividend payments each year for each company.

Led by Broadcom, which had raised its dividend twice — totaling 86% — since we bought it for the IBP in August 2018 (graphic below), those 7 companies produced 16.3% more income in a similar time span of 2019 than they did the previous year.

We recently made a second 3M purchase – our final buy of 2019 – but it wasn’t done in time for the new shares to receive dividends in ‘19. That means MMM was the only IBP position to have received 4 quarterly payments each year based upon the original stake (in MMM’s case, 4 shares); it produced about 9% more income in 2019.

Here is another table with more income-related information as the calendar flipped from 2019 to 2020: 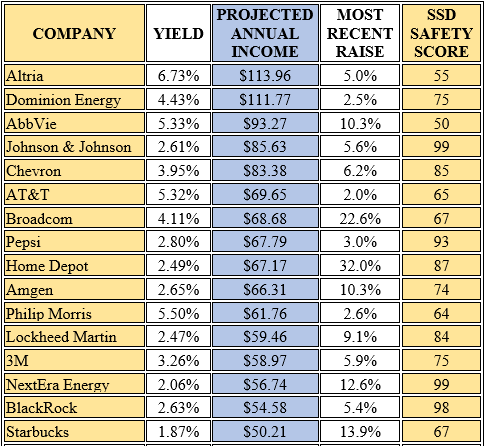 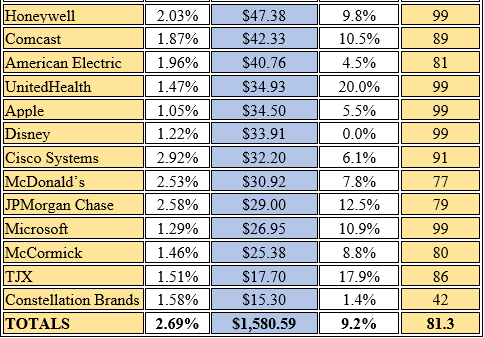 PROJECTED ANNUAL INCOME shows the yearly income expected for each position given the latest announced dividend. For example, Dominion announced in December that it would be raising its annual payout from $3.67 to $3.76, with the first quarterly dividend of .94/share payable in March.

Even though the 2.5% increase hasn’t been formally declared by the board, and exact ex-dividend and payment dates have not been determined, that’s a mere formality. So I included it in the MOST RECENT RAISE column, and I multiplied the $3.76 annual dividend times our 29.7266-share stake to arrive at the $111.77 total shown in the PROJECTED ANNUAL INCOME column.

The last column of the table above shows the Dividend Safety Score assigned by Simply Safe Dividends, which uses numerous metrics to determine how likely each company is to avoid having to reduce its distribution to shareholders.

Our portfolio has an 81.3 Dividend Safety Score — pretty darn good.

The YIELD column shows the dividend yield through market close Dec. 31, 2019. That 2.69% figure is above the rate of inflation, higher than the yield of most index funds, and greater than the yield I was counting on when determining the IBP’s Income Target as stated in our Business Plan:

Build a portfolio that will produce at least $5,000 in annual dividends within 7 years of the IBP’s inception.

Using the assumptions of 2.5% yield and 5% annual dividend growth, I expected the projected annual income after 2 full years to be $1,245. 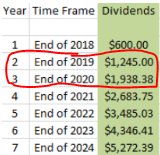 Although building an enduring, growing income stream is the IBP’s main mission, we also expect solid total return thanks to the high-quality companies we are selecting.

So far, so much more than just “solid”! The following table shows that the IBP continues to strongly outperform a leading proxy for the overall market, the SPDR S&P 500 Trust ETF (SPY). (All data is as of market close on Dec. 31, 2019). 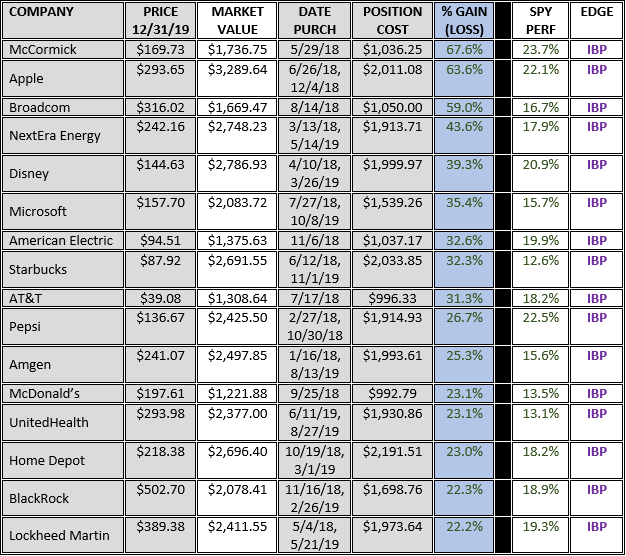 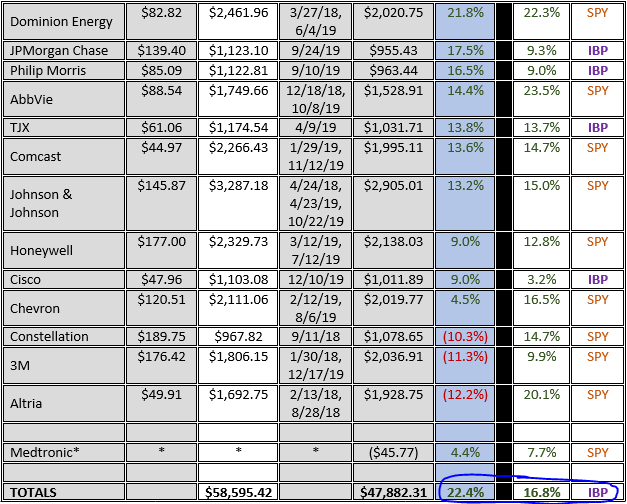 As for the methodology used in creating the table above …

I utilized the Dividend Channel calculator to obtain the performance of SPY from the date of each IBP purchase through the end of 2019; and I used the actual value of each IBP position at market close Dec. 31, 2019, as shown on our year-ending brokerage statement.

Sharp-eyed readers might have noticed a slight discrepancy between what the Dividend Channel shows for T’s total return (32.8%) and what our T position in the IBP actually gained (31.3%). That’s because Dividend Channel uses data from each day’s close of trading, while I bought T (and every other IBP position) during the trading day.

For positions built on two or more dates, I calculated what SPY’s return would have been on each date investing the exact same amount of money.

Not too shabby for SPY … but well short of the IBP’s spectacular 22.4% return!

A few other total-return notes: 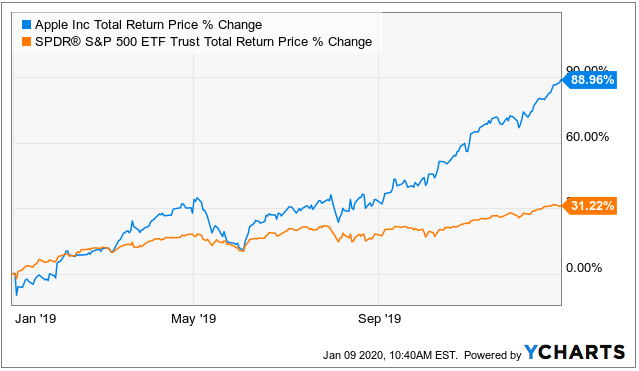 Even Constellation, one of the portfolio’s only three losers, was up 20% last year.

I strongly believe in diversification, so I like that the IBP has components from 9 of the 11 major sectors.

Two years into what we hope will be a decade-long (or longer!) project, we are delighted with the way the Income Builder Portfolio has worked out.

Stupendous income growth and market-thrashing total return … I mean, what more could anybody ask for?

Happy 2nd Birthday, IBP, and many happy returns to come!