Defense companies are on everyone’s mind lately, what with the news from the Iran, Iraq, and the White House.

GD is a global aerospace and defense enterprise.

General Dynamics was incorporated in 1952. From that date into the 1990s, GD provided tanks, rockets, missiles, submarines, warships, fighters, and electronics to all of the military services.

In the early 1990s, GD sold most of its portfolio, hanging on to just its military-vehicle and submarine businesses.

Those form the foundation of GD today. Ranked by revenues, General Dynamics is the 5th-largest aerospace/defense company, just below Lockheed Martin (source).

General Dynamics is one grade short of perfection in this Quality Snapshot. On a 0-to-5-point scale for each metric, the company would score 24 out of 25 points. Only a small number of companies score that high.

General Dynamics’ dividend yield is 2.3%, which is lower than we normally write about in the Valuation Zone, although it is higher than the S&P 500’s yield, which is 1.8%. I call yields between 2% and 4% “mid-yield.”

For stocks with yields in the 2%-4% range, I call that “fast” dividend growth. So for classification purposes, GD is a mid-yield-fast-growth stock. 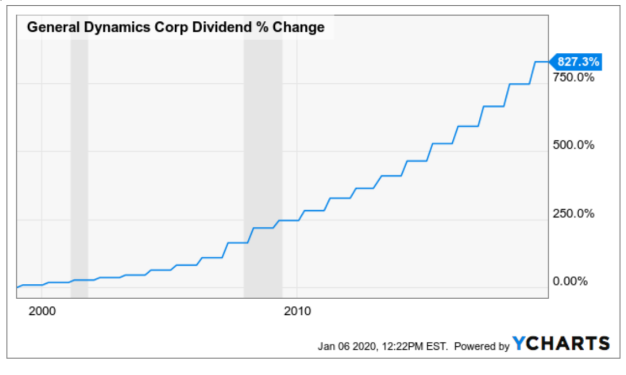 General Dynamics in the Valuation Zone

Now that we know that General Dynamics is a high-quality dividend-growth company, let’s see whether it presents a good investment opportunity from a valuation point of view.

To value a stock, I use four different valuation models, then take an average of the four fair prices. For more details on my approach, see Dividend Growth Investing Lesson 11: Valuation.

FASTGraphs uses the historical average P/E ratio of the whole stock market (which is P/E = 15) to represent a fair valuation. That P/E = 15 value is the used to draw the orange fair-price reference line on the following graph. I circled that value along with GD’s own P/E ratio. 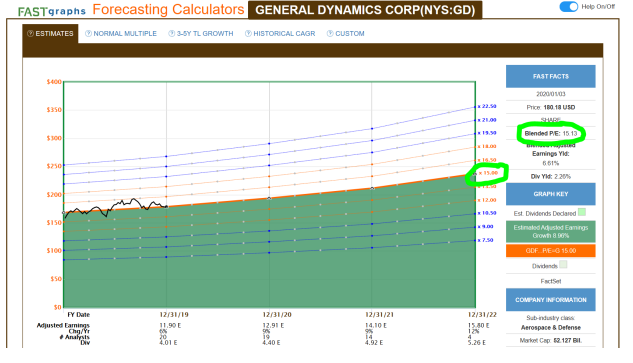 The two P/Es are practically identical, which suggests that GD is fairly valued.

That valuation ratio suggests that GD is 1% overvalued.

FASTGraphs offers another fair-value reference line. This one is based on the stock’s own long-term valuation rather than the market as a whole. That is, this model “normalizes” the valuation to GD’s own record. 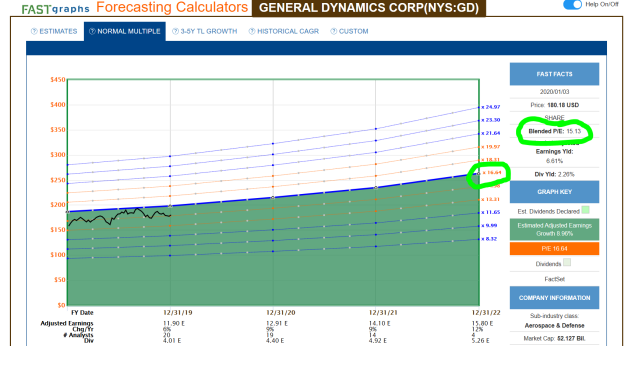 This model presents a different picture, because GD’s long-term average P/E is higher than its current P/E. The balck price line is below the blue fair-value reference line.

This fair price is just inside the +/- 10% range that I call “fairly valued.”

Instead, they use a discounted cash flow (DCF) model. Using conservative projections, they discount all of the stock’s estimated future cash flows back to the present to arrive at a fair value estimate. The idea is that a stock’s fair price is equal to the net present value of all of the company’s future cash flows.

Morningstar also calculates General Dynamic’s price as a little (4%) undervalued. Their model suggests a fair price of $188 per share. 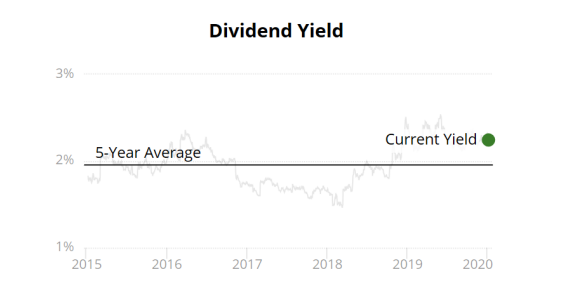 That suggests the stock is undervalued. To calculate the degree of discount, I again form a valuation ratio, this time by comparing the yields:

The average of the four models suggests a fair price for General Dynamics of $193, compared to its actual price of about $180.

Thus I conclude that GD is within the “fairly valued” range of +/- 10%, although its price does compute to being 7% undervalued.

General Dynamics is a very high-quality company, as shown by its score of 24 out of 25 points on its Quality Snapshot. And by my calculations, its price is actually a little undervalued.

If you have room in your portfolio for a mid-yield-fast-growth dividend company, GD is certainly worth a look.

Here are recent write-ups on General Dynamics that you can use for further research.

General Dynamics is a holding in Jason Fieber’s FIRE Fund that he uses in early retirement.

This is not a recommendation to buy General Dynamics. As always, perform your own due diligence. Check the company’s complete dividend record, business model, financial situation, and prospects for the future. Also consider how well it fits (or does not fit) your long-term investing goals.