I have been running a real-money Dividend Growth Portfolio (DGP) since 2008. It is a live demonstration of dividend growth investing in action. I report on the DGP every month. You can access the most recent report here.

While the DGP is generally a buy-and-hold enterprise with very little turnover, it is not a totally passive buy-and-ignore portfolio.

Indeed, one of the things I try to illustrate through the DGP is thoughtful portfolio management.

I had thought that there would be no more transactions in the DGP this year, but Boeing’s continuing difficulties with their 737 Max airplanes, plus the company’s recent dividend freeze, caused me to change my mind.

The DGP’s business plan designates specific circumstances that call for possibly selling a position. Two of them are (1) If a stock cuts, freezes, or suspends its dividend, and (2) If a company undergoes significant fundamental change.

These two reasons induced me to sell Boeing (BA), a position I had held since 2016.

Why I Sold Boeing

I try to hold high-quality companies in the DGP. Boeing’s difficulties with the 737 Max have become one mis-step after another, topped by the company’s obvious inability to credibly predict when the plane will be returned to service. Several estimated dates have come and gone, as regulators around the world refuse to recertify the plane for use.

Investigations have revealed troubling facts about the plane’s design and called into question the company’s culture regarding not only design safety and but also production practices.

Failing to get certifications, and the resulting inability to deliver planes to customers, led Boeing, this past Monday, to confirm reports that it was suspending further production of the Max. Since the grounding of the aircraft in March, Boeing had continued to build new airplanes. It now has about 400 of them in storage.

I consider Boeing’s problems with the Max, the revelations about how it was designed and apparently rushed to market, and its inability to fix the plane and get it certified, to reflect fundamental problems within the company.

Then, also on Monday, Boeing announced its next dividend, payable in March. This has been the quarter that Boeing has announced dividend increases for the past 8 years, but Monday’s announcement holds the dividend steady. In other words, Boeing’s dividend is frozen. March’s payment will be the 5th consecutive quarterly payment of the same amount.

Because Boeing does not have a high yield, its role in the DGP is mid-yield-fast-growth. With its dividend frozen, it cannot fulfill that role. I had a price gain of over 100% in the stock, so I decided to sell it out of the portfolio. The price gain can fund other positions that will propel the DGP’s income production forward.

I do not often sell out of positions, but when I do, I redeploy the money immediately. Other than accumulating dividends awaiting reinvestment, I don’t hold cash in the DGP. It’s always fully invested.

I believe in investing like you’re the CEO of your own business. (See DGI Lesson 12: Run Your Investing Like a Business.) Perhaps the most important decisions a business owner makes are about how to allocate capital.

That’s what I am doing here: Allocating capital. I am moving capital from a stock that I no longer want into stocks that appear to be better bets to help attain the main objective of the portfolio, which is to generate reliable, increasing income through dividends.

Picking out two high-quality, decently valued companies to replace Boeing was relatively easy. I have been high on 3M (MMM) since I analyzed it as a Dividend Growth Stock of the Month in May, and in fact I have purchased MMM twice since that article. I decided to add to that position again, using half the money from the sale of Boeing.

I have also been keenly interested in Enbridge (ENB) since I made it my Dividend Growth Stock of the Month in October. I decided to use the rest of the money from Boeing to start a position in Enbridge.

Both of those stocks were undervalued when I wrote them up, and they are still undervalued according to my models. On top of that, they both yield more than Boeing, so my portfolio’s income production will go up immediately.

I executed the following three transactions within a few minutes of each other on Tuesday, December 17, 2019. The following screenshot from E-trade shows the sale of Boeing (red dot) and the purchases of 3M and Enbridge (green dots).

The proceeds from the sale were $2297. The total cost of the two purchases was $2309. I took the extra $12 from my dividend kitty. That will not delay the next reinvestment when the kitty hits $1000.

Since MMM was already in portfolio, Enbridge replaces Boeing, and the DGP remains at 26 positions.

Portfolio Before and After

3M and Enbridge both have higher yields than Boeing. Here is a comparison of the annual income from each in the DGP.

The net difference in annual income is +$54 per year. Here, from Simply Safe Dividends’ portfolio tracker, is a snapshot of the portfolio prior to selling Boeing and buying 3M and Enbridge:

And here is the snapshot after the transactions. 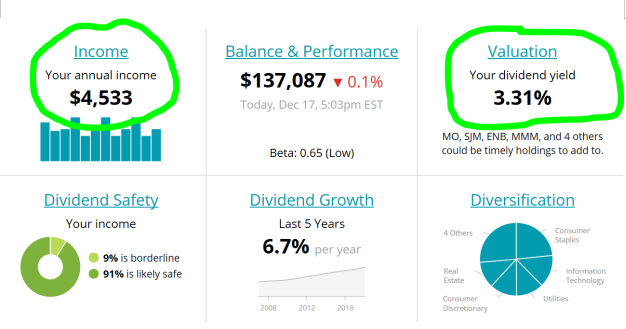 I would not have made these changes if Boeing still held my confidence. But the company’s performance in designing the Max, minimizing the need for pilot training, not grounding the plane voluntarily, and being unable to fix the Max’s design flaws in a timely manner caused me to see Boeing as a troubled operation.

I hope Boeing comes back strong. It has been an American success story not matched by many other companies. For my own purposes in running the DGP, however, I did not want to wait any longer to see how things turn out.

I replaced Boeing with two fine companies. My position in 3M has grown from nothing to 2% of the portfolio since my first purchase last August. Enbridge becomes a starter position representing just under 1% of the portfolio. The swaps increased the portfolio’s annual income by 1%, and the new shares help me advance the DGP’s main goal, which is to build a reliable growing income stream over many years.

The new positions will be reflected in the next monthly report at the end of December.