There comes a time in every investor’s life when he or she must decide what to do about a stock that has been languishing.

I have arrived at that point with the 3M (MMM) position in DTA’s Income Builder Portfolio.

We bought the industrial conglomerate back on Jan. 30, 2018, near its all-time high. What has transpired since has not been pretty.

While the value of our portfolio has soared — outperforming even the sizzling overall market — 3M has sputtered. (Heck, that’s probably an insult to the word “sputtered.”) 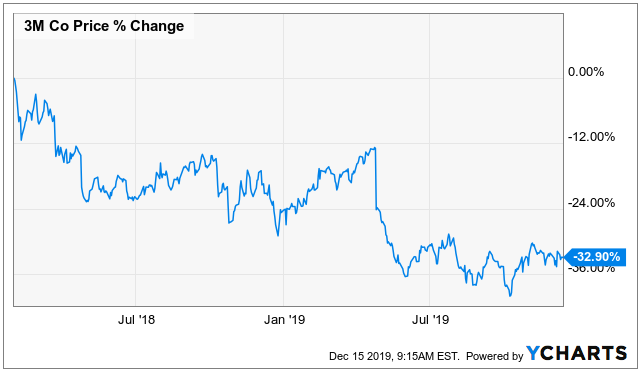 Selecting MMM when its price/earnings ratio was about 28, a two-decade high, has turned out to be by far the worst decision I have made as the steward of the Income Builder Portfolio.

OK, so that’s what has happened to our 3M position. Investing, though, is about looking ahead.

If I felt MMM was a broken company with little chance at long-term success, I would shed a tear, swallow hard and sell it at a loss.

I do not believe that is the case, however, so I am doing the opposite of selling.

Come Tuesday, Dec. 17, I will execute a purchase order on Daily Trade Alert’s behalf for about $1,000 worth of 3M stock.

We expect this to be our last buy of the year, meaning the IBP will head into 2020 with stakes in 29 businesses.

I initially picked 3M for the portfolio after it had released a sensational earnings report for the fourth quarter of 2017, when it easily beat estimates for earnings and revenues, aggressively raised guidance for 2018, and increased the dividend 16%.

That made it a win-win-win-win proposition for the IBP, in my view, despite MMM trading at a high multiple.

I wasn’t overly concerned when the stock’s price began to fall due to Donald Trump’s trade war with China, as 3M was hardly the only industrial name getting hit hard by the acrimonious, escalating battle. 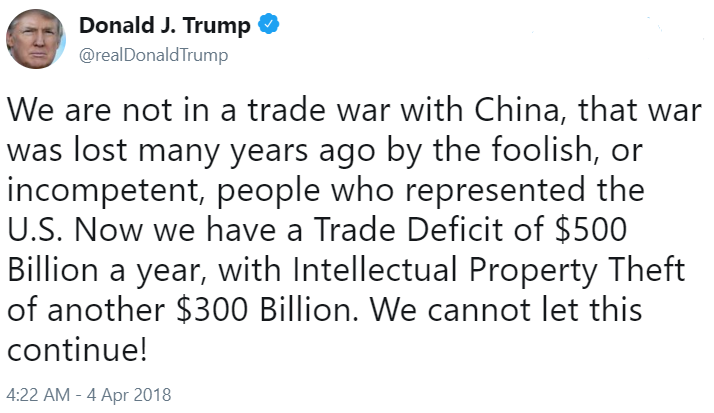 In late April 2018, an earnings miss and lowered guidance led to MMM’s price getting knocked down 7% — and falling under $200 for the first time since the IBP bought it.

After that, a combination of mediocre performance and continued trade tensions conspired to keep 3M down.

A decent Q4 2018 earnings report, a 5.9% dividend increase and a business realignment from five segments to four seemed to encourage investors, and the price gradually climbed back up to $219.

This past April 25, however, 3M had a dismal earnings call that featured a huge miss on estimates and a significant lowering of forward guidance.

Share price that day fell an astounding 13% to $191 (red X in following graphic) — starting a rough stretch that also included: a $6.7 billion acquisition of medical device maker Acelity that led to a reduction in share buybacks (blue X); China announcing retaliatory tariffs against the United States (black X); and a downgrade of MMM by JPMorgan analysts (purple X). 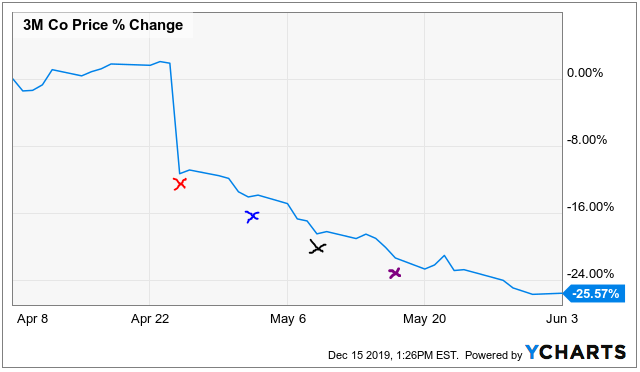 3M shares fell to a multi-year low of $150.58 on Oct. 8 before gradually climbing back toward $170 on better-received news such as settled litigation, offloading of less-successful business segments, and trade optimism.

Even though some believe 3M paid too much for its most recent acquisition, Acelity pulled in $1.5 billion in 2018 revenues as a private company, and it should contribute nicely to MMM earnings by 2021. 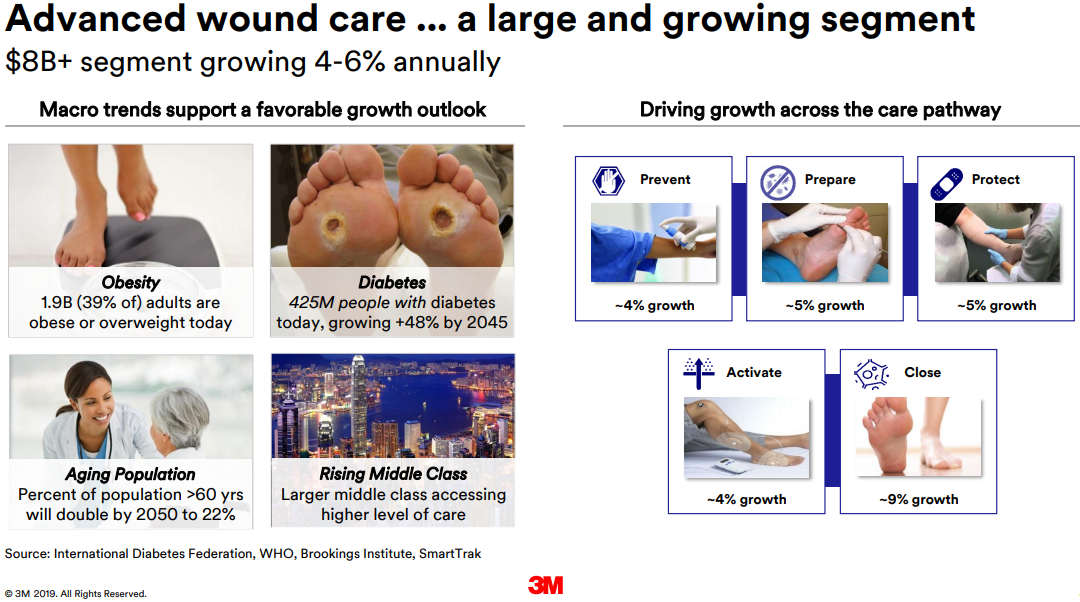 Nothing in the firm’s latest results alters our long-term view of the firm, and we are please to see sequential improvements to overall margins in three of 3M’s four segments. Despite market skepticism over its restructuring initiatives, we think these initiatives are clearly paying off for the firm. And while most analyst questions focused on near-term weakness, we were pleased with the strong results in Health Information Systems, which was up high single digits in the quarter thanks to the acquisition of M*Modal. The firm recently launched a new AI clinical documentation software product, which we think plays to one of 3M’s core strengths in its digital platform. Greenshoots over fundamental recovery in some of 3M’s industrial business divisions are also showing evidence of recovery.

Most economists believe Trump’s recently announced “phase one” trade deal with China is not much of an accomplishment; for example, while China has agreed to buy more U.S. agricultural products, the amount purchased will be well short of the pre-tariffs total.

Nevertheless, even a face-saving semi-truce in what Trump had claimed would be an “easy to win” war figures to be at least a short-term boost for industrials and other U.S. companies that do a lot of business in China.

Also, many of 3M’s financial metrics look fundamentally sound, as illustrated by the following graphic from Simply Safe Dividends. 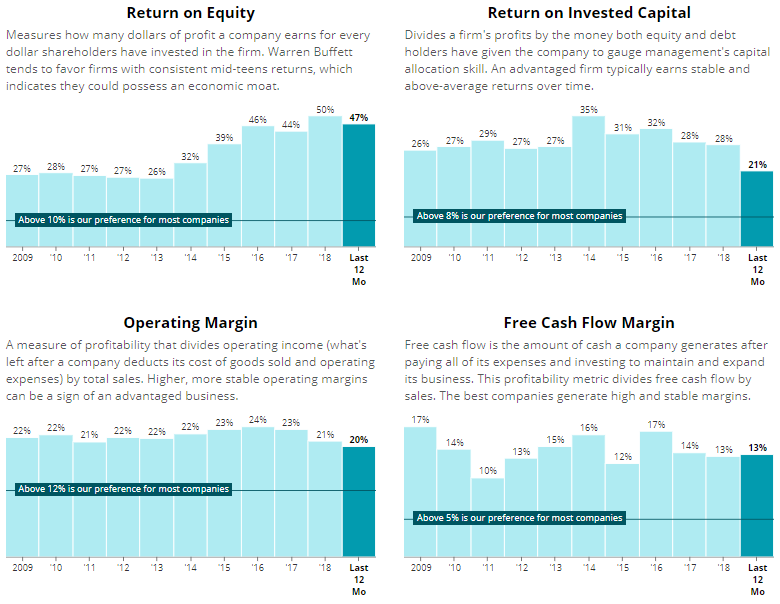 And Then There’s The Dividend

Even with its struggles these last couple of years, 3M continues to do well in most quality categories.

MMM gets an outstanding AA- credit rating from Standard & Poor’s and top Financial Strength (A++) and Safety (1) scores from Value Line.

The company has been making distributions to shareholders without interruption for more than a century, and its 3.4% yield is at its highest point since the Great Recession.

At 61 years, MMM has one of the longest dividend-growth streaks on record, and it has grown its payout an average of 9% over the last two decades. 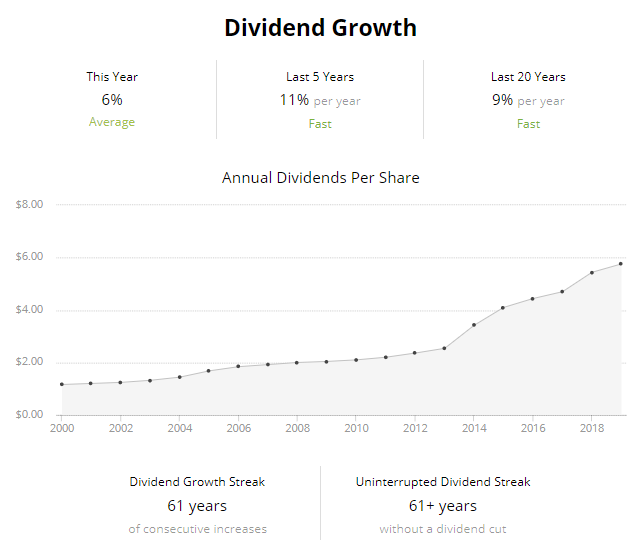 For more about 3M’s dividend and fundamentals, check out this May 31 article from my DTA colleague, Dave Van Knapp: HERE.

Although 3M still faces many challenges as it tries to deal with hurdles both domestic and abroad, I nonetheless believe it is a solid long-term investment and a reliable income producer.

I never seriously considered liquidating the Income Builder Portfolio’s position, and the semi-truce to the trade war helps make this look like a decent time to add more MMM.

My next article, scheduled to be published on Wednesday, Dec. 13, will review our purchase and thoroughly discuss valuation.

As always, investors are urged to do their own research before buying any stock.