Only a couple of months after I started writing for Daily Trade Alert, in February 2018, I presented the dozen technology companies on my Income Builder Portfolio watch list.

Since then, we have gradually added tech names to our real-time, real-money, Dividend Growth Investing endeavor.

We added a fourth company from the sector on Tuesday, Dec. 10, when I executed a purchase order on DTA’s behalf for 23 shares of networking equipment maker Cisco Systems (CSCO) at about $44 each. 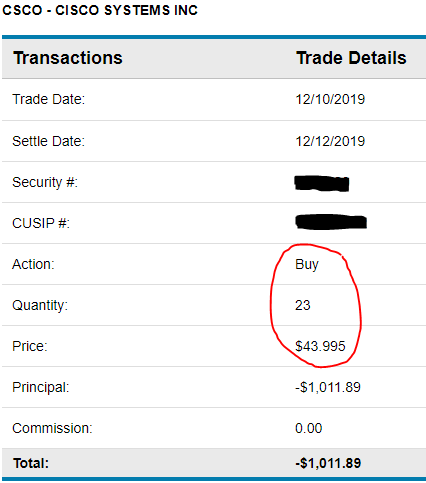 Buying Apple, Microsoft and Broadcom long before taking a position in CSCO proved to be fortuitous. While the first three have produced tremendous gains since joining the IBP, Cisco is trading at almost the exact same price now as it was back in February 2018.

The purchase brings our technology sector weighting in line with most others in the Income Builder Portfolio.

There are many reasons for an investor to want Cisco stock; I discussed a few in my previous article, and fellow DTA writer Dave Van Knapp wrote extensively about CSCO in explaining why he picked it as his Dividend Growth Stock of the Month.

High on the list of reasons for both of us: a generous, reliable and growing dividend that now stands at $1.40/year (.35/quarter).

The following Simply Safe Dividends graphic gives the highlights of Cisco’s payout, as well as other information. 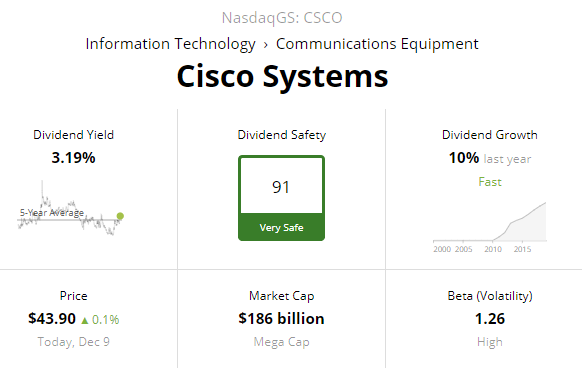 That will be reinvested right back into CSCO stock, as per the IBP Business Plan, adding about .18 of a share.

Assuming Cisco sticks to its pattern of recent years, it will announce its 2020 dividend increase in mid-February.

After many years of having raised its payout at a double-digit-percentage clip, the company delivered a more modest 6.1% hike in 2019. Conservatively, we will forecast a similar raise next time, to .37/quarter.

So come April, our new share total of 23.18 would generate an $8.58 dividend, which in turn will buy more CSCO shares. And on and on the position will grow over the ensuing months and years.

Even though Cisco’s earnings and revenue aren’t growing as they did during the golden days of the dot-com boom, analysts still regard the company favorably. 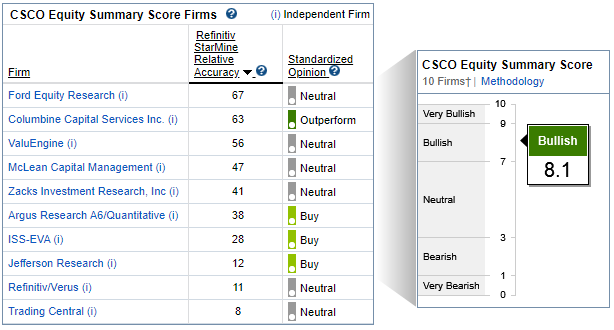 CFRA has a “Buy” rating and envisions nearly 20% price appreciation over the next year.

Schwab assigns the company its highest grade: A, for expectations CSCO will strongly outperform the market in 2020.

CFRA says Cisco’s fair value is a little lower than its current price. 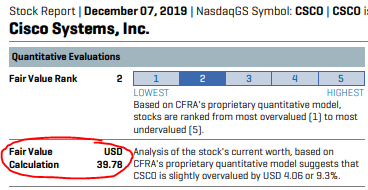 ISS-EVA does not offer fair value as a dollar amount, but its analysis has found that “CSCO is more attractively priced in relation to its true value than all but a few of the stocks in its industry.” 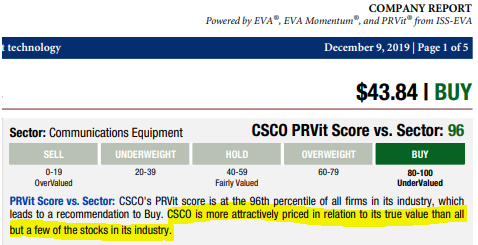 The first, a look at the last two decades, shows how overvalued Cisco was during its dot-com boom heyday … and then shows what happened when the boom turned into a bust.

Just when the price was starting to recover again, the Great Recession happened, and Cisco’s P/E ratio has been below 15 most of the time since then. 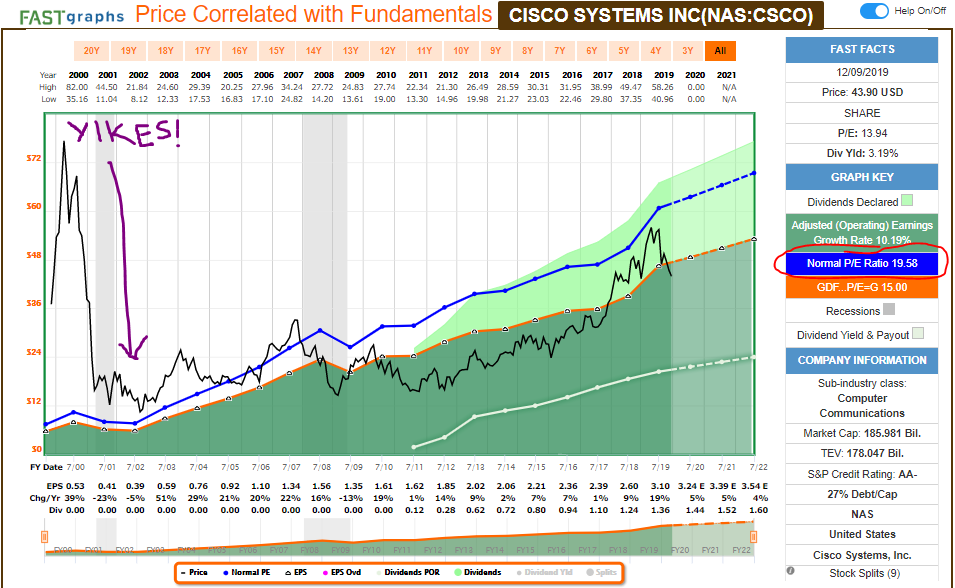 The above graphic demonstrates why it’s not very useful to look at a normal P/E ratio over such an extended period. The ridiculous valuation of the late-1990s and early-aughts skewed the 20-year average to a misleading 19.58 (red-circled area).

The following FAST Graphs image offers a more recent — and more accurate, in my opinion — look at today’s P/E ratio (13.9) relative to Cisco’s norm (13.4). That says CSCO is just about fairly valued now. 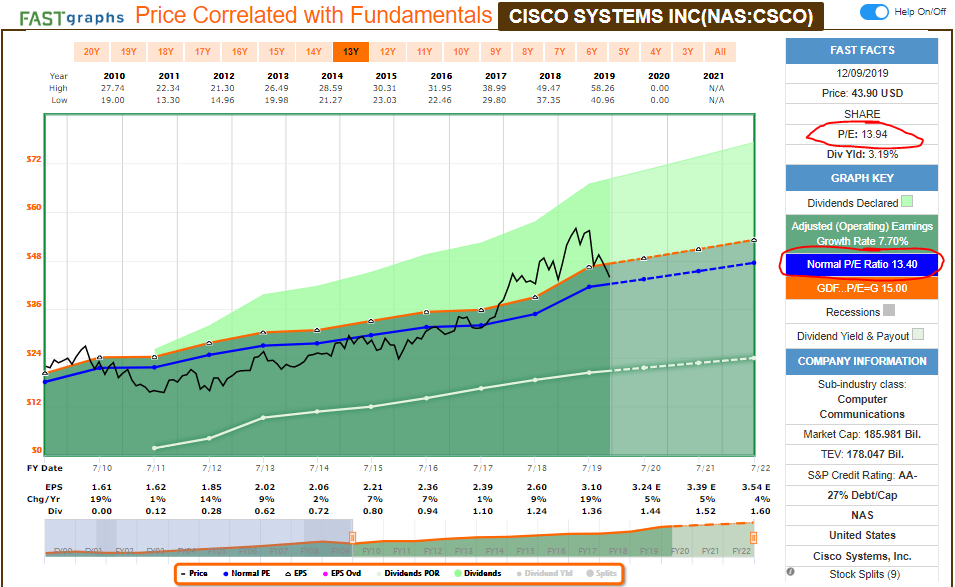 At a time when it’s not easy to find high-quality stocks that yield 3% and aren’t too richly valued, I’m very happy to bring Cisco into the IBP fold.

The Income Builder Portfolio now owns 29 companies, and this Cisco purchase pushes our projected annual income over the $1,500 mark.

Not bad for a project we launched only 23 months ago.