Back in April 2000, I needed a new desktop computer, and a leading discount broker was offering a deal I couldn’t refuse: Open an E-Trade account and buy a certain brand of computer, and they would deposit $300 into my account.

After opening the account and getting the 3 Benjamins, I added several thousand dollars of my own and began doing what everybody was doing at the time: making guaranteed BIG BUCKS by investing in internet-related companies!

One of my first buys was Cisco Systems (CSCO).

I had no idea what Cisco did, but I knew that everybody was making huge moolah buying stock in the company.

I was getting a bargain!

Less than a year later, the dot-com bubble had burst … and CSCO’s price had crashed and burned. 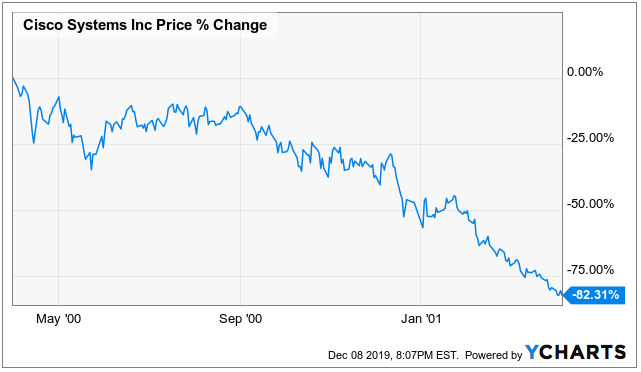 Since then, I have learned a lot about investing, and also a little about Cisco.

I have learned that one probably shouldn’t invest in companies one doesn’t understand — even if everybody is doing so.

I have learned that companies with P/E ratios pushing 150 probably are flirting with disaster, because they tend to fall the hardest in a recession.

And I have learned that unlike hundreds of now-defunct dot-com-era companies, Cisco was able not only to survive but thrive.

Nearly two decades after my first flirtation with the company, I have selected CSCO as the next component of DTA’s Income Builder Portfolio.

Come Tuesday, Dec. 10, I will execute a purchase order on Daily Trade Alert’s behalf for about $1,000 worth of the world’s largest supplier of high-performance computer networking systems.

It will become the portfolio’s 29th company and fourth in the Information Technology sector, joining Apple (AAPL), Microsoft (MSFT) and Broadcom (AVGO).

Whereas I thought (incorrectly) that I was getting a great deal on Cisco for myself back in 2000, the IBP actually will be getting a pretty nice buy all these years later — Cisco’s P/E ratio is about 14.

Once a go-go growth company, it is now a mature business whose earnings are only expected to increase by mid-single-digit percentages the next few years. 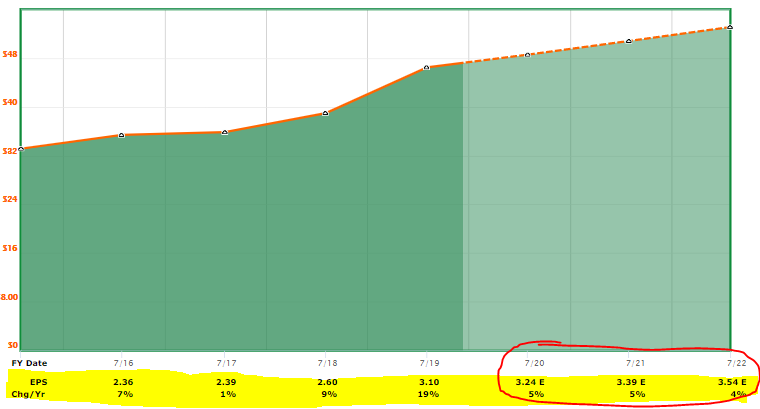 Yep, the former dot-com darling has become a boring, reliable, income-producing “old tech” giant that is held in many a Dividend Growth Investing portfolio.

My DTA colleague, Dave Van Knapp, actually beat me to the punch, as Cisco was his most recent Dividend Growth Stock of the Month.

His report – HERE – was so comprehensive and recent, it would serve no purpose for me to repeat what he said.

What I will echo is Dave’s assertion that Cisco has outstanding financials such as return on equity, return on invested capital, operating margin and free cash flow. 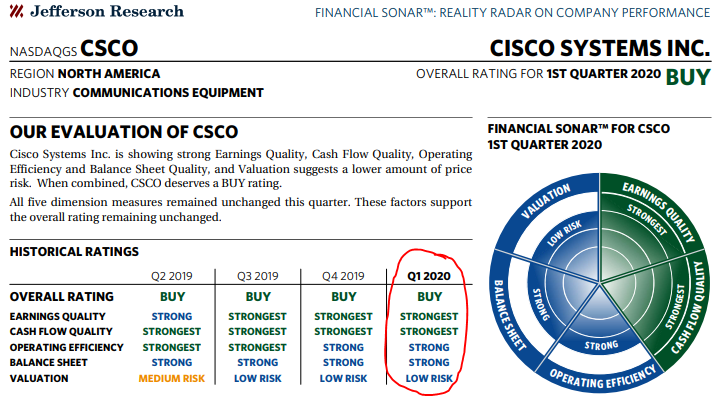 So even though the company reported only 2% year-over-year revenue growth during its most recent earnings call, we’re talking about a consistent money-making operation.

If any of these situations get resolved, Cisco’s order book will likely benefit. Meantime, Cisco thinks its focus on becoming more software-centric will lessen the impact of macroeconomic shifts in the future. The company is on pace for software and services to make up 50% of revenue by 2020, while software alone should comprise 30% of the total. Cisco is still well positioned to take advantage of upcoming technology transitions. The company should start to benefit from 5G when service providers begin building out enterprise service delivery networks, as Cisco can help re-engineer backbones for higher traffic. This is expected to commence in the second half of calendar 2020. Other potential catalysts are the transition to 400-gig infrastructure next year and Wi-Fi 6 adoption. Historically, Cisco has been very good at predicting technology trends, and we have little reason to believe this will change.

One of Cisco’s financial highlights is that it has more cash on hand than debt.

No wonder Value Line assigns CSCO its highest ratings for Financial Strength (A++) and Safety (1), and Standard & Poor’s gives the company a superb AA- credit rating.

Just a decade ago, Cisco didn’t even pay a dividend. Having grown its payout aggressively since 2011, the company now sports a yield north of 3%.

It’s a safe dividend, too, according to Simply Safe Dividends, which gives the company a “safety” score of 91 (on a 100-point scale).

You might be wondering what happened to the Cisco stake that I bought back in 2000. (Or you might not be … but I’m gonna tell you anyway!)

I did what a lot of bad investors did back then — and still do today: After paying way too much for a stock that everybody had to have, I panicked when the market tanked and sold CSCO at a huge loss less than a year. Ugh.

Thankfully, having worked pretty hard to educate myself, I’m far less likely to do the buy-high-sell-low thing these days.

And I feel pretty confident that adding Cisco at a fair price will be a boon for the Income Builder Portfolio, bringing growth in both dividends and total return for years to come.

My next article, scheduled to be published Wednesday, Dec. 11, will recap our CSCO purchase and discuss valuation in great detail.

As always, investors are urged to conduct significant due diligence before buying any stock.