Though I sometimes have been accused of being cheap, I prefer the term “value-minded.”

Semantics aside, whether we’re talking about tonight’s dinner or tomorrow’s vacation or the house I’ll be living in for years, I really, really, really like getting good deals. It’s almost a compulsion.

That goes for stocks, too — even when I’m not spending my own money for them.

The editors at Daily Trade Alert allocate $1,000 every couple of weeks for me to put together our Income Builder Portfolio, and I want to get them the most shares of the best companies I can.

Although valuation will be considered before each purchase, it will be a secondary consideration to the perceived quality of the company.

An investor making sizable additions to a large, established portfolio might be primarily concerned with valuation. The IBP, however, is a Dividend Growth Investing portfolio that will be built over time through regular $1,000 purchases – similar to the concept of dollar-cost averaging.

With the bull market in Year 11 and with major indices repeatedly hitting all-time highs, it is getting more and more difficult to find good values on high-quality companies.

Difficult … but not impossible.

Comcast (CMCSA) is growing earnings and revenue, and it is projected to keep doing so. The worldwide technology and entertainment conglomerate is a leader in its industry. And, as I showed in my previous article, it ranks high in most quality categories.

All that, and Comcast also is available at an attractive valuation point. Both its forward P/E ratio of 13.44 and PEG ratio of 1.13 are historically low for the company.

I will go into valuation in a lot more detail shortly, but the above graphic presents part of my reason for adding to the IBP’s Comcast position. 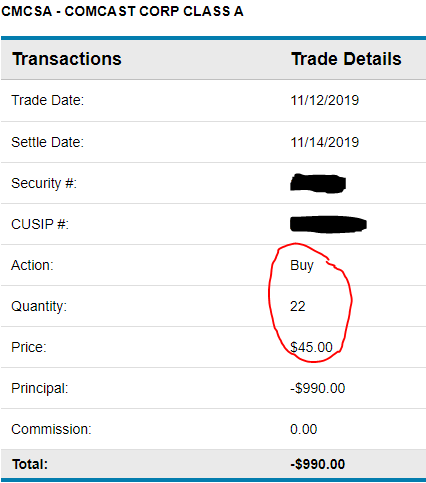 Comcast started making quarterly distributions to shareholders in 2008,  and it has been growing those dividends aggressively ever since. There is every reason to believe those delightful “Divvy Dollars” will continue to grow, as CMCSA’s payout ratios are very low. Comcast gets a “Very Safe” score of 89 on Simply Safe Dividends’ 1-100 scale, and the company easily generates enough free cash flow to fund future increases.

In accordance with IBP guidelines, those funds will be reinvested right back into CMCSA, buying approximately .24 of a share more.

Also in January, if Comcast keeps doing what it has for years, the company will announce another double-digit-percentage increase to its quarterly dividend.

Such compounding will continue, not just with CMCSA but with each of our 28 positions, which is why we gave this project the name we did.

Market-watchers are bullish on Comcast, with 26 of the 31 analysts surveyed by Reuters giving the company either “Buy” or “Outperform” grades.

Among the many analysts who expect Comcast to outperform the market over the next 12 months are those from Columbine Capital.

Specific near-term price targets were established by several analysts. As the following graphics show, those range from $48 to $55. 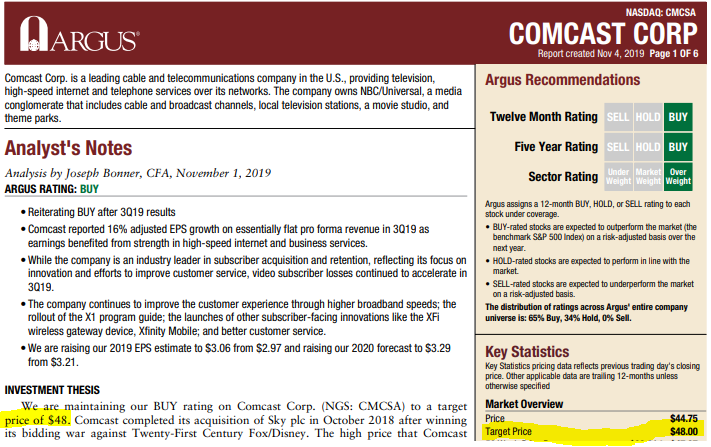 Value Line predicts a similar near-term price range (blue-circled area below) but expects significant appreciation — 55% to 111% — over the next 3-5 years (red circle). 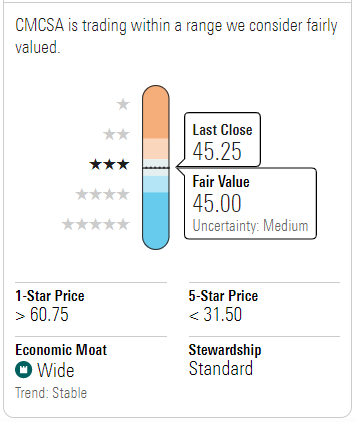 The following FAST Graphs illustration makes the case for CMCSA being a relative bargain. 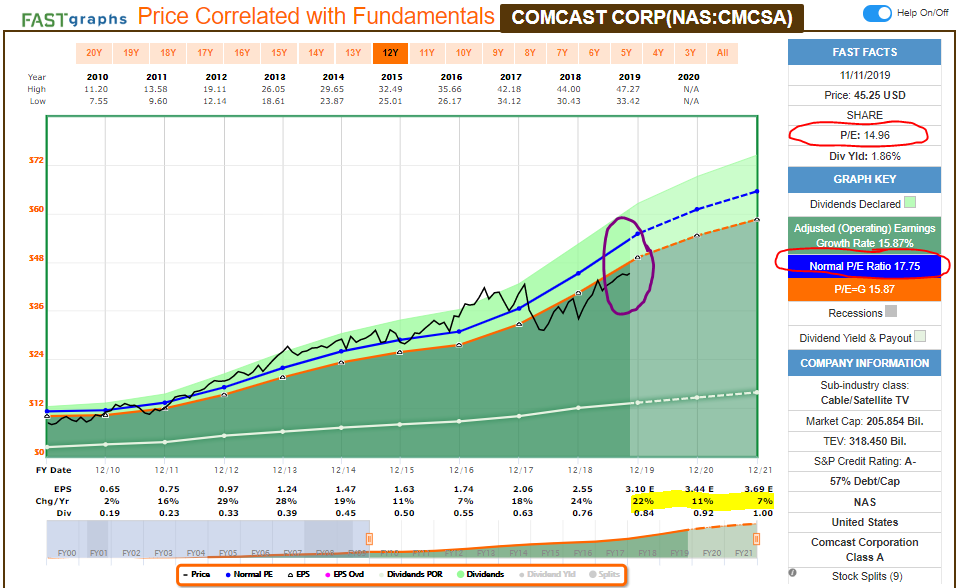 The red-circled areas indicate that the “blended P/E ratio” of 14.96 is quite a bit less than Comcast’s normal P/E ratio of 17.75. And the purple circle shows the black price line sitting well below the blue normal-valuation line.

The yellow-highlighted area in the FAST Graphs image indicates the anticipated growth of Comcast’s future earnings — realistic expectations that make me confident about having added to the Income Builder Portfolio’s CMCSA stake.

In Comcast, we certainly seem to have a quality company at a fair price, or maybe even a discount.

What more could any cheapskate — wait, I mean any “value-minded” investor — ask for during this runaway bull market?