International Business Machines (IBM) began life as the Computer-Tabulating-Recording Company in 1911. It was renamed in 1924.

IBM remains a powerful force because it is part of (or the entire) infrastructure for so many technology operations.

The company derives 37% of its revenue from infrastructure services, 29% from software, and 23% from IT services.

Only 8% of revenue comes from hardware, for which the company was long known and probably still is the predominant perception of IBM.

But in fact, IBM’s footprint has long since moved far beyond “big iron” hardware.

For example, it manages 90% of the world’s credit card transactions, and it is responsible for 50% of all wireless connections in the world.

Many of IBM’s customers are large companies with complex IT and data-processing needs, and IBM is embedded front-to-back not only in those operations, but also in advising and planning for the next generations of services.

While IBM is often considered to be past its prime and often struggling to catch up to “new tech,” it scores very high in overall quality. Its ratings are green across the board.

On a 0-to-5-point scale for each metric, IBM would score 22 out of 25 points. That’s a high score.
Regarding dividends, IBM yields 4.7%. It is one year short of being a Dividend Champion. This year’s increase was its 24th consecutive year of raising its dividend.

IBM’s dividend increases have shown a declining rate of growth over the past 10 years. In the following table, DGR stands for dividend growth rate:

That pattern of declining increases can be acceptable if a stock’s yield is high, which IBM’s is, at 4.7%. I would characterize IBM as a high-yield, slow-growth stock. That makes it unusual among dividend-growth technology companies, which usually clock in as low-yield, high-growth investments.

I think it is fair to say that IBM is committed to raising its dividend, but also that it has been paring back the size of its annual increases while it adjusts its payout levels to the financial realities of its business. It is not a high-growth tech business any more. 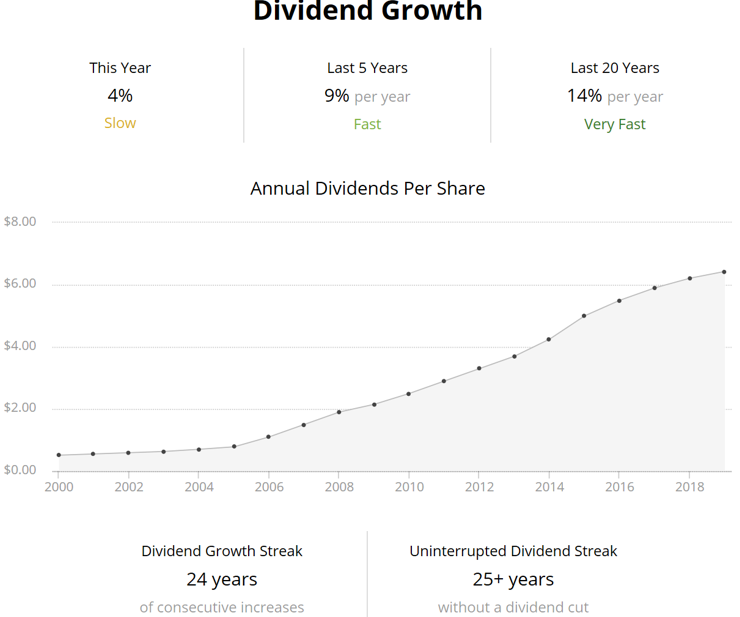 I should add here that IBM has been retiring shares at a fast clip for years. That makes its dividend budget easier to manage, and to increase the dividend each year, because dividends are paid per share.

As of the end of last year, IBM had 32% fewer shares floating about than 10 years earlier, and the total is slightly lower now.

To value a stock, I use four different valuation models, then average out the fair prices derived from each model. For more details on my approach, see Dividend Growth Investing Lesson 11: Valuation.

This model checks the stock’s current price against FASTGraphs’ basic estimate of its fair value.

FASTGraphs uses the historical average P/E ratio of the whole stock market (which is P/E = 15) to represent a fair valuation. That is the used to draw the orange fair-price reference line on the following graph. 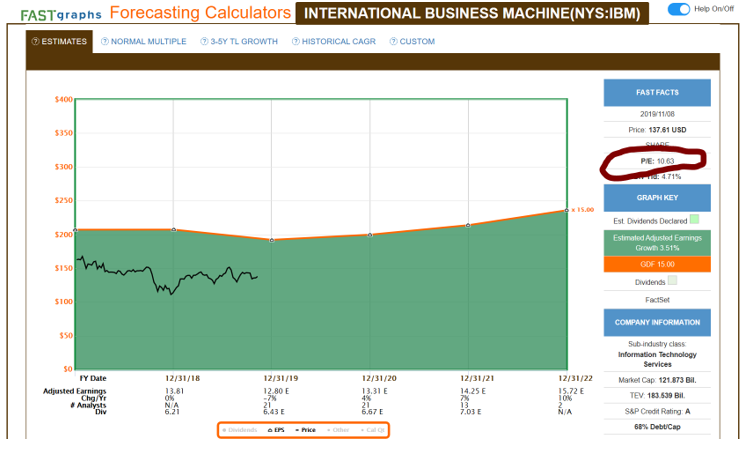 That valuation ratio suggests that IBM is 29% undervalued.

Valuations are assessments, not physical traits, so we want several points of view. We’ll get more from the following valuation models.

FASTGraphs offers another fair-value reference line. This one is based on the stock’s own long-term valuation rather than the market as a whole. That is, this model “normalizes” the valuation to IBM’s own record. 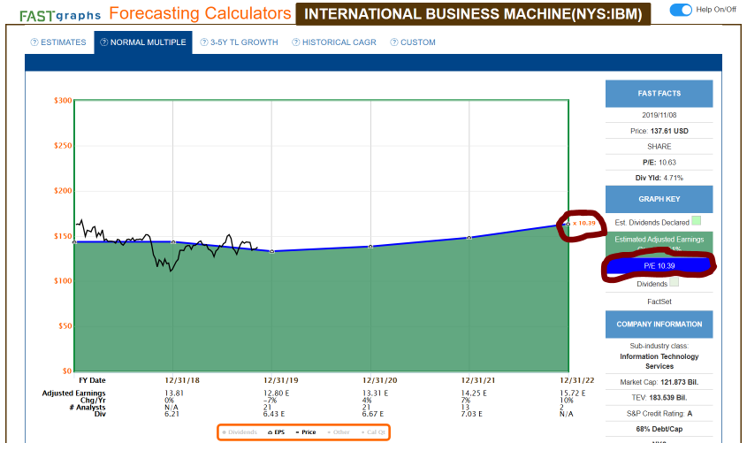 It turns out that IBM’s actual current P/E ratio is almost identical to its 5-year average. Therefore, the black price line and the blue refernce line are practically touching, meaning that IBM is fairly valued using this model.

Instead, they use a discounted cash flow (DCF) model. Using conservative projections, they discount all of the stock’s estimated future cash flows back to the present to arrive at a fair value estimate. 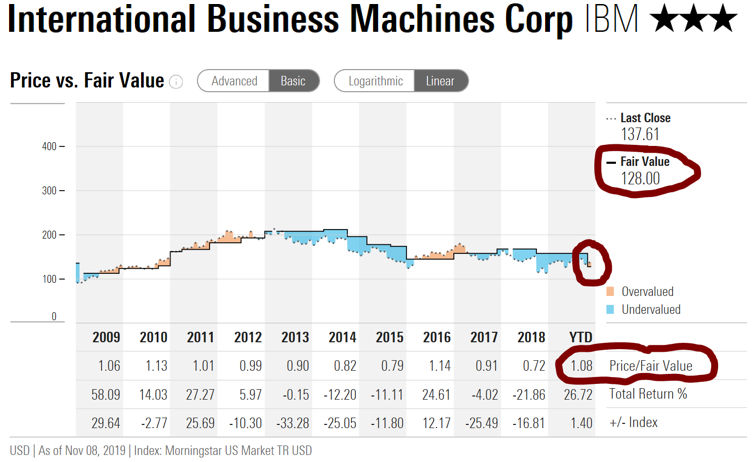 Morningstar gives IBM three stars, which means fairly valued. Looking at the details, their actual calculation is that IBM is 8% overvalued, but that’s within their fair-value band.

It is also within my fair-value band: I consider any stock price within +/- 10% of fair price to be fairly valued. That wiggle room reflects my philosophy that valuation is an assessment, not a physical property that can be measured precisely.

If a stock is yielding more than its historical average, that suggests that it is a better value than usual, because you are paying less to gain access to the stock’s dividends.

Stated another way: With a well-valued stock, you can buy more shares with your money, no matter how much you invest. Because dividends are paid per share, you will get more dividends for that money.

IBM’s dividend yield has increased over the past few years, because its dividend has been raised each year, while its price has hardly moved.

IBM’s annual dividend has been increasing for years, while its price per share has not. In the yield equation, the numerator has increased significantly, while the denominator has hardly increased at all. 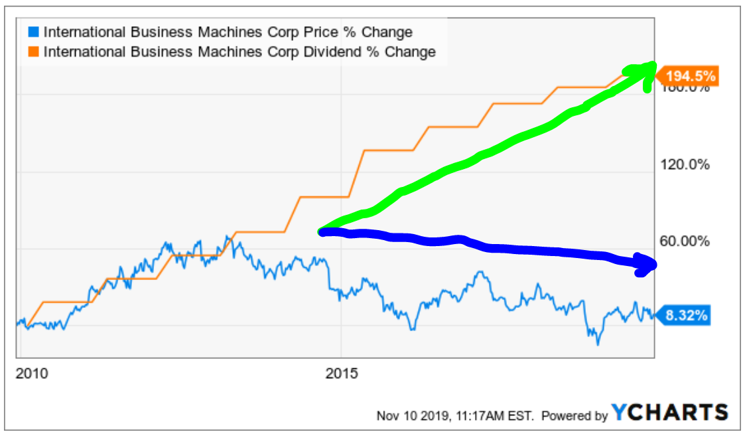 That’s driven IBM’s yield up and up, so IBM’s current yield is higher than its 5-year average. 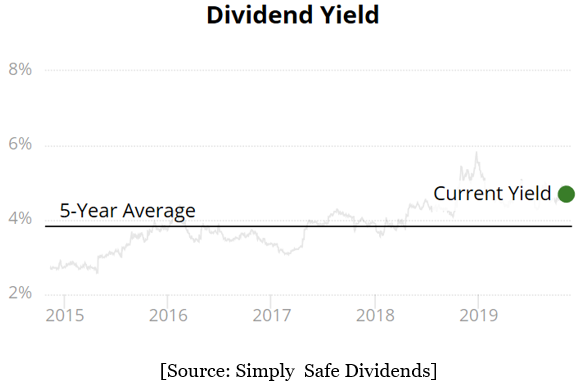 IBM’s current yield of 4.7% is 22% higher than its 5-year average yield of 3.9%. That suggests that the stock is undervalued. 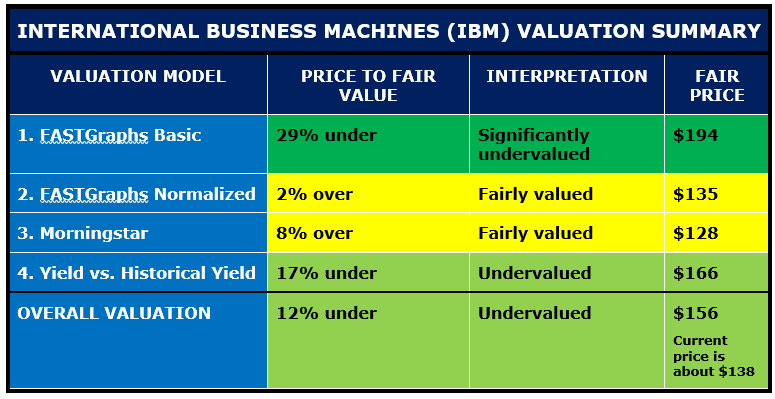 The average of the four methods suggests a fair price for IBM of $156, compared to its actual price of about $138.

That makes IBM 12% undervalued at the present time, according to the average of the four models.

IBM is a component of Jason Fieber’s FIRE Fund early-retirement portfolio. He last wrote about the stock in his Undervalued Dividend Growth Stock of the Week series in August, 2018.

This is not a recommendation to buy IBM. As always, perform your own due diligence. Check the company’s complete dividend record, business model, financial situation, and prospects for the future, as well as its effect on your portfolio’s diversification.

And, before you buy any asset for your portfolio, always be sure to consider how well it fits – or does not fit – your long-term investing goals.