Back in June 2018, Starbucks (SBUX) was trading at about 24 times earnings, and analysts placed the stock’s fair value between $64 and $68.

So while I was happy that DTA’s Income Builder Portfolio was able to acquire SBUX at $56.65 per share, I certainly didn’t view it as the Deal of the Century or anything.

As it turns out, I vastly underrated how good a buy it was.

Starbucks has gone on to be our second-best gainer since we launched this real-money project 22 months ago, behind only McCormick (MKC) and well ahead of Broadcom (AVGO).

As the table above shows, not only has our Starbucks position produced a 52.4% total return, but it also has crushed the overall market.

Had a similar investment in the SPDR S&P 500 Trust ETF (SPY) been made on the same day, its total return would have been a comparatively paltry 11.9% — some 40 basis points lower than that of SBUX.

The ability to operate its business well and perform at a high level is why I decided to add to our Starbucks position.

As the above screen shot shows, the buy executed in two separate transactions a few seconds apart, as sometimes happens with limit orders. The total price paid was $1,009.20.

Of the 28 companies in the IBP, Starbucks is the 17th that we have bought multiple times. The portfolio now owns 30.4658 shares of the world’s largest coffeehouse chain.

Our higher share total, combined with Starbucks’ recent decision to raise its dividend 14%, means our SBUX position will generate about $50 in annual income. That ranks the company right in the middle of the portfolio’s income producers.

The following graphics from Simply Safe Dividends illustrate how the distribution has grown and also show the dividend is “safe” compared to that of other companies. 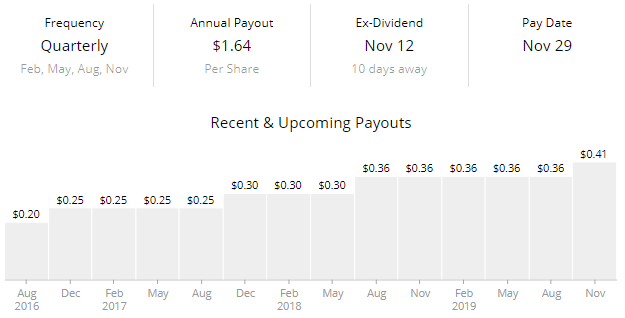 Because we added to our position before the Nov. 12 ex-dividend date, all 30.4658 shares will generate income this quarter.

On Nov. 29, the IBP will receive $12.49. That will be automatically reinvested right back into SBUX as mandated by our Business Plan, purchasing an additional .15 of a share.

Then, in three months, our approximate 30.6-share position will produce $12.55 in income, which again will be reinvested.

This will keep happening with Starbucks, as well as with every other IBP component, and that’s how an income stream gets built.

Specifically, the analysts at CFRA, Credit Suisse and Argus have established target prices for the next year between $100 and $110. 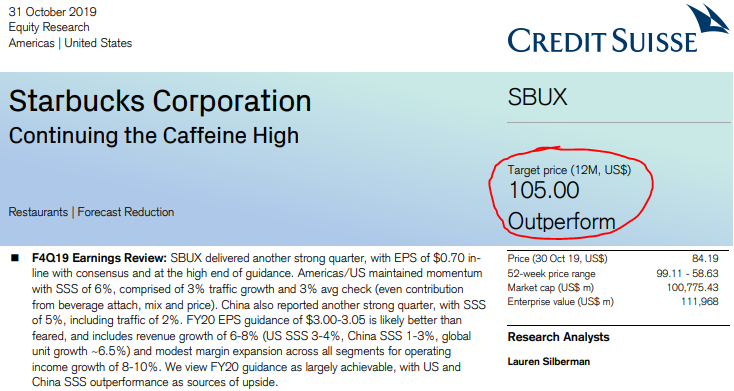 Another analytical company, Ford Equity Research, predicts that SBUX will “strongly outperform the market” during the coming year.

Morningstar Investment Research Center’s analysts believe Starbucks is valued at $90, though they have said they expect to announce “a modest increase” soon.

The following graphic from Simply Safe Dividends shows that the current dividend yield of about 2% and the current P/E ratio of about 30 are right in line with Starbucks’ 5-year averages, suggesting that the company is fairly valued.

FAST Graphs also indicates that SBUX is fairly valued, as the stock’s P/E ratio is only a little higher than its norm since the Great Recession. 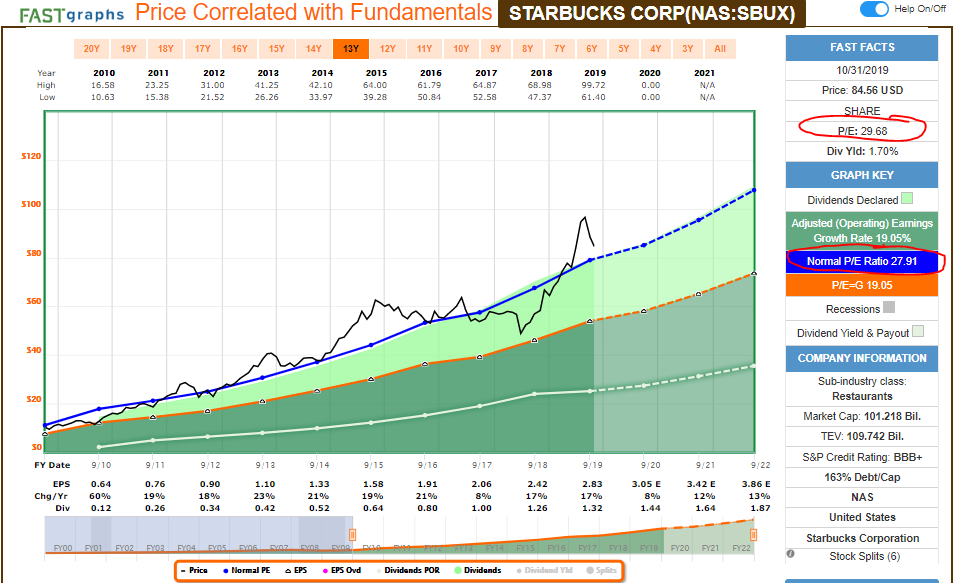 One can see that Starbucks — like the fancy cups of coffee it sells — tends to command a premium price.

Using FAST Graphs to dig a little deeper into the company’s history, we learn that when it was trading at a similar multiple in March 2017, SBUX went on to deliver a 50% total return over the next 2 1/2 years. 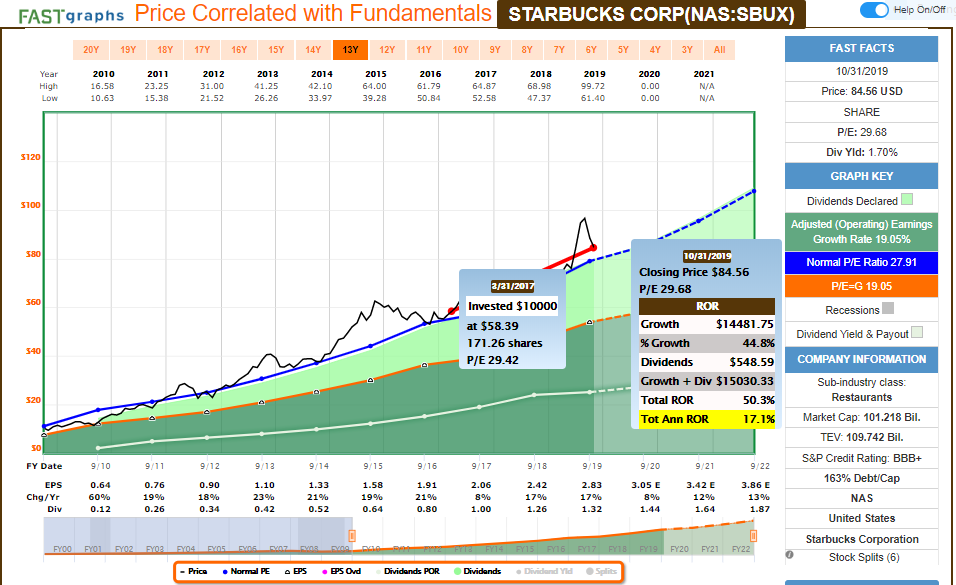 So while I certainly won’t try to claim that SBUX is a “deal” now, I also reject the idea that it is wildly overvalued.

Indeed, most analysts seem to feel it is fairly valued, and it has a good chance to perform exceedingly well in the coming year and beyond.

There are no guarantees, of course. Should the economy fall into a recession, Starbucks’ price could take a big hit. Then again, the same likely will be true of thousands of other companies.

Although I am a little surprised that SBUX has emerged as the Income Builder Portfolio’s No. 2  performer to date, it’s not shocking that it has soundly beaten the market.

After all, since the recession ended, Starbucks’ annualized total return has just about doubled that of SPY. 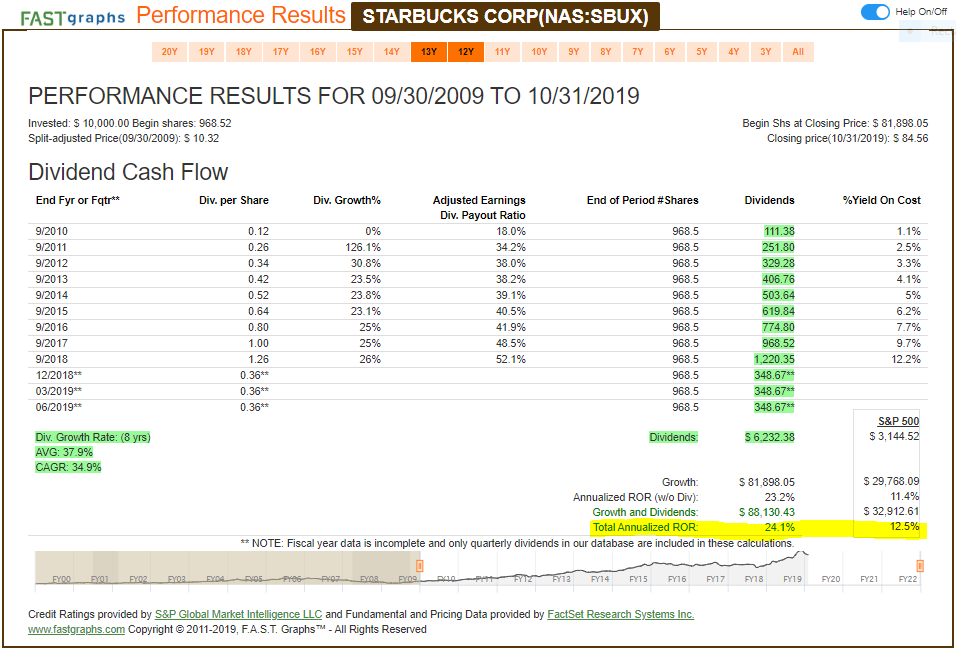 It would be beyond normal levels of optimism to expect such enormous outperformance to continue, but I do have confidence that the company will keep customers coming back for years to come.