On the morning of Sept. 29, 1982, a 12-year-old suburban Chicago girl died after taking Extra Strength Tylenol.

Within two days, six other Chicago-area residents also would die after ingesting capsules of the drug — which investigators quickly determined had been poisoned with potassium cyanide. 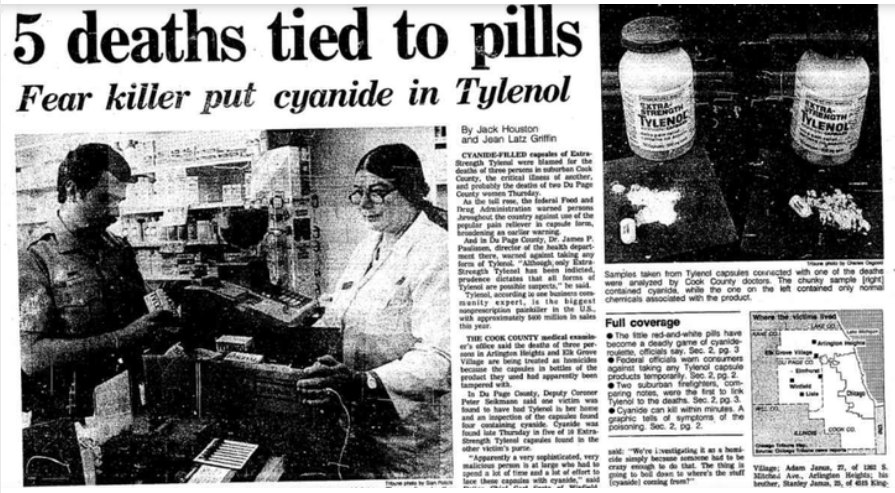 Less than 30 hours after the first death, Johnson & Johnson (JNJ) announced a recall of its popular headache and pain medication. That triggered a nationwide panic … and a steep decline in the stock price.

To this day, the crime has not been solved, and the Tylenol scare ushered in a new era of precautions (including tamper-resistant seals) involving over-the-counter drugs and many consumer goods.

As I sat down to write this article, I wasn’t entirely comfortable revisiting that horrific piece of history; I did not want to trivialize the very real human tragedy that happened in 1982.

Having said that, I couldn’t help but think back to the Tylenol scare on Friday morning, when Johnson & Johnson issued a statement that began:

Out of an abundance of caution, Johnson & Johnson Consumer Inc. (JJCI) announced that it is initiating a voluntary recall in the United States of a single lot of its Johnson’s Baby Powder in response to a U.S. Food and Drug Administration (FDA) test indicating the presence of sub-trace levels of chrysotile asbestos contamination (no greater than 0.00002%) in samples from a single bottle purchased from an online retailer. Despite the low levels reported and in full cooperation and collaboration with the FDA, JJCI is initiating this voluntary recall of Lot #22318RB of Johnson’s Baby Powder, from which the tested sample was taken.

Reports of asbestos in one of its leading consumer products have dogged J&J for some time, resulting in accusations, denials and lawsuits.

Put that alongside litigation over other medical products — including numerous lawsuits against Johnson & Johnson and other companies for their role in the nation’s opioid epidemic — and it’s easy to see the kinds of challenges that major health care corporations can face.

Still, what is important for investors to remember is that strong companies not only survive difficult issues but end up thriving despite them.

And that might help explain why I am making Johnson & Johnson the first triple-dipper for DTA’s Income Builder Portfolio.

Come Tuesday, Oct. 22, I will execute a purchase order on Daily Trade Alert’s behalf for about $1,000 worth of the pharmaceutical, medical device and consumer conglomerate.

Johnson & Johnson is one of 16 companies to have been purchased twice for our 28-stock portfolio, and I expected to wait until at least 2020 before making JNJ a triple-dipper.

But when a buying opportunity presents itself, I like to take advantage.

Price drops happen for a variety of reasons that might not shake my overall confidence in a company: one mediocre earnings report; an investigation into one part of a corporation’s operation; short-term headwinds affecting an entire industry; political upheaval; a stock market correction; litigation; etc.

A successful long-term investor must be able to tune out such “noise.” 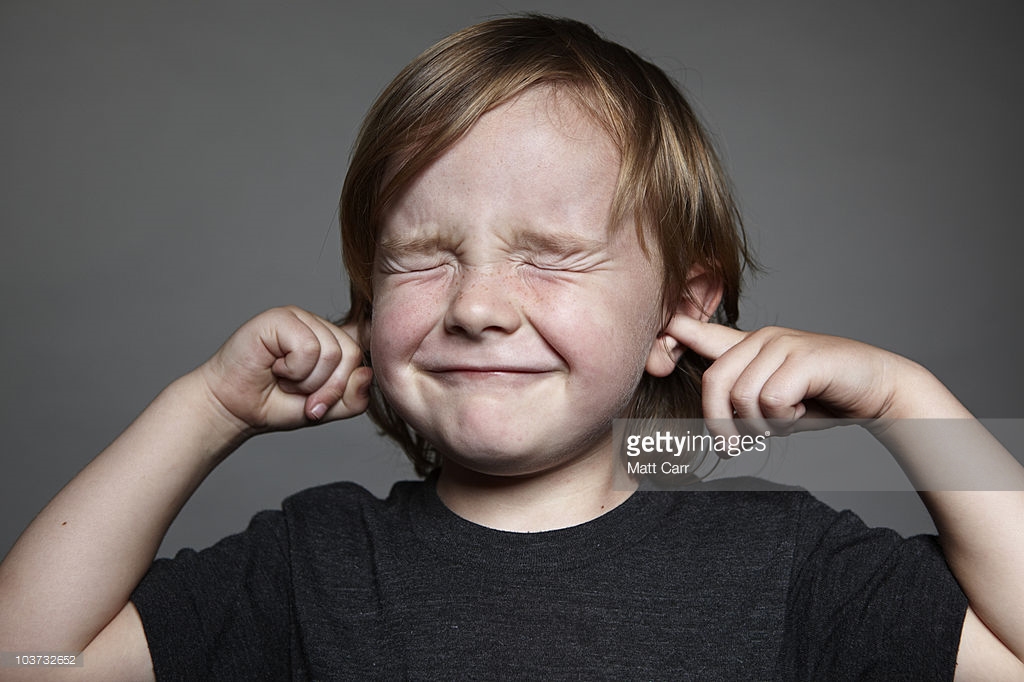 The term “noise” sounds dismissive, but it does not necessarily mean issues are unimportant. I simply expect them to be short-term in nature, and I expect an otherwise outstanding business to respond well to challenges over time.

I will delve more deeply into valuation in my post-buy article, which will be published on Wednesday, Oct. 23.

Otherwise, Mrs. Lincoln, How Was The Play?

The asbestos-related news came on the final day of a week that had been going great for Johnson & Johnson.

On Tuesday, Oct. 15, the company released a gem of a quarterly earnings report.

In addition to beating estimates on both profits and sales, the company raised its full-year guidance — bumping up earnings per share projections to the $8.62 to $8.67 range, and revenue expectations to $81.8 billion to $82.3 billion.

Investors always love it when a blue-chip company gives them a “beat and raise,” and JNJ shares advanced 4.2% over the next three sessions.

There was more good news, too: victories in a couple of lawsuits; a potential settlement of the opioid situation; and positive buzz on several products in Johnson & Johnson’s massive portfolio. 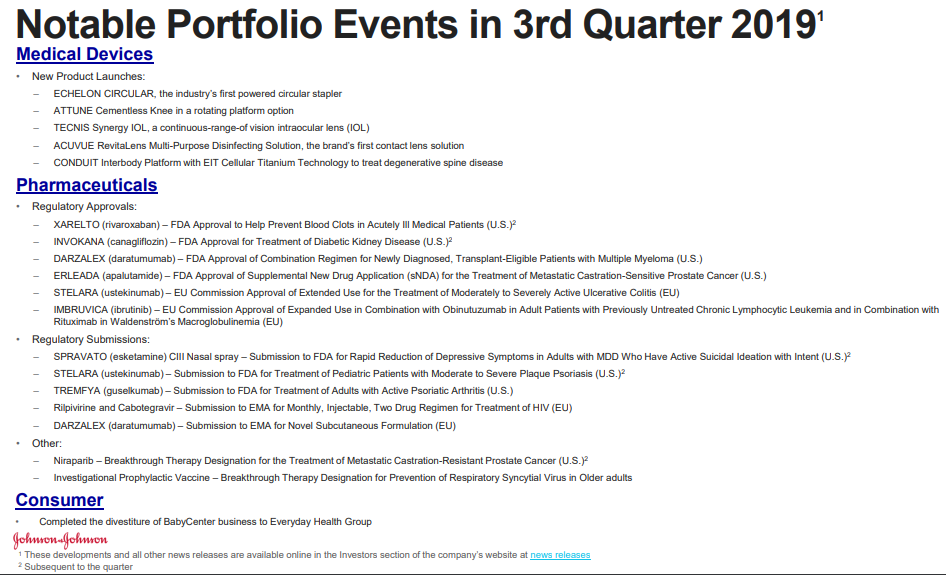 When it comes to overall quality, it’s hard to beat JNJ.

The company is one of only two in the world to receive a AAA credit rating from Standard & Poor’s; the other, Microsoft (MSFT), was our most recent buy for the Income Builder Portfolio. 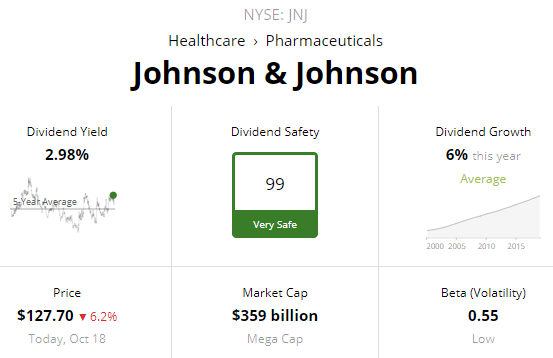 More About The Income

Although total return matters to us, the IBP is first and foremost a Dividend Growth Investing portfolio.

Few companies have a better track record of dividend growth than Johnson & Johnson, which has raised its distribution for 57 consecutive years.

Add in a 3% yield, and it’s easy to see why Johnson & Johnson is one of the most common holdings of DGI proponents.

The Tylenol scare of 1982 was more than just a little “noise.” People died, and even though the incident wasn’t Johnson & Johnson’s fault, its stock price fell 17.5% in a matter of days. 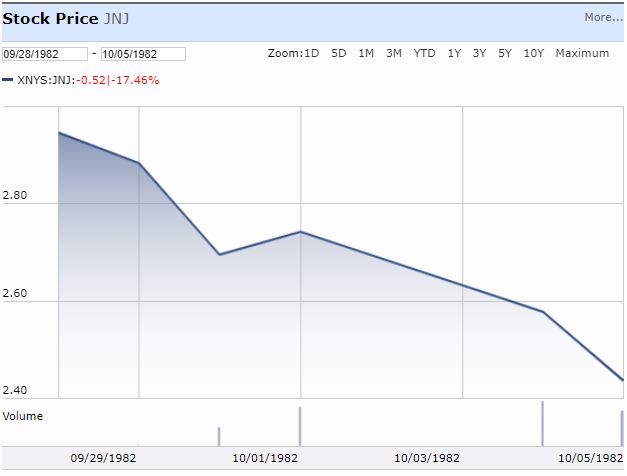 But here’s the thing: As tragic as the incident was, the price actually rebounded to its previous level within two weeks.

By the end of the decade, despite plenty of other headwinds, JNJ was easily outperforming the overall market.

And if one looks at Johnson & Johnson’s 50-year chart below, that 17.5% drop (highlighted in yellow) is all but imperceptible. 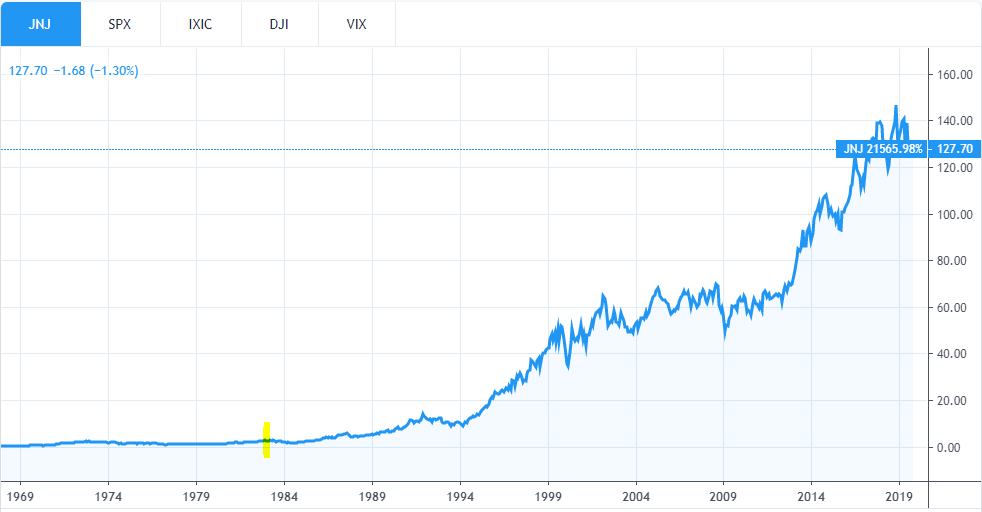 As DGI practitioners, it’s important to balance positive and negative news, and to take a long-term view.

I have determined that the overall quality of JNJ’s business will be able to overcome any short-term adversity, and I feel good about making it the Income Builder Portfolio’s first triple-dipper.

As always, investors are urged to conduct their own due diligence.