Twenty-one months into what we believe will be a long and successful endeavor, here’s what we can say about DTA’s Income Builder Portfolio:

So far, so great!

The IBP has easily exceeded our early income goals … all while thoroughly thrashing the overall stock market in total return.

In other words, saying “so far, so good” would have been selling ourselves short.

Back in January 2018, we launched this real-money experiment with high hopes, yes, but also with reasonable expectations.

We would invest about $24,000 annually, through two $1,000 stock purchases each month. And based on conservative assumptions of 5% annual dividend growth and 2.5% overall yield, the goal was to build a portfolio that would generate at least $5,000 in annual income after 7 years.

Within the IBP Business Plan, we displayed a table to help illustrate how the income would increase using the anticipated growth and yield metrics. Note how it shows $5,272.39 in projected dividends at the end of 2024. 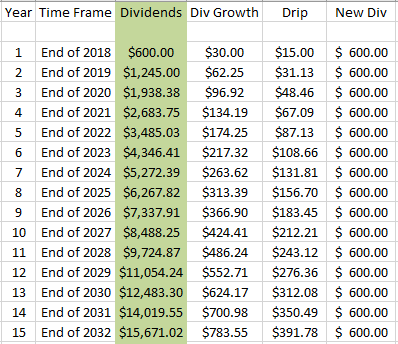 With 28 companies representing 9 sectors, the IBP’s projected annual income hit $1,356 by the time Q3 concluded — putting us well ahead of pace to reach our 7-year goal.

The following table shows the companies in the Income Builder Portfolio, how much income each produced from July through September, dividend yields as of Sept. 30, the annual dividend each company is expected to pay, the projected annual income of each position, and the the size of each holding’s most recent dividend raise. 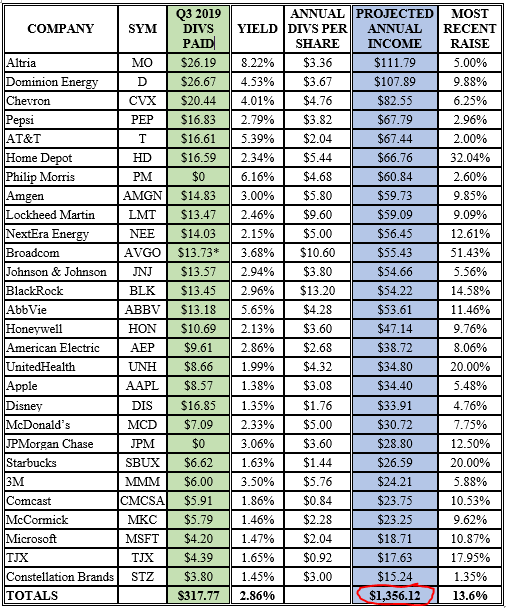 The companies are listed in order of “Projected Annual Income” based on each firm’s most recently announced dividend. That is a forward-looking figure.

For example, the last company we bought during this July-September stretch, JPMorgan Chase, recently announced a 12.5% raise in its quarterly dividend, to 90 cents/share.

Because 2018 was the first year of major U.S. tax-cut legislation, and because many companies used the windfall to boost their dividends, I expected good income growth in 2019.

I haven’t been disappointed.

The IBP is an active portfolio, with new money coming in twice a month and with all dividends being reinvested, so it’s impossible to do an apples-to-apples, year-over-year comparison. However, it’s still satisfying to see the significant rise in both quarterly dividends paid and projected annual income.

We have bought two stakes each of Altria, Dominion Energy, Chevron, Pepsi, Home Depot, Amgen, Lockheed Martin, NextEra Energy, Johnson & Johnson, BlackRock and Honeywell. That fact, combined with the relatively high (or at least 2%-plus) yields of each company, explains why those 11 rank in the top 15 in projected annual income.

The others we have double-dipped — UnitedHealth, Apple and Disney — are lower yielders.

Of the 14 stocks that have only been bought once so far for the portfolio, 5 paid dividends in both Q3 2018 and Q3 2019. Here’s a look at their year-over-year income growth.

Broadcom’s Q3 2019 dividend gets an asterisk here (and in the full-portfolio table earlier in this article) because it actually was distributed Oct. 1. In past years, it had been paid in September, so I included it in this quarter for the sake of consistency.

The Starbucks increase was deceptively small; it was caught between dividend raises due to the company surprisingly hiking its payout twice the previous year. I expect a typically robust increase to be announced soon.

Those comparisons aren’t especially meaningful because so much new money has come into the portfolio and so many additional investments have been made.

The best way to quantify total return is to compare the growth of each position to what the return would have been had the money been invested in an accepted proxy for the overall market — such as the SPDR S&P 500 Trust ETF (SPY). 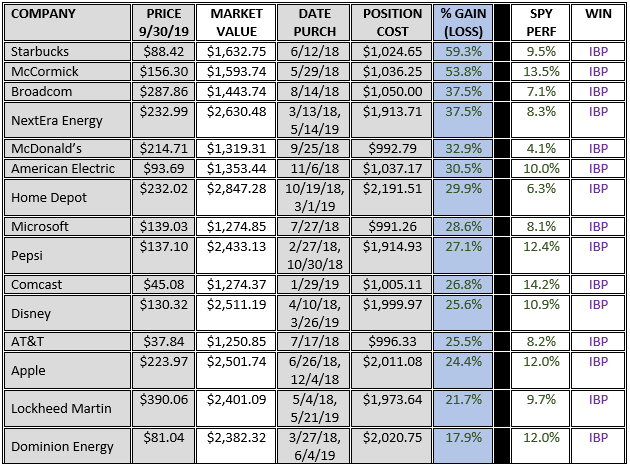 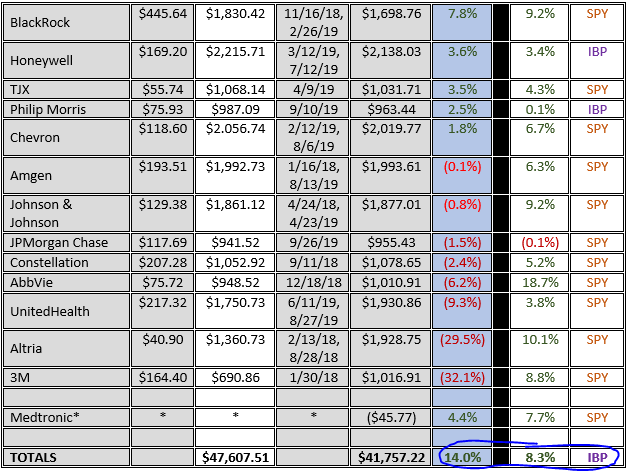 As the table above shows, the IBP has had a total return of 14% since its inception on Jan. 16, 2018. Had we bought shares of SPY on the exact same date that we bought each equity, the return (with dividends reinvested) would have been 8.3%.

That’s the very definition of “crushing the market.”

And even though building a reliable, growing income stream is the primary goal of the IBP, I’m pretty proud of that sizable outperformance.

The SPY data was acquired using the calculator at DividendChannel.com. The following example shows how I plugged in our McCormick investment date (May 29, 2018) to arrive at a total return for SPY.

Sharp-eyed readers might have noticed a slight discrepancy between what the Dividend Channel shows for MKC’s total return (54.82%) and what McCormick’s actual gain was within the IBP (53.8%).

That’s because Dividend Channel uses data from each day’s close of trading, while I bought MKC (and every other IBP position) during the trading day.

Obviously, the same would have been true for each buy of SPY, but I do believe this method does a good job of approximating the results.

While it’s plenty impressive that McCormick’s total-return percentage is 4 times that of the S&P 500 Index, McDonald’s wins this quarter’s SPY Crusher Award.

Eight times! Now that’s an occasion for a Happy Meal! 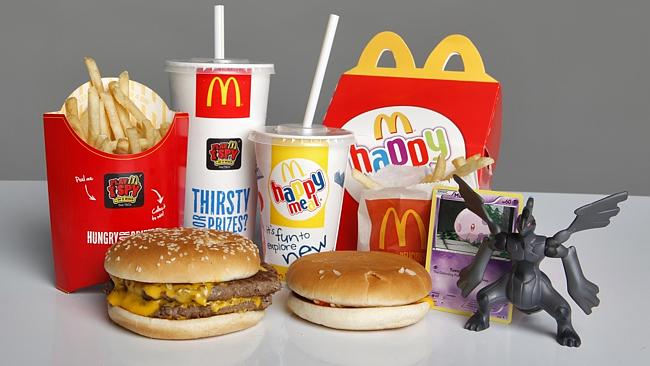 A few other notes regarding the total return table: 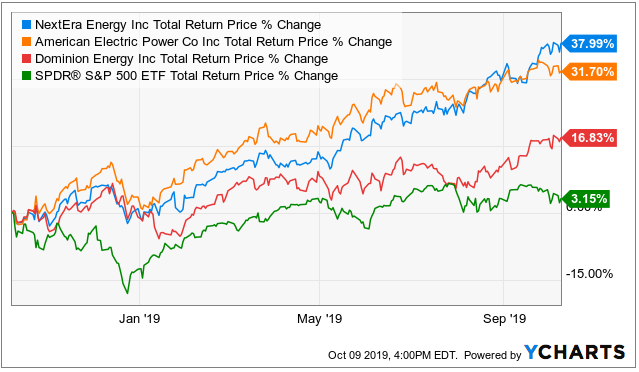 This Y-Chart illustrates how NEE, AEP and D have performed over the last year compared to SPY. Obviously, the IBP’s holding time of the three utilities has been either more or less than a year.

The following graphic from Simply Safe Dividends offers a good snapshot of where the Income Builder Portfolio stands at the end of Q3 2019: 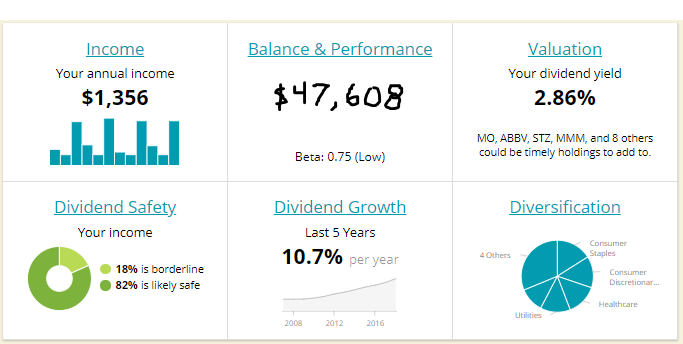 It’s been a pleasure to watch the IBP’s income stream grow and to see our companies dominate the market.

I look forward to seeing what’s in store for the rest of the year — and, for that matter, the decade to come.

Remember: The purpose of this endeavor was never to persuade investors to replicate the IBP, but rather to present portfolio-building concepts and interesting stocks for further research.