If you had purchased $10,000 worth of Microsoft (MSFT) stock on the last day of 1999, it would have taken nearly 16 years to get back to break-even — and that’s if you had reinvested all dividends along the way. 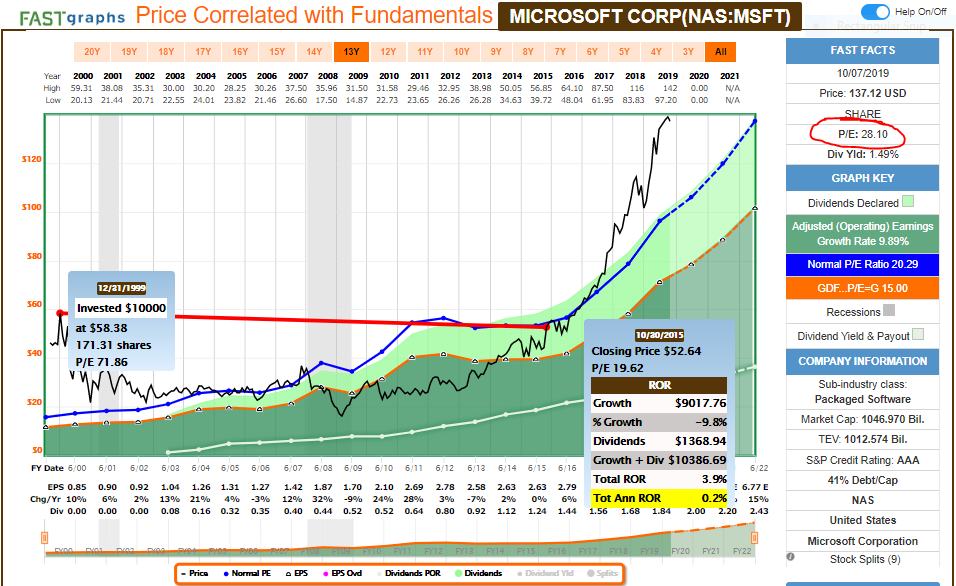 The above FAST Graphs illustration can serve as a cautionary tale when it comes to valuation: Even for a proven, blue-chip company, there can be a point at which the price an investor pays is simply too high.

Now, a lot went into what happened with Microsoft after ’99 — from the dot-com bubble bursting, to the Great Recession devastating the economy, to company management being too slow to recognize the changing environment of its industry.

Still, it didn’t help that a company that no longer was growing like gangbusters had a P/E ratio of nearly 72.

As you can see by the red-circled number on the upper right side of that FAST Graphs image, the software giant (and cloud-computing king) is currently trading at about 28 times earnings.

With the bull market now in its 11th year, is Microsoft again getting too hot to handle?

I sincerely hope not; I own quite a bit of MSFT, and the company also was our latest buy for DTA’s Income Builder Portfolio.

I’ll get back to valuation shortly, but first …

On Tuesday, Oct. 8, I executed a purchase order for 4 shares of MSFT at $137 apiece on Daily Trade Alert’s behalf; I also bought 7 shares of drugmaker AbbVie (ABBV) at $74 each.

A few notes about the buys detailed in the above graphic:

In my previous article, I happily reported that Schwab (the brokerage we use) eliminated most trading fees, and these buys were our first transactions in this lovely new zero-commission universe.

Before we resume our valuation discussion, let’s take a look at what professional stock-watchers have to say about Microsoft and AbbVie.

In general, analysts like both companies. Of the 33 polled by Thomson Reuters, 15 call MSFT a Strong Buy and 15 others say it’s a Buy.

The survey that Fidelity publishes shows considerable bullishness toward ABBV, too. 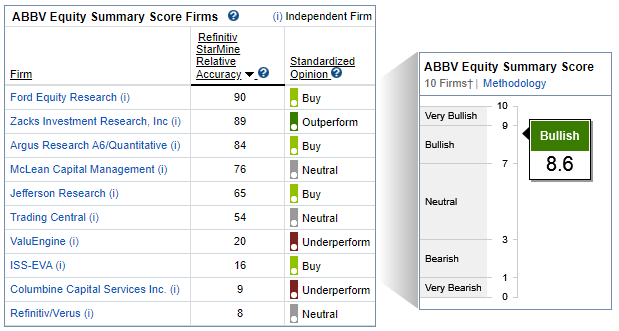 The above graphic also highlights Microsoft’s “quality quotient,” as it has received Value Line’s best grades in every category.

AbbVie gets only a middle-of-the-road 3 for Safety and an A for Financial Strength, but Value Line believes ABBV’s stock price has more room to run.

Even though Microsoft’s P/E ratio is more than three times as high as that of AbbVie, Morningstar Investment Research Center rates both companies as 4-star values (on the 5-point scale).

So, is Microsoft undervalued, as Morningstar claims … or overvalued, as the FAST Graphs image I used at the top of the article suggests?

Well, unlike many slow-growing consumer staples and utilities that have been bid up to similar P/E ratios as investors chase yield and perceived safety, Microsoft has been increasing earnings at quite a clip (yellow highlight below) and is expected to keep doing so (red circle). 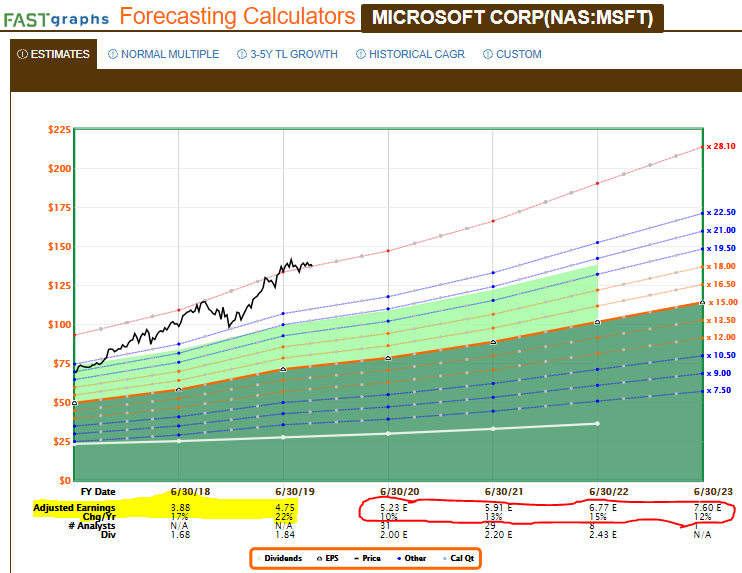 It’s a lot easier to justify paying 28 times earnings for a dominant company that is performing superbly.

And 28 is not even in the same galaxy as the ridiculous 72 P/E of 1999, thank goodness, so I am cautiously optimistic about Microsoft’s prospects.

AbbVie also has been growing earnings well, and it obviously is trading at a tempting multiple. But the company probably will need to demonstrate that it can produce another blockbuster drug or two before more major investors get really enthused. 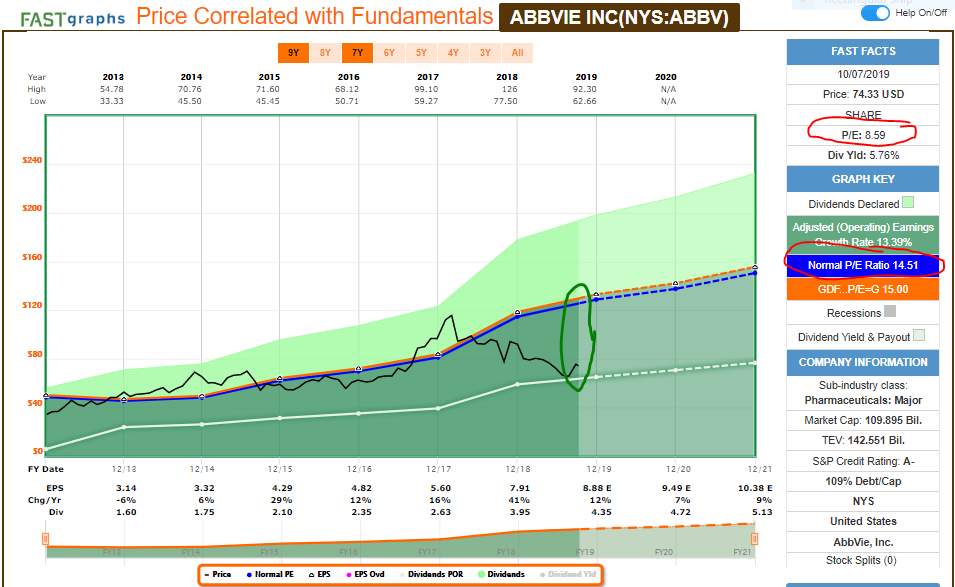 ABBV’s 5.8% yield is among the portfolio’s highest, while MSFT is one of our lower yielders at 1.5%.

With a quarterly dividend of $1.07, AbbVie’s 19.5267-share position will generate a $20.89 payout on Nov. 15. Because the IBP Business Plan mandates dividend reinvestment, that will buy about .28 of a share more ABBV.

At roughly the same time as that payment is made, AbbVie figures to announce its dividend raise for 2020.

The company has been increasing its dividend aggressively ever since it was spun off from Abbott Laboratories (ABT) in 2013. I like to err on the conservative side, so I’ll project a 9% hike to $1.17 — which would result in a February payment of $23.17.

AbbVie’s quarterly income isn’t much less than we expect Microsoft to produce over the next full year, but that’s A-OK. Even in a Dividend Growth Investing portfolio such as the IBP, a variety of yields are welcome.

And as the following McLean Capital Research graphs show, both companies’ dividends are covered easily by their free cash flow.

Whether large or small, the dividends all contribute to an income stream that just keeps growing and growing. No wonder we call this project what we do.

Although I do keep an eye on valuation, I am less obsessive about it when it comes to building a portfolio through smaller, regular buys.

I nonetheless believe Microsoft will justify its high P/E ratio, and I think AbbVie will thrive despite challenges from rival drug companies, regulators and politicians.

And hey, it also was pretty cool that we didn’t have to waste a single cent on brokerage commissions.

As always, investors should conduct their own due diligence before buying any stocks.