October opened with a stunning announcement from Charles Schwab, the founder and chairman of the giant investment company that bears his name: 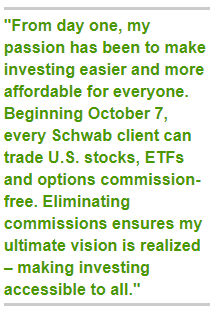 That’s right. Schwab, the world’s largest publicly-traded online broker, has cut the price of buying and selling stocks from $4.95 per transaction to $0.00.

Ah, $0.00 … my favorite price for anything and everything!

The announcement sent shock waves through the e-brokerage world. Several competitors — including TD Ameritrade and E*Trade — followed suit, even though losing revenue from commissions would cut deeply into their bottom lines.

While brokerage houses try to figure out what this will mean to their long-term futures, it is outstanding news for all who trade stocks and mutual funds — especially smaller investors.

Transactions totaling tens of billions of dollars take place every day on the New York Stock Exchange, with most being made by institutional investors, hedge-fund managers, and assorted zillionaires.

Sadly, I’m not quite a zillionaire, and I’m guessing you’re not, either.

Here at Daily Trade Alert, we launched the Income Builder Portfolio specifically with smaller investors in mind. As I said in introducing the IBP back on Jan. 9, 2018:

One kind of “DGI newbie” is the young person who is just getting started as an investor and believes Dividend Growth Investing could be the right way to secure his or her financial future.

Another is a person who has been investing for years, perhaps buying mutual funds in his or her 401(k) plan and IRA, but has decided to switch to an income-centric, individual-stock strategy. That investor could be in his/her 40s or 50s (as I was), or a much older person who is approaching retirement or already retired.

Twice a month, I research and select stocks for our real-money portfolio; then I buy those companies with the $1,000 that the folks at DTA make available for me to invest on their behalf.

The idea has been to make the kind of decisions and financial commitments that so many smaller investors face.

So far, our real-money portfolio has made 42 purchases, buying stakes in 28 companies.

Schwab just so happens to be the brokerage in which we have been building the IBP, and our next buy just so happened to be scheduled for Tuesday, Oct. 8 — the day after the new policy takes effect.

So I am celebrating this wonderful, new, zero-commission environment by adding to our positions in not just one but TWO companies:

Come Tuesday, I will execute purchase orders for about $500 worth of each stock.

Before this, I had never even considered splitting the buys because doing so would have meant the commissions would have been a full 1% of the purchases — and that seemed too high a price to pay for just a few shares of stock.

Now that the commission is my favorite price, I thought: “Why the heck not?”

Nothing Soft — Or Micro — About MSFT

We made our first purchase of Microsoft on July 27, 2018. It has been one of the IBP’s top performers, easily crushing the overall market since then. 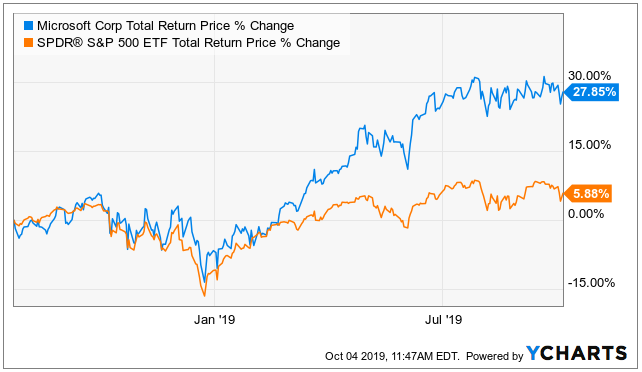 At the time of our buy, Microsoft was the world’s fourth-largest company by market cap, trailing Apple (AAPL), Amazon (AMZN) and Alphabet (GOOG). 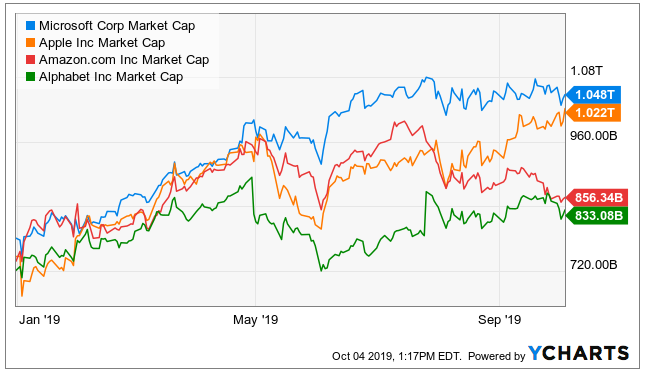 Microsoft has continued to execute well in all of its divisions, and the growth of its Azure cloud platform has been especially notable.

As Morningstar Investment Research Center said after yet another fine earnings report:

We believe wide-moat Microsoft is firing on all cylinders and remains a safe harbor in a sea of rich software valuations.

In addition to my 2018 article detailing the many reasons for my original selection of MSFT, I also chose Microsoft this past July as the answer to the question posed by my DTA editor: Which stock would you choose if you only could own one?

There are so many reasons I like Microsoft — including the AAA credit rating, the pristine balance sheet, the visionary management, the industry-leading services, and the growing dividend.

Because I already have discussed all of those (and more) in previous articles, I won’t repeat them here. Time to move on to the second company we’re buying Oct. 8.

AbbVie, the world’s largest biopharmaceutical company, has just about nothing in common with Microsoft.

Aside from the obvious — it’s a completely different business — AbbVie also has significantly underperformed, pays a much higher dividend and has a much lower price/earnings ratio.

Although I will thoroughly discuss valuation of both companies in my post-buy article, it’s worth mentioning that ABBV’s forward P/E is 8 and MSFT’s is 26.

In other words, while Microsoft investors are buying into momentum, AbbVie is a value play.

Since we bought ABBV for the Income Builder Portfolio on Dec. 18, it has been a laggard even as the overall market has advanced sharply. 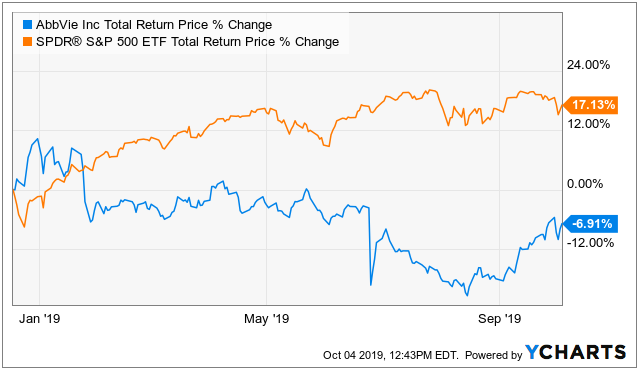 Many investors worry that the next few years will see Congress pass major health-care legislation, with a focus on significant drug-price reductions.

Additionally, there is concern that AbbVie relies far too much on wonder drug Humira, a subject I talked about at length in my first article about the company.

Morningstar, for one, says the wall of worry has grown too tall:

We continue to view the stock as undervalued, with the market underappreciating the company’s next-generation drugs, overly concerned about the United States’ loss of exclusivity for immunology drug Humira in 2023, and anxious regarding the leverage taken on for the Allergan acquisition.

As my previous writings indicate, I fully appreciate why some are bearish on AbbVie. However, I agree with Morningstar that there are many good reasons for investors to consider the company.

Some newer drugs have performed well, the pipeline includes very promising names, and the recent acquisition of Allergan (AGN) will bring proven products into the fold while improving revenues and cash flow.

My DTA colleague Dave Van Knapp wrote at length about ABBV when he selected it as his Dividend Growth Stock of the Month for March 2019.

One thing Dave mentioned prominently was the dividend, as ABBV is one of the best income-producers in the Health Care sector.

Since getting spun off from Abbott Laboratories (ABT) in 2013, AbbVie has made growing its dividend one of its priorities.

The above graphic illustrates the impressive growth, which I updated to include the projected full-year payout for 2019.

The combination of that rapidly increasing dividend and AbbVie’s struggling stock price has resulted in a yield just under 6%.

Microsoft also has a solid, growing dividend. But its skyrocketing price has pushed the yield down to about 1.5%. 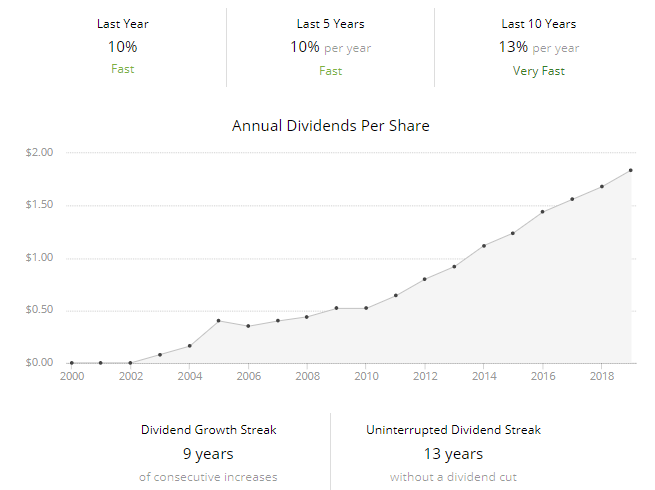 As I continue putting together the Income Builder Portfolio, selecting two stocks at once will not be the new normal.

I simply felt that given the big zero-commission news, this was a great opportunity to show how the elimination of trading costs can — as Charles Schwab said — “make investing accessible to all.”

Even to those with only hundreds, rather than zillions, of dollars to invest.

I had been wanting to add to both the MSFT and ABBV positions, anyway. Given Microsoft’s rich valuation and AbbVie’s challenges, being able to do so in smaller increments this time seemed prudent.

My article chronicling the purchases and discussing valuations in depth will be published on Wednesday, Oct. 9.

(Disclosures: I own MSFT in my personal portfolio; also, my son-in-law is a software design engineer in Microsoft’s gaming division.)