I have been investing in individual stocks for 20 years, and I have never owned shares of any American bank.

When I started in late-1999, I was buying up “can’t-miss winners” from the dot-com era … because none of us possibly could lose doing that, right? (Note to WorldCom, Palm, AOL and Pets.com: I want my money back!)

After the dot-com bubble burst in 2000, I meekly shifted back to mutual funds. When I was ready to buy a few stocks again, the world was in the late stages of the Great Recession, and banking was industria non grata for its role in the financial crisis.

(Smart investors actually were buying beaten down U.S. banks then, but I was too inexperienced and too cautious at the time.)

By the time I discovered Dividend Growth Investing about 8 years ago, the current bull market already was well underway.

Nevertheless, pundits regularly cautioned that the bear was lurking right around the corner … and I wasn’t going to get sucked in by banks.

Fast-forward to the present: The industry has consolidated significantly, and the strongest banks not only have survived but thrived — as have many investors who bet on them.

Which brings us to my next selection for DTA’s Income Builder Portfolio: the largest, and arguably the best, bank in the United States. 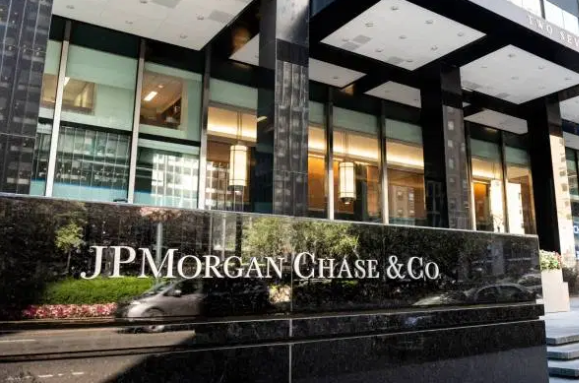 Come Tuesday, Sept. 24, I will execute a purchase order on behalf of Daily Trade Alert for about $1,000 worth of JP Morgan Chase (JPM).

Why A Bank, And Why Now?

JP Morgan Chase will be the IBP’s second component from the Financial sector — joining BlackRock (BLK), the world’s largest asset-management company, which we have acquired in two separate purchases. (The most recent buy is detailed HERE.)

I am always on the lookout for fairly valued, high-quality, dividend-growing companies for this portfolio, and JPM qualifies in every way.

It has received Morningstar’s top rankings for competitive economic advantage (Wide Moat) and management (Expemplary Stewardship); it has a solid A- Standard & Poor’s credit rating; and it is yielding 3% after its just-announced 12.5% dividend raise.

JPM is performing well in metrics such as earnings growth and return on equity, as shown in the following graphic from Simply Safe Dividends.

Although I am not about to load up the IBP with banks, I decided that excluding JP Morgan Chase just because of what happened in the Great Recession would have been foolish.

Besides, JPM emerged from that crisis in great shape, recovering more quickly and completely than its peers while also outperforming the S&P 500 Index. 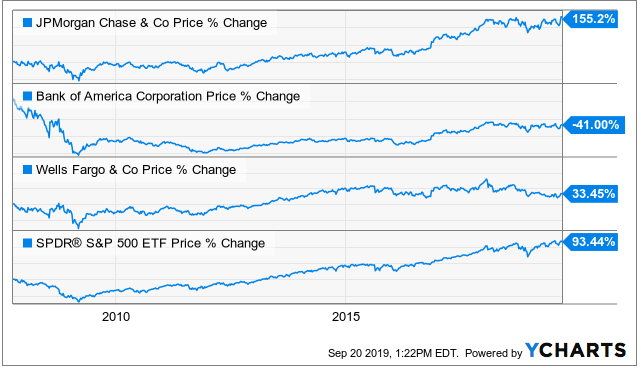 Wells Fargo (WFC) was rebounding nearly as well as JPM before it got caught in a multibillion-dollar accounts-fraud scandal in 2016 — a horrific breach of trust that is still weighing on the company.

My DTA colleague, Dave Van Knapp, took an extremely comprehensive look at this financial conglomerate only a few months ago. So rather than repeat what he said, I call your attention to what he wrote: HERE.

Since Dave’s fine article was published, a few things worth mentioning have taken place.

First, there was the second-quarter earnings report, on July 16, during which JP Morgan Chase announced it had easily beaten estimates for both profits and sales. Said CEO Jamie Dimon:

We continue to see positive momentum with the U.S. consumer – healthy confidence levels, solid job creation and rising wages – which are reflected in our Consumer & Community Banking results. Double-digit growth in credit-card sales and merchant-processing volumes reflected healthy consumer spending and drove 8% growth in credit-card loans, while mortgage and auto originations showed solid improvement, and we continued to attract new deposits, up 3%. Client investment assets were up 16%, driven by both physical and digital channels. 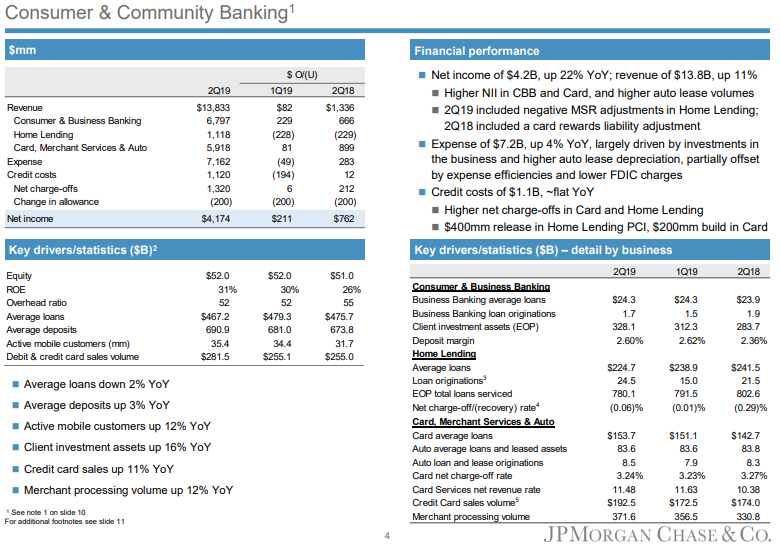 Also of note since Dave Van Knapp’s JPM writeup: The Federal Reserve made two quarter-point cuts to its benchmark short-term interest rate, which is now in the 1.75% to 2% range.

The market has priced in continued easing, but the Fed is sending mixed signals; several board members have publicly stated they believe there should be no more reductions.

It could get interesting, especially with Donald Trump getting ever nastier as he tries to bully Fed chairman Jay Powell to cut the rate all the way to 0%.

Our NII will be a little bit lower than what we told you last time. I think we told you $57.5 billion, probably even closer to $57 billion at this point for this year, so you’re only talking about two quarters. And obviously you got to worry about the long run effect of those interest rates, but it’s hard. So there are businesses it doesn’t affect at all. And maybe we have to do a better job describing this to you. And there are businesses where it just sucks into your margin. There’s very little you can do about it.

The other relatively recent bit of news is far more cheery: JPM raised its quarterly dividend a dime to 90 cents, starting with the Oct. 31 payment.

Like its peers, JP Morgan Chase cut its dividend during the recession. Unlike the others, though, it has grown its distribution aggressively over the last decade.

Wells Fargo kept up with JPM for awhile, until the scandal put the brakes on WFC’s dividend growth, and Bank of America (BAC) is still paying out considerably less than it did in 2008. 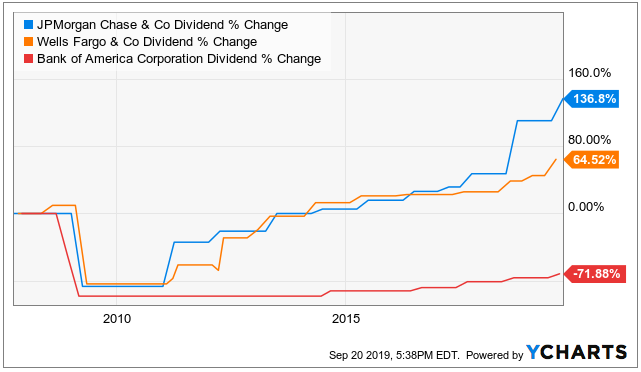 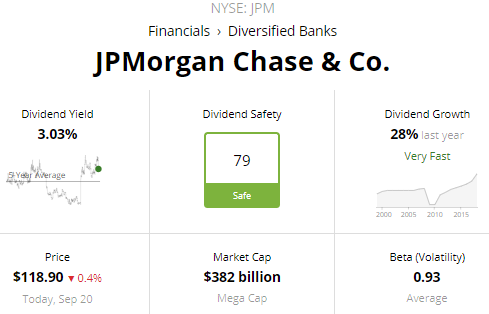 I actually considered selecting WFC as a turnaround play, but I decided — as I almost always do when picking stocks for the Income Builder Portfolio — to go with the higher-quality, more fundamentally sound company.

There will be a next recession; there always is. And when it hits, bank stocks very well could be punished again.

For long-term investors and DGI proponents, however, there is solace in owning the best of any industry. So I’m comfortable making JP Morgan Chase the IBP’s 28th position.

In my next article, to be published on Wednesday, Sept. 25, I will provide details of our JPM purchase, and also will discuss valuation and other pertinent information.

As always, investors should conduct their own due diligence before buying any stock.