Every stock purchase is a bet, of sorts.

An investor “gambles” that the company will continue to perform well or, in the case of a corporation that has been struggling, that it will overcome whatever adversity it has been facing.

With Dividend Growth Investing — the primary strategy I use in putting together DTA’s real-money Income Builder Portfolio — the main “wager” is that the business will grow earnings and free-cash flow consistently enough to keep raising its dividend for years (or, better still, for decades).

Taking a deep dive into fundamentals, researching history, checking out analysis from respected sources, and making realistic, data-based projections about the future … doing all of that can help put the odds in an investor’s favor.

Although all investments carry risk — something I discuss in every article about the stocks we buy — I like to think I haven’t made outlandish wagers on any of the 26 companies I have selected for the IBP.

Come Tuesday, Sept. 10, the portfolio will have 27 positions, as I will execute a purchase order for about $1,000 worth of tobacco giant Philip Morris International (PM).

And yes, I’m fully aware that this might be a somewhat more speculative bet than other IBP choices have been.

Last week, word started circulating on Wall Street that Philip Morris and Altria (MO) were talking about a “merger of equals” — or in their case, a most unusual re-merger of equals. Back in 2008, MO spun off PM to handle all international business, leaving Altria to focus on its U.S. operations.

Both companies thrived for about a decade before stronger headwinds — most notably, reduced cigarette usage and increased governmental regulations — started concerning investors and driving down the price of both stocks from the all-time highs each established in mid-2017. 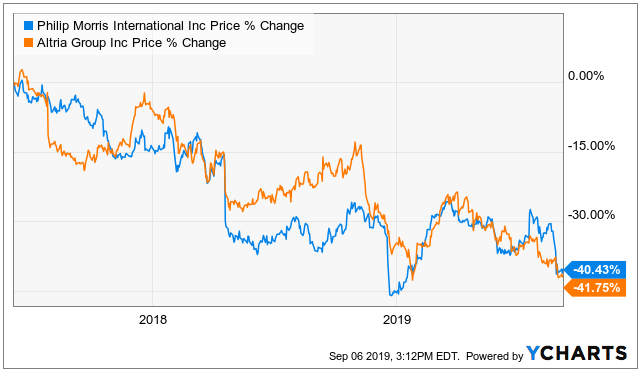 At first, Philip Morris fell hardest; more recently, however, investors generally became more bullish about PM’s prospects due to that company’s successful development of the IQOS heated-tobacco product and often laxer regulations in many international markets.

But when the rumors surfaced August 26 about Philip Morris and Altria reuniting, investors, apparently concerned that MO would drag down PM, dumped PM stock and the price fell from $81 to $77.73. 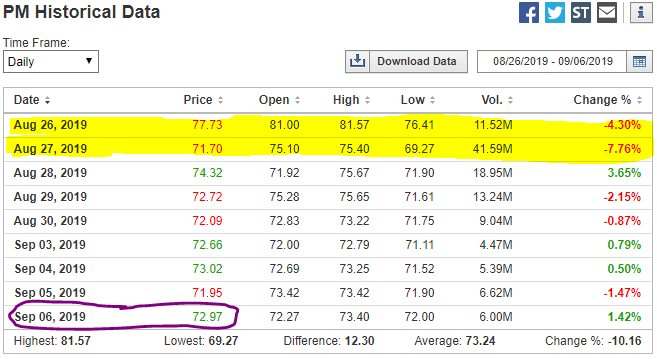 The companies acknowledged the very next day that the PM-MO reunion indeed was being discussed, and PM shares plummeted nearly 8% to $71.70. More than 41.5 million shares moved — nearly 7 times more than a typical trading day’s volume for Philip Morris stock.

Since then, the price has stabilized as the market has digested the news, and PM finished the week at $72.97.

Although I will discuss Philip Morris’ valuation thoroughly in my post-buy article, suffice it to say that analysts consider this to be a pretty darn attractive entry point.

Would The Merger Benefit PM?

I believe the answer to that question is, in a word, yes, and I agree wholeheartedly with Morningstar Investment Research Center analyst Philip Gorham’s take:

Frankly, we do not understand the market’s negative reaction to the news that Philip Morris International and Altria are in talks regarding a potential all-stock merger of equals. The 8% decline in the market value of PMI is particularly surprising. … It has been our long-held view that this combination would occur, primarily to align the interests of both parties in the distribution of iQOS in the U.S., but also because of the potential for cost synergies, the ability to manage the world’s largest cigarette, heated tobacco and vaping brands under one roof, and for PMI, the natural foreign exchange hedge that U.S. distribution will bring.

The Income Builder Portfolio also owns Altria. Unfortunately we bought our MO stake (in two 2018 transactions, about 6 months apart) when there was more optimism about the company, and it has been a major laggard with a total return of minus-24%.

The one bright spot for MO is that its dividend has continued to rise.

Factoring in its recently announced 5% hike — marking the company’s 50th consecutive year of dividend growth — Altria is yielding a robust 7.7%

MO not only is the IBP’s highest yielder, it also is our portfolio’s top income producer.

Based on everything I have read, the sentiment seems to be that MO’s dividend could be frozen or even reduced after the merger. Certainly, the 10% annual pace of raises the past five years will not continue.

However, that could work in favor of Philip Morris investors, as the yield of the combined company could be higher than PM’s current 6.2% figure.

Therefore, adding a PM position to our MO position could provide a little “yield insurance” for the portfolio.

What If The Merger Gets Nixed?

All kinds of things can happen when any companies try to merge — let alone major businesses in a controversial industry, such as Philip Morris and Altria.

As PM’s own press release says:

Simply stated, there are a lot of moving parts. And if it ends up being that the reunion never happens, I believe PM’s share price will get a nice boost.

Above all else, Mr. Market hates uncertainty. Status quo probably would be applauded.

So whether the merger goes through or not, I think buying some PM now falls under the “reasonable bet” category.

A Little More About Philip Morris

Above and beyond the possibility of rejoining Altria, Philip Morris is a well-run, innovative,  evolving, money-making operation.

During its second-quarter earnings call July 18, the company revealed 37% year-over-year growth in IQOS shipment (countering a 3% decrease in cigarette shipment); significant revenue growth in Europe and Asia; and improvement to its operating income margin.

Philip Morris also raised its full-year guidance, which Mr. Market cheered that day to the tune of an 8.2% rally that pushed the price near $90.

The considerable investment PM has made in IQOS obviously is paying off, as usage is skyrocketing and the company is dominating the competition. 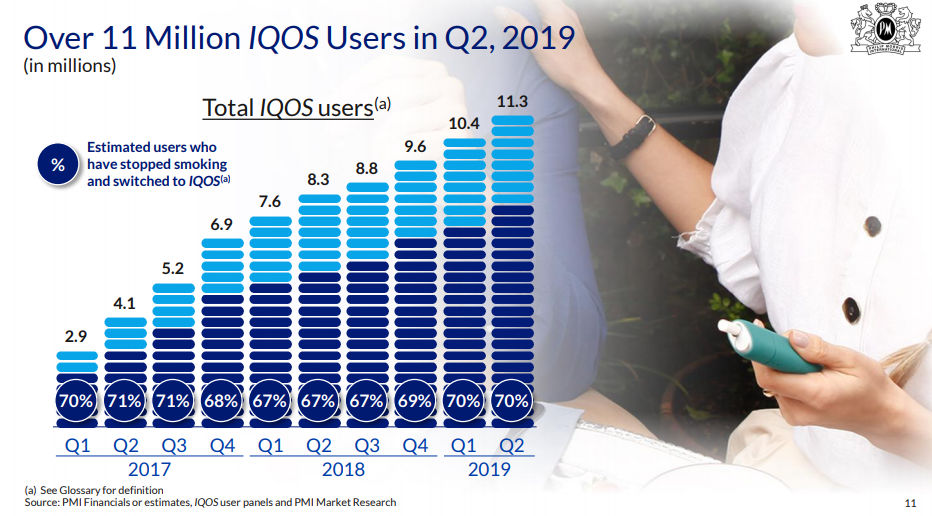 No wonder Altria management was giddy when the FDA recently approved IQOS for sale in the United States.

For Philip Morris, it has gotten to the point where the company is actively stating its goal is to — GET THIS! — eliminate cigarette smoking entirely.

Here’s the pitch, as stated on pmi.com: 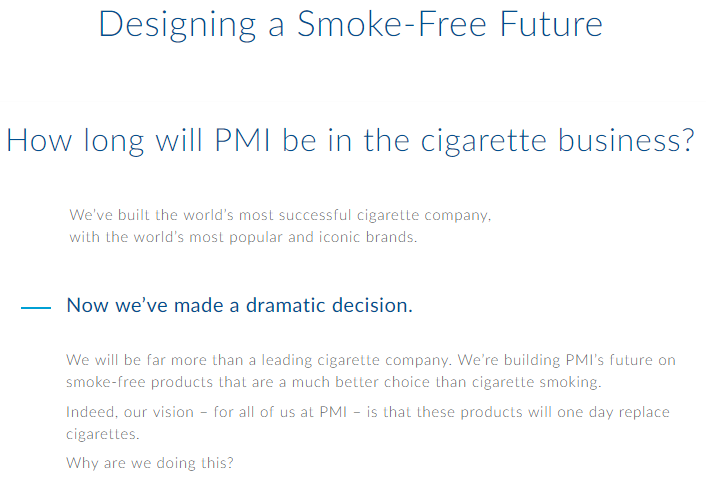 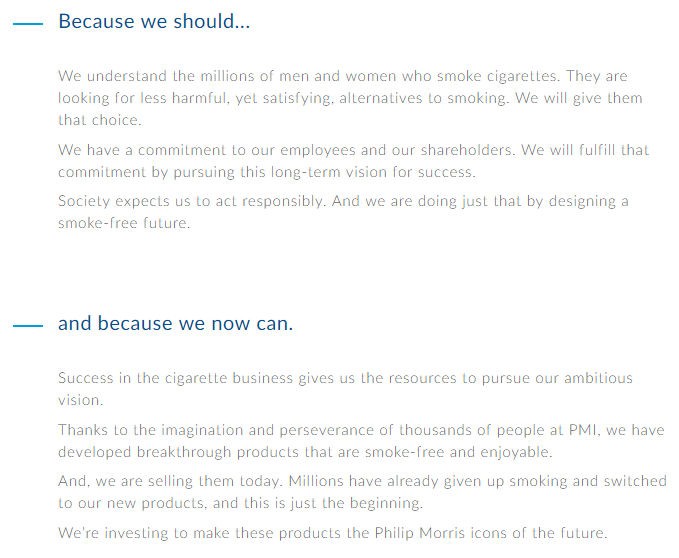 Of course, cigarette companies spent decades lying about their intentions and the danger of their products, so you wouldn’t be blamed for being more than a little skeptical.

Still, it’s impressive that a major, blue-chip company has put itself out there as being willing to change its very essence to remain relevant — and that it seems to have the financial and intellectual wherewithal to do it.

Like most investors, I’m not totally comfortable “betting” real money on a company facing so many question marks.

Nevertheless, buying an A-rated, wide-moat business when it has fallen out of favor often has been a recipe for long-term investing success.

Whether or not Philip Morris International completes its reunion with Altria, I believe PM will be a quality addition to the Income Builder Portfolio for years to come.

In addition to analyzing the stock’s valuation, my next article — to be published Wednesday, Sept. 11 — will comprehensively examine PM’s dividend.